All over Los Angeles, Teslas zoom and electric scooters zip. Now the latest electric vehicle to pop up on streets is the e-bike.

While some purist cyclists may sniff that getting a power assist is cheating, that hasn’t stopped Ellen DeGeneres, Jay Leno, Gene Hackman (spotted buying one in Sante Fe, New Mexico) or William Shatner (who tells THR, “The older you get, the bigger a fan you become of electric bikes”) from embracing them for commuting and running errands. Younger fans include Miley Cyrus, Leonardo DiCaprio and Vin Diesel, who got one as a gift from his Fast and Furious 8 director F. Gary Gray, while Elon Musk keeps four in his garage and Arnold Schwarzenegger took a Haibike e-bike to Hungary last year while filming the latest Terminator sequel. Starting at the end of 2018, dockless e-bikes began appearing in Santa Monica and L.A., most noticeably orange bikes from Jump, a company owned by Uber.

Eric Busch, vp environment, health and safety at Sony Pictures Entertainment, rides his electric Pedego bike to work the 10 miles from his home in El Segundo half the days of the year, significantly reducing his carbon emissions and spending on gas. “It’s such a brilliant way to commute. I’m riding in a button-down and slacks or jeans, and I get a bit of exercise — but I’m not getting to work sweaty,” says Busch, who also owns an electric bike shop, Electric Bikes LA, in El Segundo with his wife, Andrea. On weekends, “we’ll pick a place to go like getting sushi in Marina del Rey, and you get this beautiful bike ride on your way,” he says.

A good part of the appeal for Shatner is helping save the planet. All the times that he bicycles from his home to his office means he’s not creating carbon emissions. “Every coastal city is facing either annoyances or inundation, and what we’ve done from the top of the government down is bury our head in total denial,” says the actor.

For screenwriter-producer Mitch Klebanoff (Beverly Hills Ninja), the appeal is getting a workout on inclines. “I love biking, but I’m not the kind of biker who can go up a long uphill, so an electric bike works for me,” says Klebanoff, who lives at the edge of Griffith Park and likes to peddle up to the Observatory. “That’s a tough ride. Without the bike, I wouldn’t get to take advantage of the park.” He sometimes bikes to Hollywood’s NeueHouse for writing sessions, and because his Tern-brand bike is foldable, he can pack it into his car for trips out of the city.

While e-bikes are still relatively niche — in 2017, just over 250,000 were sold in the U.S. compared with 13 million “regular” bicycles — they are one of the fastest-growing segments, though Trump tariffs instituted early last year (many components are manufactured in China) impeded 2018 sales.

“China is the only source of most of the major components, as well as the bulk of the complete bikes. There is no comparable manufacturing in the USA. So nothing except higher prices for the USA consumer resulted,” says eCycleElectric’s senior managing director, Ed Benjamin. Nevertheless, e-bikes sold “even at the higher price.” Helping the e-bike movement: In 2015, California passed a bill “to really legalize various classes of e-bikes and really remove all the ambiguity about whether e-bikes were legal. We now have 11 states that have adopted legislation,” says Larry Pizzi, president of Accel North America, which owns such brands as performance-oriented Haibike (DeGeneres is a fan) and recreation-focused Raleigh. He adds that “the industry is seeing sales doubling on a national level year over year for the last few years.”

Quality e-bikes start at $1,500 and can rise to $7,000 to $10,000 for top models from brands like Riese & Muller (which are hand built and can be made to custom specs) and Haibike (which offers models in lightweight carbon). Other brands to know about include Story Bikes (which made Oprah Winfrey’s most recent O list), Vintage Electric (featured by Jay Leno on his Jay Leno’s Garage series), Rad Power Bikes and ProdecoTech.

There are two types: pedal assist with throttle (featuring a setting that allows the bike to do all the work) and pedal assist only: “With peddle assist, you can’t just push a button and go. You have to pedal,” says Ed Begley Jr. “You can set the bike to a low amount of assist or, if I’m in a rush and I’m trying to get errands done, I’ll put it on higher assist.” The actor and environmental activist says he now uses his Pedego bike more than his electric car. Most e-bikes can hit speeds of 16 to 28 mph, go about 20 to 50 miles on a single charge, and can be plugged into a regular 110-volt outlet and fully recharge in about three to six hours. With “almost all bikes, you can remove the battery and just carry it into the office and recharge it,” says Busch. 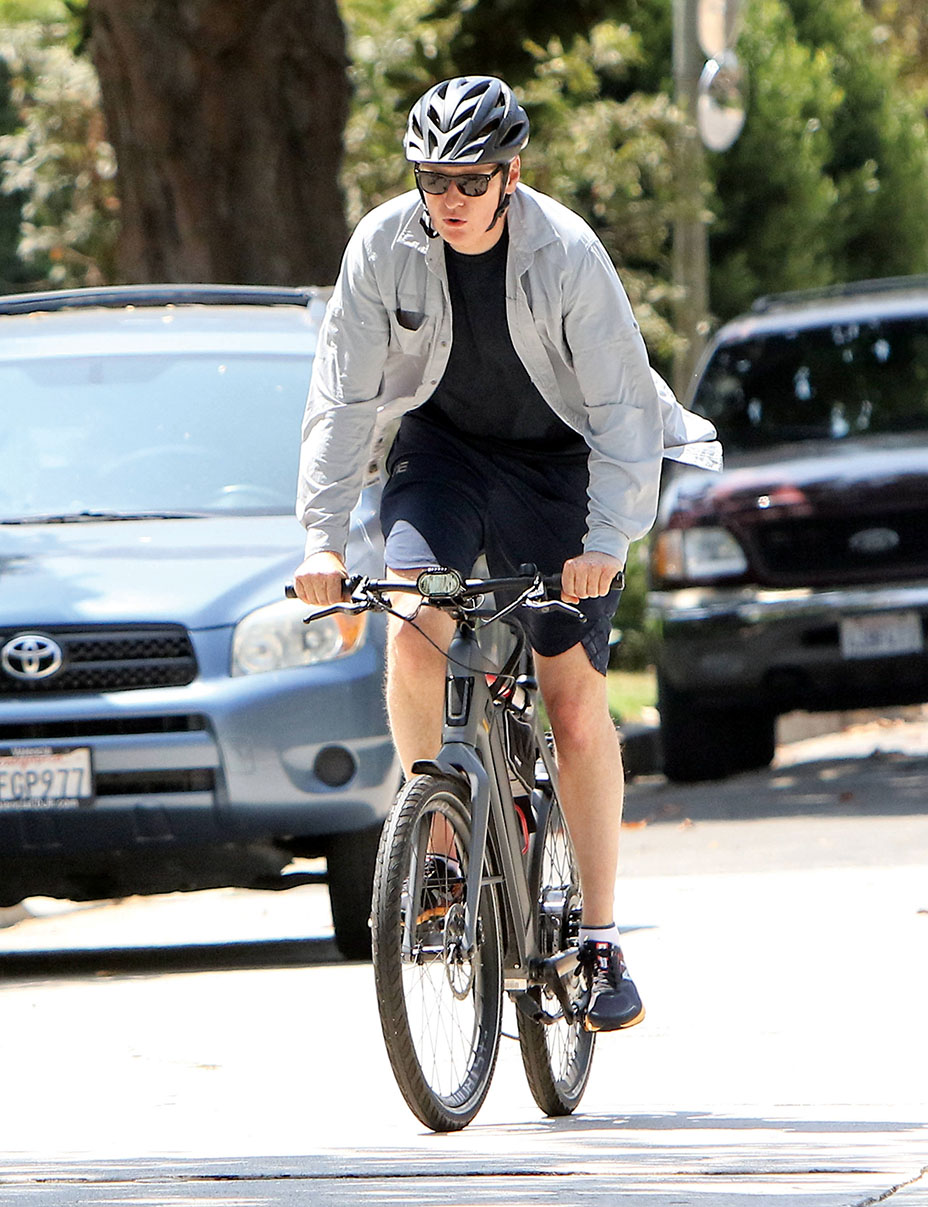 While many L.A. adherents like the bikes because they enable them to navigate clogged streets (“When cars are stuck in gridlock, you can maneuver through [and] sometimes beat traffic,” says Pete Prebus, founder and editor of Electric Bike Report), at least one e-bike lover admits that age is a factor as well. “It appeals to me at age 69,” says Begley. When he first got his bike about seven years ago, he didn’t ride it much. “I thought, ‘I don’t need an electric motor.’ ” After he started using it for errands, “I began to think this motor is kind of good because this hill is kind of steep, and bit by bit I fell in love with the bike.”

Pedego, which says SoCal represents 30 percent of its market, specifically targets the 50-plus demo, with William Shatner, 87, as its spokesman. “It happened organically,” says CEO Don DiCostanzo. Explains Shatner: “I saw Pedegos in my local [North Hollywood] store and said, ‘This is what I need,’ and then I met the company people.”

In exchange for two bikes that DiCostanzo personally delivered, the CEO requested “one picture that I can use for one year.” We got to know each other. They used those bikes for about a year and then they wanted to upgrade to newer models.” The Shatners and Pedego agreed to the same deal for another 12 months. Five years later, “Mr. Shatner said, ‘I want Pedegos for my family’ ” of 14; DiCostanzo replied, “I want a video.” A new deal was struck.

In 2018, in return for the actor filming commercials at Universal Studios, Shatner received company warrants or stocks. Says the CEO: “Bill told me it’s the one thing his whole family, including his 14-year-old granddaughter, can do together and enjoy.” Adds Shatner, “My family meets on a regular basis and goes bicycling somewhere — San Diego, Santa Barbara, into the mountains. It’s been a real boon to family togetherness.”

Anatomy of an E-Bike Endorsement Deal 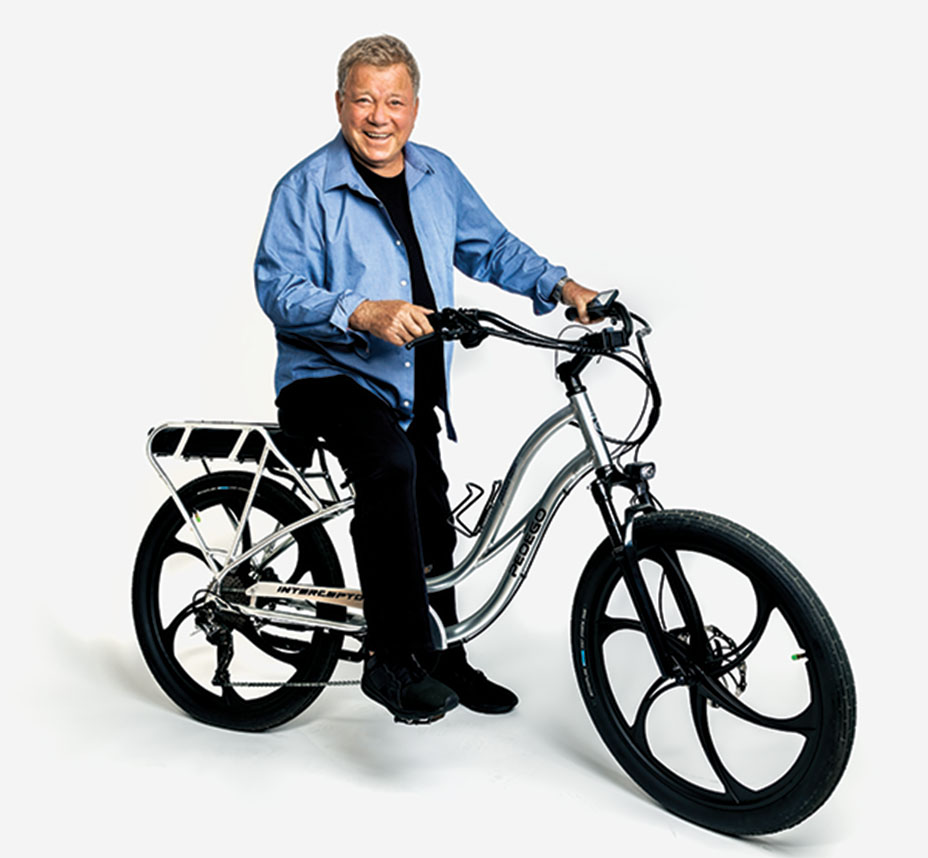 Pedego, which says SoCal represents 30?percent of its market, specifically targets the 50-plus demo, with William Shatner, 87, as its spokesman. “It happened organically,” says CEO Don DiCostanzo. Explains Shatner: “I saw Pedegos in my local [North Hollywood] store and said, ‘This is what I need,’ and then I met the company people.” In exchange for two bikes that DiCostanzo personally delivered, the CEO requested “one picture that I can use for one year.”

Six years later, “Mr. Shatner said, ‘I want Pedegos for my family'” of 14; DiCostanzo replied, “I want a video.” A new deal was struck. In 2018, in return for the actor filming commercials at Universal Studios, Shatner received company warrants or stocks. Says the CEO: “Bill told me it’s the one thing his whole family, including his 14-year-old granddaughter, can do together and enjoy.”