For some of the entertainment industry’s biggest stars, their time on the top of the call sheet has far outlived their mortal lives.

Some celebs seem to be thrilled with their ongoing fame. Actor Clifton Webb is said to have willed himself to become a ghost in his beloved home on Rexford Drive. “I’m not leaving this house — even in death,” he told a friend shortly before his death in 1966.

It seems the irascible Webb held true his word. According to the book Hollywood Haunted: A Ghostly Tour of Filmland, in the 1960s, gossip columnist Joyce Haber and producer Douglas Cramer (The Brady Bunch, The Odd Couple, Love Boat) moved into Webb’s former home — and over the years, the Hollywood power couple experienced many unsettling occurrences. While sitting by the pool, they would see a dark shadow in “the size and shape of Clifton” in the master bedroom. A disembodied voice would sigh Webb’s catchphrase, “Well, well.” Webb’s mother, Maybell, seems to have haunted the house, too, and her shadow was often seen in certain rooms.

Other deceased entertainment industry titans also can’t quit working. Man-of-a-thousand-faces Lon Chaney was long said to haunt Stage 28 at Universal Studios (demolished in 2014) where he filmed Phantom of the Opera, running the catwalks as his Phantom cape was tied firmly around his neck. Karen Carpenter has been spotted in the recording studios of what is now the Jim Henson Company lot. and Oscar-winning costume designer Edith Head has been seen sewing away in her workshop at Paramount Studios.

Even William “Billy” Wilkerson, founder of The Hollywood Reporter is rumored to haunt the old THR offices on Sunset Blvd. Construction workers have reported spotting the ghostly Wilkerson pacing the halls and working at a desk, trying to beat a self-imposed deadline.

But the ghosts that pop up again and again seem to mainly be those left unfulfilled, those whom the public feel died before their time. “If somebody dies suddenly, like, say Michael Jackson or Marilyn Monroe or Valentino or James Dean,” says Scott Michaels from Dearly Departed Tours and Artifact Museum, “then it’s a real shock to the system. And people don’t want to let those celebrities go. You really feel like you can reach in and possibly help them or have them to yourself in the afterlife. It’s such a bizarre thing, people get so possessive about celebrities.”

As a way to cope, Michaels believes fans and co-workers manifest or create these ghostly legends as a way to deal with the trauma of their idols’ untimely deaths. For these three tragic Hollywood all-stars, there is no resting in peace, but rather everlasting attention. However, Michaels warns to take all these sightings with a big grain of commerce, because famous ghosts are good for business. “When it comes to Hollywood, everyone wants their place to be haunted by a celebrity,” Michaels says. “If people really do haunt where they say they haunt, they’d be much busier now than they were when they were alive.” 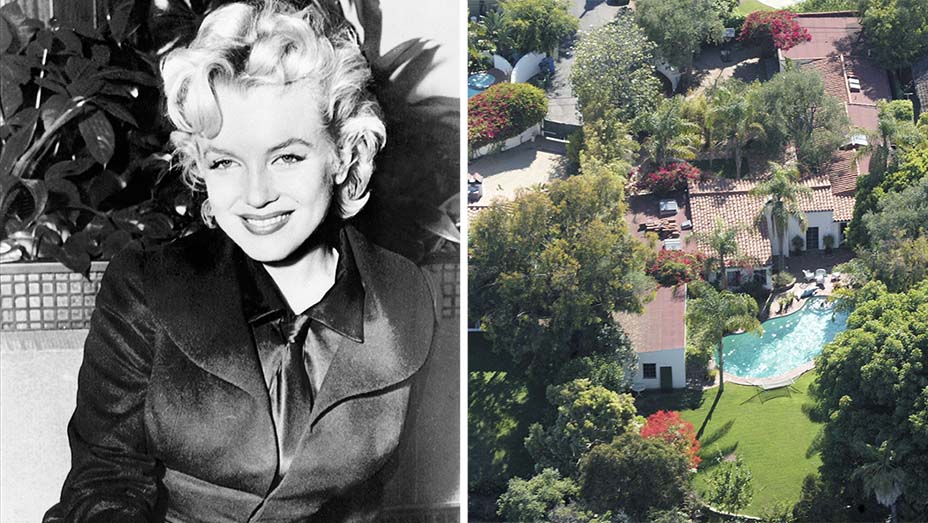 Since the 32-year-old superstar’s tragic overdose in her Brentwood home on Aug. 5, 1962, Monroe’s spirit has been hounded as much in death as she was in life. “She is number one,” Michaels says of the number of sightings. “She’s the holy grail of ghosts, if you will.”

Monroe’s ghost has been spotted everywhere — in the home where she died, sitting wistfully on a bench at The Hippodrome on the Santa Monica Pier and in the full-length mirror once in Suite 246 at the Roosevelt Hotel, where she has also been seen dancing. “She’s been seen in almost every ladies’ room in town,” Michaels says with a laugh. “From the Knickerbocker to the El Capitan and to the Hollywood Roosevelt.”

At Monroe’s marble crypt in Westwood Village Memorial Park, visitors — who often kiss the spot where she is buried with bright red lips — have seen a heavy, pink-covered mist that they believe to be her spirit. Michaels says Monroe is the best example of deceased celebrities to whom fans feel a profound and protective connection.  “A lot of it goes back to Marilyn,” he says, “because Marilyn is why a lot of us are here.” 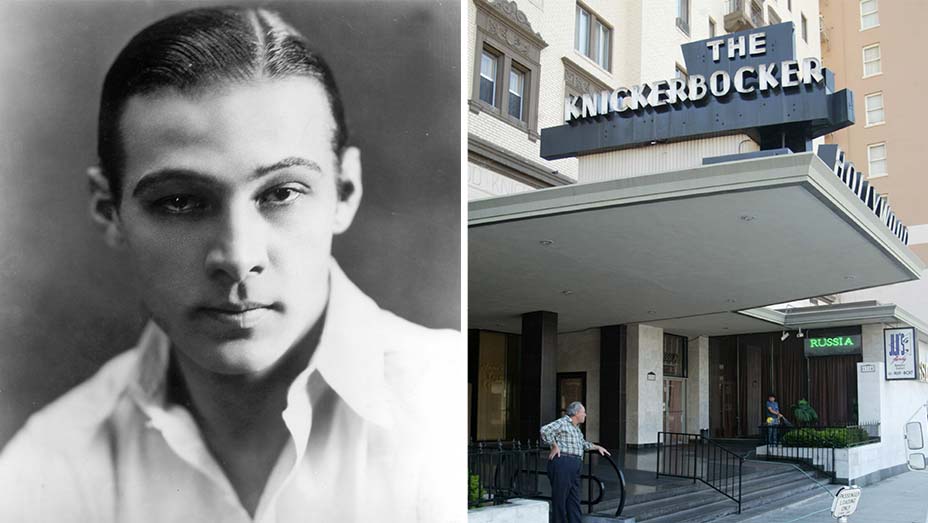 Although Hollywood’s original sex symbol died of pleurisy at 31 on Aug. 23, 1926, his ghost is still said to set hearts aflutter all over town.

Valentino’s spirit has allegedly been sighted at his Falcon Lair mansion in Beverly Hills (which is also possibly haunted by its later resident, the tragic heiress Doris Duke). Socialite Millicent Rogers even claimed that she was chased out of Falcon Lair one evening by Valentino’s ghost.

But for the character actor Harry Carey, what seemed like a continual haunting would turn out to have purely earthly origins. According to Carey, soon after he and his young family rented Falcon Lair in 1930, they were tortured by blinking lights and loud noises they believed were Valentino’s unsettled spirit.

However, Carey soon discovered that a caretaker obsessed with the paranormal Valentino legends had rigged the home’s electric wires to set off blue and green lights, and thus further the myth of the ghost of the “great lover.” As a relieved Carey told one reporter; “We seem to have solved that mystery.”

As soon as one haunting was dispelled though, another popped up. Valentino’s spirit has been spotted at the Knickerbocker Hotel, his beach house in Hollywood Beach, the 1920s downtown hotspot Hotel Alexandria, the bathrooms at Musso and Frank Grill, and his old apartment —now known as Valentino Place — in Hollywood. The Sheik has also been seen at Paramount Studios and the adjacent Hollywood Forever Cemetery, where he is interred in less-than-royal fashion.

“He originally was supposed to have a really grand mausoleum,” Michaels explains. “His agent-friend June Mathis put him in a temporary crypt that belonged to her until his could be constructed. But it ended up not being constructed and he ended up staying there. He’s got a very, very modest crypt for someone like Valentino … So, there might be an element of …discontent.”

Another discontented spirit is Valentino’s beloved dog Kabar, whose spirit is said to still howl for his lost owner both at Falcon Lair and the Los Angeles Pet Cemetery in Calabasas where he is buried. 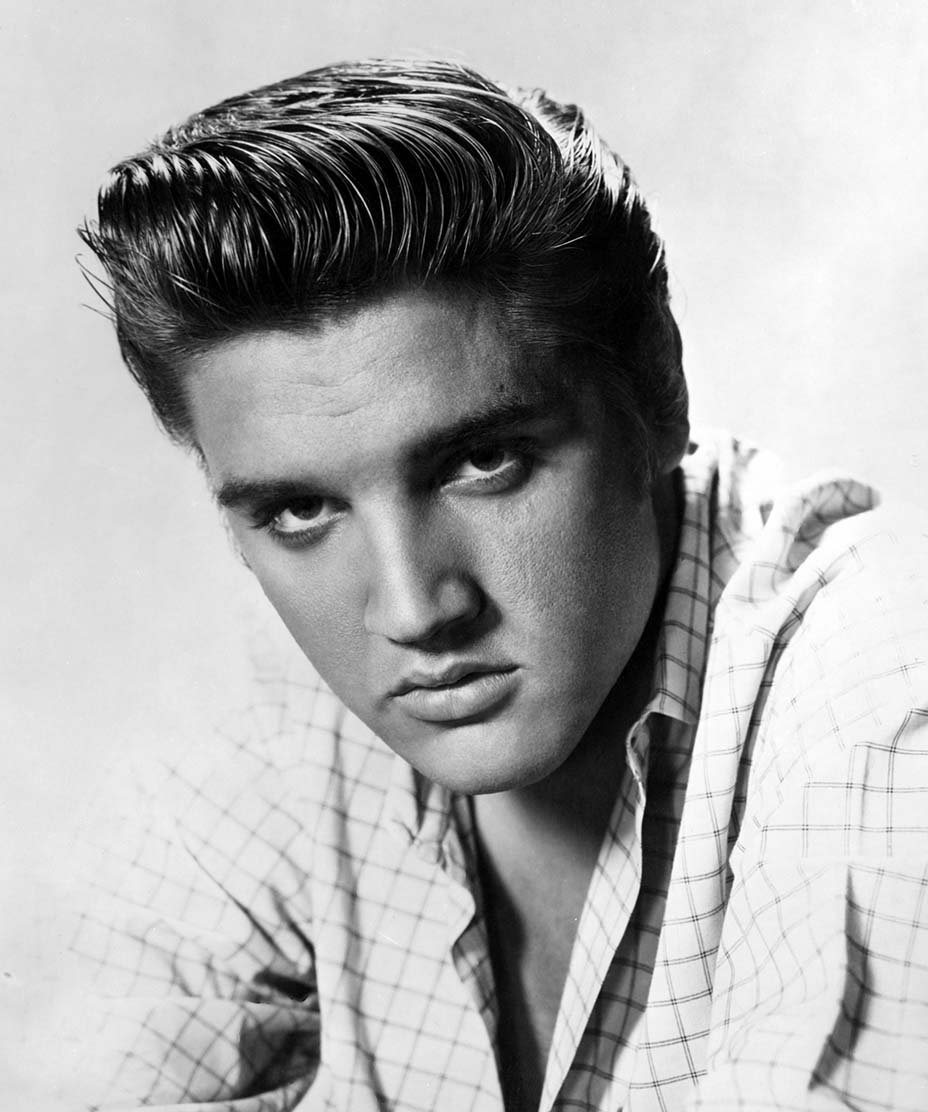 Although readers of the old Weekly World News would dispute that the 42-year-old king of rock ‘n’ roll actually died of a heart attack at Graceland, in Memphis, on August 16th, 1977, paranormal believers beg to differ.

The ghost of Elvis Presley is particularly well-traveled. Not only does ex-wife Priscilla Presley claim to speak with him on a regular basis, he has been sighted all over Graceland, peering out the window, hanging out in the kitchen and exciting actress Paz de la Huerta in the basement recording studio. “I felt his spirit go though me,” she recalled, “and give me pleasure.”

Like both Monroe and Valentino, Presley has also been felt in Room 1016 in the Knickerbocker Hotel, at a Wayne Newton Concert at the Las Vegas Hilton (perhaps wishful thinking by Newton, who claims to have seen the spirit). He has been spotted at the old RCA Recording Studios in Memphis, and cruising the Vegas Strip in a phantom convertible, no doubt listening to “Heartbreak Hotel.”