When a group of costume designers gathers for an evening discussion, you’d better bet it’s going to be one well-dressed crowd. Indeed, that was the case Wednesday night when seven Emmy-nominated costume designers gathered on the top floor of the Beverly Center (an area that will become a Michael Mina food hall after upcoming renovations) to talk shop, visual references, and fashion vs. costume with The Hollywood Reporter‘s style and fashion news director Booth Moore.

Ane Crabtree, nominated for her work on Hulu’s Handmaid’s Tale, arrived in a Handmaid’s red Prabal Gurung dress as an ode to the signature cloaks she’s created for the hit series. (The wardrobe has also become a popular choice at protests, too.) “I rented a dress,” she revealed. “I did a little FaceTime and asked “Which one?” and the assistant said ‘Wear red.'”

Transparent costume designer Marie Schley paid tribute to the Amazon series with her bubblegum pink suit from Bindle & Keep, the Brooklyn-based bespoke company that was the subject of HBO’s Suited documentary about making clothing for gender nonconforming people. “I wanted to play with gender-bending fashion,” she said, noting that her design work on the series’ third season, which sees Moira start her physical transition, has involved a deep look into “what it means to be feminine.” 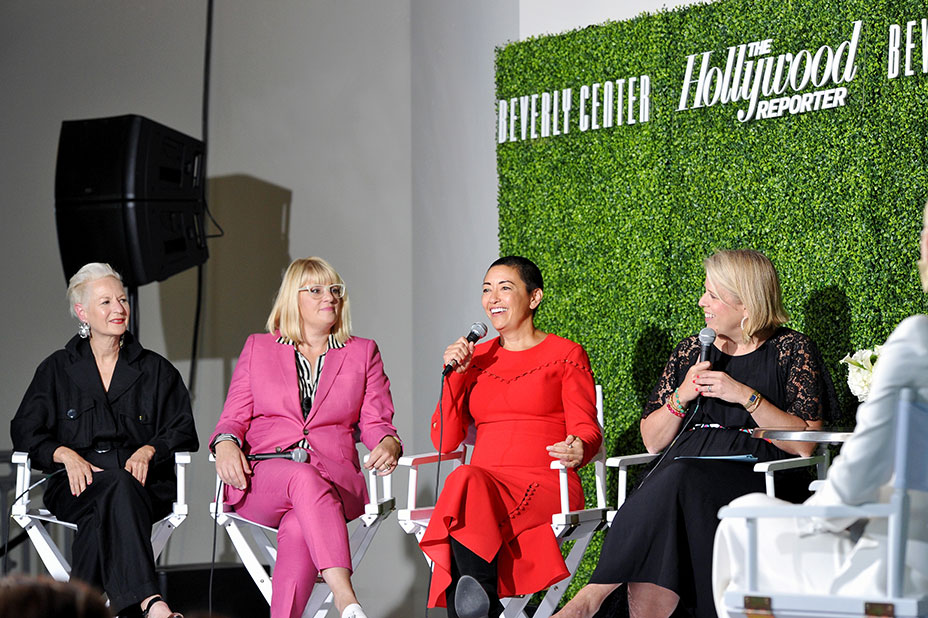 Despite each costume designer’s obvious love for fashion, not all of them have an interest in pursuing it in addition to costume design, which is less about adornment than it is about bringing characters to life. Summerville had positive experiences with her Girl With The Dragon Tattoo-inspired H&M collab and The Hunger Games: Catching Fire-influenced Net-a-Porter collection. But when Moore asked if there was anyone who wouldn’t do fashion design, Eyrich quickly raised her hand.

“I just don’t have the desire. That just breaks me break out a sweat,” said Eyrich, dressed in a killer Yves Saint Laurent jumpsuit and Rodarte earrings herself, to a laughing crowd. “I already work 16 hours a day, I can’t. I love fashion, but I don’t crave to design for anybody anywhere.” Fair enough, considering Eyrich said earlier in the panel that Susan Sarandon and Jessica Lange had to go through 62 outfit changes each for their roles as Bette Davis and Joan Crawford in the first two weeks of shooting Feud.

During the discussion, the designers recalled where they looked for visual references for their respective shows. Summerville, nominated for the pilot episode of Westworld, and wearing a tough-chic white Alexander McQueen pantsuit, did some, um, deep dissection in her research. When showing HBO what she was visualizing for the pilot of the sci-fi drama, she remembered, “I had this one section covered with paper and one of the guys said ‘Oh, is this what you’re trying to sneak past us?’ And I said, ‘No, I’m just trying to be respectful. You can take the paper down if you’d like’ because it was all autopsies and butcher scenes. And then it became this thing where they never questioned me again.” 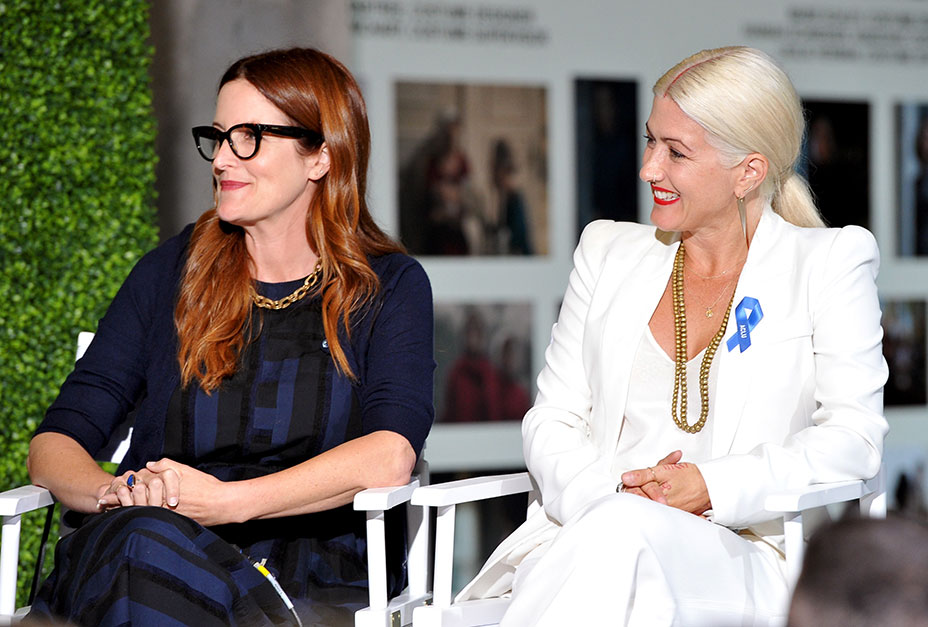 Friedberg said she based her work on the music that Big Little Lies director Jean-Marc Vallee curated for each character. “He made a playlist for every woman in the show, so I would listen to these playlists and get a sense of who they are or what they’re feeling, where they’re going and that was a beautiful place to start visually,” shared Friedberg, who dressed leading ladies Nicole Kidman, Reese Witherspoon, Shailene Woodley, Zoe Kravitz and Laura Dern, noting that their social status in the show is indicated by how close they live to the ocean.

Meek, who is nominated for designing Lady Gaga’s outfit during her guest appearance on RuPaul’s Drag Race, (and fun fact, is a former Australian figure skating champion who started out making his own outfits) recalled making three options for the pop star in two days.

“Having worked with her for the past six-and-a-half years, you never do one option with her,” said the designer, who has his own line, Aussie Gear. And he was right, because Gaga ended up choosing what was his third choice. “It’s always a time constraint, but the inspiration was the show. … I told her, we can’t go out there looking like you went shopping at HSN.”

Goco, on the other hand, has had it a bit easier designing for RuPaul. “The inspiration on the show is always RuPaul,” said the designer, who is based in New York, even though the show shoots in L.A., and who has designed for pop stars like Michael Jackson, Madonna. “We never have fittings. We just ship and send. It’s like Christmas for Ru every time. We just send them these gigantic boxes and they open them the day of filming.” 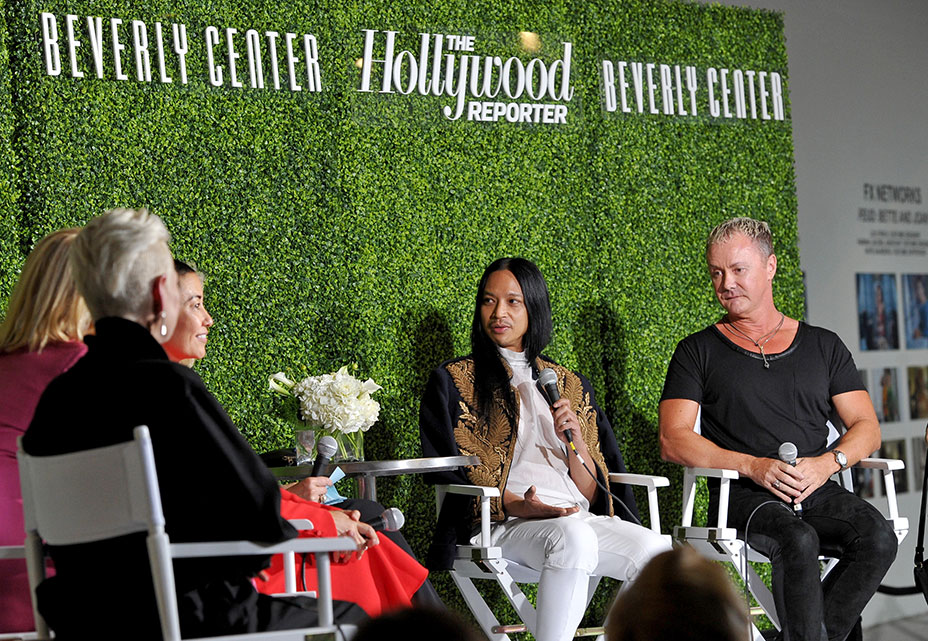 Experts in shopping as well as design, the stylish panelists also shared their go-to L.A. spots for finding the best resources for their projects.

Schley mentioned Golyester on La Brea Avenue as one of her favorite spots, while Meek noted he’s a fan of schlepping through downtown Los Angeles.

Meanwhile, Eyrich called out beloved L.A. boutique Traffic at the Beverly Center as her secret gem, for helping her to find inspiration. “I moved here in 1991 and I was an assistant to a stylist and I shopped for the very first time at Traffic,” she shared. “I will walk in there so tired and overwhelmed and they’ll give me a bottle of water and they will show me things that are hidden under a rack or some piece in the back, and then I get to go back and be a hero to an actor.”

After all, not all superheroes wear capes — some design them.

Emmys 2017: 'The Handmaid's Tale,' 'This Is Us' Nominated for Costume Design 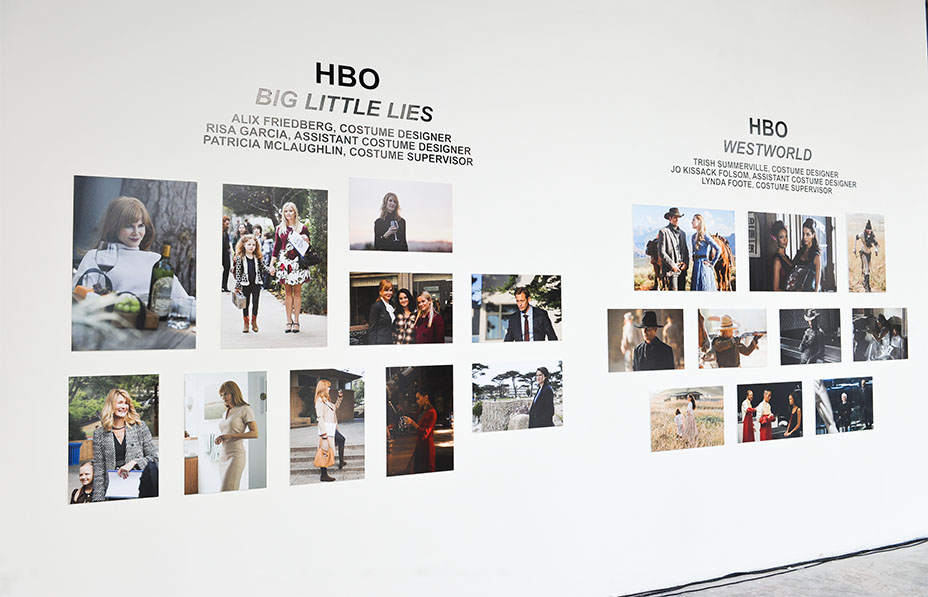