Part of the Hollywood brigade embracing a return to color on the red carpet, Rachel Brosnahan (who won the Emmy for outstanding lead actress in a comedy for her role on the Amazon series The Marvelous Mrs. Maisel) channeled a goddess in an ethereal red chiffon Oscar de la Renta dress at Monday night’s Emmys. 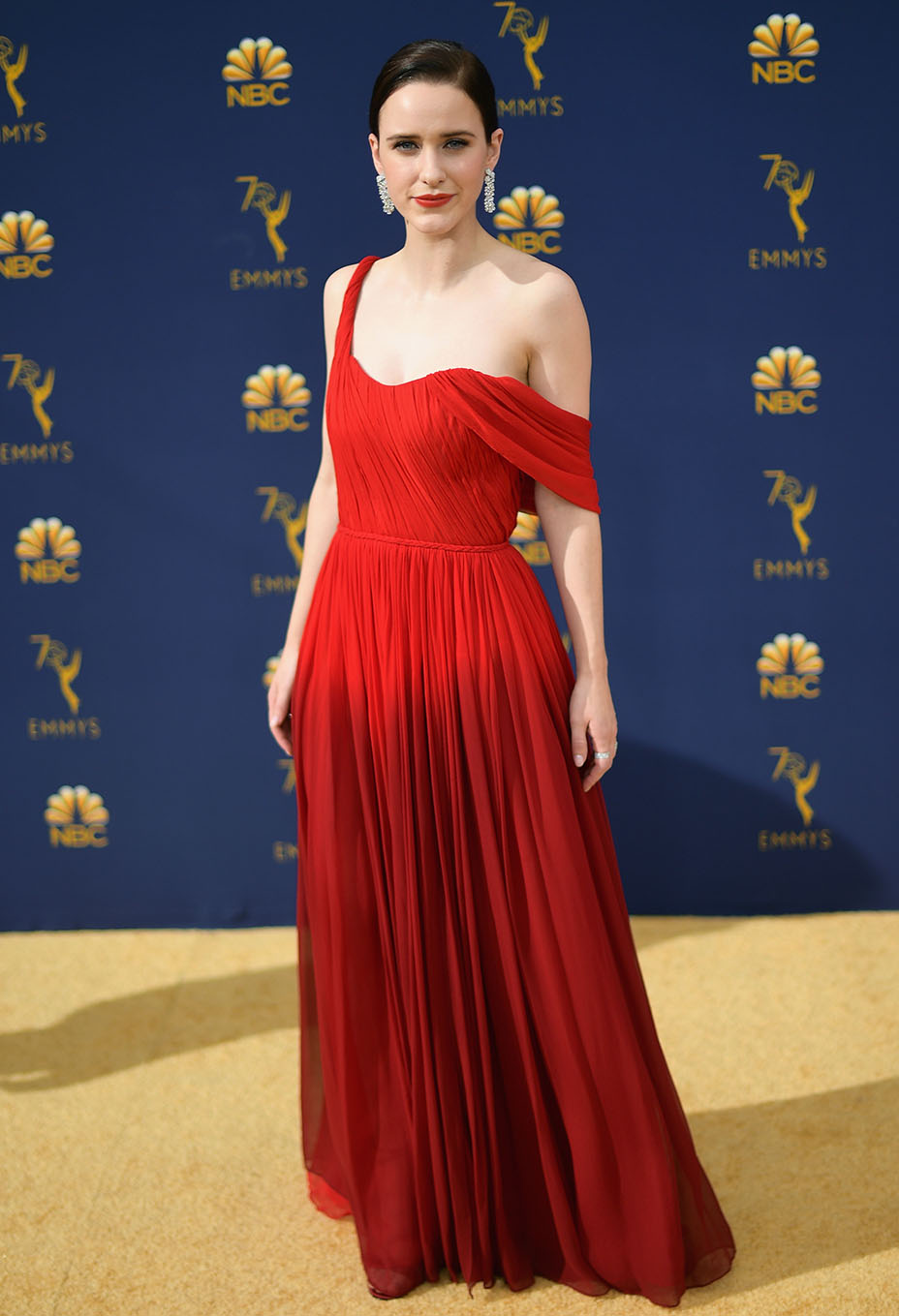 “Rachel was very particular; she wanted color, but she wanted to stay away from pastels,” says Jill Lincoln, who spoke to The Hollywood Reporter on behalf of styling team Jill and Jordan, who put together Brosnahan’s look. “Ultimately, we had a few fittings and we had some really amazing dresses on hold. But then I went to the Oscar de la Renta show last week and I saw that dress and literally took it from the runway. Nothing like last minute!”

Designed by Laura Kim and Fernando Garcia for Oscar de la Renta’s spring 2019 collection, shown at New York Fashion Week on Sept. 11, Brosnhan’s dip-dyed chiffon gown has a braided strap and off-the-shoulder sash, a corseted bodice and a braided rope belt. “When I sent Fernando the fitting pictures, he referenced John Singer Sargent’s ‘Madame X’ portrait, so hair and makeup took a cue from that as well,” says Lincoln, who chose Chloe Gosselin heels and jewelry from Tiffany & Co.’s new ‘Paper Flowers’ collection. “We wanted to go for a major, dramatic earring to pop against the softness of the dress; the earrings have a floral pave base and a waterfall of diamonds.”

Our #odlrspring2019 show was all about the woman who wanders in style. Head to our Instagram stories for a closer look at the collection. Photographed by @indiahartforddavis.

“Rachel’s partner [actor Jason Ralph] was DJing throughout the glam sesh and we had an Urth Caffe delivery,” says Lincoln. “It was a smooth-sailing kind of a day, which is a rarity in our field, up until the last few minutes when Rachel got an extra ring stuck on her pointer finger and her Judith Leiber clutch broke, it just exploded. We were scrambling, trying to ice her finger to get the ring off and wondering if we should try to cut it off. She was losing blood circulation in her hand, just as she was getting butterflies, so it was the perfect storm of ‘Why?!’ We didn’t ever get the ring off; it’s still on, as far as I know. I guess it was too easy of a day so, in the end, the fashion gods must have been having their last laugh! But everyone took it in stride.”