Sunday’s football game broadcast on Fox between the New York Giants and the Tampa Bay Buccaneers, which spilled well into the 7 p.m. hour on the East Coast, meant shortened red-carpet coverage prior to the Emmy Awards in many markets. For fashion fans who caught only a glimpse of all the cool jewels at the Emmys (also due to challenges such as flowing hair covering some truly spectacular earrings), here’s an up-close look at seven statement pieces that might have been missed during televised viewing.

Pink and red was the night’s hot color trend, seen in gowns that included the Badgley Mischka design worn by This Is Us’ Susan Kelechi Watson. The gown’s two-tone styling was a perfect match with the Supernova earrings by London-based jeweler Anabela Chan. Crafted of pearls, coral, diamonds and pink sapphires set in 18-karat rose gold, the chandelier earrings will be available in December. 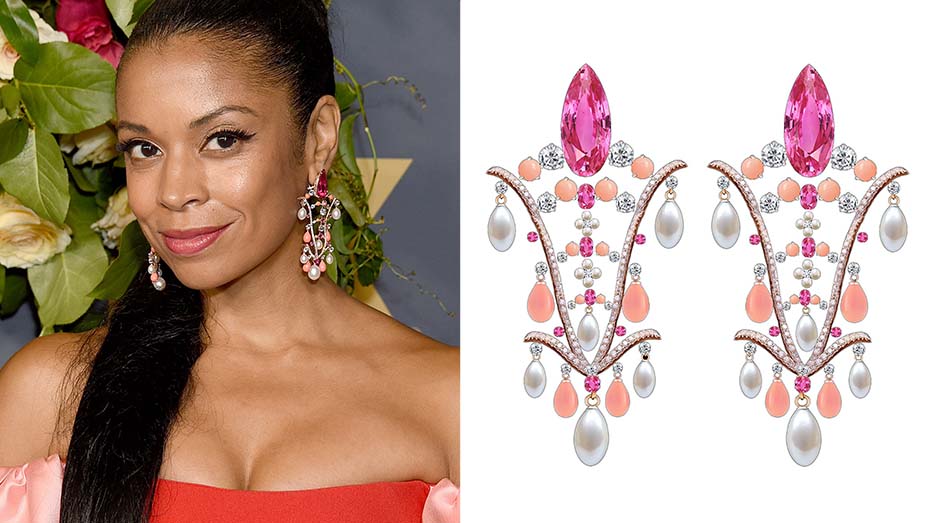 Russian Doll star Natasha Lyonne was noticed on Twitter for her unique clapping style, but perhaps she was trying to protect her fab David Webb rings? With her pleated gold Gucci gown, Lyonne wore a trio of rings by the New York-based jeweler, including the Link ring featuring a cabochon sapphire and baguette- and brilliant-diamonds set in 18-karat yellow gold and the Quatrefoil ring featuring a cushion-cut sapphire, brilliant-cut diamonds and black enamel set in 18-karat yellow gold and platinum. 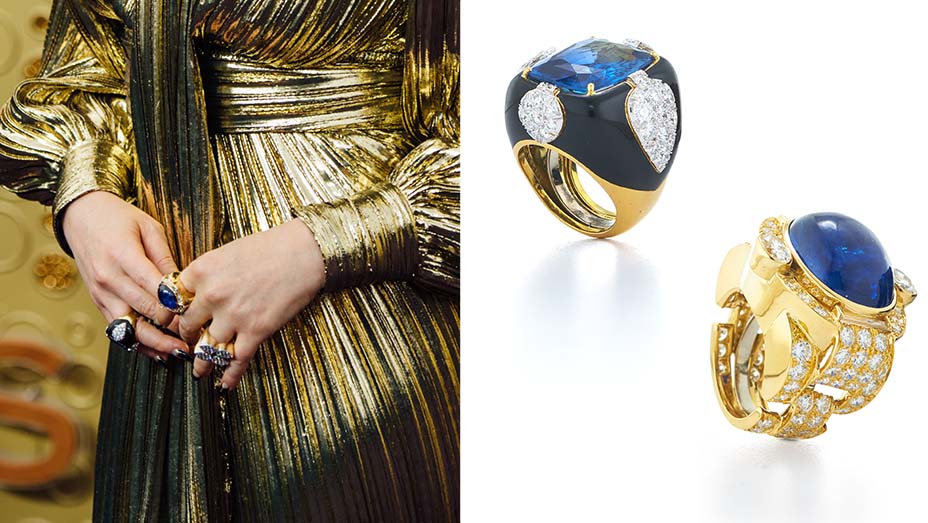 Hoops are a go-to fashion staple, but Amy Adams put that idea on steroids at Sunday night’s Emmy Awards. With her Fendi couture gown in black organza, the Sharp Objects nominee opted for hoop earrings by Los Angeles-based jeweler Norman Silverman, featuring 40 carats of diamonds set in 18-karat white gold and priced at $200,000. 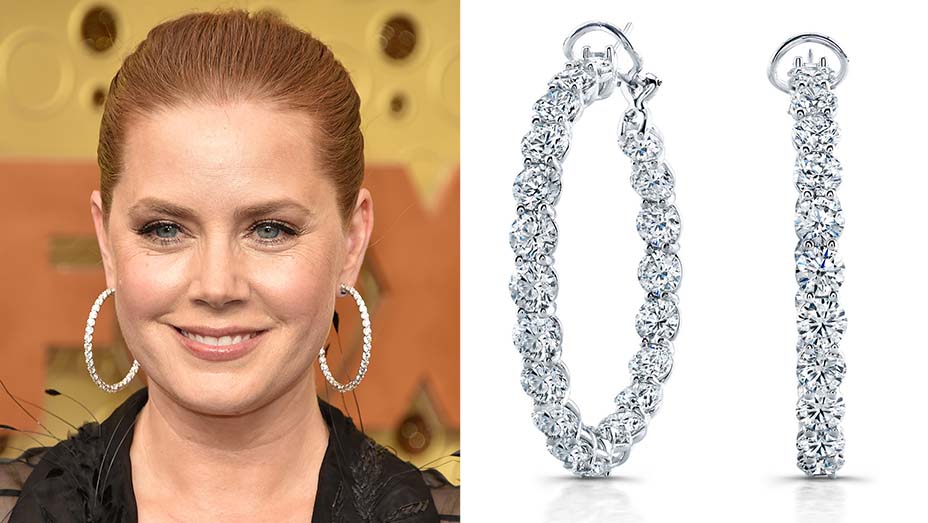 Gwyneth Paltrow, the star of Netflix’s upcoming The Politician, made only a brief appearance on the red carpet, but when she showed up onstage as a presenter, it was easy to catch the details of Paltrow’s look as she channeled the 1960s in more ways than one. With her vintage Valentino gown from 1963, the actress wore Harry Winston earrings also from that decade, a pair of 1968 hoops from the jewelry house’s archives, crafted of 30.68 carats of sapphires and diamonds and set in platinum. 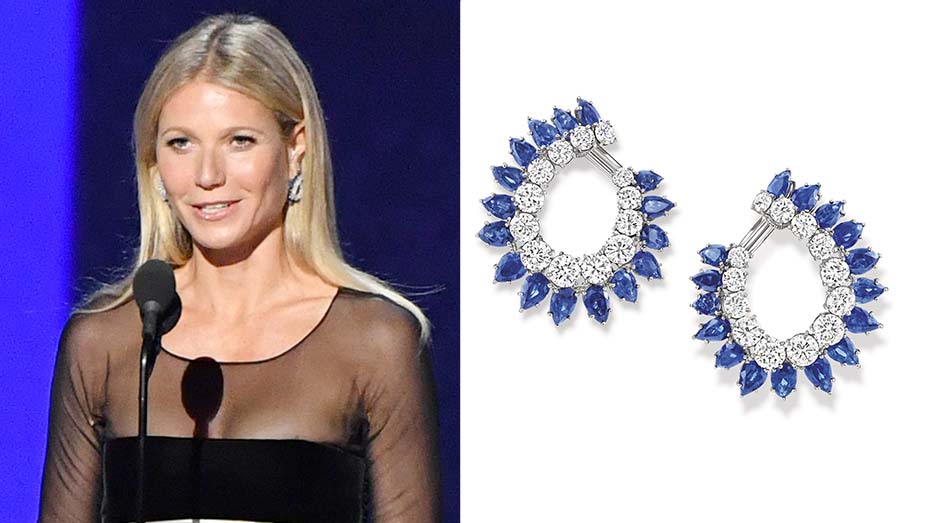 Among the night’s most-talked-about looks was Game of Thrones nominee Gwendoline Christie’s head-to-toe Gucci look from Alessandro Michele’s cruise 2020 collection, a Roman-inspired ivory gown and red cape that on Twitter drew comparisons to Jesus Christ and Pope Francis. Michele’s focus on historical dress for that collection extended to the jewelry, including these oversized statement earrings in metal with an aged-gold finish (they’ll arrive in stores with the Cruise collection in mid-November and are priced at $1,100). 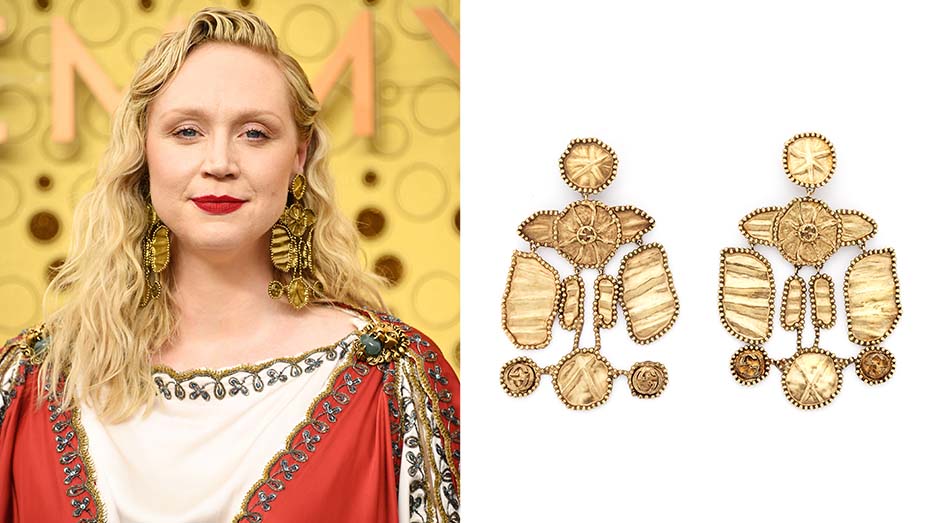 With her custom corset gown in emerald green silk charmeuse, Euphoria star Zendaya opted for white diamonds by Cartier, including this Agrafe cuff bracelet with its corset-inspired detailing. The cuff is crafted of 1,302 brilliant-cut diamonds totaling 29.81 carats, set in 18-karat white gold. 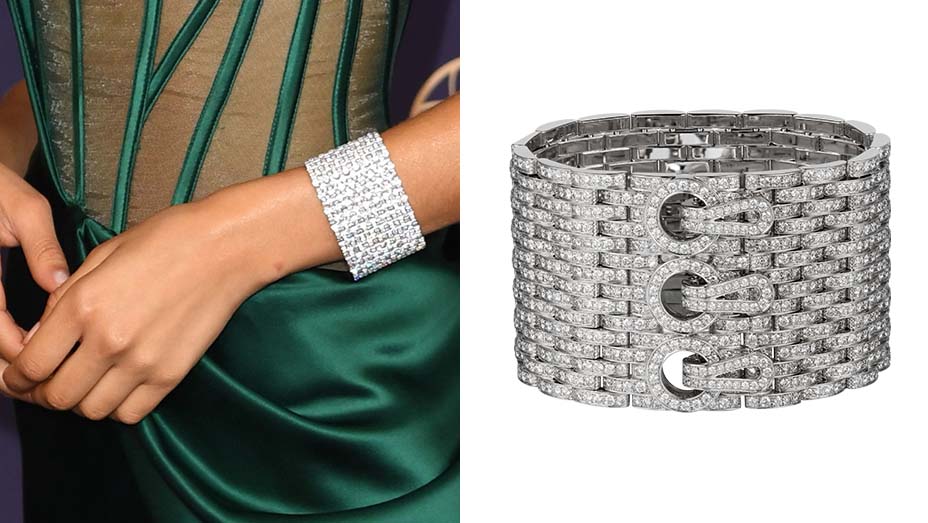 911 star Angela Bassett always makes thoughtful choices with her accessories, and Sunday night was no exception. With her asymmetrical gown by Rome-based designer Antonio Grimaldi, the actress mixed her jewelry, choosing earrings by Sutra, a cuff by David Webb and this pair of floral rings by Wendy Yue: a butterfly ring crafted of tsavorites, champagne diamonds, fancy diamonds, yellow diamonds and white diamonds set in 18-karat rose gold, priced at $17,750, and a floral ring featuring white and yellow sapphires, fancy diamonds and tsavorites, also set in 18-karat rose gold and priced at $6,500. 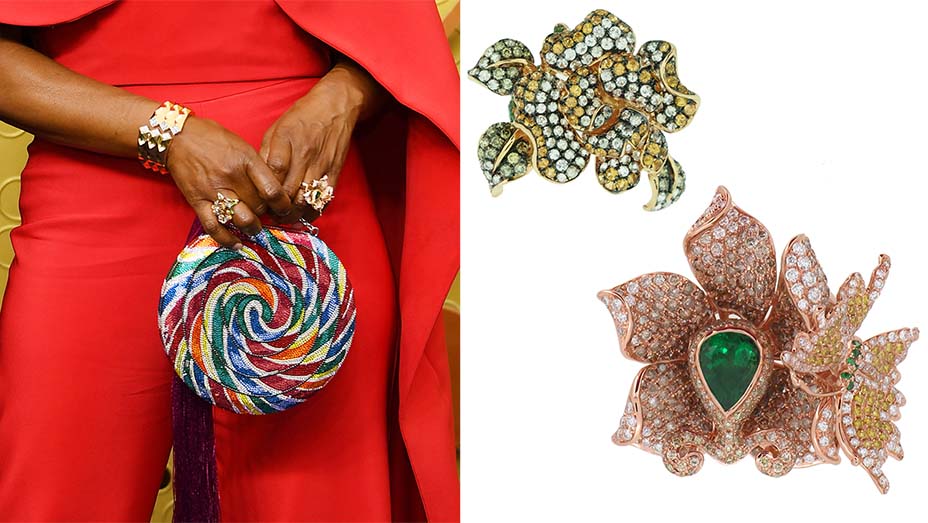