After a 2020 awards show where the nominees appeared virtually, the Emmy Awards are back and in person this year.

Read on to see the the best and the worst of the night — from the head-turners to the head-scratchers — of the Emmys red carpet. 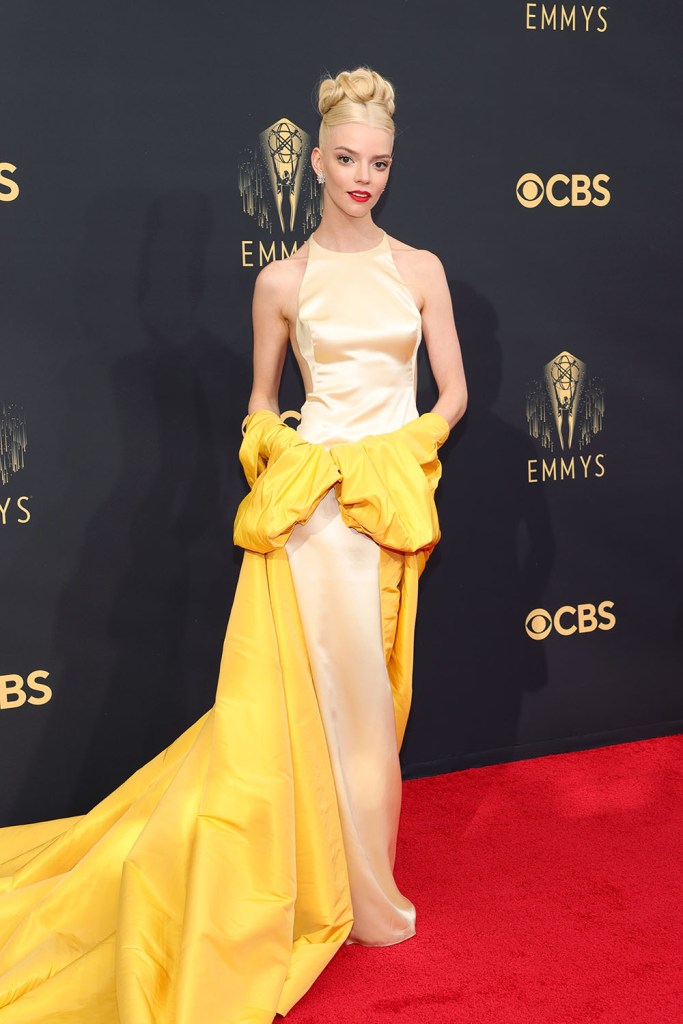 Quadruple nominee Michaela Coel, winner for outstanding writing for a limited or anthology series or movie for I May Destroy You, wore a bold neon two-piece gown by Christopher John Rogers.

Elizabeth Olsen in The Row

WandaVision nominee Elizabeth Olsen wore a caftan-like gown designed by her sisters, Mary-Kate and Ashley Olsen, for The Row, plus jewelry by Chopard and custom-dyed Chaka platforms by Stuart Weitzman.

Pose nominee Mj Rodriguez wore a custom teal gown by Atelier Versace with jewelry by Bulgari with diamonds totaling 71 carats. “I wanted to look like water coming out of the sea,” the actress said on the red carpet.

Never Have I Ever co-creator Mindy Kaling wore a black column gown with a custom bow by Carolina Herrera and shoes by Jimmy Choo, plus more than 50 carats of diamonds by De Beers Jewellers.

Pose star Billy Porter wore a winged custom look by Ashi with jewelry by Lorraine Schwartz and H. Crowne. “You know we got the wings. It was supposed to go all the way to the floor. That didn’t work out,” said the actor on the People/Entertainment Weekly red carpet preshow.

Kerry Washington wore a custom pale lilac bias-cut silk gown with corset detailing by Etro. Wrote the actress on her Instagram, “Thanks #Emmys for getting me out of the house..and into this AMAZING custom @etro gown, custom @stuartweitzman shoes and @debeersofficial bling.”

This Is Us‘ Mandy Moore wore a crimson gown by Carolina Herrera.

The Crown star Josh O’Connor, winner for best lead actor in a drama series, wore a custom suit by Loewe with a black-tie element in the shape of a flower. “I’m wearing head-to-toe Loewe and this is a flower. We’ve had some kind of issues with keeping it up but it’s holding, that’s the story,” he said on the People/EW preshow.

Lovecraft Country nominee Jurnee Smollett wore Dior Haute Couture paired with Bulgari jewelry (including a Divas’ Dream necklace in white gold and diamond) and Christian Louboutin shoes. “Thank you @dior and @mariagraziachiuri for making me feel like a princess in this dreamy dress,” wrote the actress on her Instagram.

Cedric the Entertainer in Richfresh

Dressed by stylist Jason Rembert, Emmy Awards telecast host Cedric the Entertainer wore a graphic blue suit by L.A.-based brand Richfresh. “I feel good. I feel swaggy. We gonna do a couple other looks tonight. We gonna go hard with it,” the comedian said on the EW/People preshow.

In London, The Crown nominee Emma Corrin wore a custom gown with matching gloves and cap by Miu Miu. The star called the look “crucible realness for EMMYS 2021″ on Instagram.

Nominee Kathryn Hahn wore a strapless jumpsuit with belt by Lanvin, and an emerald and diamond necklace, with diamond and emerald rings, all from New York-based estate jewelry Briony Raymond. “I love wearing a jumpsuit. It feels like me,” said the WandaVision star on the EW/People preshow.

Mom nominee Allison Janney wore an ivory look by Azzi & Osta, comprised of a structured crepe belted jacket with a peplum and draped neckline that transforms into a shawl with a custom full-length fitted skirt with slit, along with Tyler Ellis’ Aimee clutch.

Keri Russell, on the red carpet with partner Matthew Rhys, wore a rose-hued beaded gown with a front slit and caped train by Zuhair Murad.

Michael Douglas in Canali and Catherine Zeta-Jones in Christina Ottaviano

A Black Lady Sketch Show double nominee Robin Thede wore a custom gown by Jason Wu Atelier with vintage jewels from Fred Leighton and shoes by Stuart Weitzman. Wrote Thede on her Instagram, “This gown was lovingly and painstakingly made by @jasonwu and I’m gagging! It’s a Custom Pale Sage Embroidered Strapless Tulle Gown. Over 1000 hours of custom dyed fine bugle and caviar beads were used on this gown and over 50 hours in the making of the dress!!! And I’m wearing vintage diamonds all over from the @leightonjewels vault!!!! I am SO HONORED!”

Nailed It! host Nicole Byer, nominated for outstanding host for a reality or reality-competition program, wore a purple ball gown by Christian Siriano. Getting ready, she said on the People/EW preshow, “took like a full two hours.”

Rita Wilson, taking part in the opening of the awards show, wore a black silk tuxedo with sequined top by Tom Ford with jewelry by David Yurman.

Bo Burnham, winner for outstanding writing for a variety special for Bo Burnham: Inside, wore a blue velvet tuxedo by Etro and jewelry by David Yurman.

In London, The Crown winner Gillian Anderson wore a midriff-baring look by Chloe.

The Black-ish nominee wore a jacket with a bold floral pattern that was custom designed by his stylist Courtney Mays, plus a 39mm Omega Constellation watch, David Yurman bracelet and Magnanni shoes.

The This Is Us star wore Markarian’s pink sequin wrap dress, which features silk-bow shoulder details, from the Spring-Summer 2022 collection.

The Handmaid’s Tale nominee O-T Fagbenle wore what he described as a “modernized” version of a traditional Nigerian agdaba, paired with a 41mm Omega Constellation Gents timepiece in yellow gold.