“I wanted the outside to be like this disgusting yellow pawn shop, which I think is also an ode to Los Angeles and this whole concept of kids taking their mom’s Rolex to sell for heroin or something,” says Henry Levy, founder of the five-year-old DTLA-based luxury label Enfants Riches Deprimes (which translates to “Depressed Rich Kids”) of his new pop-up space in West Hollywood (open now through July 31). He cracks a half-smile behind his thick-framed yellow-tinted spectacles before returning to a pensive state. “The pawn shop is a very grimy, but very American,” he adds.

With its citron yellow exterior and obtuse block lettering reading “SILVER & GOLD PAWN” (the letters “E,” “R,” and “D” intentionally faded) the Enfants Riches Deprimes‘ pop-up shop at the Maxfield Gallery appears at once both wildly inappropriate and perfectly at home on Melrose Avenue, where it’s situated across the street from the posh eatery Gracias Madre. The facade is an homage to suburban monotony, excess and desperation, but it’s also just jarring enough that one thinks first that it must be an artistic statement — or an upscale art gallery of sorts — rather than an actually “grimy” institution. 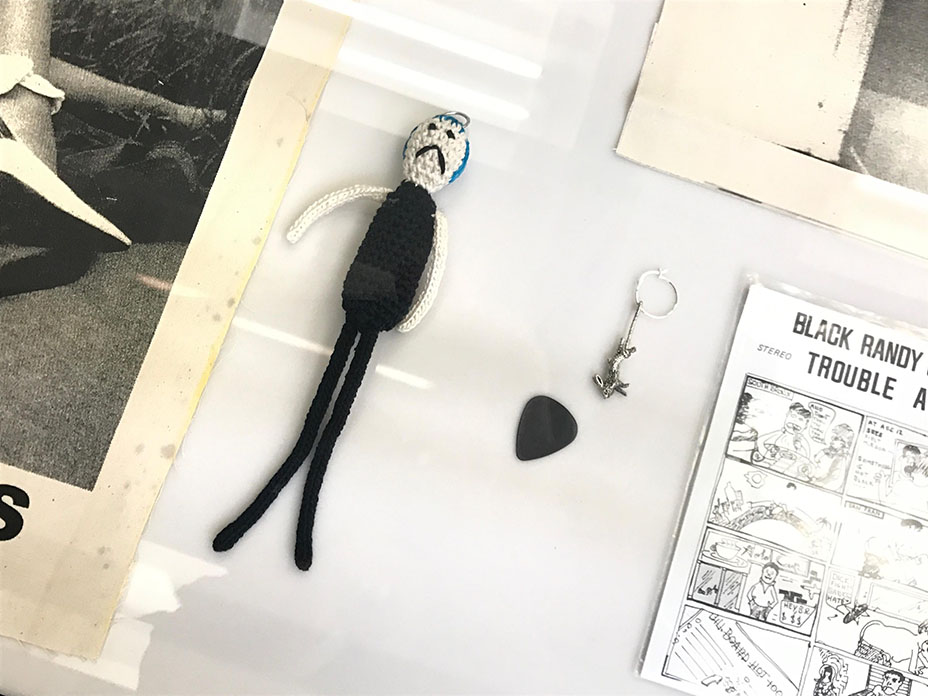 Once you pass through a mudroom haphazardly plastered with vintage magazine cutouts of busty women, bringing to mind the bedroom wall of a 13-year-old boy in the year 1983, the interior indeed feels more like an art gallery than a traditional retail experience. A single copy of each piece in the offering — which, for the first time since their initial launch, includes a few of the brand’s archival pieces, like the “Teen C—t” tee which had been worn by Rita Ora — hung on an industrial-looking pipe rack, or placed beneath Plexiglas. (“You put anything under Plexi and it’s effective…I wanted everything to be experienced that way,” says Levy).

“I really like to give each piece enough space,” he notes. “The store is a really good opportunity to really let whoever comes in experience the line the way I want it to be experienced.” With unfinished concrete floors, florescent light, sparse product placement and intentionally uninviting seating options (when asked if the rock-hard seats were an intentional effort to deter customers from getting comfortable, he laughs, “Kind of, yeah,” in a way that is not entirely joking), the Enfants Riches Deprimes experience certainly leaves an impression. 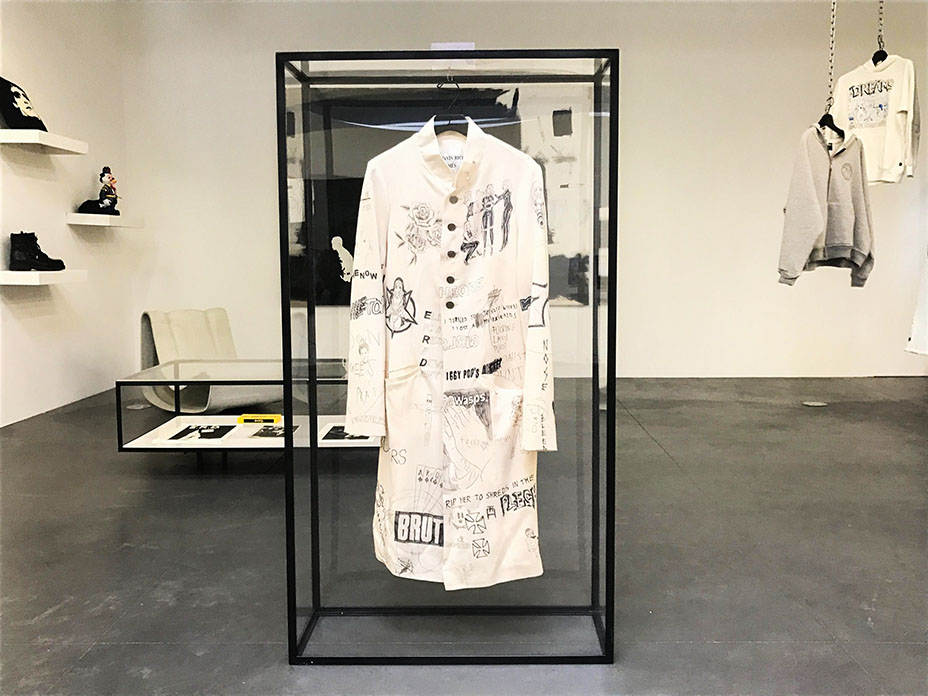 The ERD aesthetic, with its tattered, often one-of-a-kind leather jackets, androgynous slouchy tees with tongue-in-cheek sayings like “Ain’t no use in crying, baby,” and sad tchotchkes (think: knitted dead rabbits on a key chain), has garnered quite the following of occasionally depressed, always rich kids in Hollywood: Kanye West, Jared Leto, Sofia Richie, Justin Bieber and Travis Scott, to name a few.

By producing only a limited quantity of goods (sometimes as few as 15 tees per style) and keeping prices at the upper tier of the luxury sphere ($300 per tee shirt, $7,000 for a cashmere noose — more on that later), Levy has built a cult following of consumers who, he hopes, appreciate the pieces as art. “I won’t keep releasing a product just because it’s popular,” he says of his more coveted pieces, like the Enfants Riches Deprimes logo tee that has been worn by West and Beyonce. “They gain, like, a cult status, and I think that has a lot do with how rare they are.” 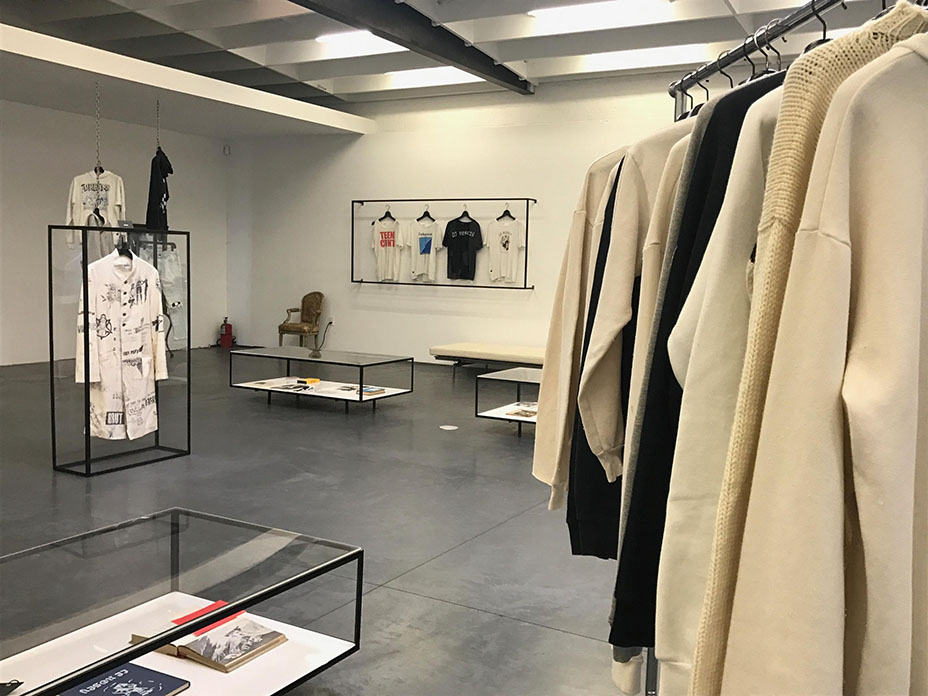 This mentality is inextricable from the DNA of the Enfants Riches Deprimes brand, which is why the designer’s upcoming collaboration with Vans — America’s favorite working-class sneaker brand — felt like a shock. But the collaboration has a definite ERD twist. “I’m not interested in reinventing the sneaker,” says Levy of why he chose to work with the classic Sk8-Hi top style, adding the phrase “Daydreams reminding me of how good it used to be.” The sneakers cost $595.

“There’s only 300 [pairs] — we had sold more, but I think we’re just not going to ship those out,” he says with a shrug of his shoulders. “I was thinking, ‘How many of these do we really need to make?’ Three hundred is a good amount. Everyone who wants to get one, or who needs to get one, will get one.”

The West Hollywood pop-up is the brand’s second pop-up to date, the first having been at Art Basel in Miami, though Levy has his eye on Paris or Tokyo for a follow-up. “I want to do a permanent store,” he says. “I like this idea of making your own world.”

Spending 20 minutes with the designer makes it clear that Levy doesn’t love clothes — he loves art. A purist might argue that the two pursuits are one in the same. Hell, Levy might even argue that they’re the same thing. But whereas many young artists aspire for their designs to go viral, sell out and incite a crazy riot a la Supreme any Supreme drop, Levy needs no such satisfaction or validation, perhaps a perk of his privileged upbringing in which everything he could ever desire is in reach. Nothing is unattainable, save for his own satisfaction with his work.

“I’ve always defined myself as a painter,” he says of creating all of the graphics for his pieces, using the leather jackets and tees as a canvas. “But I’m kind of, like, discovering every day what that territory is, because I don’t think I’d be satisfied just making paintings, either.” (His first painting exhibition was held earlier this year at Christie’s in Paris and included prints like “The Vicious Cycle of the ‘Non-Repsonsive‘ Infant,” reworked from a chart found in a ‘70s-era children’s psychiatry textbook.)

Like the $7,000 noose, a product that has actually sold on his website, everything he makes is “because I wanted to make it. None of this stuff really had a market before,” he says. With a chuckle, he continues, “I feel like I created a space for marketing depression.”