It was hard to stifle the immediate, unfiltered reaction to seeing the display at Gypsy Sport’s fall 2017 show, where tents were clustered in the middle of the runway like a pop-up village, and overturned buckets were played as drums while a soundtrack of rain, thunder and cars honking played overhead. Oh no, not another “homeless chic” show. 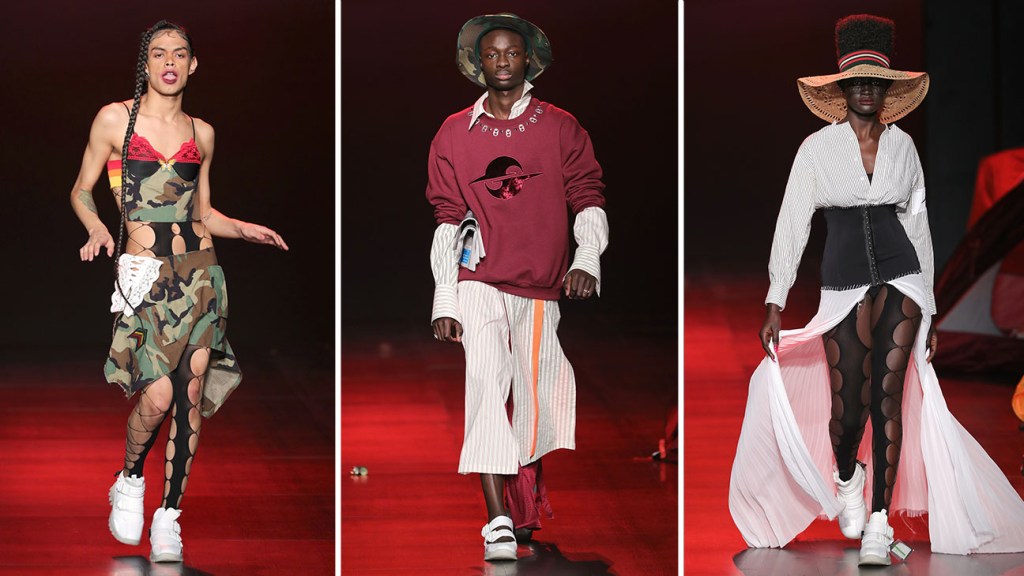 Just two weeks ago, N.Hoolywood designer Daisuke Obana was roasted on the internet for his collection inspired by homeless youth and their “creativity” (i.e., reusing the same plastic bags in which they carry their possessions as waterproof shoe covers when it rains). And the idea that another designer in New York would wade into the same, precarious territory came as a bit of a shock.

However, the crowd full of editors (Hamish Bowles of Vogue, Kirby Marzec of Teen Vogue) and fashion elite (Ken Downing of Neiman Marcus), didn’t cry foul. In fact the social media reaction to this collection, though small, was largely positive. “TY Gypsy Sport for using your collection to raise awareness about youth homelessness,” wrote Teen Vogue’s editor-in-chief Elaine Welteroth, “and for giving credit to the streets for its creativity.”

TY @GypsySport for using your collection to raise awareness about youth homelessness. & for giving credit to the streets for its creativity.

The immensely different reactions beg the question — is there a time and a place for the fashion industry to co-opt “homeless style”? Can it actually be done in tasteful, and more importantly, meaningful way?

Both Obana and Gypsy Sport designer Rio Uribe gave an explanation of their inspiration (Obana in his show notes and Uribe in a preshow monologue delivered over the loudspeaker), and both seemed to draw upon the same sources: For Obana, it was America’s homeless population; for Uribe, it was the overflow of homeless refugees in Paris in addition to the homeless on the streets of Los Angeles. 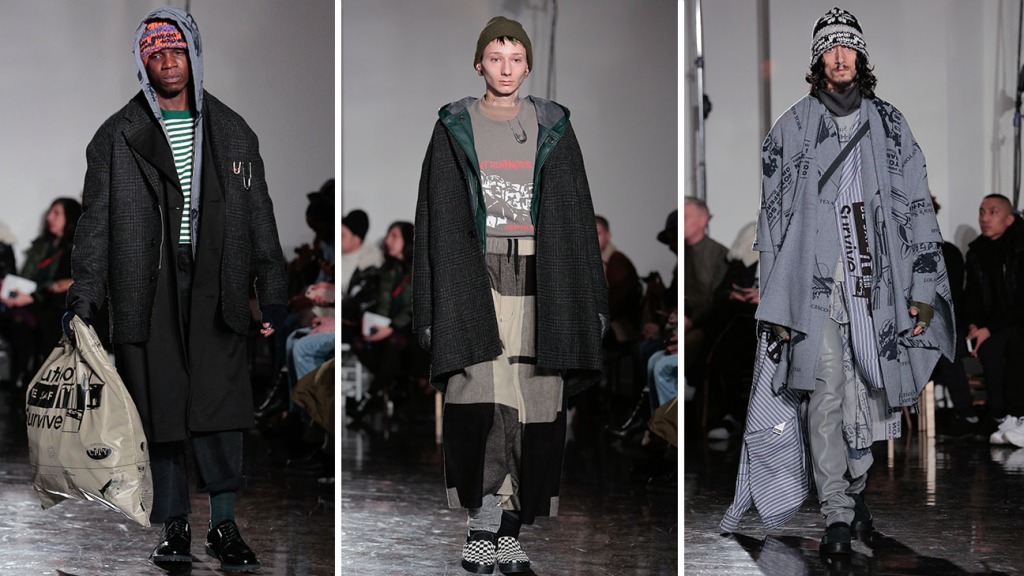 The execution, both in the clothes and the delivery, however, could not have been more different — a fact made clear almost immediately after models hit the runway at Gypsy Sport. Whereas N.Hoolywood’s male models walked with eyes cast down, wearing dejected expressions, at Gypsy Sport, models were buoyant, whipping their long braids left and right, skipping to the beat of the bucket drums which were played by famed street drummer Larry Wright and his sons. At one point, a model even snatched up an iPhone from a guest in the front row and proceeded to take selfies while she continued down the catwalk.

There was something more lighthearted, too, in the bright, tie-dye prints and playful accessories at Uribe’s show. A plastic two-gallon water jug was repurposed as a chic clutch and decorated with a crochet knit, while at N.Hoolywood, a stark, industrial size plastic shopping bag was a biting, confrontational reminder that many homeless carry all their worldly possessions in those very same tattered bags.

However, the argument could also be made that sometimes, a wake-up call is a necessary in re: the fundamental function of art. “The glass of fashion is mostly a reflective device,” wrote The New York Times‘ Guy Trebay of N.Hoolywood’s show. Perhaps those that called the Japanese designer’s collection “tone-deaf,” “tasteless,” and “insensitive” would consider the clothes less offensive if they weren’t also being sold at a luxury price point. (Gypsy Sport wares retail slightly cheaper, in the $300 range.)

“I don’t want today’s show to be like a downer, or anything,” said Uribe to the crowd before his show began, almost as if anticipating the skepticism of a collection he claimed was “inspired by people who live on the street.” He added, “it’s actually a celebration of life and a celebration of all the different types of people that are here.”