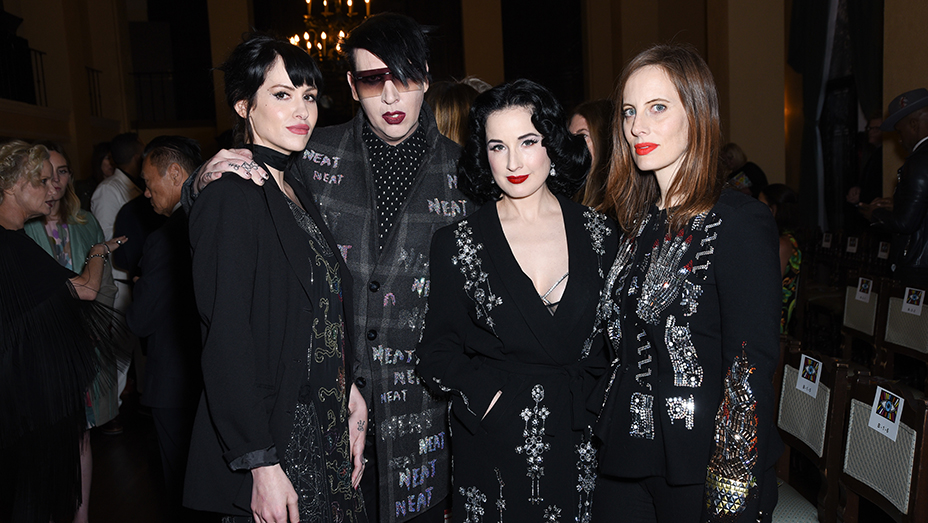 “We are embellishment and pattern people,” Hartig told The Hollywood Reporter. “Inspiration is all over the map — everything from 17th-century Flemish memento mori paintings and Ottoman carpeting to 18th century children’s hats and 19th century botanicals.“

The melting pot pattern mix included red-and-black cheetah brocade, green malachite, lemon tree branches, and a pattern with images of loafers, rotary phones and Jean Paul Sartre’s book Being and Nothingness. There was also iridescent blue and red lamé suiting for men and women printed with hand-written lyrics by Jimi Hendrix, part of an ongoing collaboration between Libertine and the Jimi Hendrix Estate.

Johnson called out oversize wool jackets decorated with a fringed collage of ribbons, bottle caps and chain paillettes as among his favorite pieces, comparing the look to a “modern-day shaman.” 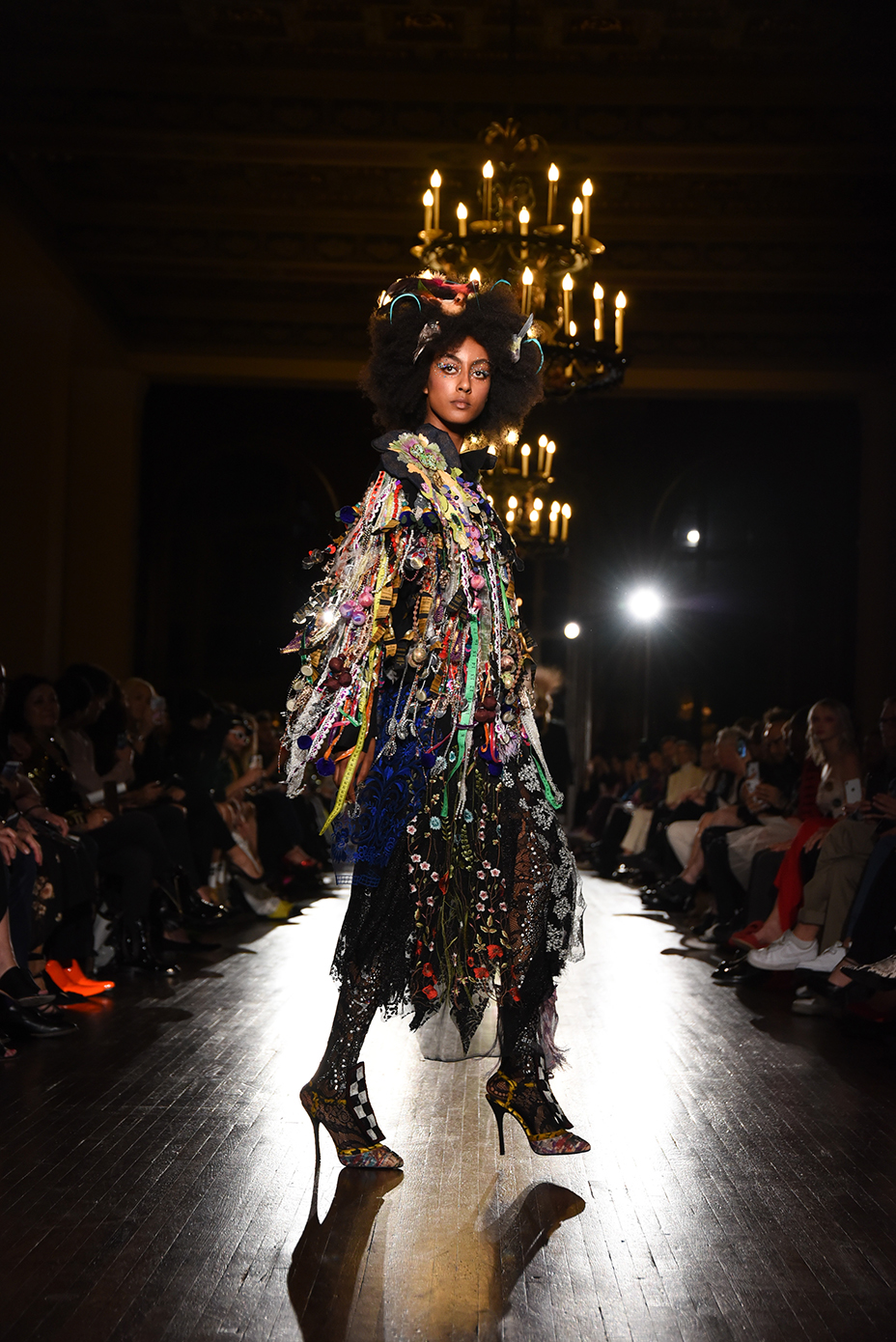 “You know I love sparkly things, so Libertine is like a fashion wet dream for me,” Lambert said.

Also on parade were colorful faux-fur jackets and red carpet-worthy spangled pants and gowns. Von Teese had her eye on a long sheer sequined dress shown on a model whose hair burst into pink plumage. “It was so beautiful! Johnson has left a lot of glamour in L.A.,” she told THR. 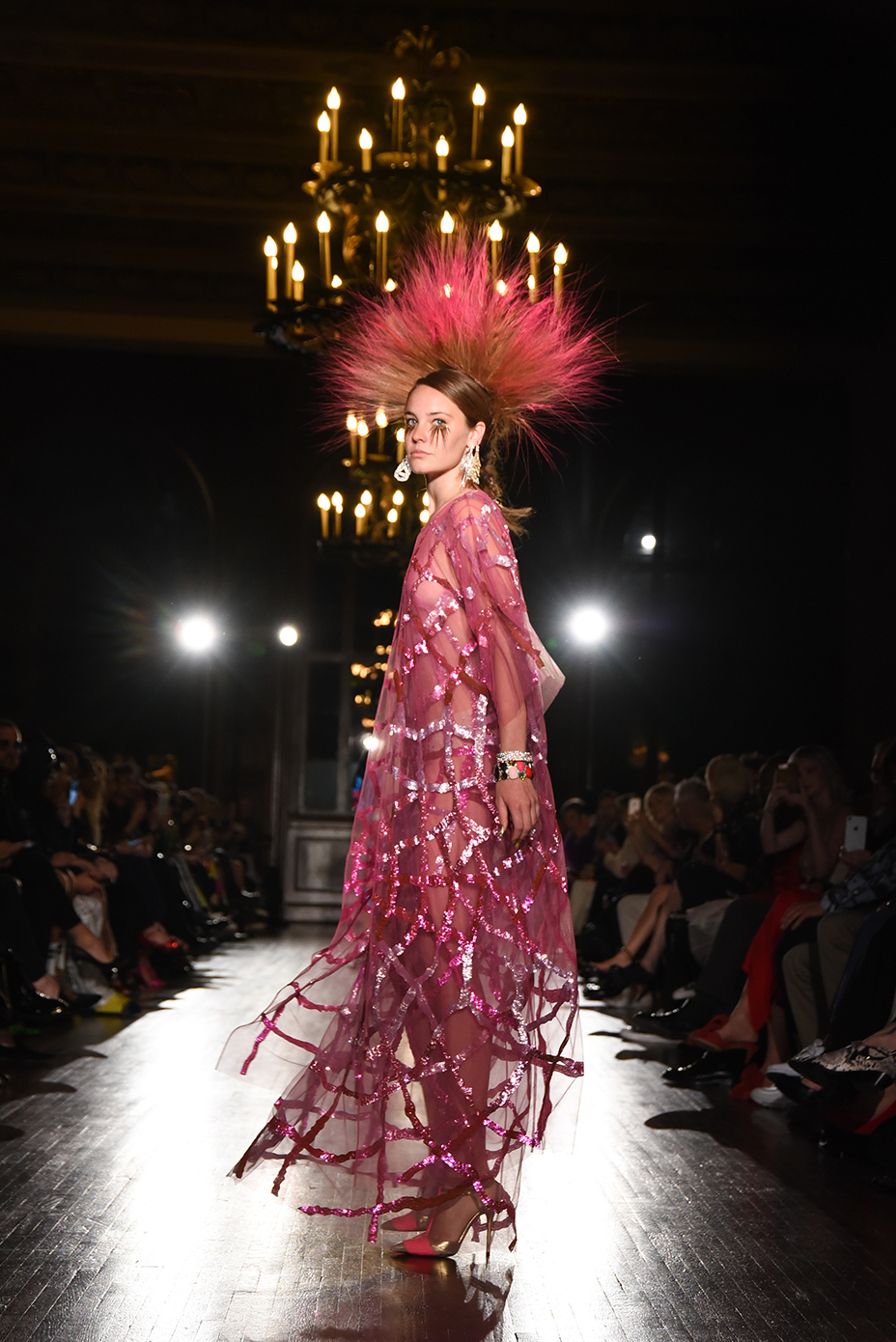 And then there were the piled-on accessories including covetable crystal-embellished lace hosiery, fanciful pipe-cleaner crowns, strappy heels (some trimmed with pompoms), sparkly chandelier earrings worn on each ear in multiple, and armfuls of colorful stacked bangles fashioned out of packing tape.

The arty exuberance carried through to hair, makeup and nails. Models had multi-colored crystals applied to their foreheads, bold fuchsia eyeshadow, stripes of colored liner swiped vertically above and below the eyes like lashes, ultra-long lower lash extensions, braided hair decorated with vibrant mohawk-like plumes, and fringed nail extensions.

“To me, makeup and hair is always key to anything you do and it tells the story,” Akerlund told THR. “The makeup is an extension of the designs. We were trying to choose one makeup look but then I liked so many that we just did four because more is more!”

#Repost @voguerunway ??? Despite already having her hands full with a roster of clients (including Madonna), @bcompleted is open to new adventures. Tap the link in our bio to see her photos from her first full-on @officiallibertine experience. Thank you @voguemagazine for trusting me with this & @officiallibertine & my @theresidencyexperience crew for the opportunity by moi

Donning a custom gray windowpane-check Libertine coat decorated all over with the word “Neat,” Marilyn Manson gave his post-show review to THR. “I thought the show was amazing. I have to say that, strangely, I liked the women’s pieces more than the men’s but, you know me, I’m wearing lipstick so… My favorite were the sequined silver stockings. And I thought that the eyeliners and eyelashes were really epic.”

“It was amazing,” Fergie said. “Standing ovation! It was kind of like a rebirth. It was in bloom, it was colorful, rock ‘n’ roll, palm trees, nature on the nails. What’s not to love? My friend B. Akerlund styled it. I’m so proud.”

Akerlund weighed in on her behind-the-scenes styling experience, telling THR: “We are two crazy people working together. I’m an over-accessorizer and so is Johnson and this is what you get! I’ve never met anyone who told me, ‘No, more!’ People usually tell me, ‘Can you tone it down?’ What I really like about Libertine is that things get recycled and restyled and reused. I’m really into sustainability and doing my part to save the planet…I love the whole working process in the Libertine studio. It’s about ‘Oh we need this!’ And we will just go into this bin and add things and do things very spontaneously and last moment, and that’s my type of jam. It’s all reworked in some way.”

Hartig and the Libertine crew all wore white lab jackets with “Libertine Superlab” printed on the back along with an atomic symbol and the words “Caution, Warning, Danger” that will also be sold as part of the collection.

Hartig emphasizes that putting the show together on the West Coast was far from simple: “I’m good but I’m glad it’s over with, as it was so much more difficult showing here than it is in New York,” says Hartig. “We have an infrastructure in New York and we have nothing here, so we had to cobble it together, which was extremely frustrating, but it came out well.”

After the fashion show, guests moved into the outdoor courtyard for cocktails, passed hors d’oeuvres and a performance by model-musician Ariel Beesley, a San Fernando Valley native.

During the after-party, Buterbaugh shared his surprising connection with Hartig: “I’m so proud of Johnson. I think [the show] is next-level for him. The styling, the makeup, every detail was just beyond description. I have a soft spot for him because Johnson used to deliver flowers for my flower shop before he started the brand, so I’ve known him that long. It makes my heart beam with joy to see him succeed like this.” He added, “The show was so glamorous. I thought the red and black cheetah prints were so beautiful and also that dress with the gold chains hanging off it. To be honest, it was piece after piece. I had to photograph the finale so I can go through it later!”