The first-ever mobile comedy club is rolling into Los Angeles this weekend, kicking off a 17-city tour for good.

The No Fuss Comedy Bus, a refurbished school bus with room for four to six comedians to sleep and eat, will kick off a national tour Saturday with two performances in downtown L.A. Heather Pasternak, Michael Lenoci and Marlena Rodriguez are among the headliners, with special appearances by surprise guests. The pop-up is more than the typical comedy show, though, as proceeds go to Comic Relief, a charity that uses the power of entertainment to help end homelessness.

Taylor “Bugs” Streitz, a stand-up and writer on new DC series Stargirl, is the brains behind the operation, and was inspired to start NFCB after staying in a retrofitted bus with friends and deciding to combine her passions for comedy and camping. “I wanted to create something for comics to take on the road for people that don’t have comics in all areas,” she says.

The comedy bus was designed to include a green room, as well as kitchen and sleeping quarters, and the show stage and lighting is stored underneath.

“Basically we will go into towns and cities and we’ll pop up much like a food truck does, but our stage will be on the outside of the bus,” Streitz says. “The side of the bus will serve as the backdrop, and we set up the stage outside and we have canopies and chairs. We’ll have our comics who have been traveling with the bus but we’ll also book local comedians in the cities and towns we roll into.”

Streitz recruited her friends and fellow comedians to come join her on the tour, pitching people on Instagram and backstage at the Comedy Store. As the idea came together, so did the charitable aspect because the performance is on wheels.

“Because it’s a mobile comedy club, not only can it go anywhere, but it can be versatile and go to a homeless shelter and pop up and do comedy there — not just to raise money for these people but also to give these people a sense of relief,” she says. “Then I thought all kinds of charities, depending on if someone’s cousin is fighting breast cancer and we need to go and raise money for her surgery, then that’s exactly what the bus should do.” 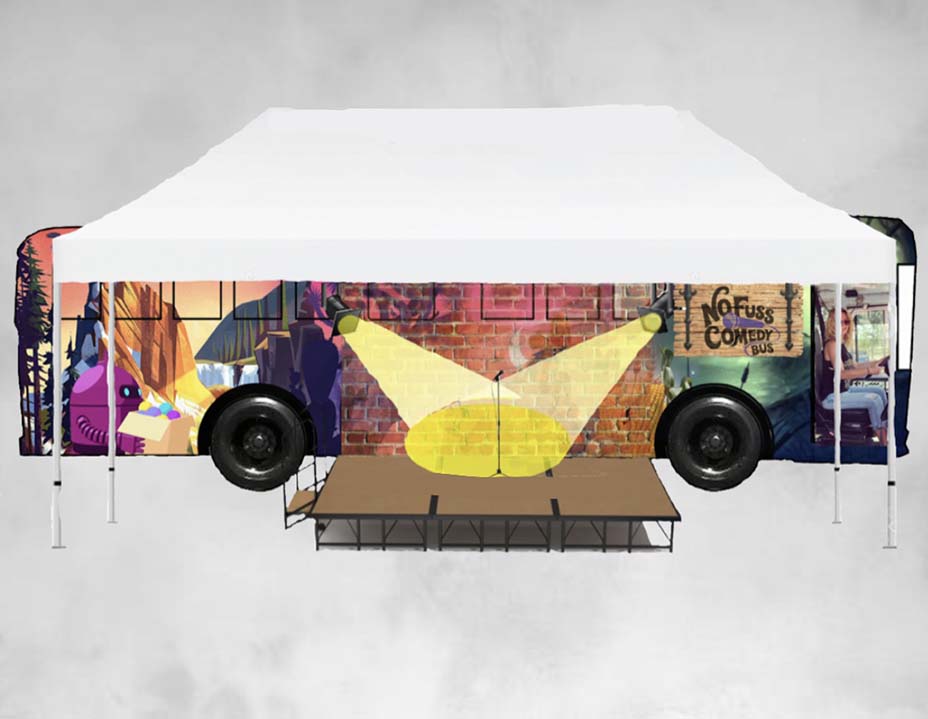 Following its opening night in L.A., the bus will keep rolling across the country, hitting cities across the West Coast and Midwest. After the 17 dates, Streitz hopes to turn the idea into a reality show that’s “like Road Rules with comics.”

“I had seen the documentary by Jerry Seinfeld called Comedian, he talks about workshopping jokes and you see him traveling to these different cities, you see him at dinner with these different comics and you see them on stage bombing and being successful. So it would be that idea, but you’re with these comics and they’re living on a bus together as they’re trying to raise money for charity and behind the scenes,” Streitz added of her end goal.

Lenoci, who opens for Chris D’Elia, said he was inspired to join the tour because of the opportunity to reach audiences in a different way.

“When I heard that they were turning a school bus into a traveling comedy club, I was all about it,” he said in a statement. “The coolest thing about NFCB is that it comes to you. You could be hanging out in the backwoods of Oregon and you just might see the bus pop up down your backyard.”

Pasternak, who has appeared on The Late Show With Stephen Colbert, added that “With something like NFCB, you’re not only bringing joy to the people right in front you but you know it’s got a ripple effect benefiting Comic Relief and other charities. Comedy isn’t just something you can find at traditional comedy clubs anymore. You can find it at underground bar shows, in the back of coffee shops and apparently now, on traveling school buses, it’s an exciting time to be in the business of laughter.”

The Los Angeles shows, held at 1001 N. Broadway, will include live music, beer pong tournaments, food trucks, an open bar and a silent auction. Tickets can be purchased online.