Continue to The Hollywood Reporter SKIP AD
You will be redirected back to your article in seconds
Skip to main content
November 7, 2016 11:52am

While the official duties of a first spouse are primarily ceremonial, it is a position of maximum visibility that is vital to the president’s public image. Over the years, the role has been referred to as “hostess of the White House” and “presidentress,” but many speculate that Bill Clinton may adopt the new title of “first gentleman” or “first laddie.”

Mike Gregorie, first spouse of the former governor of Washington, referred to himself as “first Mike,” so “first Bill” wouldn’t be out of the question, either.

Many first ladies, from Frances Folsom Cleveland to Jacqueline Kennedy Onassis to Michelle Obama, have been fashion trend-setters. As first lady, Obama boosted young American designers such as Thakoon Panichgul and Jason Wu by wearing their clothing throughout her husband’s presidency, and mixing in more accessible pieces by American brands J. Crew and Talbots. She also appeared on the cover of numerous fashion magazines and hosted a fashion workshop for students and designers at the White House in 2014. 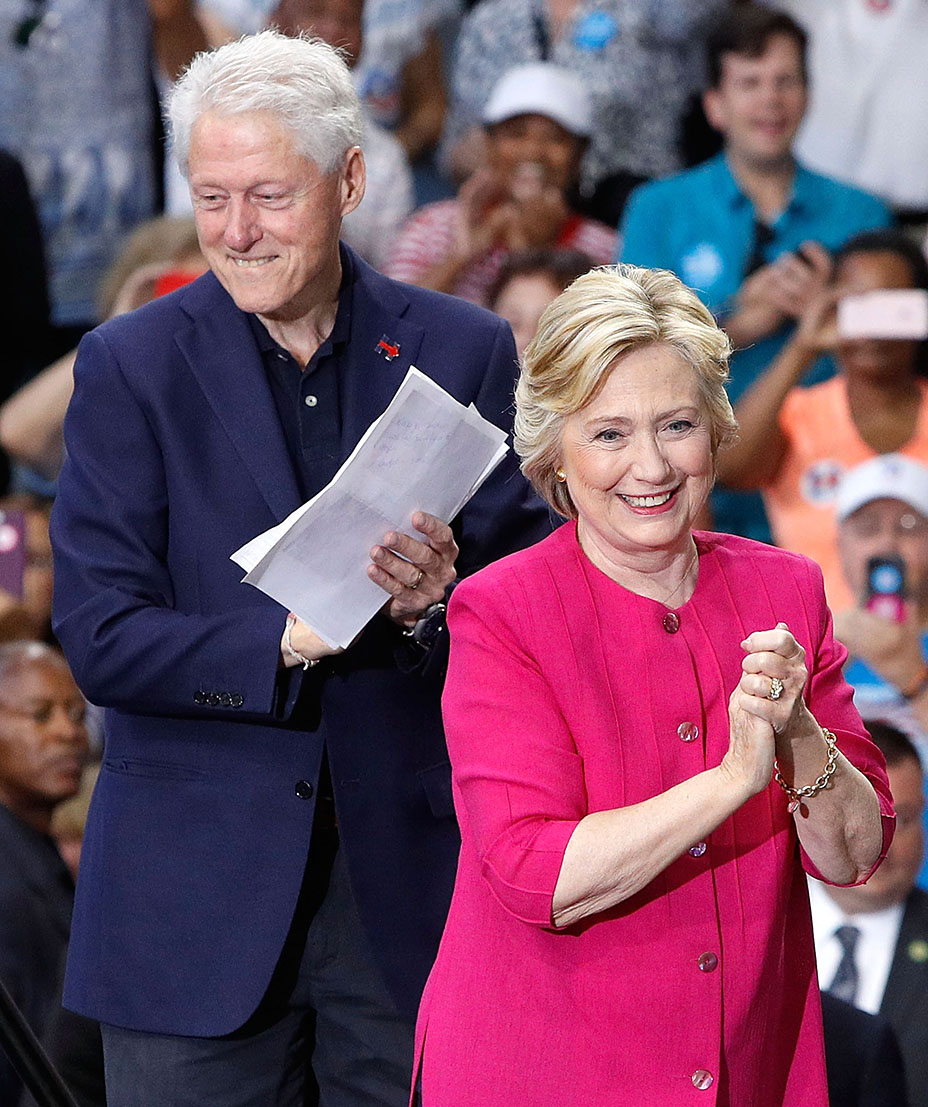 He has shown his support for American manufacturing by sporting a “Built in Detroit” Shinola watch and actually purchased 13 of them, mostly the Runwell style, after touring the Shinola factory in Detroit in 2014.

However, he isn’t known for starting fashion trends — at least not the way Michelle Obama popularized belted cardigans over full skirts, statement necklaces and incredibly toned bare arms, for example.

See The Celebrities Who Have Already Voted

But that doesn’t mean he shouldn’t be prepared to up his game, says celebrity stylist Jeanne Yang. “If anything, there will be more scrutiny of him, so he needs to step it up a notch and be more up-to-date,” she says. “No more slouchy shoulders and no more mom jeans.”

Yang suggests Bill Clinton make a visit to custom tailor Martin Greenfield, whose shop is not far from Hillary Clinton’s campaign headquarters in Brooklyn, in a factory that’s been making suits since the Civil War era.

“He’s going to have to make an effort to wear a slightly tighter suit,” the stylist says, “I’d love to see him in younger silhouettes and a cool, fun tuxedo. Get some chambray in there, maybe some knit ties, maybe throw in a bit of J. Crew like Michelle Obama, or a cool pocket square from TieBar.com. He’s slimmed down, he should take advantage of that. I’d volunteer to help him out.” 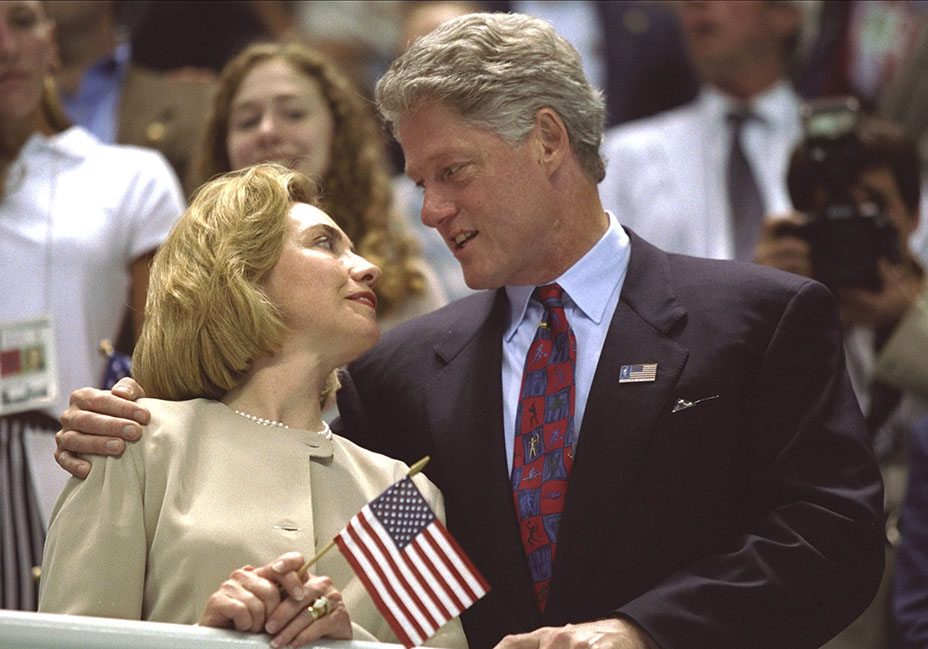 “I would hope he would dress conservative, subdued and not flashy, so the light can shine on her,” says Kathleen Felix Hager, costume designer for HBO’s Veep. “He could make a statement and talk about bringing the textile industry and manufacturing back to the U.S., which would have an effect on a lot of people.”

Although Yang deems the idea of Hillary and Bill Clinton trying to color coordinate as a couple “too prom,” Hager disagrees, sharing that she did just that for a certain power couple on the show Veep.

“On the season five finale, when Selina Meyers lost the presidential election, I dressed Laura Montez, the new president, in a bright yellow suit. Her husband was in a couple of scenes, and I deliberately put him in a yellow tie so he’d be a reflection of his wife,” Hager explains. “In a future episode, I did the same thing; she’s in a teal suit and he’s in a teal tie. He’s not in the political realm, he’s just a supportive spouse.”

On Election Night, maybe the two Clintons “could come out in coordinating victory colors,” Hager suggests. “After all, they are not only married but forever connected by their joint political drive and history.”

Even if they do plan matching outfits, the glare of the fashion spotlight will always be on Hillary more than Bill, says noted historian Catherine Allgor, who is director of education at the Huntington Library. “It’s still going to be about what a female leader looks like, and we’ll still be talking about her hair and pantsuits — because we may have a female president, but we still live in a patriarchy.” While Bill Clinton’s inaugural night tuxedo will no doubt land in the first ladies’ gallery at the National Museum of American History in Washington alongside gowns from the past 200 years, “it will be boring,” Allgor says. “Nobody will remember it.”

Apart from style, the role of first spouse comes with an expectation of substance, too. Past first ladies have promoted nonpartisan causes such as literacy, healthy lifestyles and conservation. And Bill Clinton certainly has a head start with his work at the Clinton Foundation and past hurricane relief efforts.

“First lady is a very powerful position, but because it’s always been a woman, it has had to be masked and hidden because we are very threatened by powerful women,” says Allgor, who wrote the 2007 book A Perfect Union: Dolley Madison and the Creation of the American Nation and likens Madison’s charisma in the first spouse role to Bill Clinton’s. “You have someone incredibly well-educated like Michelle Obama, and she wants to talk about race and class, but she talks about children, veterans and healthy eating because what she’s doing has to be hidden.”

Allgor continued, “When Bill Clinton tried to engage his wife in his healthcare initiative, everybody freaked out even though she was as qualified as any presidential appointee. It will be interesting to see what happens in the reverse. Here’s a man who is qualified — should we be using him in some way? The first gentleman is going to challenge our ideas of power.”

Traditionally, first ladies also have performed certain domestic duties, including helping to plan state dinners and decorate the White House for the holidays.

Although Hillary Clinton has already said that Bill will not pick the White House china, the act has historical significance. When Mary Todd Lincoln picked out the presidential china during her term as first lady, she began a tradition that has not been broken. And in the interest of gender equality, as first gentleman, Bill Clinton may want to perform the domestic duties traditionally performed by first ladies. Or not.

“Just put more on her plate,” jokes Hager. “Run the free world and pick out the china … I’m sure she’s capable of doing both.”

How First Gentlemen Dress to Accompany Their Powerful Spouses