Continue to The Hollywood Reporter SKIP AD
You will be redirected back to your article in seconds
Skip to main content
December 15, 2020 3:07pm

When live events start up again at the Beverly Hilton Hotel, guests to marquee happenings like the Golden Globes (where the show has been held since 1961) can expect to see some changes to the iconic 65-year-old property, starting with a redesigned main lobby. The new look is part of a just-completed $35 million renovation of the hotel spearheaded by Paul Duesing Partners (the firm behind such resorts as Las Ventanas in Cabo and Mukul in Nicaragua.)

“We wanted to make things a little bit more intimate,” says Beverly Hilton general manager Sandy Murphy of the redesign of the lobby. The changes add inviting upholstered furniture in soft taupe shades; marble-topped coffee tables with gold-metal bases; and accents with pops of teal, including rugs with a starburst design, a signature motif. “When the hotel opened in 1955, they commissioned an artist named Bernard Rosenthal to do an installation — they called it the Rosenthal Star,” explains Murphy. “It was this beautiful sculpture of this star that hung from the grand staircase. And one of the things that Conrad Hilton used to say about the hotel was, ‘A star is born.’” Though the sculpture is no longer there, she says, “we still have a piece of it in our Oasis Courtyard.” One thing that hasn’t changed is the lobby’s gleaming, textured gold murals by artist Nancy Lorenz — commissioned in 2005 — which have been preserved. 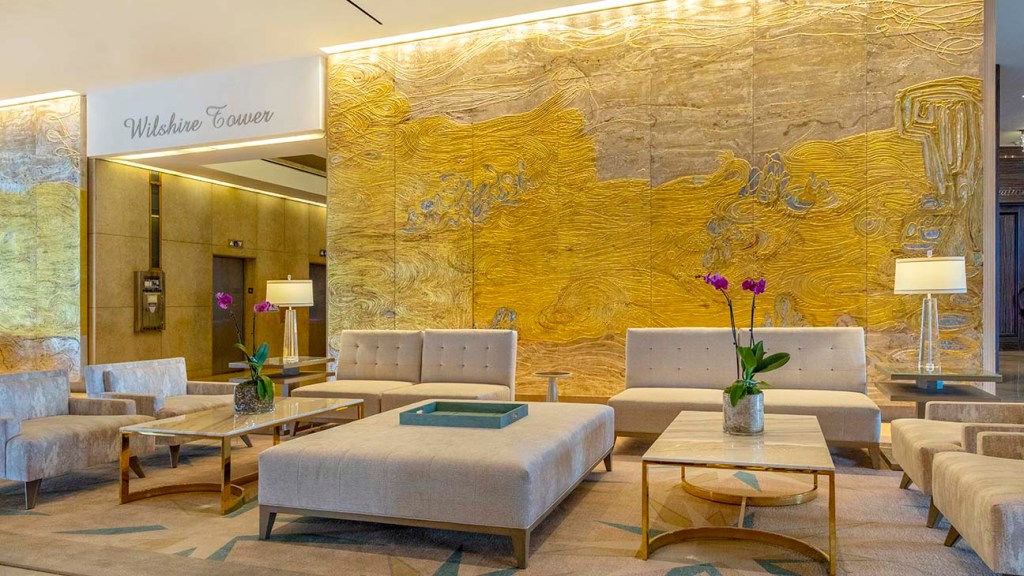 Around the lobby’s exterior glass wall, the hotel also added new seating areas. “There are great reading nooks for people to sit and soak in the sunshine,” says Murphy. All of the furniture can be moved for when large events return. “We need to be prepared to have 1,000 people in the lobby at the same time. It’s very flexible,” she says.

Of course, with COVID-19 vaccines not expected to be made available to the general public for months, large gatherings — such as 2021’s Golden Globes, which are likely to be a largely virtual show — won’t be returning anytime soon. So the hotel is working to figure out ways to reimagine events. “We’re looking at doing live-streaming events, which we definitely have the capability to do, and definitely looking at ways of socially distancing,” says Murphy. “We might have 200 or 300 people instead of the normal 1,200 people in the ballroom but be able to stream it.” The hotel will also promote its outdoor garden area — which was added a few years ago, when the neighboring Waldorf-Astoria hotel was constructed — which is adjacent to its Beverly Hills Ballroom. “We’re looking at indoor-outdoor meetings,” says Murphy. “We know people are more comfortable being outside.”

After having stayed open throughout California’s COVID-19 lockdowns, the Beverly Hilton, like all hotels in California, is currently available for booking only by essential workers. The new state orders have significantly cut back on guest stays at the property, which had been getting by partly because of the number of L.A. locals checking in for staycations. Business was holding up “especially during the summer,” says Murphy. “You know we have the largest heated pool in Beverly Hills. We were getting quite a few people who wanted to feel normal. We socially distanced the chairs by the pool.” She adds that the Hilton, like many hotels, “changed a lot of our food and beverage — everything is wrapped or served in individual bento boxes.” The hotel also instituted new, advanced cleaning protocols and acquired disinfectant devices, including a Xenex LightStrike germ-zapping robot and EMist electrostatic sprayers. 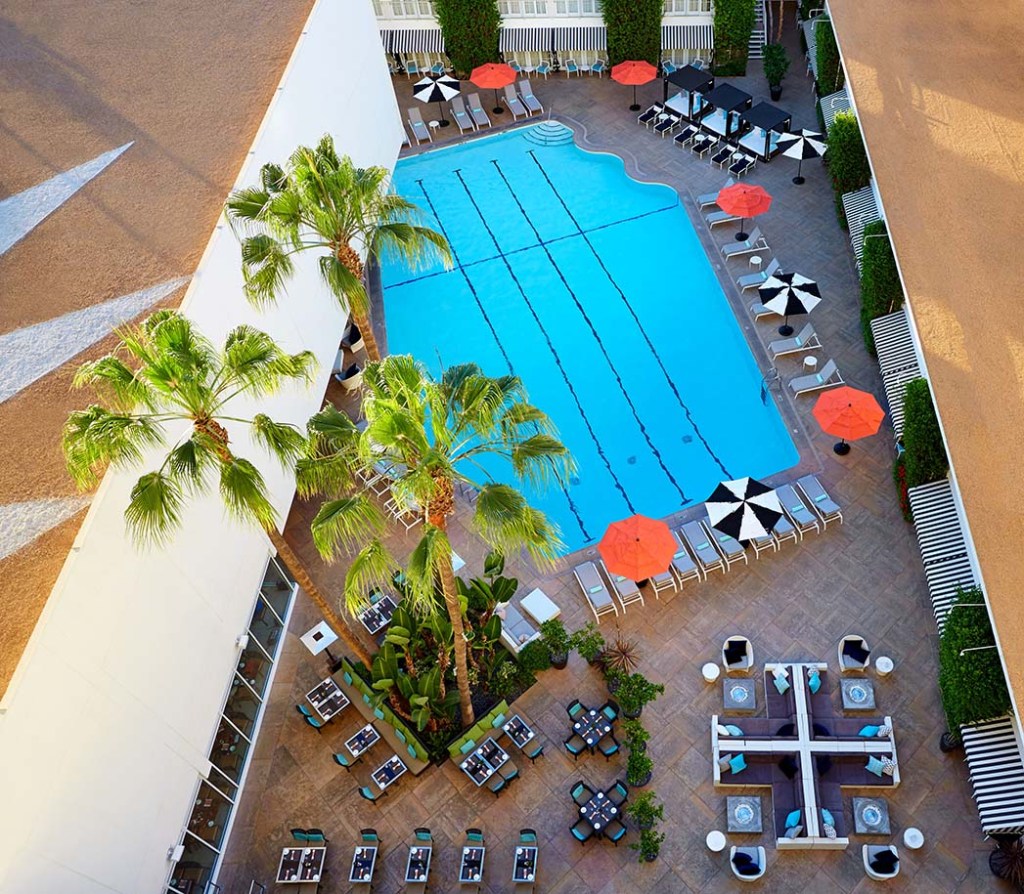 The renovations aren’t confined to the lobby. The hotel also added a new outdoor poolside eatery called Mercato, which offers grab-and-go meals, and is currently working to add an outside dining area to its Circa restaurant. Additionally, every one of its 566 rooms was redesigned, while its main Wilshire Tower building, which has 352 rooms and eight floors, got a top-to-bottom redo, completed in September. “We took everything down to concrete and drywall. We redid the rooms and completely reimagined them,” says Murphy. As in the lobby, the furnishings have accents in teal colors. “We also used the starburst design motif in the rooms with such things as handles,” says Murphy. Bathrooms were redone as well. “Everything in the bathrooms was a little dark. We went in completely the opposite direction. Now the bathrooms are white porcelain tiles and white fixtures with better lighting,” she says.

Additionally, the number of rooms was reduced by three in the Wilshire Tower, allowing for the creation of the hotel’s new 890-square-foot Signature Suites, featuring two bathrooms and living and dining areas. “One of the things we think is unique is we have those floor-to-ceiling windows in our rooms and the majority of our rooms in the tower have balconies,” adds Murphy. “We spent a lot of attention and added some really incredible outdoor furniture. When you are in California, you want to be outside.” 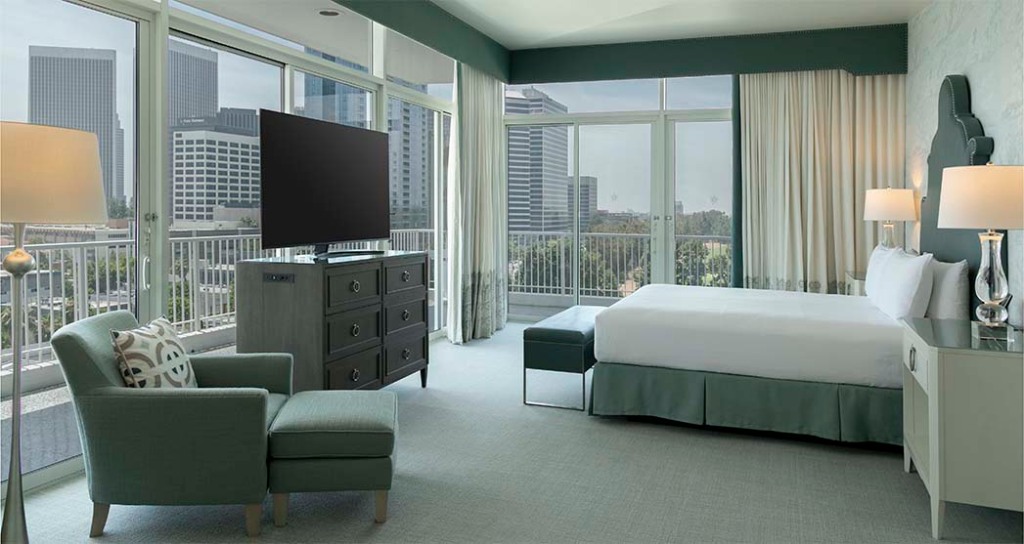 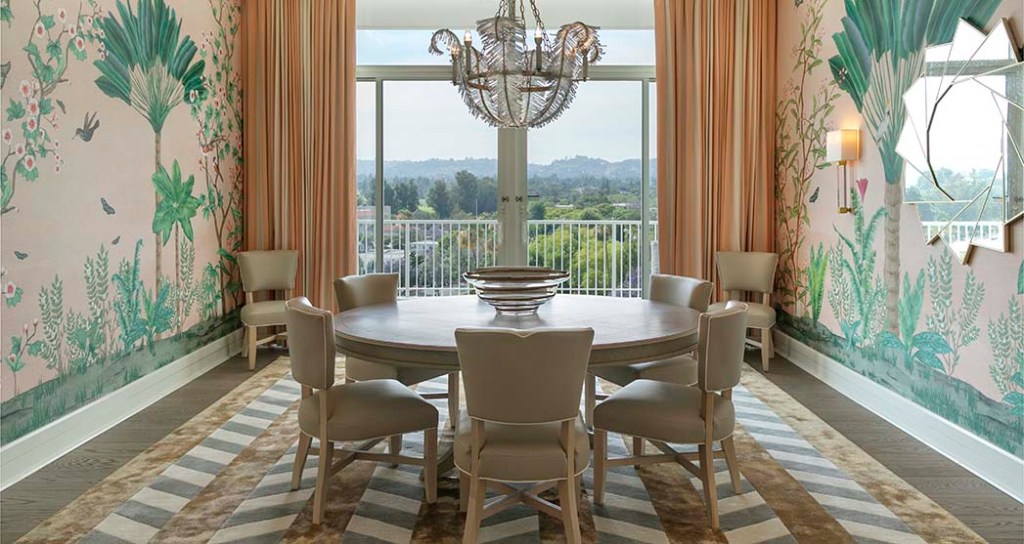