Continue to The Hollywood Reporter SKIP AD
You will be redirected back to your article in seconds
Skip to main content
June 21, 2017 10:49am

Until Frederic Malle — born into the family that made Parfums Christian Dior famous — launched his eponymous company, fragrances either fell into the category of a luxury designer or celebrity scent. But in 2000 when he began giving renowned perfumers total free reign to create without boundaries or restrictions for Editions de Parfums, he changed the game, kicking off a new era in which other indie brands like Le Labo could thrive.

On June 21 the first West Coast outpost for Frederic Malle opens on Melrose Place—surrounded by Gallic friends including A.P.C. and Vanessa Seward. Finding the perfect location was a journey in and of itself, Malle tells THR, adding he briefly considered Santa Monica, Brentwood and Silver Lake — not Rodeo Drive, however: “it’s very corporate, very urban, and not what I really like about L.A. Melrose Place with its village-y feel was ultimately the right fit in a city he likens to “London with palm trees.” 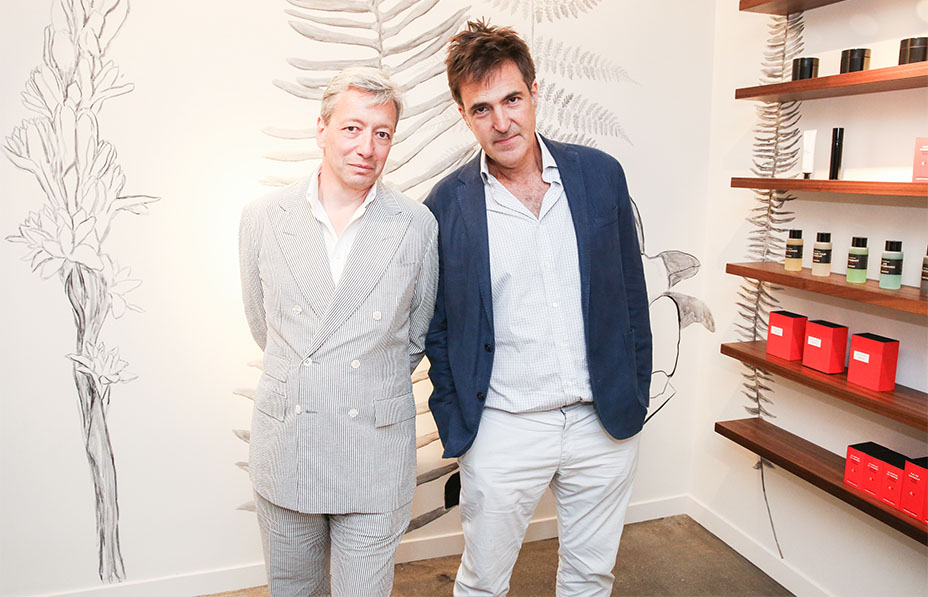 Malle says, “Doing a store in L.A. has always been a desire, but also a challenge for me because it’s such a different aesthetic. There’s so much freedom. You drive through the streets and you have a mini Estancia, then an English house, then an 18th-century house.” He looked The style is never the same, and what binds everything together is the vegetation — this lushness.” 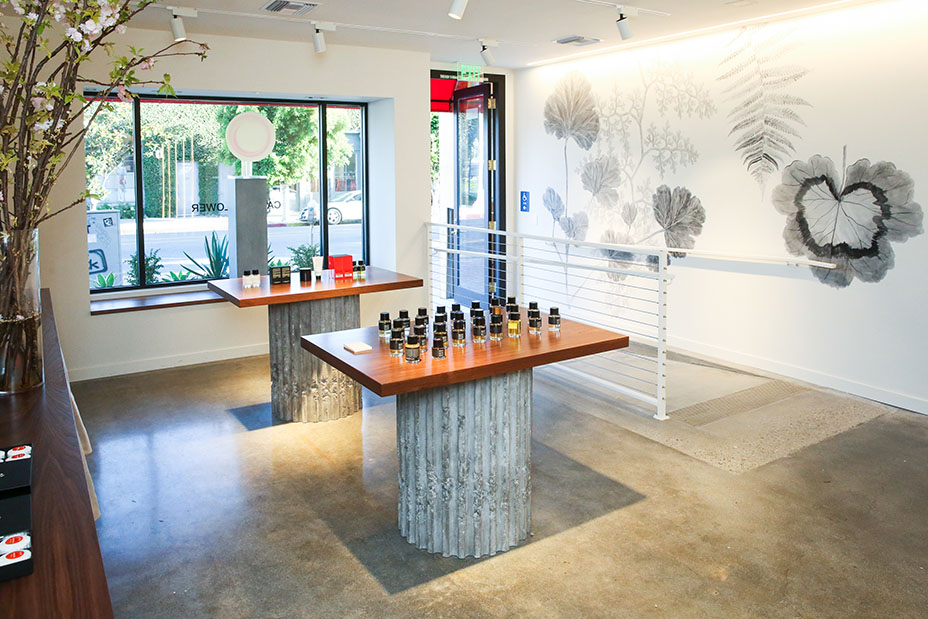 Greenery will be tied into the shop, for which the fragrance mastermind partnered on design with L.A.-based artist Konstantin Kakanias — who illustrated Malle’s book, On Perfume Making. Kakanias hand-painted a black-and-white fresco that wraps across the first room’s four walls, embellished with flowers sketched with the perfumes in mind. Another room in the 1,200-square-foot boutique — which also has a private outdoor garden  — is swathed in deep purple printed Peter Dunham fabric and has an 18th century desk and elegant Prelle sofa at its heart. “It’s like a version of my house, like I’ve done in Rome and Paris originally,” Malle says. “There is a corridor that’s refrigerated and lit with all the perfumes.” 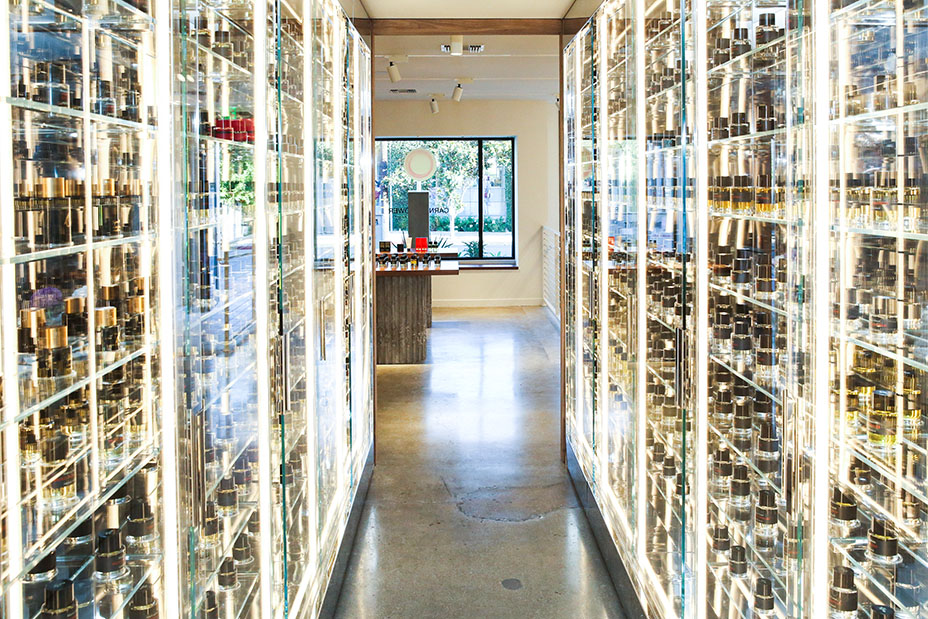 Inside, customers can hang out or get right to the point if they know what they want. Malle says he likes to let people look around, but prefers staff to “quite quickly engage in conversation. It’s all about them.” Fragrance is truly personal, he believes, and the 24 fragrances on offer (they’ll never retire any, because they’re each works of art) represent the best of each category. “It’s like a palette for the perfume experts to really cater the right fragrance to the right individual,” he says. “They know their fragrances very well, but they have to know you and understand why you want to wear a fragrance and how you want to come across — squeaky clean, mysterious.”

To Malle, “perfume is a way to seduce, to say, This is how I am. The best part of me is …” He sees it as affordable couture, likening a bottle to buying a haute couture dress for $400. His favorite part of the process, though, is discovering someone’s fragrance personality is different from what he expected — someone who looks like they’d want a “Virgin Mary smell” (very light, slightly rosy with lily of the valley and lilac) but actually is drawn to something very sexy. Malle says he judges those he meets by their scent. “If you wear the most banal fragrance in the world it’s quite likely you’ll be amazingly boring,” he says. “I’ve become prejudiced by smelling people, but oftentimes you’re in for a great surprise.” 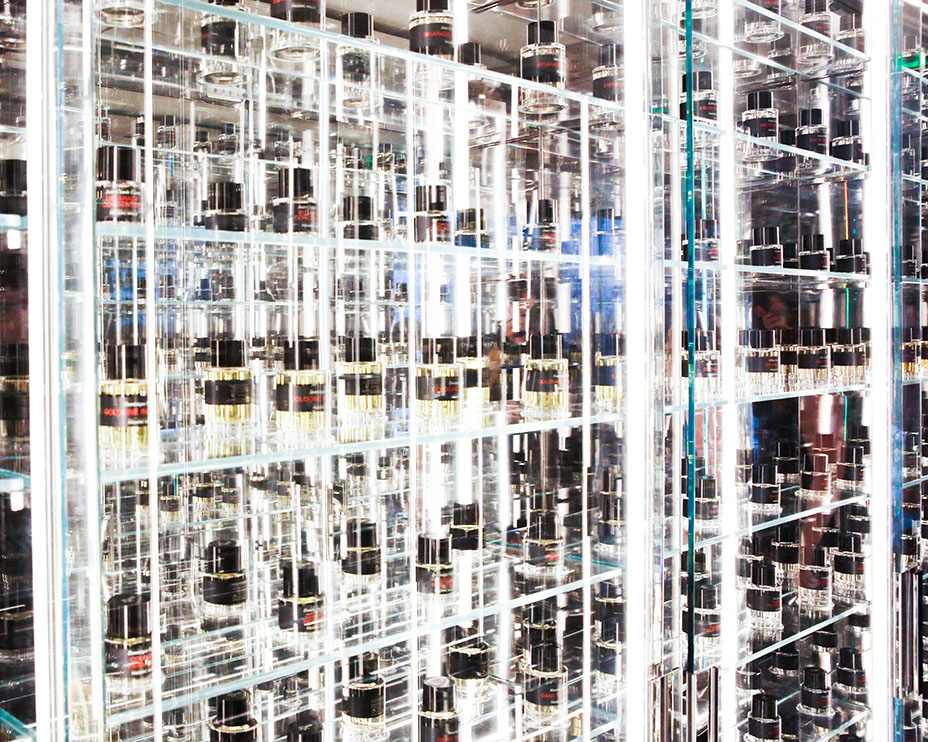 It’s the one-size-fits-all tendency of best-selling fragrances that he continues to protest with his output, which elevates perfumery to art and puts the juice front and center. Also the idea that a scent has to be for men or women only. Branding is such a huge piece of a luxury fashion house’s perfume business, and when Malle began he had no budget for major campaigns — and no interest in pigeonholing a scent with one image or face. “People could sort of decide if it was for them or not.”

He doesn’t see fragrances as unisex or not unisex, instead as sexual or asexual. Advertising is always about seduction, and when gender was very specific, “you had to choose a side. Now we are making fragrances like Musc Ravageur that would work on a man or woman. The sexiest fragrance works on both — the dark patchoulis, ambers.” Portrait of a Lady is another he finds many men (both straight and gay) wearing, despite the name. 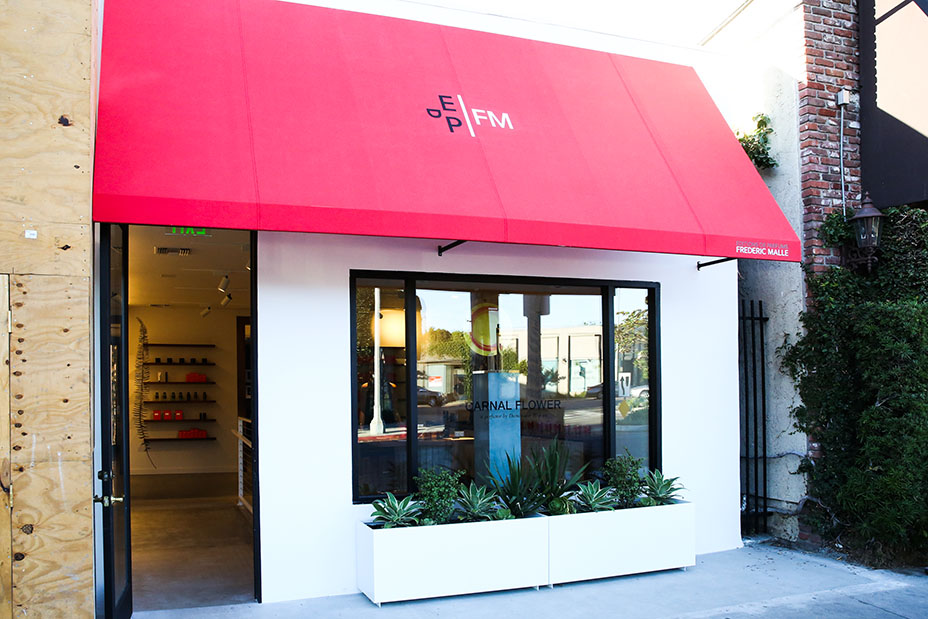 Even more important than sexuality or orientation, Malle feels the place affects the scent he wears. He even smells fragrances in several different cities before finishing them. “You don’t see things in the same way here as in New York or Paris.” L.A., he feels, is the land of white flowers like jasmine, neroli and tuberose, the latter featured heavily in Carnal Flower, a cult favorite that was inspired in part by the City of Angels and launches in a travel set July 1. “I’m always drawn to — and believe it’s for everybody — white flowers when I’m here. There’s something refreshing about it that is exactly right for L.A.”