More than 30 years after helping to establish Malibu’s stylish retail scene, Fred Segal is ready for its coastal comeback. Known for opening Los Angeles’ first denim bar in 1961 and first setting up shop in Malibu in 1975 for a decade-long run, the pioneering retailer soft-opened a new shop at Malibu Village last week that is officially making its debut this Saturday, with a slew of grand opening festivities.

The iconic brand’s signature California-cool aesthetic is on full display in the seaside shop, but don’t expect it to play up its proximity to the surf and sands. “What you won’t see in here is a huge swim collection,” Fred Segal CEO Allison Samek tells The Hollywood Reporter. “What we tried to do is cross over the love of our Fred Segal store with a more playful seaside feel; it’s a Fred Segal store in a community where the beach is such a vibrant part of their soul — [but] it’s not a swim-based store.”

At 4,000 square feet, the light-filled space is about a third of the size of Fred Segal’s Sunset Boulevard flagship, a frequent shopping destination for Hollywood and fashion insiders. (Angelina Jolie, Rachel McAdams, Dave Chappelle and Maison Margiela creative director John Galliano are just a few who have reportedly shopped there repeatedly this year.)

On offer is the retailer’s Fred Segal Originals line of branded women’s and men’s graphic-print tees, sweats, jean jackets, blazers and hats, as well as candles, tote bags and mugs ($24 to $398). 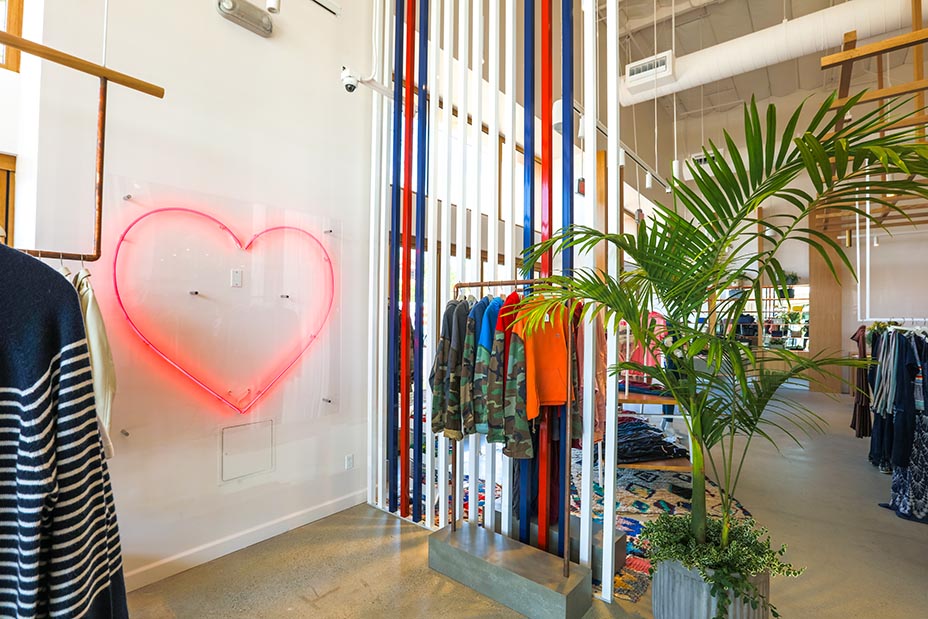 Womenswear is curated by luxury retailer Maris Collective, which also has locations within high-end hotels such as the Four Seasons in Hawaii, Costa Rica and Florida. Expect to find established designers mixed in with cult-cool labels (Proenza Schouler, Shaina Mote, Staud and Whit) as well as plenty of denim (including 3×1, Grlfrnd, Re/Done and Mother) and casual-luxe staples.

Rounding out the women’s offerings are fashionable fitness apparel and footwear from Alo, Year of Ours, Pe-Nation and Athletic Propulsion Labs; bags by direct-to-consumer accessories brand Senreve ($125 to $895); fine jewelry from L.A.’s own Sophie Monet and Loren Stewart; eco-friendly sneakers by French fair-trade label Veja; and heels from Australia-based By Far.

As to what’s stocked in those signature shop-in-shops? There’s a corner filled with army jackets from Miami-based C Bonz (which previously had a space at Fred Segal in Santa Monica) that can be custom-embroidered on-site, as well as an entire wall of footwear curated by L.A. luxury boutique Madison that’s stocked with European and cult-cool designer labels such as Casadei, Calleen Cordero, Chloe Gosselin, Officine Creative and more.

The Hollywood-loved boutique is located at the prime corner spot previously occupied by Malibu Cinemas and boasts open doors on all of its street- and sidewalk-facing walls, as well as floor-to-ceiling windows, giving passersby a clear view into the store. Fred Segal devotees may notice the absence of its infamous ivy walls on the exterior — due in part to the city of Malibu’s notoriously tight permitting rules (which is also why the store doesn’t house an in-store cafe like its West Hollywood counterpart). Instead, the iconic greenery is represented inside the shop as part of a massive mural that’s visible from the outside.

“We really wanted an open feel from the store to the street, to the ocean, to the breeze,” says Samek. “So on a nice day, it’s a completely open structure. It almost feels like it’s an indoor/outdoor [boutique]; we really wanted the whole feeling of the community, so the doors are open and welcoming to people coming in and shopping and talking and hanging out.” 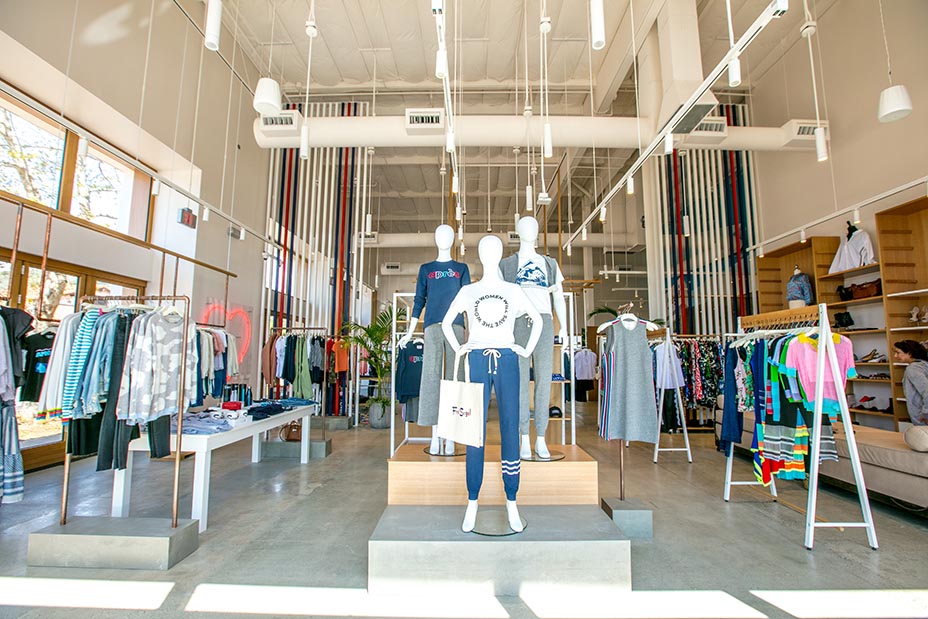 One sure conversation starter is a chicken coop that will soon be added to the store’s Astroturf lawn, where a Mini Moke jeep (sure to delight the little ones) is also parked. It was the idea of Maris Collective co-founder LeeAnn Sauter. “She loves her chickens and she’s like, ‘You know what? I think they want to be up in the breeze and the sun,’ and so she’s going to bring a little coop up here,” explains Samek.

Fred Segal first opened in the coastal city in 1975 at Malibu Country Mart, the upscale shopping center co-founded by the entrepreneur and L.A. retail icon. (The Segal family is no longer involved in the business; a majority stake of the Fred Segal brand was acquired by Global Icons last month, while Evolution Media Partners—a partnership between talent agency CAA, Participant Media and private equity firm TPG Growth —maintain a minority stake.)

Samek says that while the retailer has eyes on several other L.A. cities for potential stores, the company is looking to export its SoCal cool overseas by way of international openings. Fred Segal already has a store in LAX International Airport (which opened in 2013); last year it rolled out outposts in Switzerland, Taiwan and Malaysia.

This Saturday and Sunday will bring a host of events that capture the original spirit of Fred Segal’s (the businessman’s) family-friendly approach to retail. Segal installed a playground at his original Malibu store so parents could shop as their kids played, adds Samek.

From 1 to 5 p.m. both days, partygoers can shop fair-trade artisanal decor and home goods at The Little Market’s trunk show (the lifestyle shop co-owned by Lauren Conrad and Hannah Skvarla), enjoy aura readings, mini makeovers by Sephora (including for kids) and a selfie-ready floral mural inspired by Fred Segal’s ivy wall by Sea Lily Malibu. There will also be dessert bites from Sweet Laurel Bakery, coffee by Café Luxxe and margaritas by Casamigos, while a 1970s Volkswagen bus-turned-photo booth will be parked at the shop to capture Insta-ready moments.

where meets the / please join us this weekend, april 5-7 for the grand opening of @fredsegalmalibu watch our Stories for all the exciting details!