Weaponizing feminine wiles for acts of revenge takes the phrase “power dressing” to a new level in Promising Young Woman. Carey Mulligan’s vigilante avenger Cassie is a study in contrasts, where costumes serve as a facade, armor and a symbol of seduction.

Costume designer Nancy Steiner created the protagonist’s day and night looks using sex-kitten Brigitte Bardot as an influence. For her daytime life working at a coffee shop, Cassie appears in a feminine mix of pink rose-patterned sweaters and pastel floral dresses and a signature Bardot French-braid ponytail, glossy pout and multicolored pastel nails. “While my initial instinct when reading the script was to go dark and depressed, Emerald [Fennell, the director] wanted her personal style sweet, flirty, feminine and light to serve as a facade,” she tells THR. “I have to hand it to her, it was a great twist.” 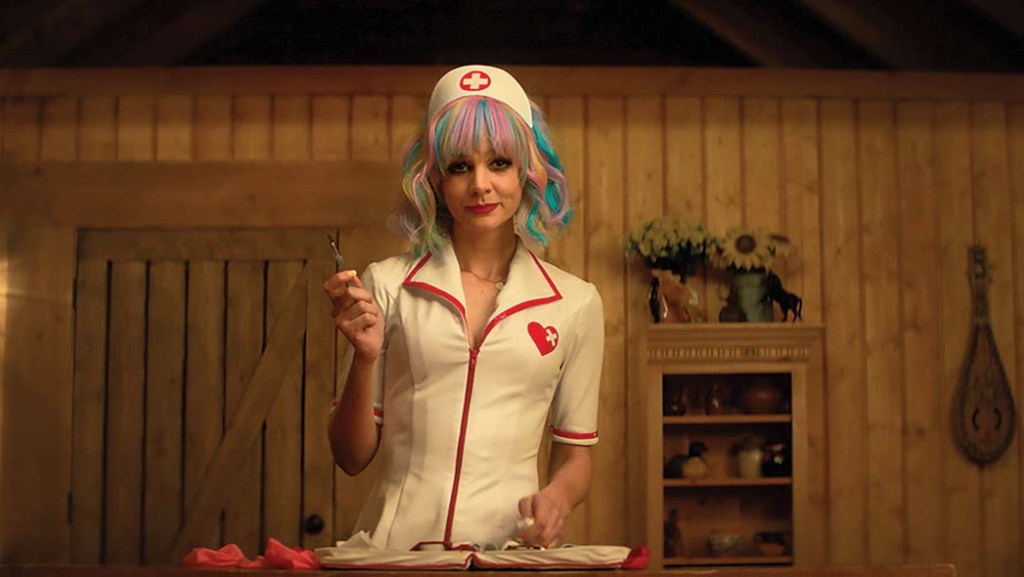 For Cassie’s evening jaunts, when she transforms herself into a faux-inebriated club patron, the designer chose her chameleon looks based on the location — she dresses in a traditional suit and white shirt with a tousled, messy bun for a business bar; she dons a short sequin dress, long ponytail and gold hoop earrings at a Euro-style nightclub. Completing her nighttime after-hours bar look, makeup department head Angie Wells created a “dark, overheated, drunken” makeup palette — smudged eyeliner and mascara and a full lip imperfectly drawn.

Perhaps the most memorable costume appears in the film’s finale as Cassie attends a bachelor party disguised as a stripper. “For her look as a naughty nurse, we added lace and a zipper in front based on the cheesy costumes I had seen online,” she says. Hair department head Daniel Curet added to her look with a rainbow-colored wig that is actually two wigs sewn together. “The wig was chosen because Emerald wanted a costume feel. The whole point was we want people to dress like this for Halloween, so let’s create a character,” he notes.

Drawing natural correlations to supervillain the Joker, Wells went full-on seduction with a mix of comic-book whimsy, resulting in “a sort of blow-up doll, wide-eyed, giant glossy lip look,” she details. “It had a sexy sinisterness to it, and you could see the sadness behind the pain like the tears of a clown.”