After three decades of blazing her path, Ruth E. Carter made history this year as the first black woman to win the Oscar for best costume design for her work in Black Panther. Now, Carter and her colleagues of the Black Design Collective are determined to create an environment in which up-and-coming black designers will receive the opportunity and recognition they deserve. In Los Angeles on Saturday night, the Black Design Collective (BDC) honored Carter for her accomplishments, while further shedding light on adversities black designers face behind the scenes and how they’re taking steps to change the narrative.

“When I started, so many years ago now, I had a dream to be a costume designer. That’s all I wanted,” Carter told the crowd while accepting her honor during the BDC’s first annual scholarship tribute at FIDM. “I wanted to be able to tell your stories, to tell my stories, to tell the stories of my ancestors. I wasn’t so focused on blazing every path. I was just trying to blaze my path,” she continued. “[But] I didn’t have those mentors that you see here today with the Black Design Collective.”

The Black Design Collective is helmed by fashion designers Kevan Hall, Angela Dean and TJ Walker, whose combined star clientele includes Oprah, Katy Perry, Bruno Mars and Madonna, to name a few. But these designers’ names have long gone unrecognized, prompting them to form the BDC, which officially launched in February, offering new designers hands-on mentors, guidance and exposure as well as help developing, producing and marketing their products globally.

“We want to be an answer. Some of these problems have perpetuated in different ways,” Dean told THR prior to the event. “It’s a silent message of being not included. That becomes a problem because when you’re talented and do the work, [you’re] not being seen. No one knows who we are. We’re like a quiet breath of air that’s making loud noise.”

Notable figures such as Tina Knowles-Lawson and Gabrielle Union came out to support Carter and the BCD’s mission. “We talk a big game about diversity and inclusion, but those are just words,” Union said in her speech honoring Carter. “We talk a big game about mentorship and putting people on, but are we really doing it?” Union has worked with Carter on a number of projects and specifically recalled their collaboration on Being Mary Jane, which ultimately led to Union’s line at New York & Company. “Every fitting I’ve ever had with Ruth was in her home. She welcomes us in. She makes us feel protected. She literally gives us wings so we can all fly,” Union continued. “She made Mary Jane a fashion icon. That wasn’t me.”

One notion that Carter, the Collective, Union and Knowles-Lawson all shared with THR was the responsibility that stars have to get  black designers recognized. Dean, who was a major part of Madonna’s iconic bullet bra (and never got the recognition for it) spoke to her experience. “Unfortunately, when a lot of my A-list clients go on the Oscars red carpet and say my name, it will never end up in print the next day,” she said. “When you’ve done mostly black films, black celebrities, you’re not looked at as being relevant. They would always ask me, ‘Who are your Caucasian clients? Do you have anyone else?’ on a regular basis. No, seriously.”

Carter gave her input to THR on the red carpet:  “It’s an uphill battle to be recognized. We can’t say that we’re competing with conglomerates, like Armani and Prada. Those are corporations,” she said. “It’s also up to the actual celebrities who are wearing their garments to say loudly, ‘I’m wearing Kevan Hall.’ That’s part of taking your p.r. into your own hands …It’s very important you let them know that’s who I am.” 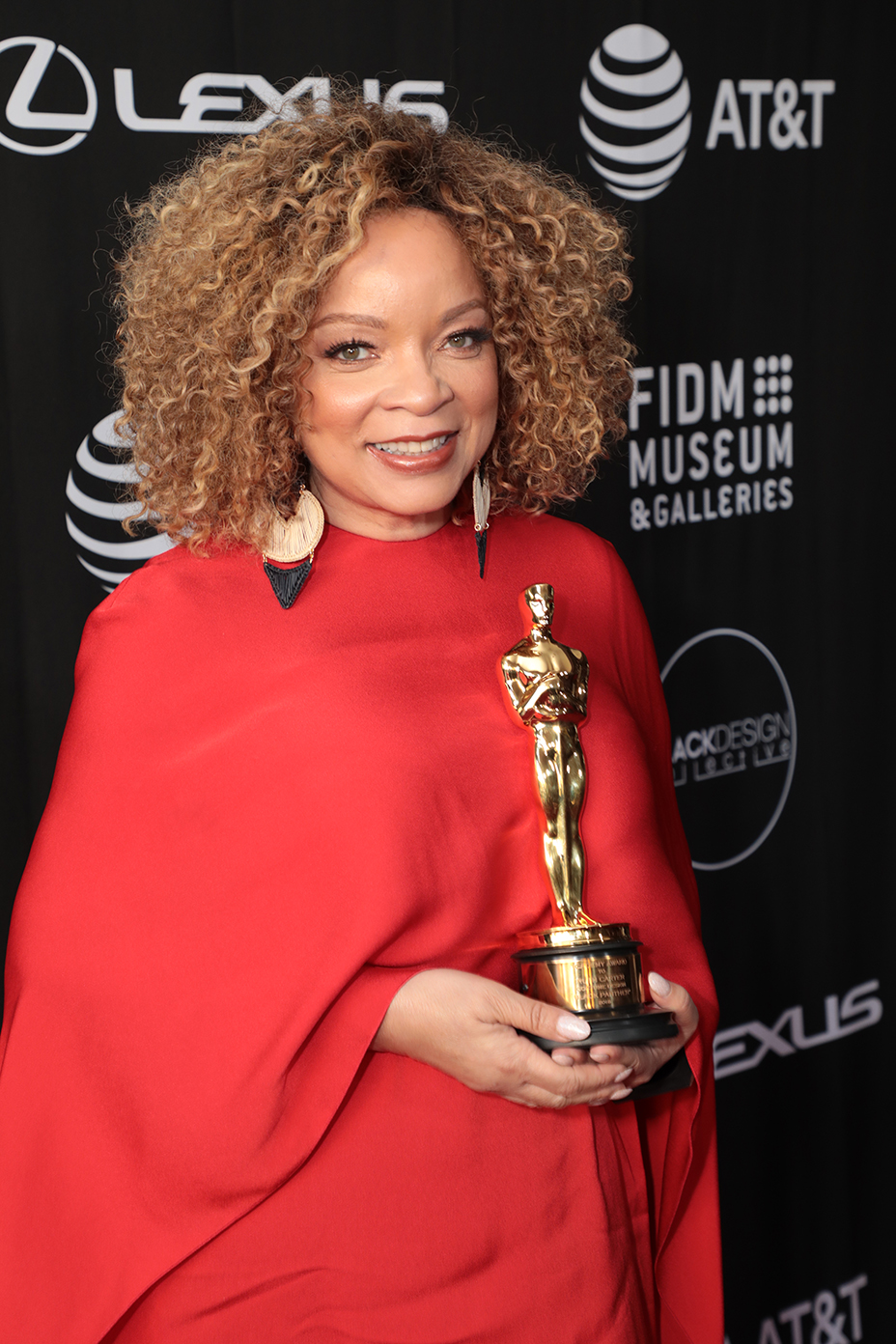 Union shared on the red carpet that, behind the scenes, people constantly “push” A-listers to wear notable designers. “[They] say that, in order to be a fashionista or a fashion darling, you have to wear these certain designers, and a lot of times that skips designers of color, and specifically black designers,” the actress said. “It’s a matter of just putting it on your body.”

Knowles-Lawson, who styled Destiny’s Child, shared about her and her famous daughter’s conscious efforts to give black designers recognition. “When we were doing the show in Africa, that is what Beyonce mostly wore and, on tour, she wore a lot of black designers,” said Knowles-Lawson. “We try to discover new black talent and put it out there.”

Knowles-Lawson also opened up about Beyonce’s ode to black excellence in her iconic 2018 Coachella set. “She said, ‘Mom, let them go research it and figure it out, so that they could learn about the culture and black kids could feel good about black colleges,'” she recalled. “‘If I get black kids to be interested in going to black colleges, then I’ve done my job … It’s about doing what’s right.'”

As Hall explained to THR, people and retailers are reluctant to welcome the unfamiliar. “Retailers and stores, they really are like sheep,” he said. “You just have, frankly, a bunch of millennials crunching numbers, looking at spreadsheets. They’re not people spotting the talent. They’re looking at ‘What does Bloomingdale’s have? Macy’s? The Limited?’ And everybody jumps on the same thing. Even Neiman’s and Saks. It’s all the same merchandise.”

Dean chimed in, “It’s always behind the numbers. And they’re scared that if the numbers don’t come in that they don’t have a job.”

Carter’s Oscar win, while long overdue, has been a major step in opening eyes. “I think it’s about time the playing field got evened a little bit,” Hollywood stylist Elizabeth Stewart told THR on the red carpet. “I want to come out and support that concept and be here to catch people on the way up. There’s been a big movement and I want to ride it.”

Union spoke to Carter’s win as well, saying, “It really is about change. It really is pulling up more chairs to the table, to the proverbial table, and if they don’t allow us to pull up our own chairs, then we kind of say, ‘Fuck it,’ and build our own house.” Union added that black inclusion in Hollywood expands far beyond design. “It’s about hiring more, and giving people more opportunity top to bottom, all along our call sheet, and making sure that it’s truly representative of the world. Your crew should look like the world.”

One word that encapsulates the BDC is “inspired.” Carter told THR on the red carpet: “I’m inspired because it helps other designers, It’s a big responsibility. It’s a huge responsibility. And, you know, I’m only one person.”

Beverly Johnson, the first black woman to be on the cover of Vogue in 1974, said the adversity fuels her fire, while on the red carpet: “I’m familiar with it. It does not stop the creative process and our dreams.”

After three decades of hard work and grit, Carter has more than an Oscar to celebrate her work — she has the global fan reactions to Black Panther. “We all knew the royalty that was there that we could bring to the foreground,” she said in her speech. “That’s why you responded. You responded by wearing your African garments to go see Black Panther because deep inside of you, there was that sense of royalty and pride for your African heritage.”

Now the BDC is working hard to foster new talent with big dreams while continuing to make themselves seen. One scholarship recipient was in tears learning about his acceptance to the program, as he currently struggles to pay for school while taking seven classes and working three jobs.

With plans to expand to New York and Africa, and globally online, the BDC will continue to dole out multiple scholarships, and offer workshops and master classes, along with an e-commerce platform.

What keeps BDC driven versus discouraged, in the face of adversity? “Love for fashion, for creativity, for the process,” said Hall. “We don’t need validation from others to say we’re worthy or talented. We know we are.”