Stocked and staffed with the help of social media, the newly opened Champs-Elysees location of famed Parisian department store Galeries Lafayette marks a distinct 180-degree turn from the original Boulevard Haussmann location (frequented by the likes of Prince Charles and former President Bill Clinton). The new flagship is clearly aimed at a younger millennial-driven demographic, with a prevalence of high-end streetwear and the exclusivity that comes with scoring hard-to-find brands, many discovered on the pages of Instagram.

Guests enter the 6,500-square-foot space through an LED-lit tunnel to arrive in the marble-laden rotunda that formerly hosted the First National City bank in the 1930s, after Galeries Lafayette founder Thèophile Bader abandoned original plans to open a store there after the onset of the 1929 stock market crash. Now the former bank’s boardroom (dubbed “the speakeasy”) serves as an event space that also welcomes VIP customers in a private setting. Every Friday from 4 to 9 p.m., it converts into a hairstyling space occupied by Maison John Nollet Paris offering three dry-styling services. 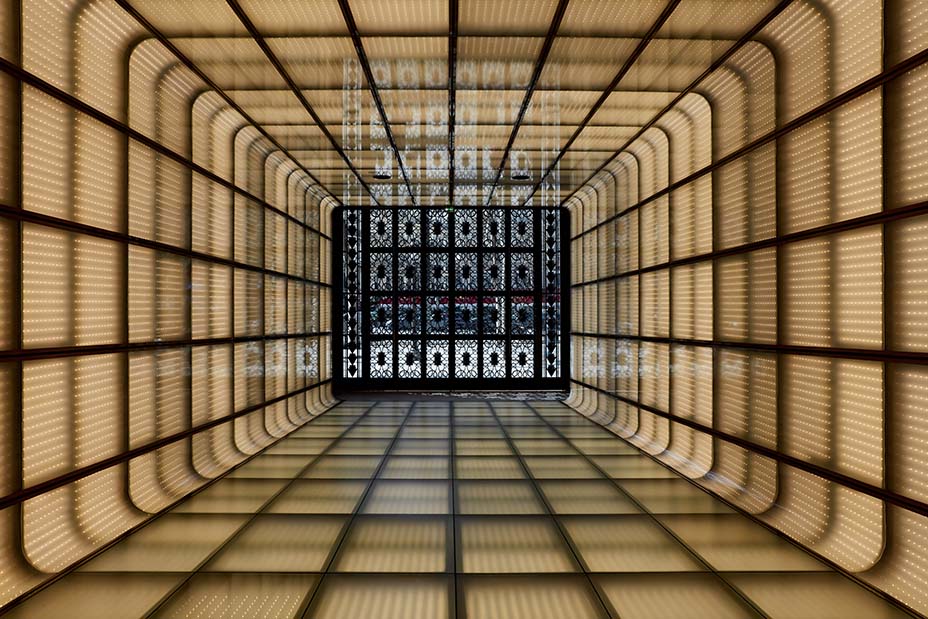 Ascend the marble stairs to discover unisex streetwear and emerging designers that one unnamed staffer said was meant to “fill the void that [Parisian] concept store Colette left when it closed.” Among them, Telfar tote bags and L.A.-based surf-inspired brand Noon Goons. The second level also stocks limited-edition products, special collaborations and labels that were previously unavailable in France in brick-and-mortar stores.

A new collab Nike sneaker, the neon patchwork and PVC atmos x Air Max 2 Light “Logos,” was a near sellout just a few days after the store opening. Coming soon is an exclusive Asics reissue stocked two months in advance of other retailers, and an exclusive MCM neon orange backpack and belt bag combo festooned with buckles and patches is on shelves now. Among the brands sourced from Instagram are Rixo London, Loq shoes and Paris 99 (a New York-based line based on the quintessential 1950s diner, heavy on rickrack, gingham and cherry zip pulls and buttons).

Beyond the store’s curated assortment of over 650 must-have brands, there are a Buy-Now Wear-Now shop filled with temperature-appropriate and culturally current merchandise, well-edited selections from System booksellers and trendy bear statues by Brooklyn-based artist Kaws. 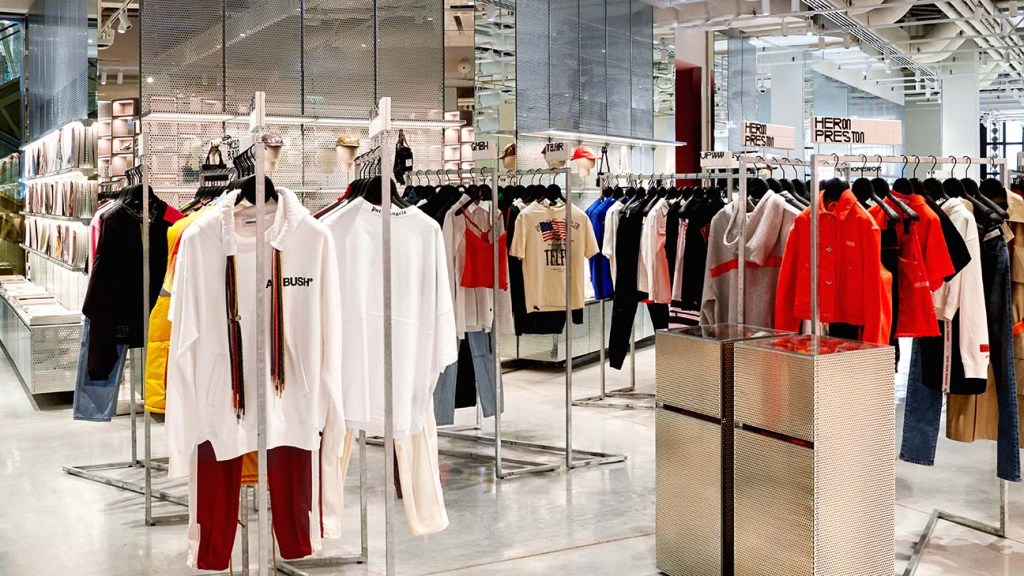 While each department houses a seasoned retail manager, 300 stylists on staff help customers make personalized selections. Many of the stylists have no retail experience, but were targeted on Instagram to apply based on their social media followings and aesthetic, and then trained, according to one stylist who previously worked as a graphic designer. Their sales acumen is enhanced by an exclusive “Personal Stylist 2.0” app, which allows them to connect with clients and arrange private bookings. A new patented “smart hanger” allows customers to see additional sizing availability and request to have garments sent directly to fitting rooms with a touch of a button. 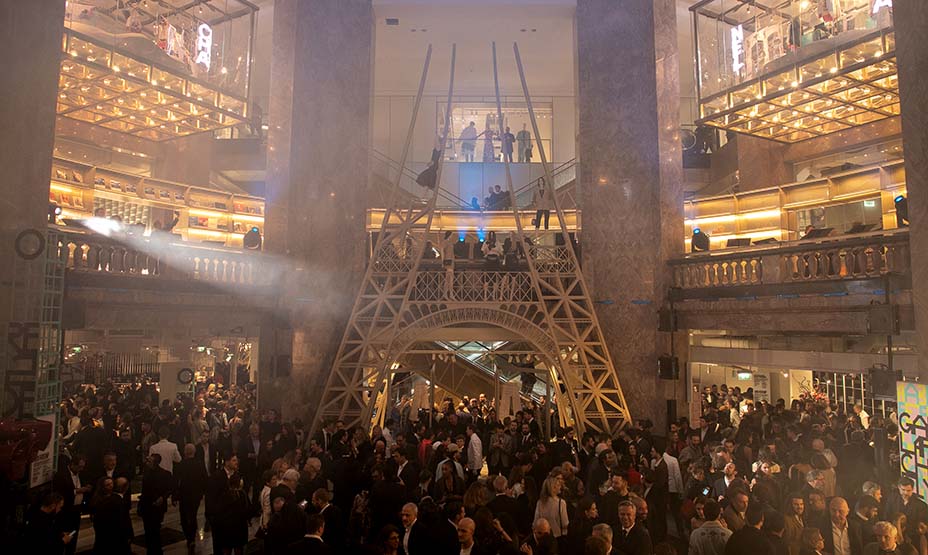 A third-level pop-up space is currently devoted to Chanel with a massive Eiffel Tower mock-up in the main entrance. An ode to Karl Lagerfeld and Coco Chanel, the capsules reference past runway shows such as la Brasserie Gabrielle, 31 Rue Cambon, and the various Parisian parks and gardens and scenes along the Seine that both designers adored. Chanel-owned ateliers such as the jeweler Goossens, Maison Michel and Barrie round out the temporary shop-in-shops.

Galeries Lafayette also has outposts in Dubai (where Johnny Depp met with a group of children with special needs last week), Berlin, Jakarta, Beijing and Istanbul, with six more global locations in the works. This latest Paris location hosted a kickoff with almost every Parisian designer of note — Kim Jones, Rick Owens, Natacha Levi-Ramsay, Glenn Martens, Pierre Hardy, Inès de la Fressange and Simon Porte Jacquemus, who also designed the new Citron Café in conjunction with Kaspia group and is at work on a second in-store restaurant, Oursin, due to open in July. 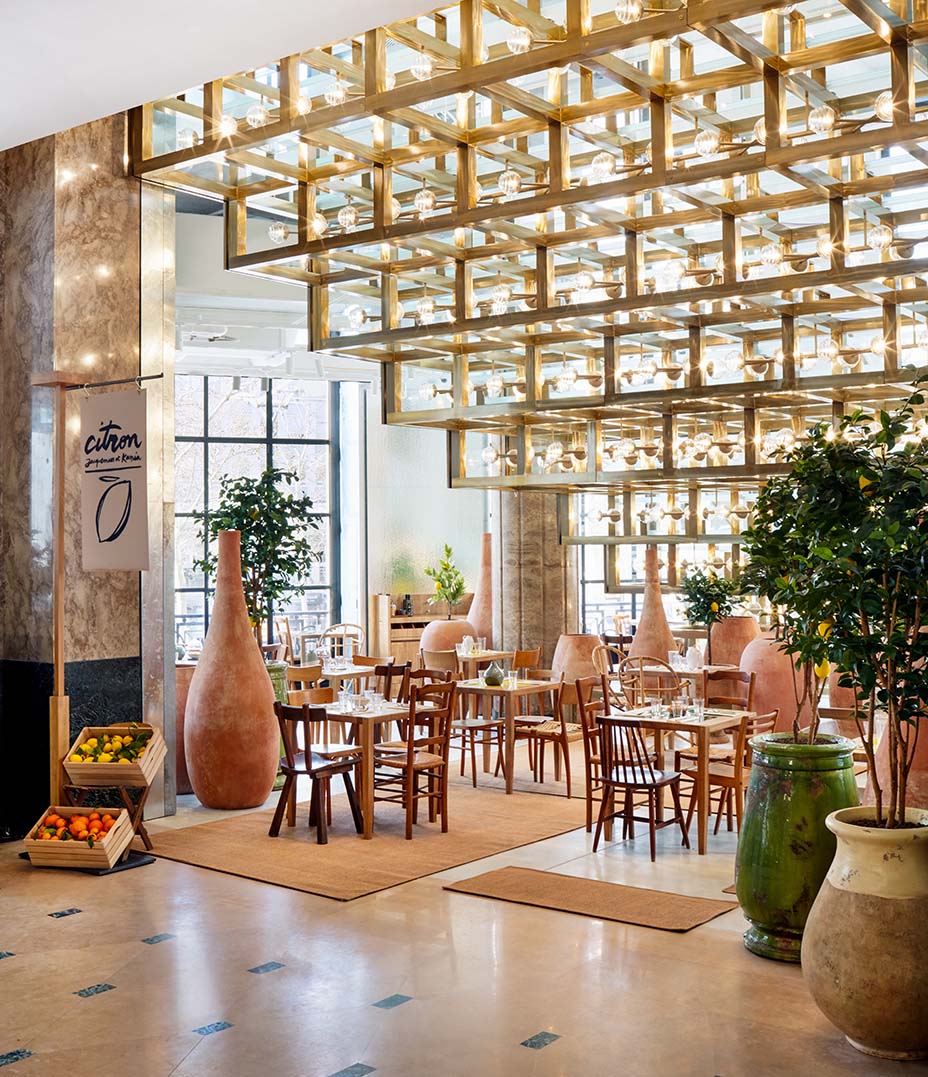