Looking to awards season, what it means to be “best-dressed” is being redefined by a new crop of activist-celebrities who prize their own natural beauty, individuality and social values above the latest fashion trends and see the red carpet, in tandem with social media, as a platform to speak out for issues and causes.

“My clients don’t want to conform,” says stylist Jason Bolden, who works with Yara Shahidi, 18, Storm Reid, 15, and Sasha Lane, 23. “And they are very conscious about what a brand actually stands for. Sometimes they educate me!” he adds, noting that Dolce & Gabbana, for example, whose designers made controversial statements on social media about same-sex families, has fallen out of favor among the activist set, while Prada, Calvin Klein, Chanel, Tory Burch and more under-the-radar labels like Preen, Off-White and Pyer Moss are in. 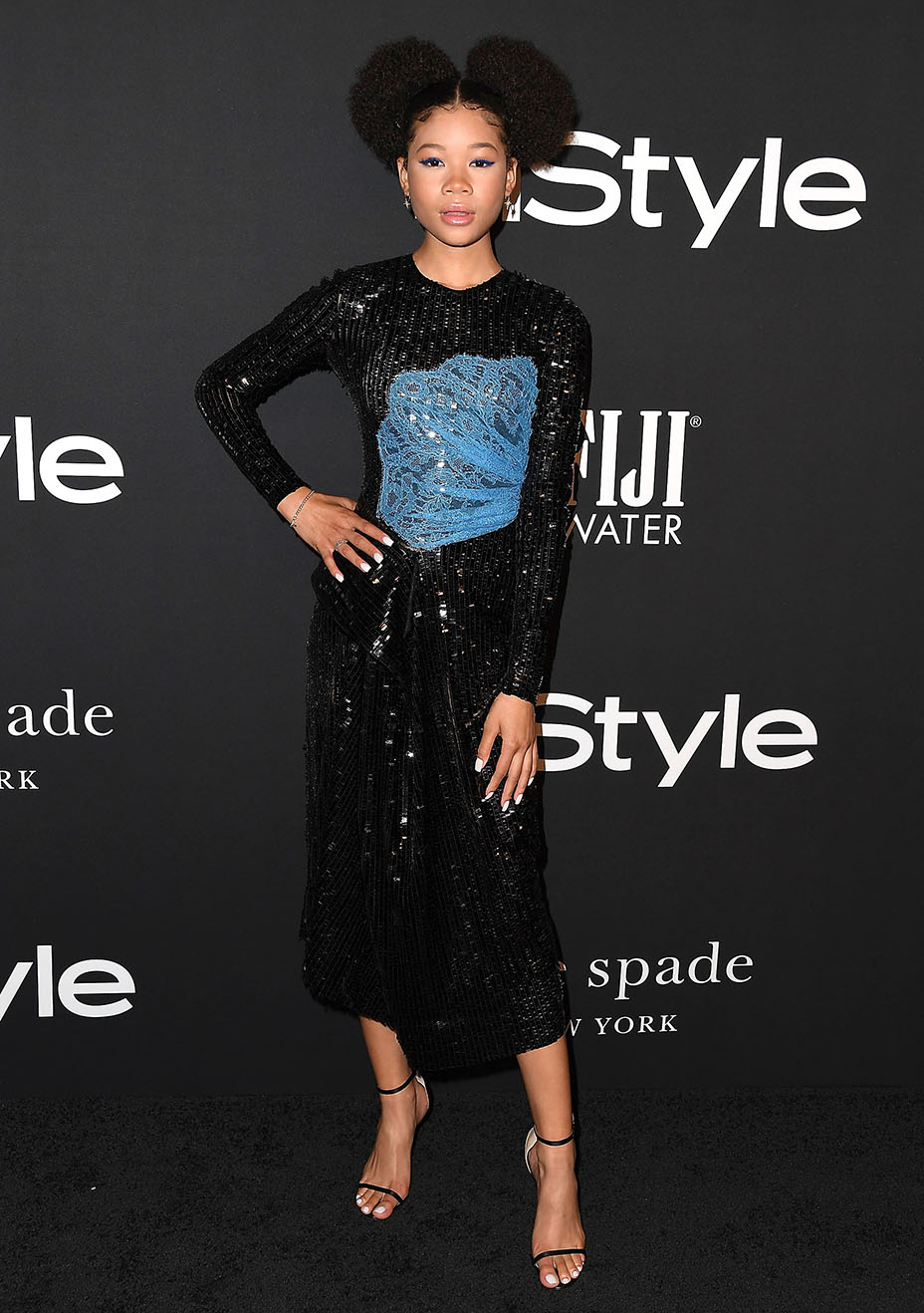 Maeve Reilly, who works with Hailey Baldwin, 21, considers it part of her role as a stylist today to be a fashion watchdog, for example when the Russian couture designer Ulyana Sergeenko posted a racist slur on Instagram. “At Paris Couture Fashion Week, a bunch of options were sent to the hotel room from Ulyana for Hailey to try on. I felt a responsibility to share the backstory, and we decided not to wear them.” 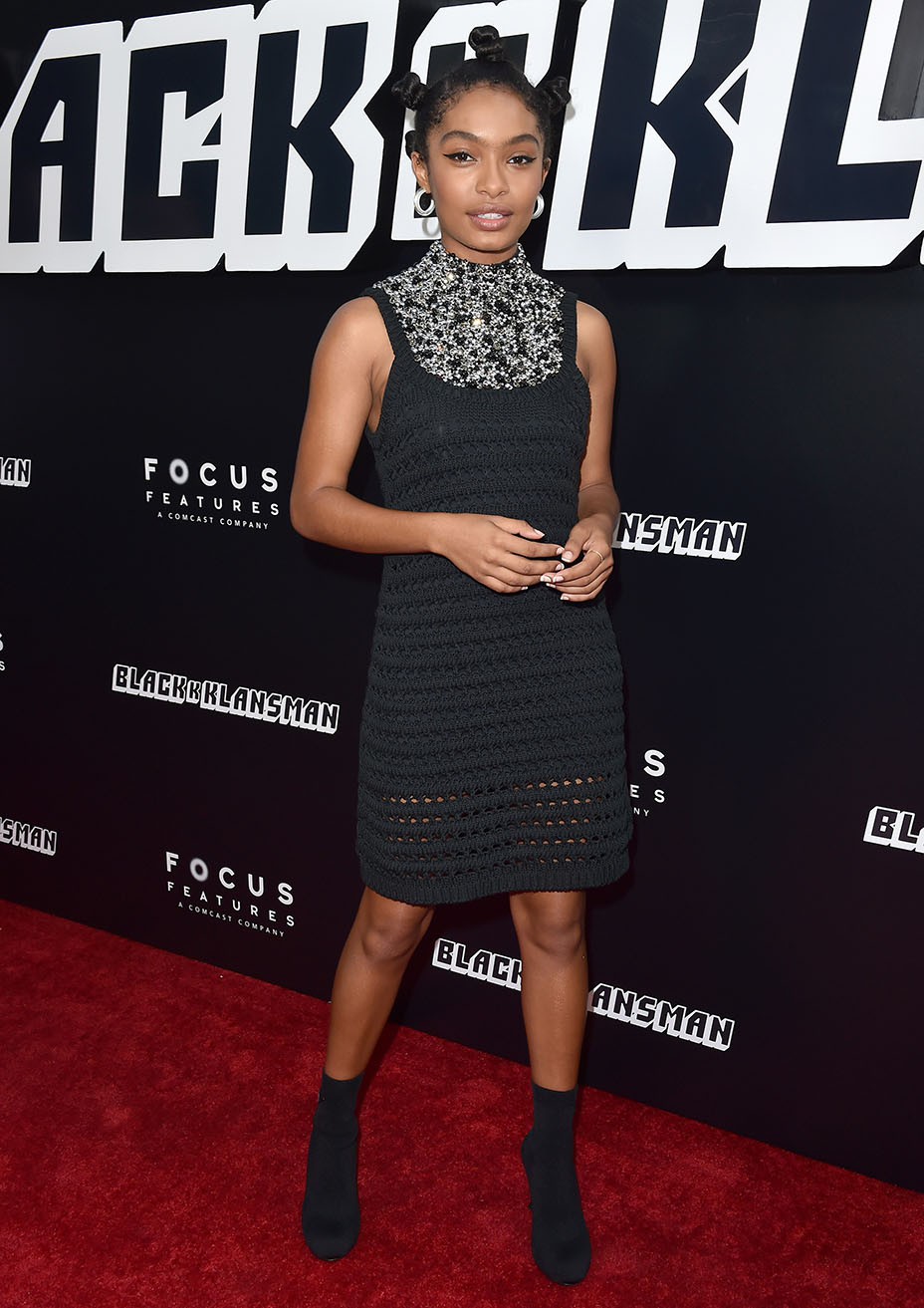 “Stars are connecting with brands that encourage their point of view” — and their individual look and natural beauty, says Bolden, adding, “Not everyone sees the ‘luxury’ in dreadlocks. But the brands that don’t are going to die out.”

It’s all in the details (Swipe) ? Fashion is inherently political and I’m proud to pay homage to leader Angela Davis and serve as a reminder of the work we have to do to de-criminalize public perception of black and brown bodies – we deserve to do more than survive, but thrive.

For an industry event in April, Shahidi wore a Prada skirt in an Angela Davis tribute print “as a reminder of the work we have to do to decriminalize public perception of black and brown bodies,” she wrote on Instagram. She followed that up with a Prada short black crochet dress and bantu knot hairstyle for the August BlacKkKlansman premiere.

Millie Bobby Brown, 14, paid homage to the Parkland school shooting victims at the 2018 Kids’ Choice Awards with a custom Calvin Klein denim shirt printed with their names and “March for Our Lives,” posting to Instagram a thank-you “to my friends at Calvin Klein for being such a champion of important causes and efforts to create positivity in this world.” 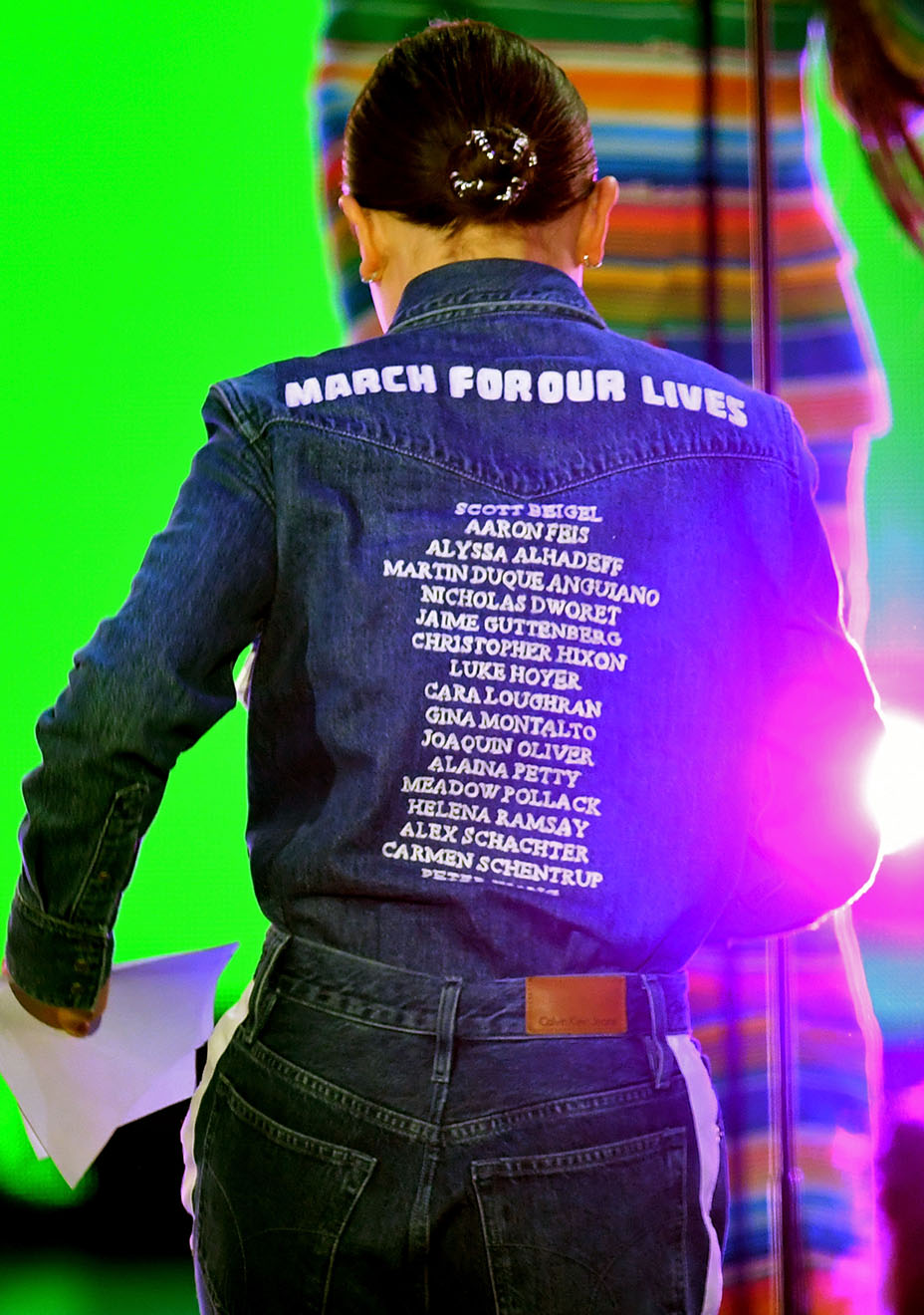 For the Emmys, Stranger Things star Sadie Sink eschewed big luxury altogether and chose to wear a custom gown designed by actress Rooney Mara and her made-in-L.A. vegan fashion brand, Hiraeth. “She and Rooney are friends. [Sadie] is vegan and Rooney’s team had reached out and said they would love for Sadie to be the first person to wear the line because she’s a great representation of the company,” says Sink’s stylist, Molly Dickson. The show’s 16-year-old star Gaten Matarazzo wore special-edition Converse with his tuxedo, to raise awareness for his CCD Smiles charity, which helps children with the same cleidocranial dysplasia genetic disorder the actor has. “He wanted to wear those so there would be discussion about it,” says his stylist, Lulu Bernard. 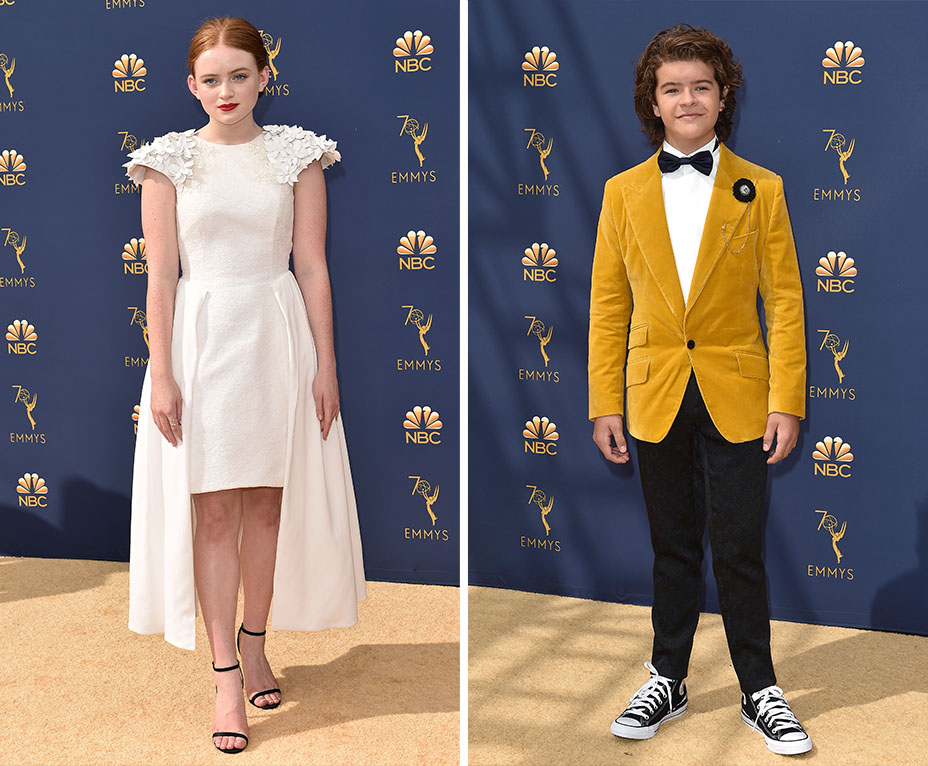 With the Gen Z Hollywood crowd, the days of fashion houses dictating from the top down are over. “Some girls want to wear couture with sneakers,” explains designer Tamara Ralph of British couture house Ralph & Russo. Indeed, at the 2018 LACMA Art + Film gala, Paris Jackson, 20, wore her Gucci gown with the brand’s Flashtrek sneakers. 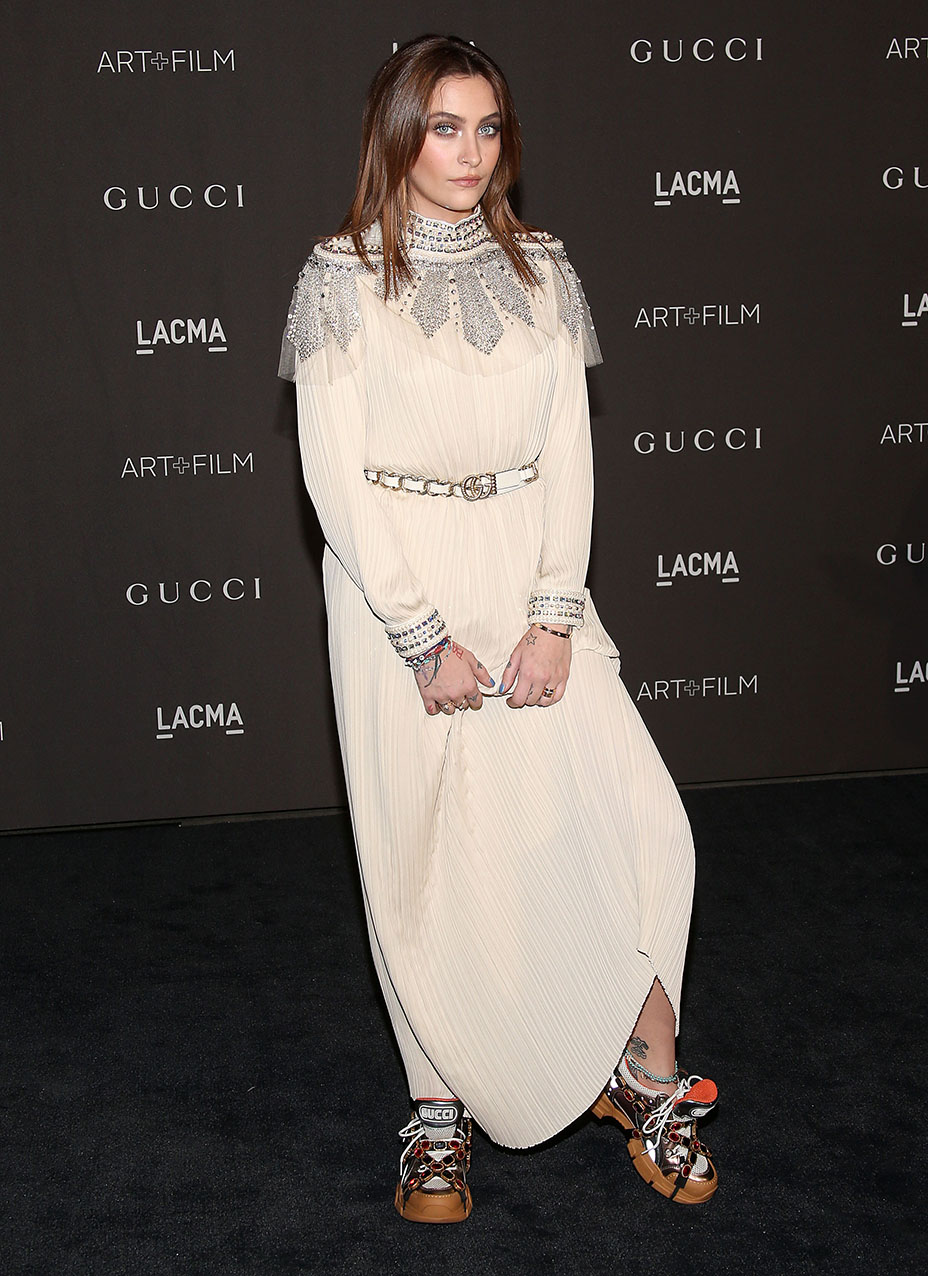 At the European premiere of The Hate U Give, Amandla Stenberg, 19, made fashion headlines for flouting beauty conventions and pairing her unshaven armpit hair with a Valentino gown, captioning on Instagram, “#drama #armpit.”

“People like Amandla are breaking the mold on the red carpet,” says her politically minded stylist Karla Welch, who says the star is just as comfortable in a “mega-gown” as she is in the Ralph Lauren tuxedo jacket and Levi’s jeans she wore to the American Music Awards.

Luxury houses are also looking to dress celebrities for “authentic” Instagram moments, says Reilly, whose client Baldwin has 15 million followers. “Brands used to only loan for press events or red carpets, but now Elie Saab wants to see his clothes on the street. They’re saying, ‘Wear it like you want, because we are getting just as much visibility that way and it feels more real.’” Call it the “click” fashion economy.

A version of this story also appears in the Nov. 14 issue of The Hollywood Reporter magazine. To receive the magazine, click here to subscribe.