Ahead of Sunday’s Golden Globes, stylist Mark Holmes headed over to Bill Hader’s home to get ready for the big night. Though Holmes admits that Hader loves his hoodies, “We’ve worked to a point where there’s an understanding that the hoodies have a place — just not on the red carpet,” Holmes tells The Hollywood Reporter.

For the Globes, he dressed the Barry creator (nominated for best actor in a TV comedy series) in a black velvet peak lapel tuxedo designed by Kim Jones for Dior. “A year ago the idea of wearing velvet would have been something that Bill would have turned his head or at least raised a skeptical eyebrow at, but we’ve come a long way! There’s a trust that we’ve built together, which has slowly allowed Bill to be a little bit more open to other options,” he says. 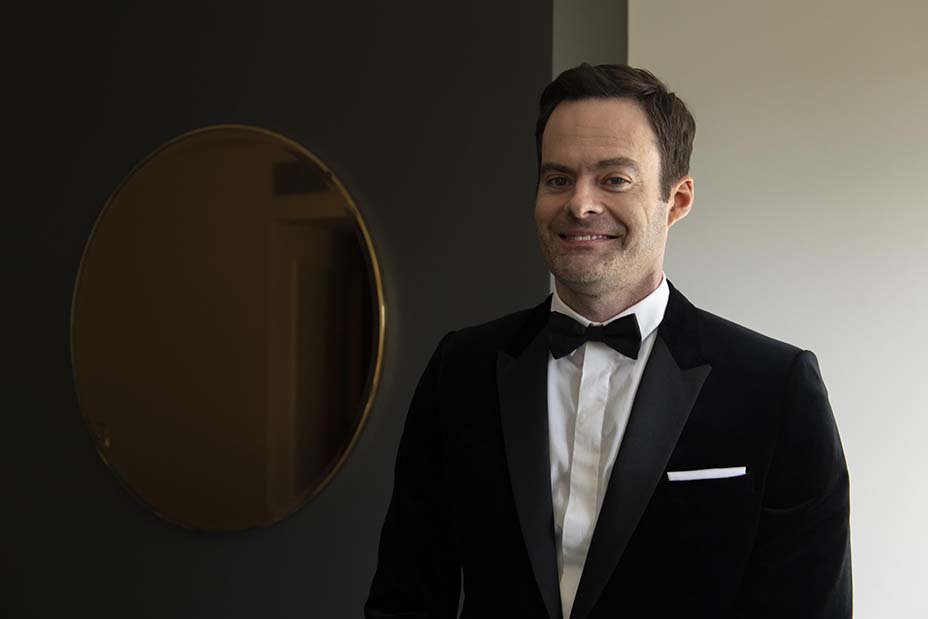 As for Hader’s thoughts on the look, he’s excited for one component in particular: “It’s velvet so I get to have my own lint roller,” the comedian jokes to THR. “Mark has been great at keeping it simple and making me comfortable. He also recently taught me how to stand when I get my picture taken so he’s a real jack of all trades.”

Holmes explains how he’s helped the Saturday Night Live alum elevate his style since they started working together. “For me it’s about finding subtle details to keep elevating Bill’s looks without it ever feeling forced or contrived. When I saw this velvet tux, I said to myself, ‘This is perfect!!’ The velvet adds an elevated feel to it, yet at the same time, is still classic and timeless. Bill’s career has definitely been elevated this past year, and it’s very important to me that his look evolves along with it.” 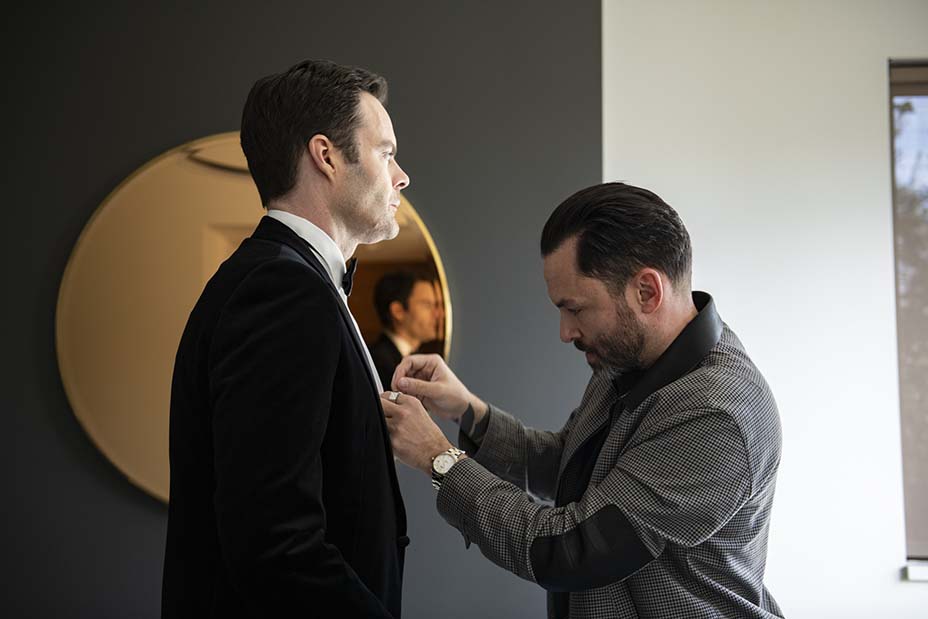 It all began five or six years ago when Holmes was backstage at SNL, styling The Shins band for their performance on the sketch show. “There was this guy Bill Hader nervously pacing up and down the backstage halls, frantically reciting his lines over and over, totally focused and in his own zone, oblivious to everyone. It was intense! I leaned over to my assistant and said, ‘I don’t think I could ever work with that guy!’ Well I was wrong! Fast forward five or six years later and I suddenly found myself rummaging through a closet overflowing with dozens of heather gray hoodies!”

He says after “editing” a few things out of Hader’s closet, they got to know each other better. “I instantly got a feel for who he is. Bill is instantly likable, charismatic and insanely talented. He’s a master at his craft, but he doesn’t want to be burdened by thinking about what he has to wear each day. I totally get that. A lot of guys feel this way, especially creatives!” 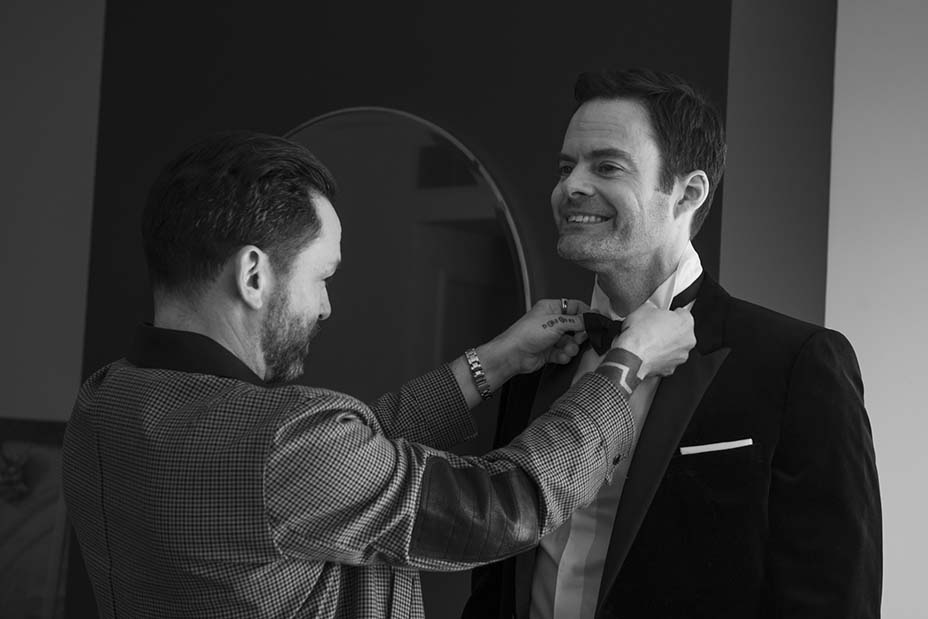 They simply “vibe,” Holmes says, in part due to shared interests. “We both love NBA basketball and have similar taste in music, so we just sort of talk about anything except the red carpet,” he tells THR. They have an “eclectic” taste in music, the stylist says. He made a playlist with Frank Zappa, Miles Davis, Herbie Hancock, Thundercat and a “great band” that his assistant introduced them both to, Flaural.

As for other rituals for getting ready for a red carpet, Hader simply teases, “I switch it up and drive the SUV they’ve hired for me. The SUV driver loves riding in the back. He usually stays out late, so I bring a book.”

Dior has been a go-to of theirs on the carpet, with Holmes explaining that he appreciates Jones’ approach to menswear. “There’s a level of excitement that he brings to his designs that obviously resonates with a lot of people,” Holmes says. “His designs are adventurous and exciting, but yet he still understands what is right for each individual and what they want, and is very open to working with others.” 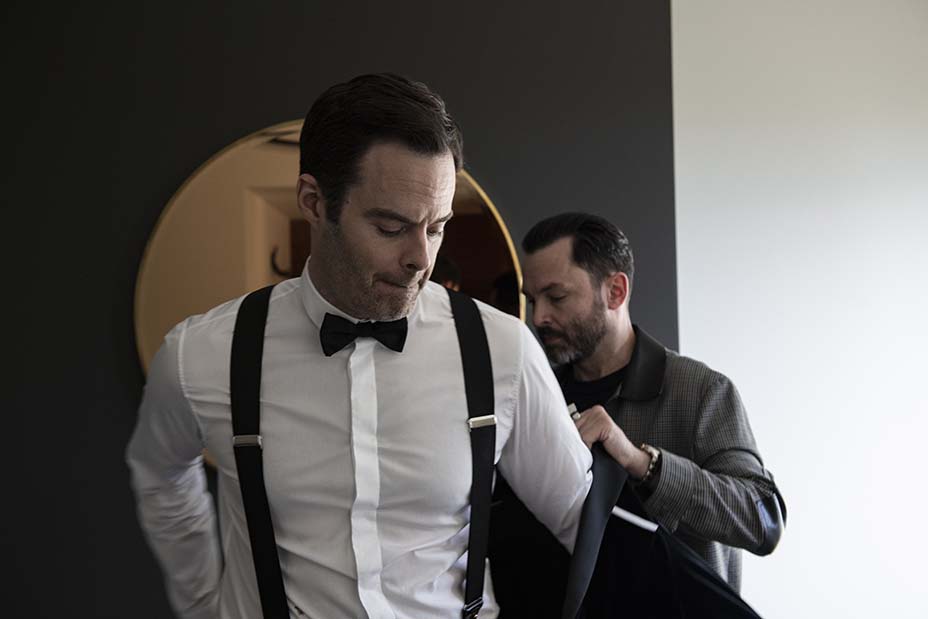 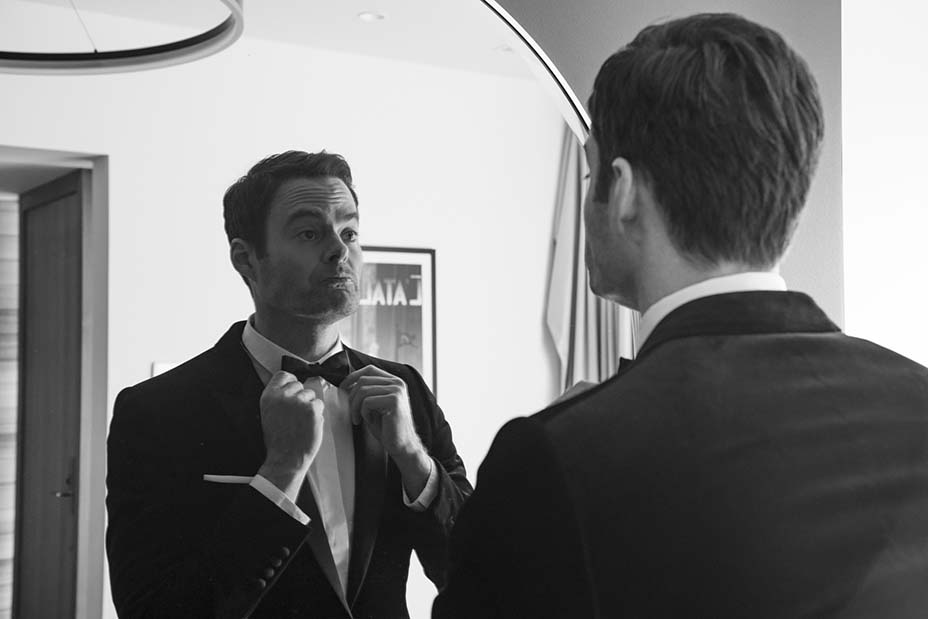