Her movie won a Critics’ Choice Award for best comedy, and actress Gemma Chan continued with her winning style streak at the SAG Awards. The Crazy Rich Asians actress wore a custom pink asymmetric Oscar de la Renta gown with a ruffled skirt selected for her by stylist Rebecca Corbin-Murray. 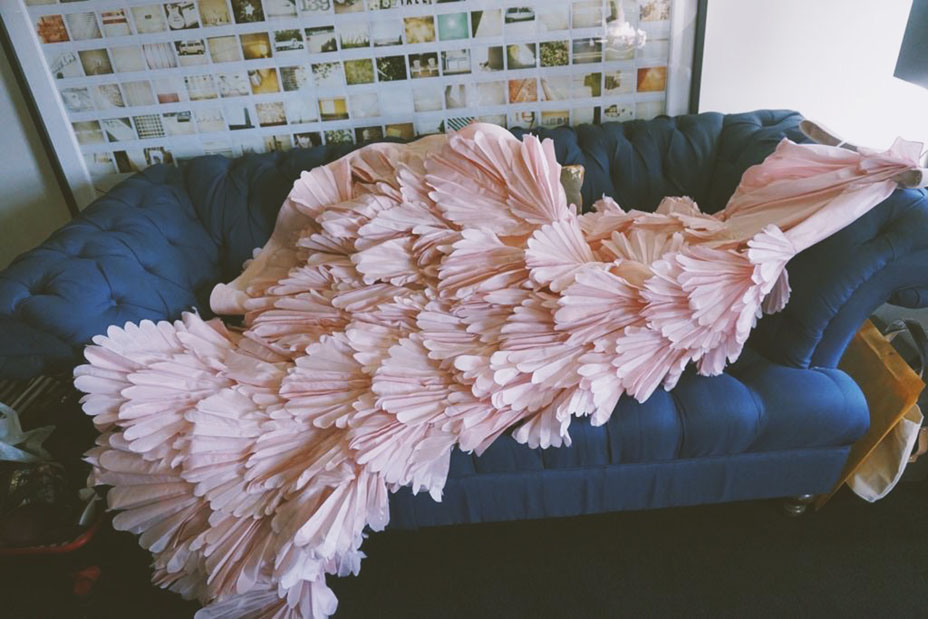 “For the SAGs, we were inspired by the golden age of Hollywood and the timelessness of actresses like Audrey Hepburn and Grace Kelly,” says Corbin-Murray. “We wanted something unique, playful and modern that would also stand the test of time.” Corbin-Murray also delved into the Harry Winston archives for the jewelry. “Vintage pieces have such a nostalgic appeal and so many stories and secrets attached to them,” she says. 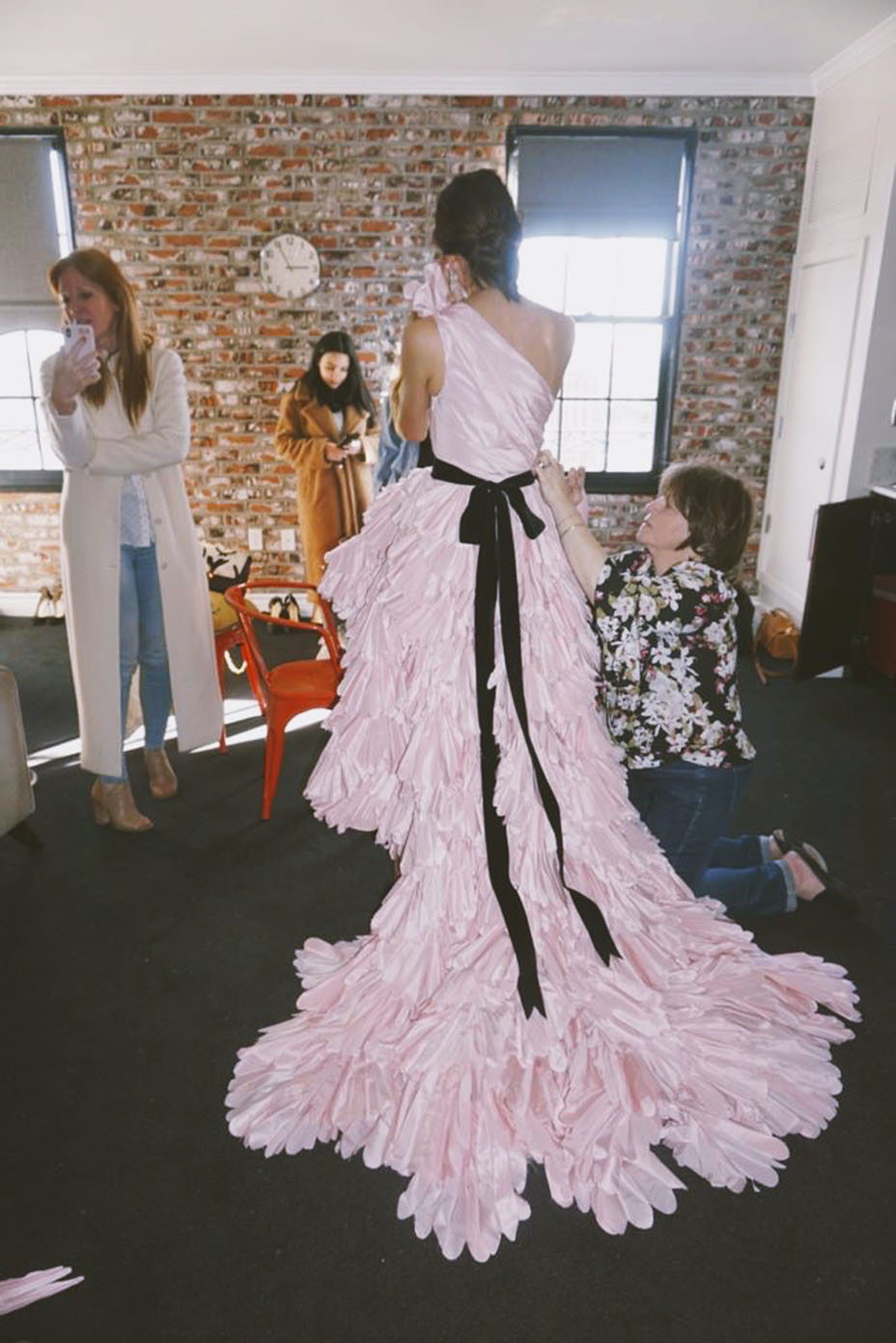 “The gown has an ethereal quality to it. In some ways, it looks like plumes and feathers, and then it also has this fragile, flower-like construction,” says Corbin-Murray, who also worked with Chan for the Critics’ Choice Awards and the Golden Globes. “The original gown idea was going to be black, but we really loved the idea of pink. Pink is feminine and powerful.”

Corbin-Murray also paid tribute to her seamstress, Orsalina, who worked on the final touches. “Les petites mains of Orsalina are magic,” she said. “She is our wonderful seamstress hand-finishing the gown to make sure everything is red carpet perfect.” 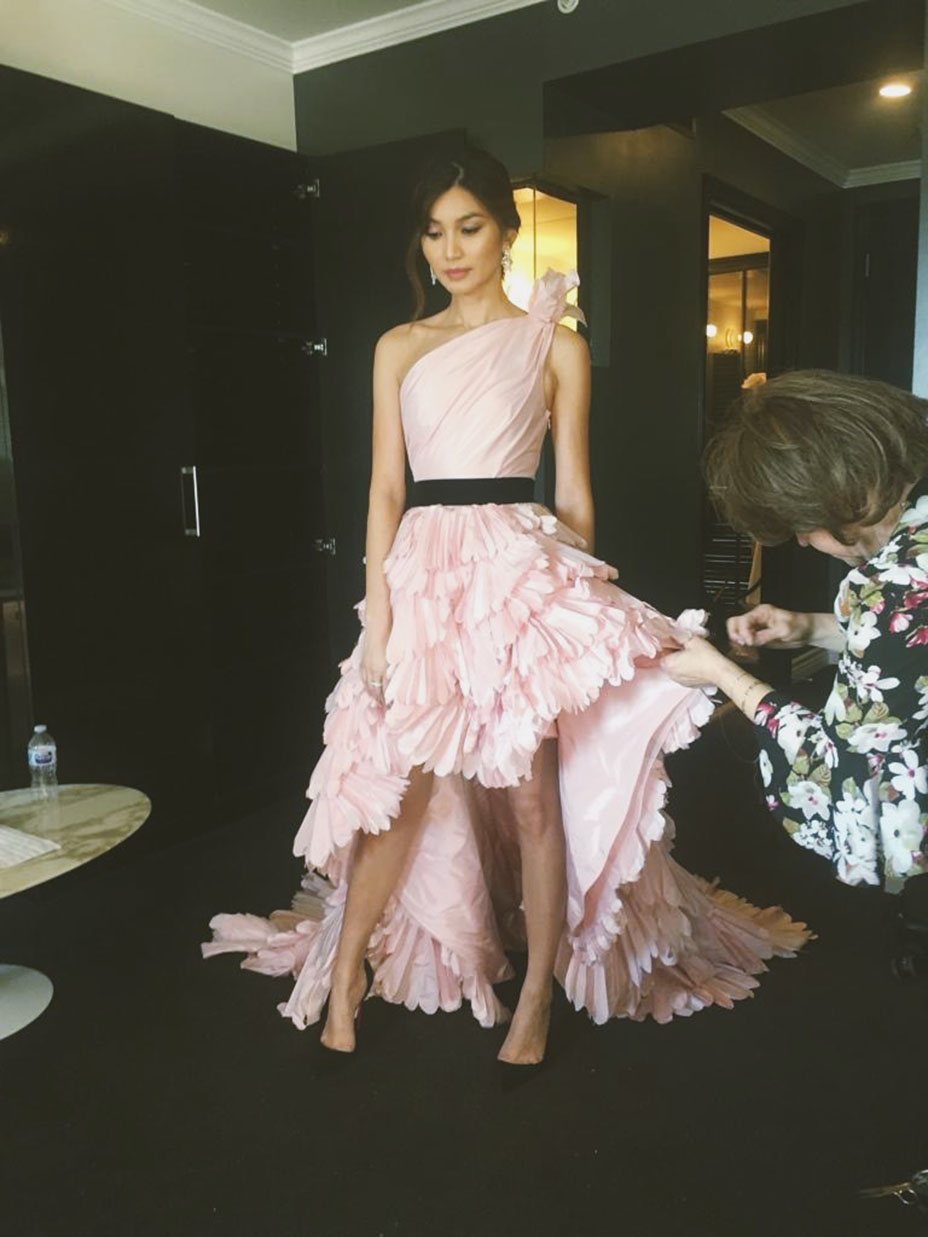 When it came to Chan’s hair, stylist Clariss Rubenstein was on hand to create a modern, youthful, feminine look. “I love chatting with Gemma, Rebecca and Monika before we start the glam process,” says Rubenstein. “We share inspiration and thoughts on the look. We usually have a plan for the day, and I always do a ‘rough draft’ with some hairpins so we can play around a bit before doing the final look. Things can always change the day of, but I still like a little time to get a mental mood board going. 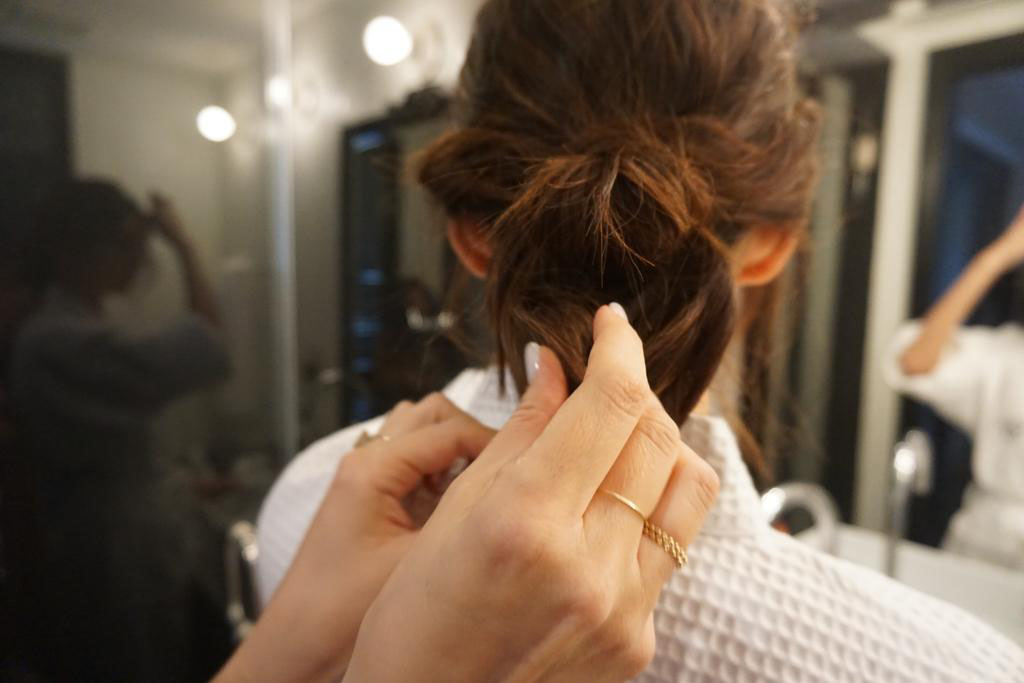 “Gemma is a joy to work with. She has great style and loves the glam process, so the mood in the room is always great,” says Rubenstein. “I love the sweetness of this look. Especially when wearing a dress I love the contrast of hair that is easy and zero fuss. I feel this gives the look a bit of girly coolness. Nothing overdone. Gemma’s hair has naturally great texture; it kind of does what it’s told. I use a combination of irons to create a subtle wave before adding Dove Invisible Dry Shampoo for texture.” 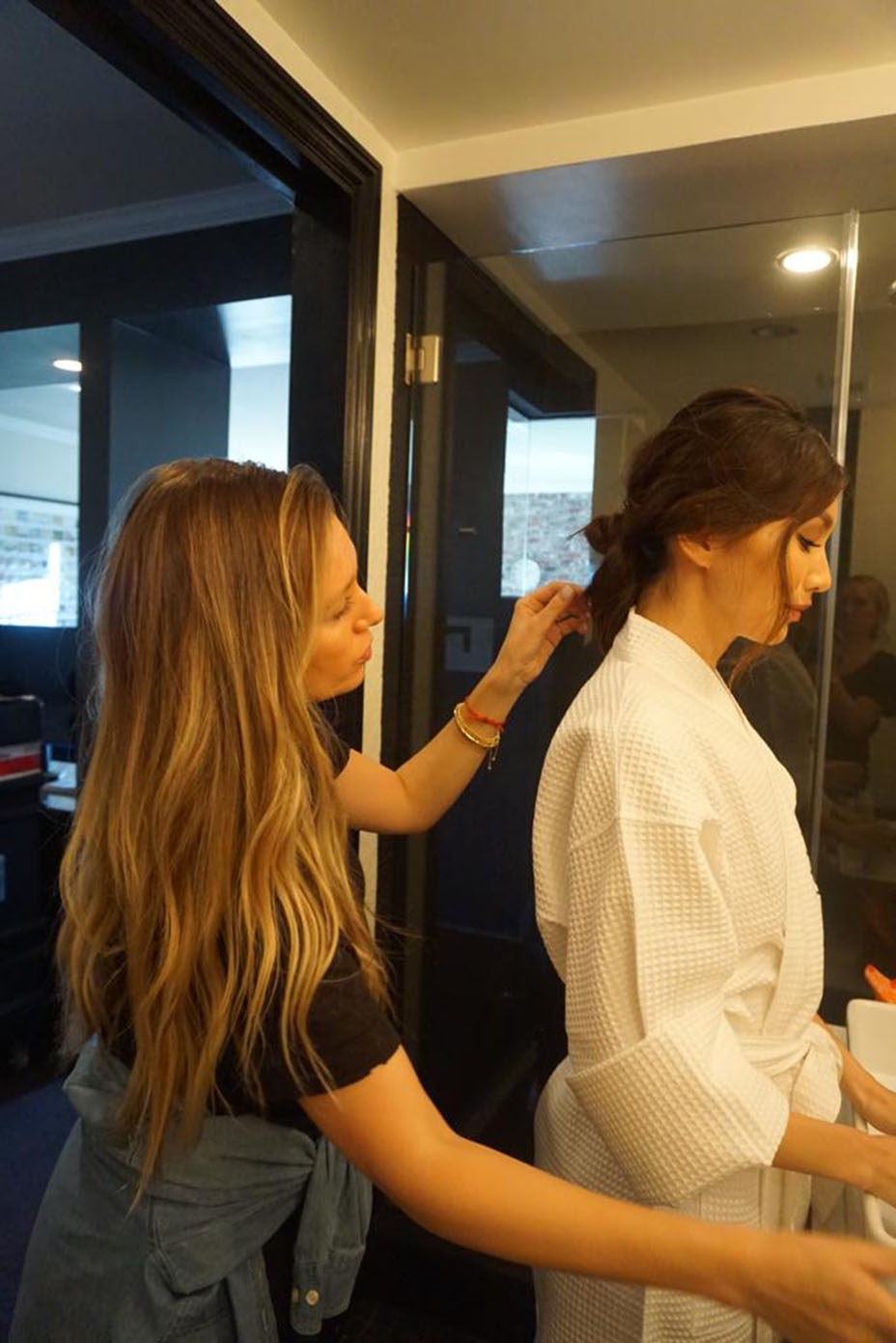 Makeup artist Monika Blunder also took inspiration from Old Hollywood for Chan’s makeup. “Gemma reminds me of a modern Audrey Hepburn,” says Blunder. “She is so timeless and classy and I wanted the makeup to reflect that. I wanted her skin to look velvety with a touch of pink that was soft and didn’t compete with the dress” 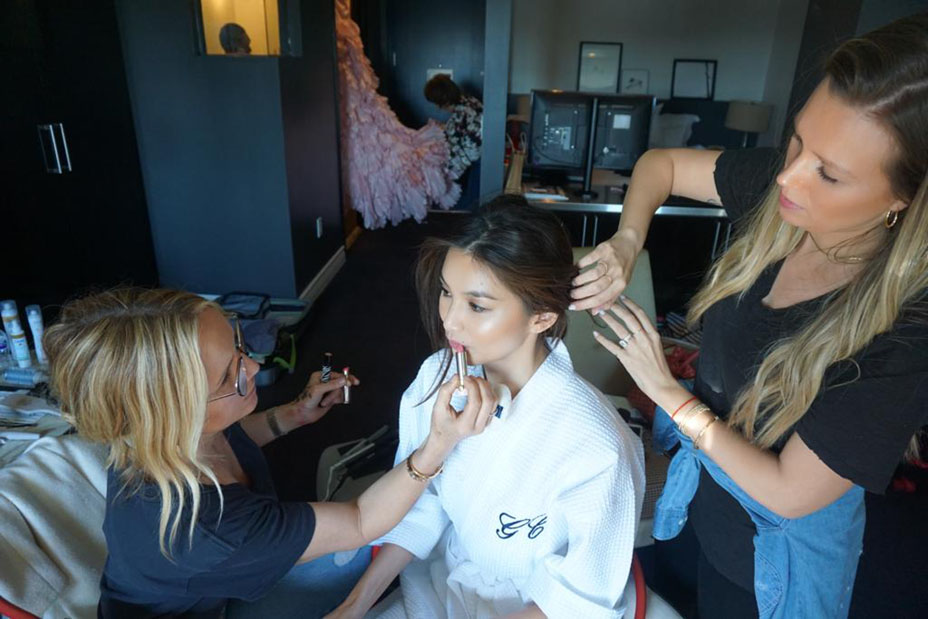 “Gemma used the Youth Revolution collection from Korean skincare brand Amore Pacific to brighten her skin, and I misted the skin with Sulwhasoo Concentrated Ginseng Renewing Water so the skin was moist and dewy,” says Blunder. “To create the makeup look I used Sulwhasoo Perfecting Cushion Intense No. 23 all over to create a flawless finish. For her eye makeup, I wanted to create a soft yet strong eye. To bring in the pink from the dress, I added some of the Sulwhasoo Radiance Blusher No. 1 on the lid and a black liquid liner to create a defined, small wing on outer corner of the eyes. I curled the lashes, and used a glossy, black mascara.” 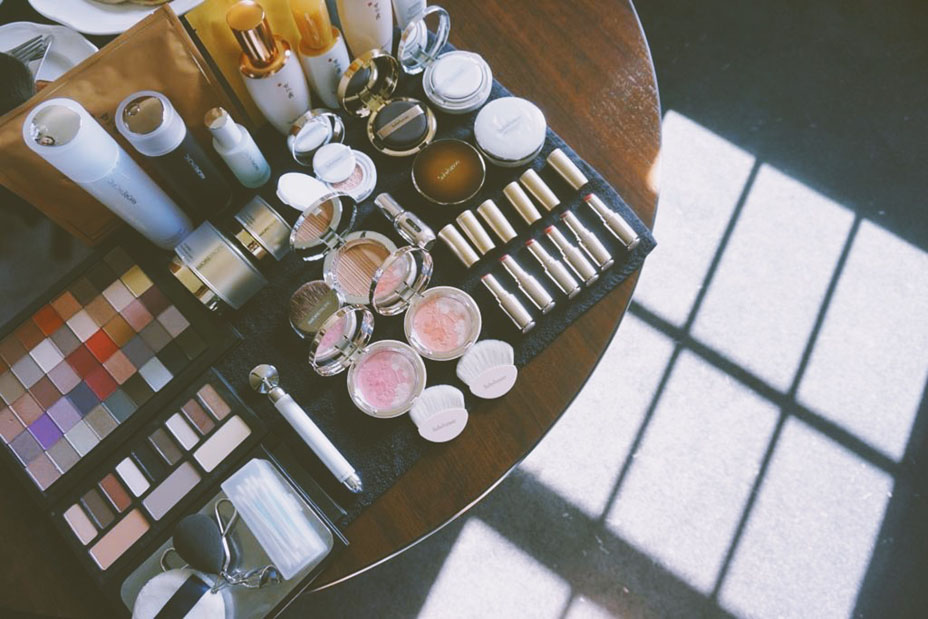 “For the cheeks I used Sulwhasoo Radiance Blusher No. 1 on apples of the cheeks. It was the perfect pink to complement the soft pink of her dress,” adds Blunder.

With the final alterations completed, and her hair done, and a sweep of Sulwhasoo Essential Lip Serum in Sweet Pink, Chan headed out to the Shrine Auditorium. 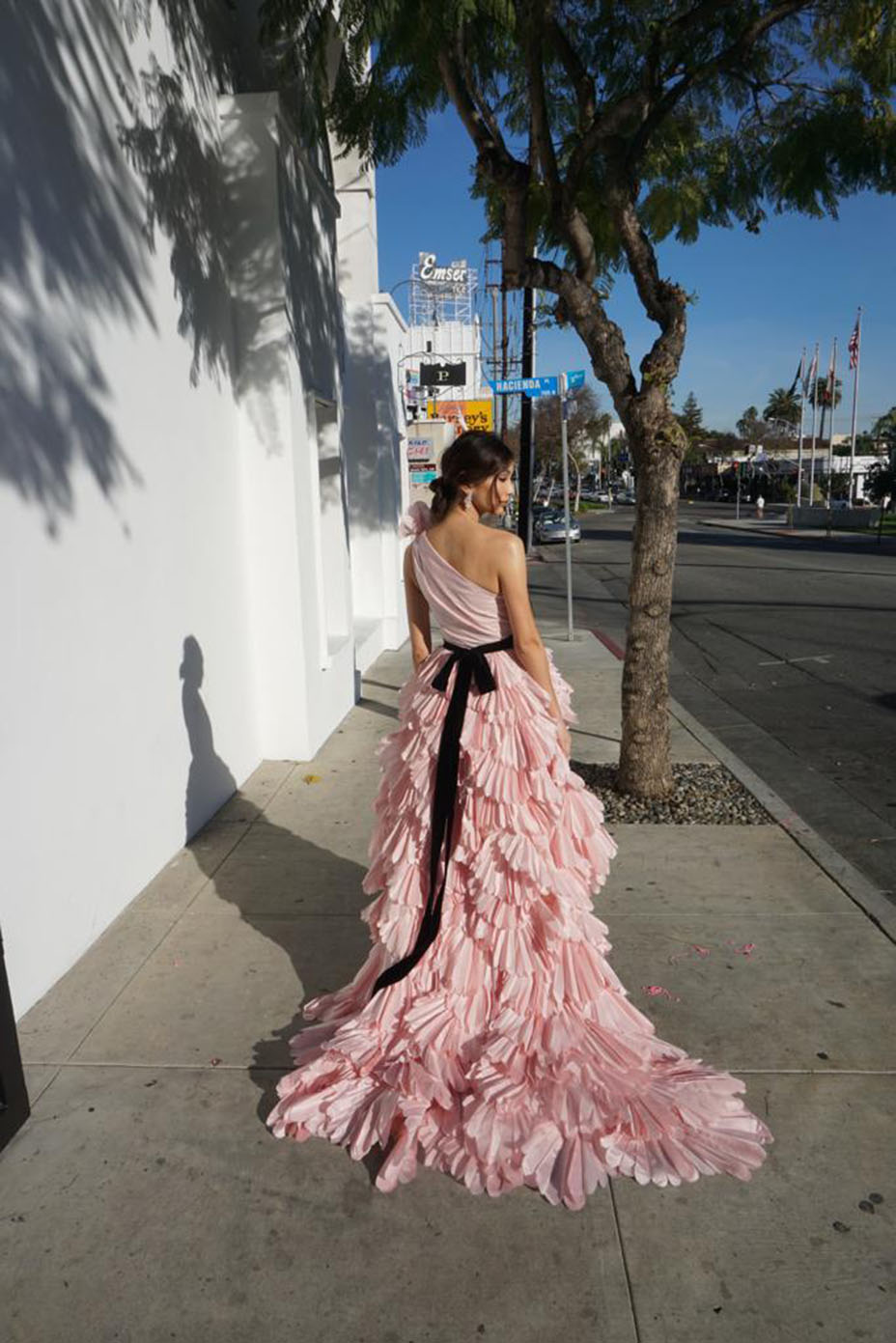