It started with a primal scream and ended with a group hug. Glamour’s Women of the Year Awards, held Monday night in Los Angeles, couldn’t have come at a better time.

The magazine gathered a league of extraordinary females from the realms of Hollywood, finance, fashion, social activism, sports and politics to celebrate their achievements, with Glamour Editor-in-Chief Cindi Leive bringing the awards to Los Angeles for the first time.

The 26th annual awards were live-streamed from NeueHouse Hollywood in the evening, following the magazine’s first WOTY summit during the day.

“These winners are all joined by their deep value of women. That’s their north star…so tonight, I’m with them,” Leive said.

Democratic presidential candidate Hillary Clinton’s failed bid for the presidency was a throughline during the awards show, from the opening remarks, when Tracee Ellis Ross kicked things off by leading the group in a primal scream to mourn the election, to the closing spoken-word tribute to the first female presidential nominee — with Shonda Rhimes, Lena Dunham, Ted Danson, Elizabeth Banks, Mindy Kaling, Joe Jonas, Zendaya, Simone Biles and many more pledging to continue to work on behalf of women while standing underneath a giant screen featuring a drawing of Clinton. 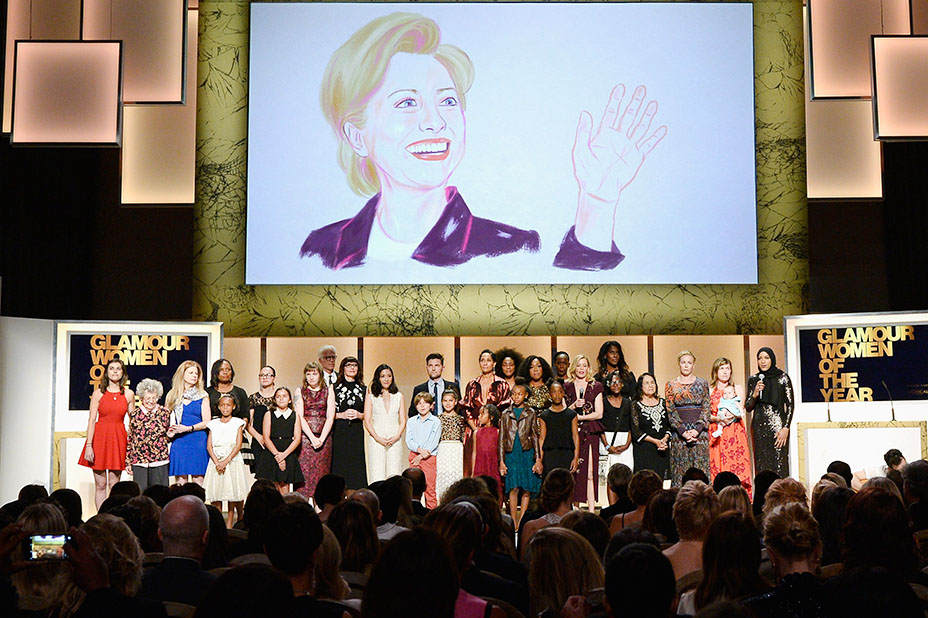 “I’m still working toward accepting a reality that I do not like,” said Ross, dressed in a Fendi “nightie,” as she called it, chosen to make her look as vulnerable as she feels. “I keep hoping I’m going to wake up and realize Shonda Rhimes wrote a super realistic and terrifying episode of Scandal. Are we in Shondaland?”

Shifting the mood, Ross pointed to the next generation of female leaders who won on Election Night, including California Democratic senator-elect Kamala Harris, and the courage and power of the evening’s honorees, including Christine Lagarde, the first female director of the International Monetary Fund; Nadia Murad, who, after being forced to become a sex slave, stood up to her ISIS attackers in the International Criminal Court; and Emily Doe, as the anonymous Stanford University sexual attack victim is known.

“Let’s hope to catch some of their spark,” Ross said.

Rhimes introduced the co-founders of the social activism movement Black Lives Matter, Patrisse Cullors, Alicia Garza and Opal Tometi. “They have fundamentally changed the course of civil rights in this country,” she said.

In the Wake of Clinton Defeat, Pantsuit Nation Mobilizes for More Action

Vogue editor-in-chief and Conde Nast artistic director Anna Wintour praised her friend and honoree fashion designer Miuccia Prada, but she first took a moment to address Hillary Clinton, for whom she’d campaigned so hard. “She brought us so close we could touch the glass above us, even if America couldn’t break it.”

Model Ashley Graham was honored for her work on behalf of size acceptance, and gymnast Simone Biles for her Olympic achievements. Gwen Stefani received the evening’s Icon Award, and pop singer Zendaya was singled out as a new voice for girls.

Bono was named Glamour’s first Man of the Year, honored for his humanitarian work and for establishing his Poverty Is Sexist campaign aimed at helping the world’s poorest women. “He’s a light in the dark, a path leading the way, a super moon, a real man,” Amy Poehler said in her remarks.

Bono spoke for several minutes about “our NC-17 election,” the loss of innocence and how 2016 may be the year he “stopped believing in Martin Luther King Jr.’s words.”

He ended with a warning: “I say to the president-elect, look across to women, make equality a priority. It is the only way forward. The train is leaving the station — be on it or be under it.” 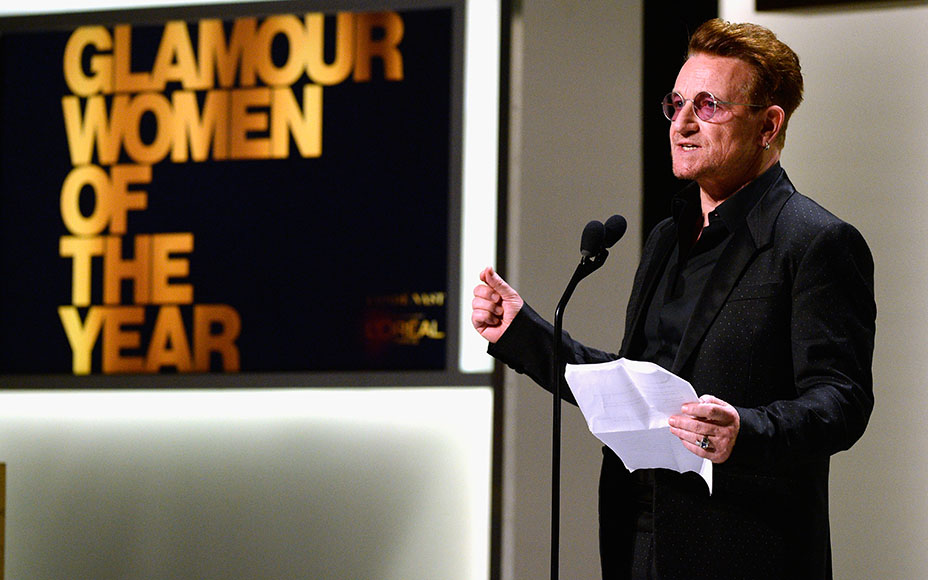