Giorgio Armani has been Glenn Close’s preferred designer for more than 30 years, starting with the first suit she purchased at Barneys (the look still resides in her closet). The legendary designer dressed Close in 1990 for the Kennedy Center Honors, where the actress paid tribute to Katharine Hepburn.

Over the years, a friendship was formed, and tonight Armani and Close will continue that relationship with his design for her to wear at the 93rd annual Academy Awards.

“I think he really understands her layers,” says stylist Chloe Hartstein, who has worked with Close since her 2018 awards-season run for The Wife. “His designs show a strength, but they’re also feminine, and there’s both structure and an ease, and they’re a tad intellectual. He connects very much to her personality in general, and he’s able to transform that into a garment.”

For this year’s Oscar ceremony, those ideas have been translated into a custom two-piece Giorgio Armani Privé look: a vivid blue long-sleeved tunic completely embellished with crystals in a geometric pattern, offset by silver and black beading, paired with cigarette trousers in midnight-blue silk and evening gloves. 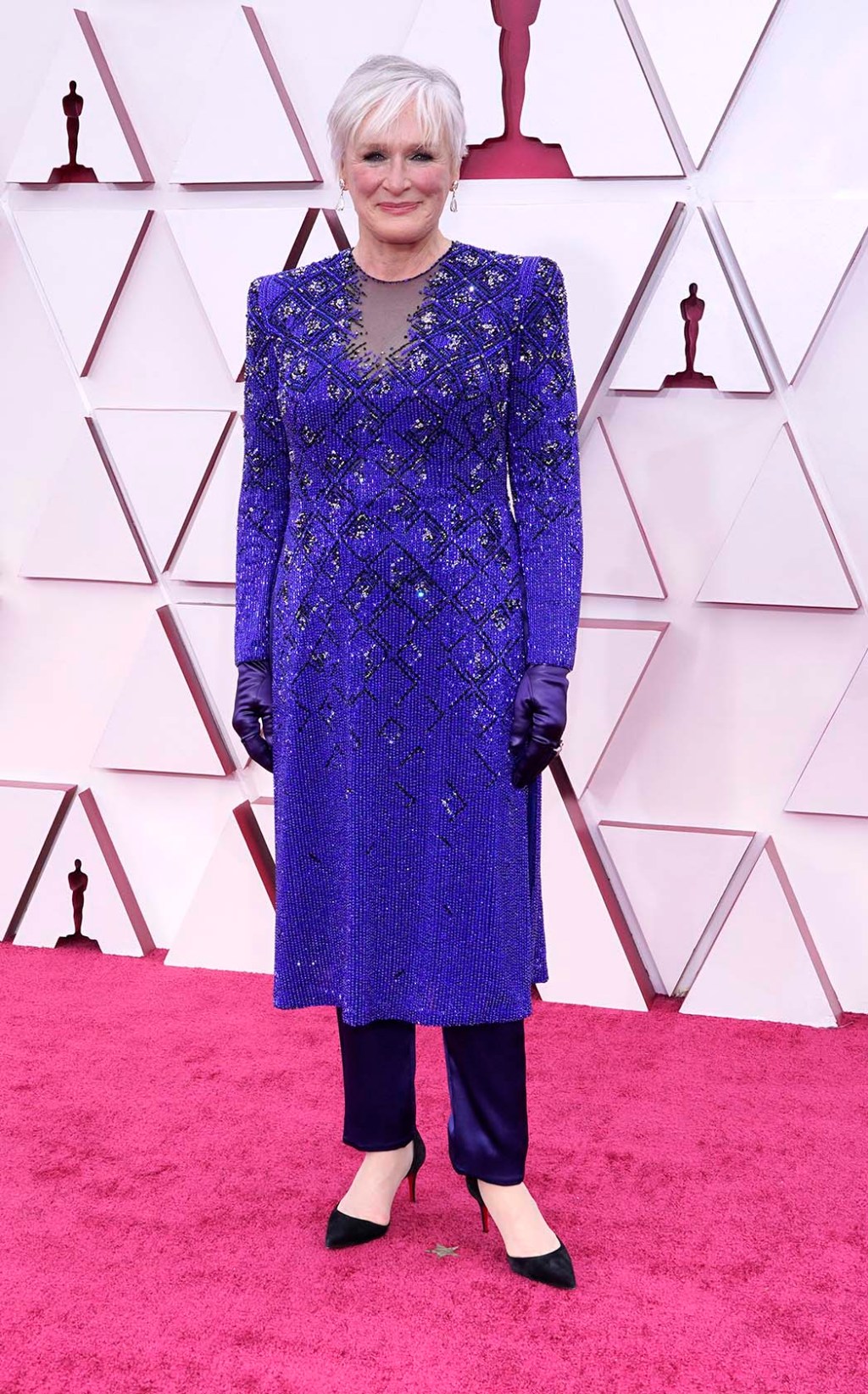 “I’ve known Glenn Close for a long time, and I admire her spontaneous elegance, which I wanted to highlight with a truly evocative outfit,” Armani tells The Hollywood Reporter exclusively. “[The look is] a bit Art Deco in the precious embroidery, with a nod to the Far East in the long tunic and the slit on the trousers.”

On Monday night, April 26, Close, on her Instagram, thanked the designer as well as Wanda McDaniel, the company’s L.A.-based executive vice president of entertainment industry communications worldwide and wrote, “I ADORE the shoulders that hark back to when I first started wearing Armani in the mid-80’s. That shoulder was as empowering then as it was for me last night at the Oscars.”

While Close — nominated for best actress for Hillbilly Elegy, her eighth Oscar nomination — has worn other designers for recent awards shows, including a flowing red Oscar de la Renta gown by Laura Kim and Fernando Garcia for this year’s SAG Awards, Hartstein says there was no question that Armani would be the actress’ choice for the Oscars.

“We went through the catalog of the things they’ve done together, and he just excels in looks that are regal and elegant, yet modern,” Hartstein says. “There’s a timelessness to the things he’s made for her or picked out for her, and she connects with that as well.” 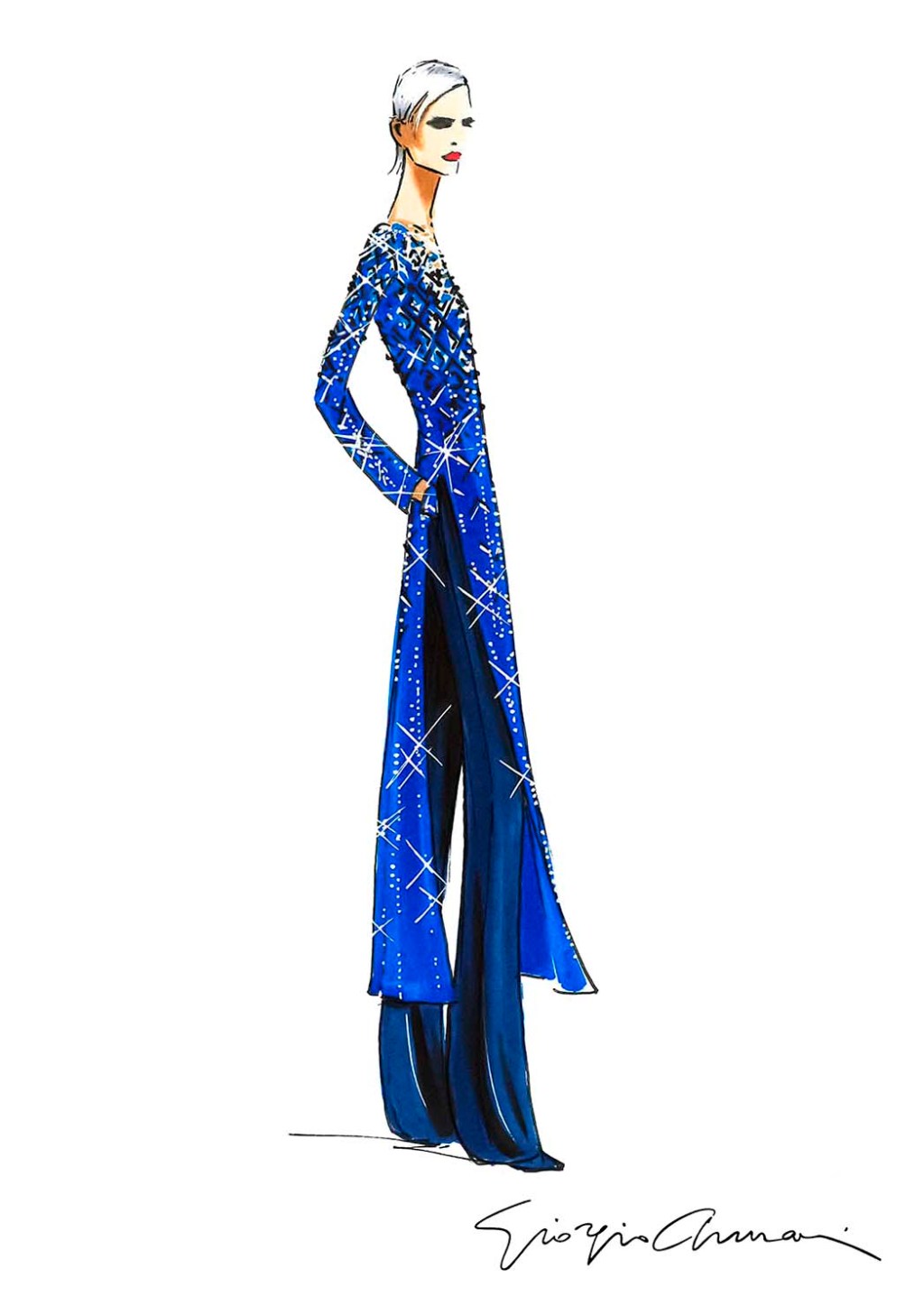 Hartstein and Close were together in person this evening to get ready for the big night. Because of the pandemic, the two have worked together remotely for more than a year, with the actress staying at her Montana home and the stylist hunkering down in New York City. That likewise added a layer to their conversation about this year’s Academy Awards. “Glenn and I spoke a few hours after the nominations came out, and because of everything going on over the past year, and everything that’s still going on, we talked a lot about the idea of wanting to be respectful,” Hartstein says. “But at the same time, when I look at the movie industry, there’s an idea of, wow, we made it through this madness. We’ve held on, and we’ve worked around every possible obstacle over the past year to entertain people when they really needed it. So there was also an element rooted in celebration, of the content that the studios have put out over the past year, and of some incredible performances. We wanted to strike a combination of celebrating the industry and Glenn’s nomination, while also leaning into an idea that we’re addressing where the world is right now.” 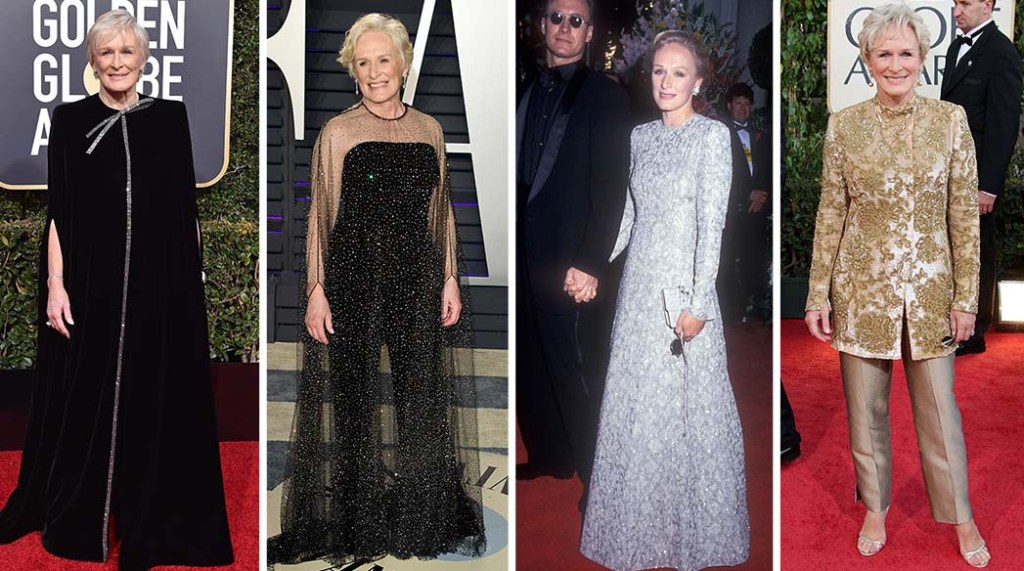 Those thoughts, combined with more than a year of virtual events, informed the finished design. “Restricted red carpets have created more of an openness about awards-season dressing,” Hartstein points out. “Nobody feels like they have to go in a ballgown anymore. Instead, we looked at how Glenn wanted to feel, how she wanted to celebrate her moment, and it was tied together with this legacy that she and Mr. Armani have together.”

The choice of blue, meanwhile, takes its cue from a design in Armani’s Spring 2021 Privé collection, a vibrant hue often referred to as Klein blue for its association with artist Yves Klein. “We really connected with a dress in Mr. Armani’s collection, and we just loved the concept of working with that color and doing it in something that included intricate beading,” Hartstein says. “Plus, Glenn looks incredible in blue, and it really makes her eyes pop.”

Diamond and platinum pendant earrings by Kwiat, featuring a pair of pear-shaped diamonds totaling roughly 11 carats each, complete the look. “Glenn loves jewelry, but she’s also not one to overload herself — it’s all about balance,” Hartstein adds. Ultimately — although the star and her stylist had not been together in the same space since the 2020 SAG Awards — falling back into a work relationship felt effortless, and that likewise played a role in putting together Close’s Oscars look. Before the show, Close shared some getting-ready moments on her Instagram, having CBD cream applied to her feet and wearing a Leset robe.

“We all fell back into the process so easily, and Mr. Armani contributed to that as well,” Harstein says. “We always feel so taken care of by Mr. Armani and his team, so we went into this both feeling at ease and really excited. But just being able to be in a room together for a fitting and catching up on everything felt really special. But there was also a confidence, as though we were both thinking, ‘You know what? We’re good. We’ve got this.’”

Update: Glenn Close’s comments on her Instagram added on April 27, 2021.