Alysia Reiner strode on stage at the Equality Now gala in a white terry cloth bathrobe, standing opposite a man in business casual attire who was visibly shaking, eyes cast toward the floor. It was clear where this sketch was going.

Reiner’s onstage persona riffed on the disgraced reputation of Harvey Weinstein, who has been accused of luring women into his hotel room and then asking them to perform sexual acts in order to gain favor, and thus jobs on his films. The sketch — which preceded speeches by the evening’s honorees as well as gala co-chair Gloria Steinem — illustrated the absurdity of his behavior by reversing gender roles. “You know how many of my executives I hire while I’m showering?” Reiner asks. “All of them.” 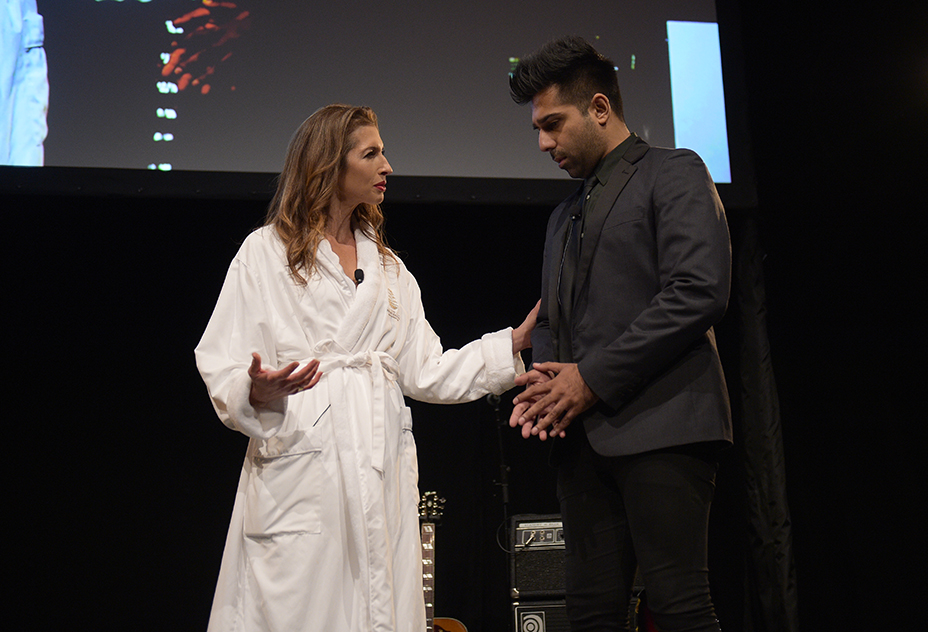 Though Equality Now’s work primarily focuses on changing the law in countries outside the United States in order to protect women from crimes like rape, child marriage and female genital mutilation, the national conversation about workplace harassment seeped into the tone of the evening. A second sketch saw a female tech executive belittling a male engineering candidate for becoming “hysterical” after she scoffed that he wouldn’t be able to commit to his job if he had kids.

Despite these jabs at Weinstein and even, at one point, President Trump and the allegations of harassment against him, the focus remained squarely on the positive work being done globally by Equality Now and its allies. “Girls’ and women’s issues are so important to our stakeholders, both at the Gucci level and the Kering level as well,” said Gucci America CEO and President Susan Chokachi, whose work with the brand’s Chime for Change organization, which has launched 420 female empowerment programs in more than 88 countries, was being honored at the gala. “[Chime for Change] was a culmination of years and years of work that we were already doing to advocate for women and girls; we consolidated them under this campaign in 2013 because we felt it would bring greater attention to the great work that was happening.”

Brisa De Angulo, founder of the Breeze for Hope Foundation, which provides free legal, social and psychological support for victims of sexual abuse, was also honored at the 25th annual event, which was held at Gotham Hall and attracted supporters including AnnaSophia Robb, Jennifer Morrison, Meg Ryan and model Adwoa Aboah.

Alex Rodriguez Texted J.Lo in the Middle of Their First Date

In the wake of the Weinstein scandal, a light has been shone on the fashion industry, and the abuse suffered by models on set; however much of the conversation has been centered around who is responsible for their well-being, be it photographers, agencies, fashion editors or brands. “I think it’s a brand’s responsibility [to protect models], but it’s every single person within a brand,” said Chokachi. “We are all activists, every day. We are all called to the responsibility of protecting our women and our girls in our industry and beyond. It isn’t just one organization that can be responsible.”

Steinem, who presented Chokachi with the honor, noted that the issue of harassment, at least in the U.S., is not one of legislation but of numbers, unfortunately. “Currently, the problem is that it takes more than one case of sexual harassment or racist treatment by the cops for charges to be brought forth and believed,” she told THR.

Haim, the sister act band that closed out the evening with a performance, praised the work of Equality Now, and doled out tadvice for young women aspiring for success in the music industry in a post-Weinstein world. “Follow your gut and stick to it,” said Alana. “Don’t let anyone tell you what you can and cannot do.”

Added Este, “Even in the last month, we had people telling us that we’d never sell out the Greek Theater, and we did it in two hours. So put that in your pipe and smoke it!”

robbed a bank in @gucci