Prior to Sunday night’s Golden Globes, some fashion pundits were wringing their hands over the #WhyWeWearBlack movement: Would the sameness be boring? Would actresses feel like individuals amid a sea of noir gowns? (Funny how that’s never said about men and black tuxedos.)

But critics needn’t have worried. Actresses excelled at participating in the night’s theme, choosing black looks that allowed each person’s unique personality to shine through. And they didn’t shy away from adding a bit of sparkle, with necklaces in a variety of lengths and styles becoming part of that statement.

Turning up early on the red carpet was Allison Williams, who opted for a delicate Forevermark five-row choker featuring 43.15 carats of white diamonds, which paired nicely with the graphic beaded bodice of her Armani Prive gown. At the other end of the necklace yardstick, deep plunging necklines offered the perfect framework for pendants: Kate Hudson, in Valentino haute couture, wore Harry Winston’s Secret Wonder diamond, sapphire and aquamarine pendant totaling 30.01 carats, set in platinum, while Issa Rae opted for a Lorraine Schwartz diamond and emerald necklace, its waterfall-like cascade of white diamonds dancing along the plunging V of her Prabal Gurung black liquid chiffon gown. 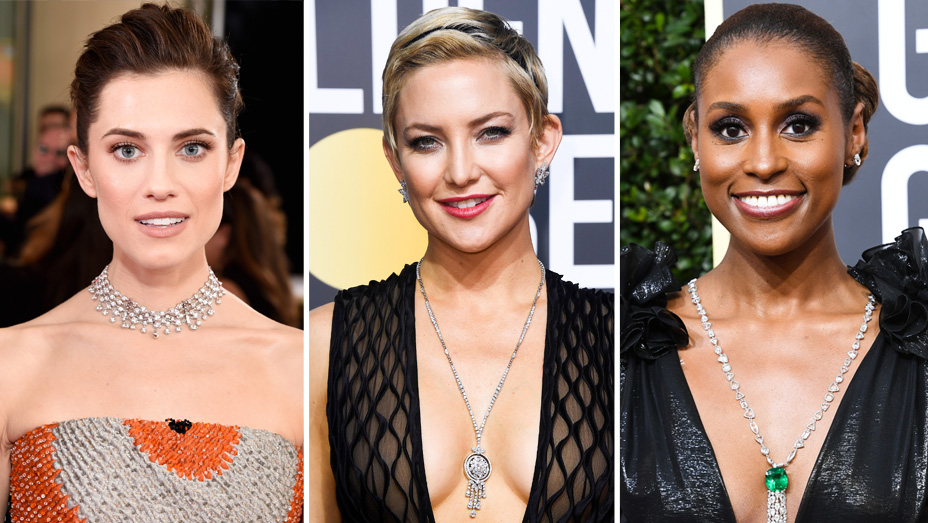 White diamonds indeed seemed to be the rule, which made Greta Gerwig’s necklace the standout exception: Her feather-like gold and diamond necklace is from the Tiffany & Co. archives, a 1980 piece conceived by Angela Cummings, who was one of the house’s most prolific jewelry designers during her 16-year tenure between 1967 and 1983.

And while white diamonds may have dominated the night’s necklace game, the styling for each was decidedly diverse. Alison Brie’s high-jewelry necklace from Bulgari’s “Le Magnifiche” collection may have felt more on the traditional side, with roughly 80 carats of round brilliant-cut diamonds set in 18-karat white gold, but it proved to be the ideal accent for Brie’s skirted jumpsuit by Vassilis Zoulias. 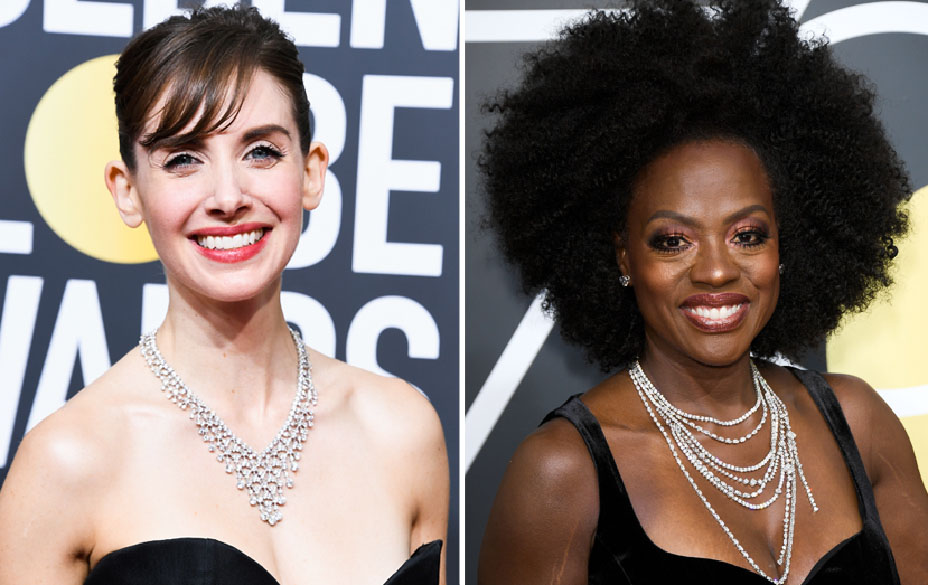 Then there was the wonderful bit of chaos over Viola Davis’ necklace: From Harry Winston, the “Secret Combination” necklace was crafted with 111.48 carats of white diamonds set in platinum and was meant to look like yards of diamonds wrapped casually about the throat, though it was designed precisely to exude that sense of stylish discord. The beautiful cut and simplicity of Davis’ custom black velvet gown by Brandon Maxwell also suited this flurry of a necklace —perhaps the night’s best proof that the theme was never going to be boring.