It was only a matter of time before one of the legion of cooking-competition reality shows would spawn a brick-and-mortar restaurant. And perhaps there is no better showplace than Las Vegas and no better showman than chef Gordon Ramsay to be the first.

Democratic Women Will Wear Black to the State of the Union, Following Hollywood's Golden Globes Protest

Gordon Ramsay Hell’s Kitchen held its grand opening at Caesars Palace over the weekend, and the multi-Michelin starred chef was joined by the finalists of the Fox television show’s 17th season as well as other contestants from the program’s long run, in addition to 400 invited guests. This is Ramsay’s fifth Las Vegas restaurant.

“We’ve managed to replicate what we’ve had onscreen,” Ramsay says. “When I first talked [about this] two years ago, [we asked] ‘Where’s the best location?’ We thought about London, we thought about New York, we thought about L.A., and then while we’re talking to Caesars, they said potentially there’s something coming up on the Strip. This [location is] viewed by 35,000 people driving past it every day, so it’s a dream come true in terms of real estate.” 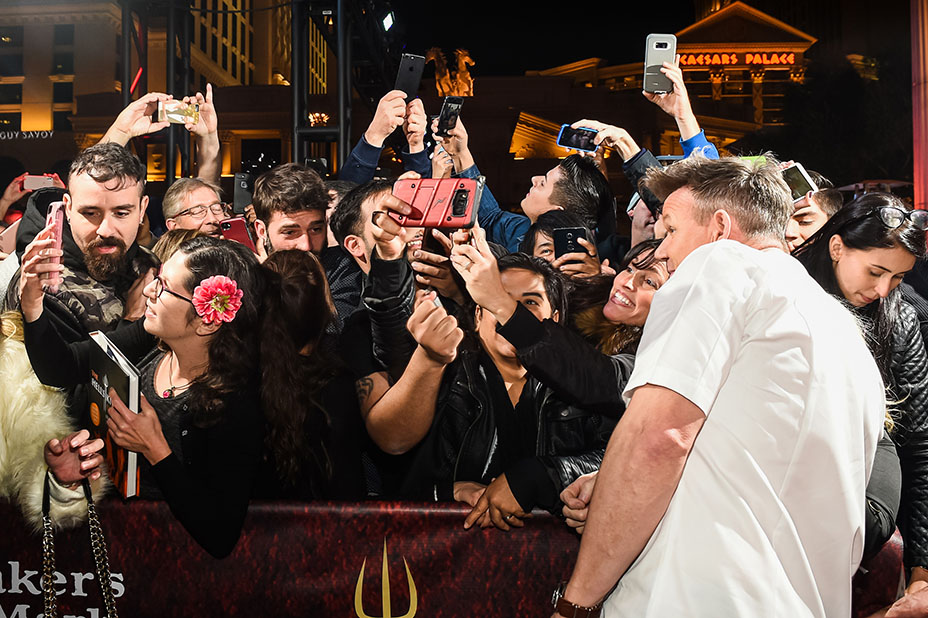 The famously hot-headed chef goes as hard in the kitchen of his new restaurant as he does on MasterChef, MasterChef Junior and Hell’s Kitchen. After more than a decade on television, with his shows being aired in 110 different countries, Ramsay says the Hell’s Kitchen phenomenon — that will ultimately be reflected in HKLV — is based on jeopardy, anxiety and boisterous excitement that is unscripted.

“This year’s winner will hold a position at the helm of running the restaurant,” Ramsay says. “My ambition personally is to start shooting here and maybe holding two or three of the challenges, and then, fingers crossed, next year holding the finale here, which would be a dream.”

The space, designed by Jeffrey Beers International, evokes the set of its namesake with a fiery pitchfork, an open kitchen that sparks the curiosity of diners and teams of cooks decked out in the exact red or blue team uniforms from the show. The HK sign is the original one that Fox had built outside the Hell’s Kitchen studio 10 years ago.

“I’ve been sneaking in and out [of Las Vegas] since December. I am a control freak. The excitement is amazing, 25,000 reservations already booked, and the last reservations goes up until the end of June,” he says. “When I’m in the kitchen, I’m like a sportsman. I want the very best. It’s the Super Bowl for me every time we open up.” 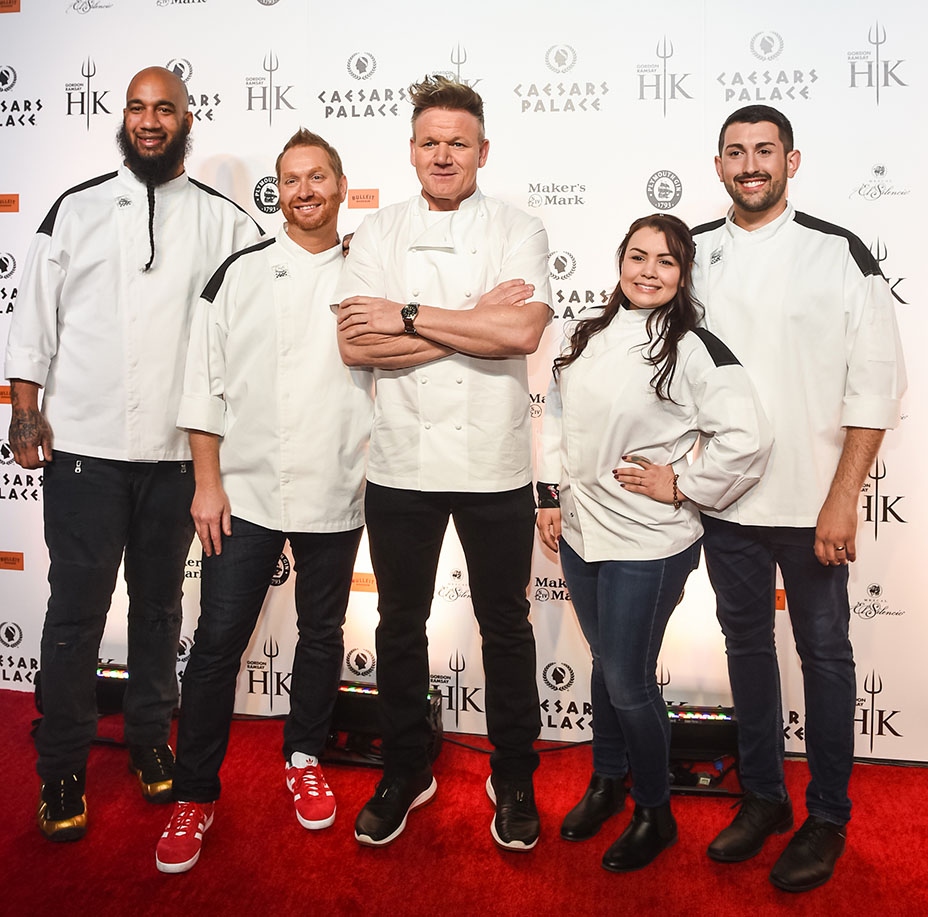 But while guests will feel like they are part of the action, Ramsay has briefed the staff this shouldn’t be a situation of life imitating art.

“[I told them] ‘This is not a show. This is the real deal,’ and the staff is serious, they’re committed, but crossing over from that show element into the real deal of life, running a professional restaurant with those expectations, the pressure is 10 times harder,” he says.

For dinner, Ramsay recommends ordering the gin-based Notes From Gordon cocktail which comes with a humorous, personal letter from the man himself, as well as the poached lobster risotto with butternut squash or the pan-seared scallops with a cauliflower puree.

Next up is a Gordon Ramsay Steak with Caesars in Atlantic City coming this fall, but for now Las Vegas has his heart.

“Professionally, it’s one of the most competitive cities anywhere in the world. It’s harder to make it in Las Vegas than it is in New York, Paris or London, because the competition is rife, and every top chef in the world is here,” he says. “Las Vegas is like a second home — 18 times I was here last year, and I don’t stick my name above the door and expect it to fill up.”

So how has his professional life changed now that he is a celebrity? “I get answers immediately. No one mumbles to me. If I ask a question, I get a straight answer, which is good. I do manage to get reservations at any restaurant I want anywhere in the world,” Ramsay says. “It is a passion, and I want the very best, but when I get the best, I give the best. It has never become a job. I think that’s pretty evident.”

One of Ramsay’s greatest career payoffs has been with the show MasterChef Junior and the confidence he sees it instills in its young contestants.

“When you look at the amount of food that revolves around primetime television now globally, it’s pretty incredible [compared] to what it was 10 years ago,” he says. “The [kids] may not [all] be academically astute to keep up with the demands of school, but give them a plate, an ingredient — there’s a whole 360 on what it’s done, not just to the industry but to the new generation coming through.”