In addition to dressing Lizzo in custom Balmain for both the red carpet and onstage, he also put together the looks worn by Doja Cat and Noah Cyrus, both nominated in the best new artist category, which Lizzo is presenting.

“This is the biggest awards-show moment I’ve done yet,” says the Los Angeles-based Nelson. “What’s even more exciting is how different and individual each of these women are – seeing these three incredible artists together within the same segment is going to be pretty special.”

Among the details Nelson highlights: Doja Cat — also nominated for record of the year and best pop solo performance, both for “Say So” – arrived at the Grammy Awards in a gown by Fausto Puglisi, who made his debut as the creative consultant for Roberto Cavalli in February.

Grammys Add New Categories, Including Songwriter of the Year 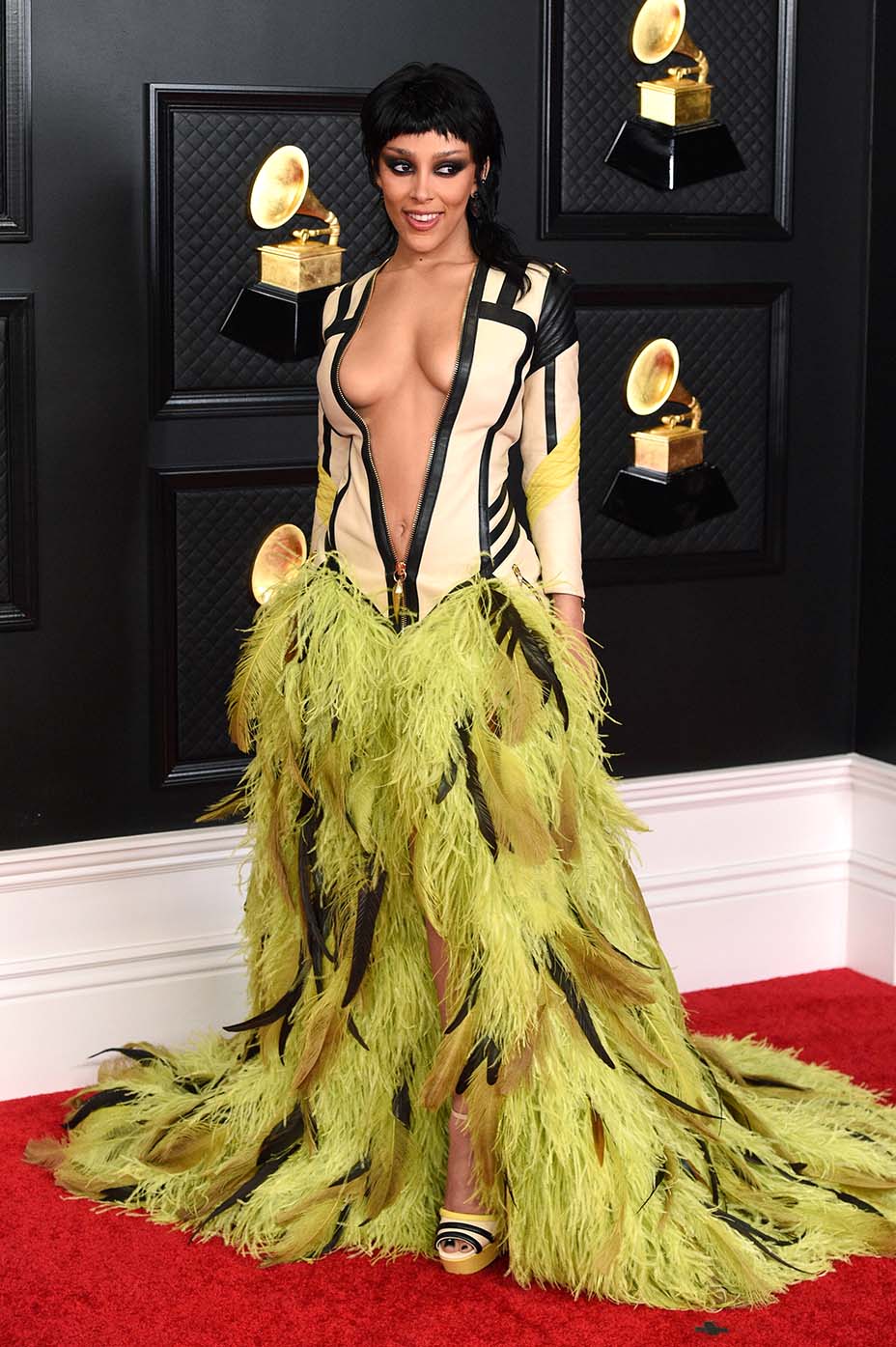 “The top of the dress features styling that feels like a motorcycle jacket, while Fausto did some insane feather work in an electric chartreuse for the bottom of the dress,” Nelson reports. “I try to not follow red-carpet standards when it comes to Doja. This dress feels like classic Cavalli, but also new Cavalli – beyond [the runway show in February], it’s the first real chance for Fausto to show what he’s going to do.” 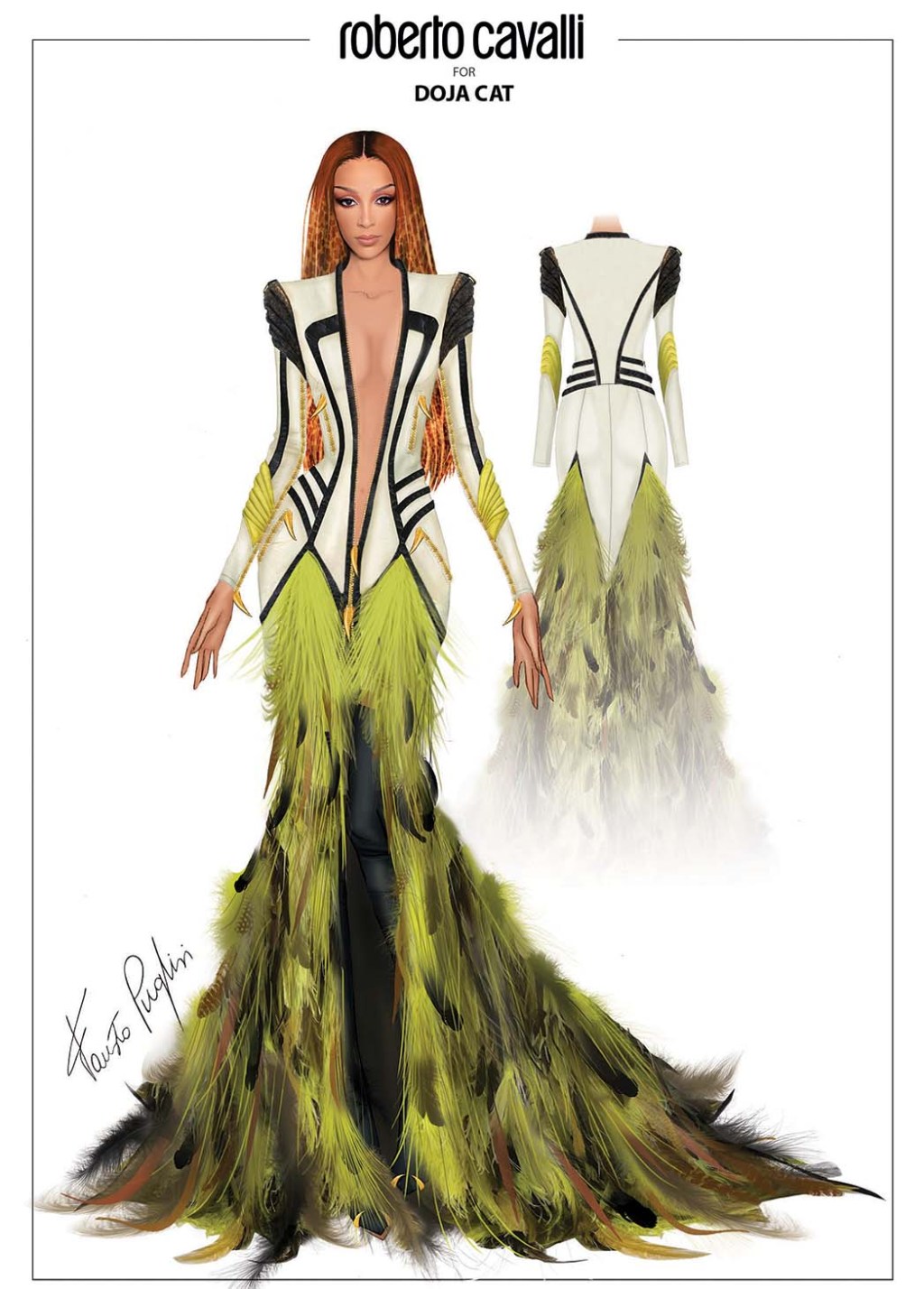 For her onstage performance, Doja Cat will wear a custom Jean Paul Gaultier piece that pays tribute to classic designs by the iconic French designer. “They were very generous in opening up their archives to me,” notes Nelson, who is also Doja Cat’s creative director for her onstage performances. “This is the biggest performance of Doja’s life thus far, and we’ve created a genius piece of clothing to go with it.”

Doja Cat is pairing her looks with black diamonds by Lorraine Schwartz. “She’s created some huge black-diamond rocks as an earpiece, and we’ve mixed in some other black diamonds with it,” Nelson says. “Doja had said she wanted to wear black diamonds, so I needed to go to someone I trusted. Lorraine was my first and only call.”

Cyrus, meanwhile, is wearing Look 25 from Daniel Roseberry’s Spring 2021 haute-couture collection for Schiaparelli. The white floor-length gown with deep-V neck and its matching cape in silk taffeta was the finale look in the label’s January haute-couture show, and Nelson says he was coveting it from the moment he saw it. 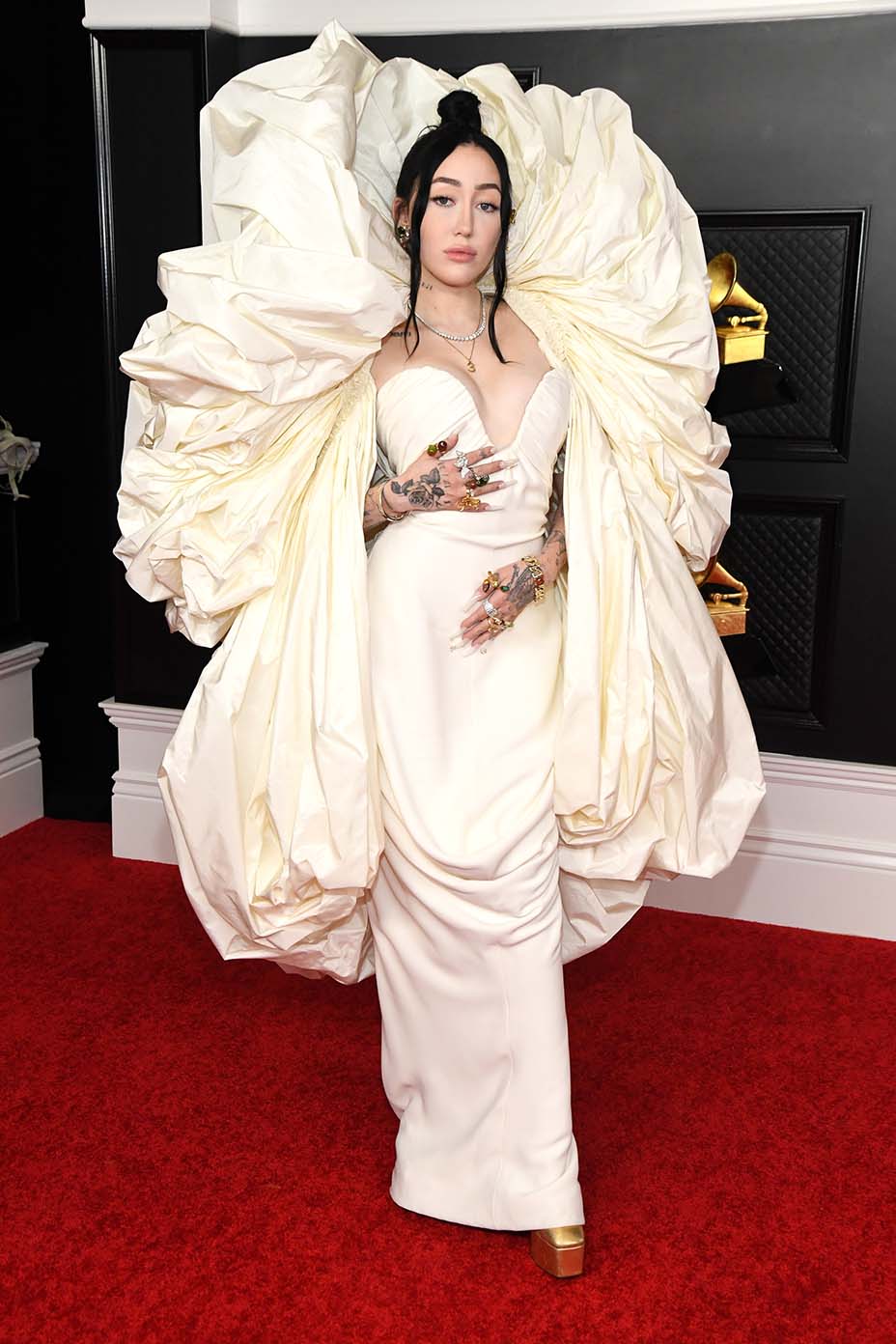 “It feels both angelic and sculptural,” he adds. “Noah is still kind of a new artist, so I wasn’t sure what the response would be from the showroom when I requested it. I pulled other things just in case, but when the yes came back that we could have this, I was so excited. What Daniel is doing is just pure art in fashion.”

As Noah Cyrus just turned 21 years old in January, did Nelson have to impart any education about Schiaparelli, the French fashion house, founded by Elsa Schiaparelli in 1927?

“I definitely gave her some insight about the history of the house,” he says. “I showed her some photos of Gaga wearing Schiaparelli, and that’s when I think she got really excited. From a style perspective, it will be a very big moment for her.”

The dress quickly went viral, and Cyrus indeed fell in love with the look, noting on the pre-show red carpet that she was “obsessed” with the look and felt incredibly honored to be wearing not only a Schiaparelli haute-couture gown, but the finale design from the Parisian house as well. Father Billy Ray Cyrus also weighed in, texting to wife Tish that their youngest daughter “looks like an angel.”

Nelson finished Cyrus’s look with a mix of pieces by West Hollywood jewelry Roseark, Jason of Beverly Hills and Italian designer Marco Panconesi, who created statement jewels for Givenchy and Balenciaga before launching his eponymous label. Says Nelson of the latter, “I’ve been stalking his social media, because he creates just really cool pieces.”