November is shaping up to be Gucci month in Hollywood.

The luxury fashion house announced today that it will mount the “Gucci Love Parade” runway show on Nov. 2 in the heart of Tinseltown in front of the iconic TCL Chinese Theatre on Hollywood Boulevard. As part of the event, Gucci has committed $1 million in grants to local organizations at a crucial point in the city’s history.

“Gucci is proud to highlight the intersection of creativity and culture within the City of Los Angeles, poised for rebirth post-pandemic. As part of Gucci’s Changemakers program, powered by Gucci Equilibrium, it will provide significant support to the Los Angeles and Hollywood communities through a donation to the city’s most critical needs: homelessness and mental health,” per a statement released by Gucci and published by WWD, the first outlet to report the news.

The orgs set to receive funds include YMCA Hollywood, Sole Folks, Los Angeles College Promise, My Friend’s Place, the Los Angeles LGBT Center and the Happy Hippie Foundation, the latter of which was founded by Miley Cyrus.

Four days after “Gucci Love Parade,” the house — led by creative director Alessandro Michele since 2015 — will take its act to mid city for the milestone 10th anniversary LACMA Art+Film Gala. Gucci returns as the founding and presenting sponsor for the event at which it also dresses a number of the boldfaced names in attendance, including friends and collaborators of the brand like Dakota Johnson and Jared Leto. This year’s event, co-chaired by Leonardo DiCaprio and Eva Chow, will honor Steven Spielberg and prominent artists Amy Sherald and Kehinde Wiley.

Later this month, MGM will release Ridley Scott’s anticipated House of Gucci on Nov. 24 starring Lady Gaga, Adam Driver, Al Pacino, Jeremy Irons and Leto. The film is not directly affiliated with the house but still tied to its legacy nonetheless as it tells the real-life Gucci family with a focus on the murder of Maurizio Gucci (Driver).

All of the aforementioned disciplines — fashion, art, film and philanthropy — are core activities in Gucci’s universe and Michele has long been open about his affinity for Hollywood and passion for cinema. He personally recruited auteur Gus Van Sant as his co-director on Ouverture of Something That Never Ended, a seven-episode series that debuted last year to kick off November’s GucciFest, a digital fashion and film festival that showcased Michele’s new collection. It starred a bevy of models and notable names including Billie Eilish, Florence Welch and Harry Styles, the latter of whom has emerged as a face of the brand as he’s risen to solo pop superstar status and as in-demand movie star with a slate of films due out next year.

It is expected that some of the A-list names most closely tied to Gucci will appear at the Nov. 2 show, making it even more of a can’t-miss event for Los Angeles, a city Michele has turned to in the past for major launches including a 2018 Gucci Guilty bash at the Hollywood Forever cemetery. 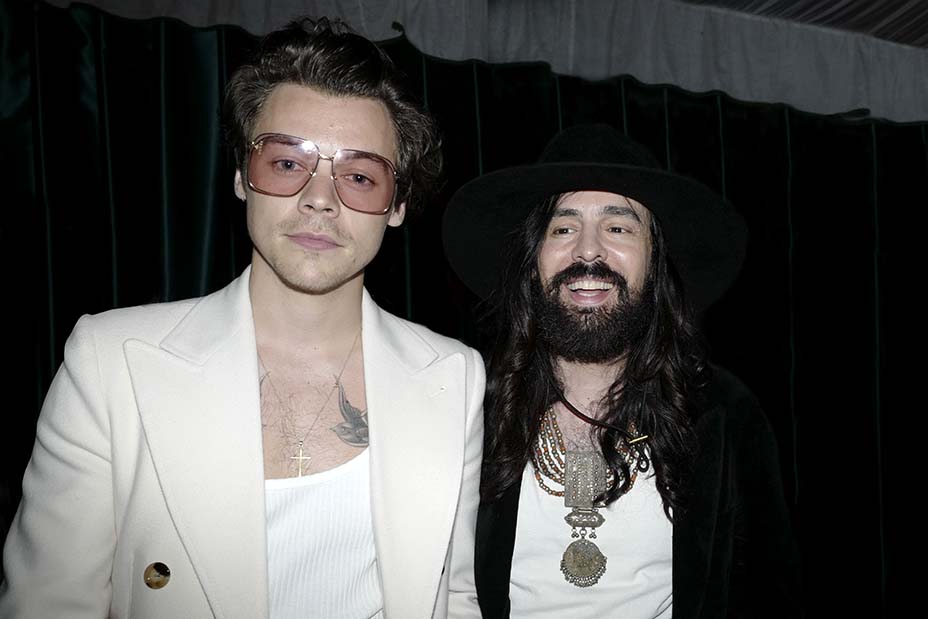