Stefani will return to her “Just A Girl” show’s Las Vegas residency at Planet Hollywood next month for an extended stay through November. On an unusually cold, gray L.A. day, Stefani spoke exclusively with The Hollywood Reporter about her new spring eyewear collections (produced by Tura Inc.) and more.

I’m good. Just sitting in L.A., freezing in my house. It’s so cold in this office! So here we are again, talking about glasses. Another collection, another season. It doesn’t really get old. I literally went to the eye doctor this week, so I’m desperately waiting to get my new prescription; unfortunately, I had to up my dose!

We can relate; there’s also that moment of getting readers for the first time.

Isn’t that awful? Before I needed glasses, I wanted them. And then when I had to wear them, I felt weirdly embarrassed. And that’s a really good reason to be designing them–to try to get something that you feel good in, that expresses who you are. It’s such a fun category because I can design for me, but I can also design things that I wouldn’t necessarily wear. It’s not like shoes. It’s very personal to your face.

The Juniors line is for people with smaller faces, like my sister-in-law. But it’s inspired by my children, for sure, because [my son] Zuma had to wear glasses from very young.  And he’s gonna be known for that his whole life because it’s every photo he’ll look back on. So we have a lot of fun with it and I’m thinking about him all the time when I design.

I feel like I learned a lot over the last year about simplifying what I do in eyewear. At first, I was trying to go so bold. I still do some of that because certain people just want to have that moment. But I think, with eyewear, less is more. You need to create shapes that can work for so many different faces. But I’m really good at knowing what I don’t like! 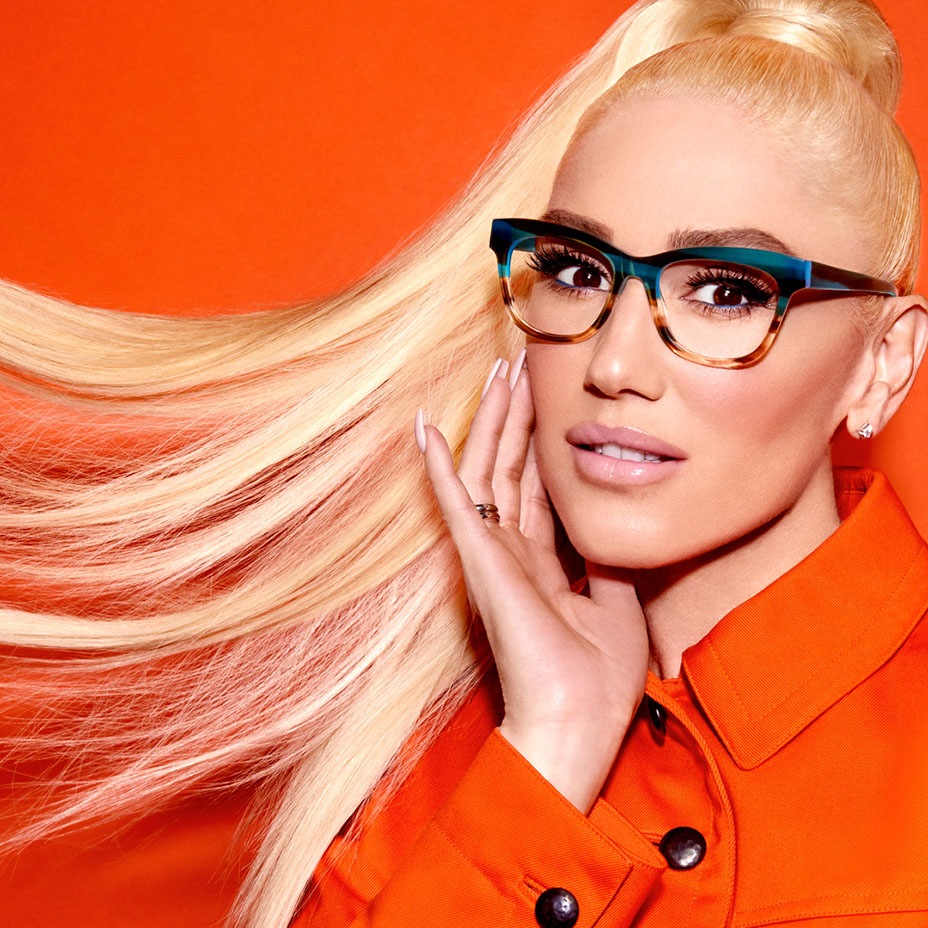 Well, you’ve had 15 years of experience.

Back in the day, coming from the time period that I started doing music, everything was very authentic. We didn’t do music to make money. We were doing it because it was our passion. We had back-up plans. We were doing it because that’s what we liked to do on a Thursday or Sunday when we had our five bucks and could go rent a microphone. So to dabble in designing was scary for me in the beginning! Because I really didn’t want people to think that I was doing it to take advantage of the success I’d had, you know?

My whole life, I’ve designed and made clothes. I’ve always loved the process of being creative—whether it be writing a song or designing eyewear, a handbag or shoes. It’s all coming from the same place inside me, which is the creative dream. And a lot of times it’s really a dream more than it is the outcome of it. Right now, when I see the glasses in front of me, I’m pretty much over it. And that’s why I really like doing it. I love forcing everyone around me to say, ‘This is a really good idea! Let’s go, let’s make it, let’s see!’ I love the samples. I love to get it back. It’s the process I love!

So to be able to do that and have people accept it — when I first did the Le Sportsac bags, I couldn’t even walk down the street in New York without seeing five of my bags, and that was an amazing feeling. It doesn’t matter if it’s music or if it’s something else. It’s about bringing joy to people through whatever creativity that I can.

You first broke into pink and blue hair, and now everybody’s doing it…

Isn’t it weird how that kind of color in hair has become almost a normal, everyday accepted thing — even wigs and things that we would never want to talk about are just normal now! You don’t even put music out now unless you’re going to try to put makeup out! You basically put music out to put makeup out. It’s a different time.

And people have glasses wardrobes now.

They’re bigger than ever! Don’t you feel like people wear them and they don’t even need to wear them? Because they just look cool.

What’s new in this collection?

We did a lot of geometric patterns, which I love. But I think my favorites in every collection are always going to be the tortoiseshells. When I first started wearing glasses, I really loved those kind of sexy secretary-nerd bold, thick glasses. But as time has gone by, everything has gotten a little more feminine, a little smaller and less aggressive.

Before, I was always pushing people to go too far. But now I feel like it’s the opposite. They always come back with these crazy ideas. And I’ll be like, “Even I won’t wear that! You know? Stop! It’s too much. They’re glasses!” So it’s finding that balance where it looks like: “Whoa, where did you get those? Those are not normal but they’re not distracting and kooky.”

My favorite sunnies are the circular glasses (their number is LA 550), which I know not a lot of people love. I did them in a turquoise print that I’ve literally been wearing for a year. Probably my eyewear people are like, “Get rid of them!” I just love them, they go with everything. So I forced them to do them in a floral print this season and I’ve been wearing those non-stop. 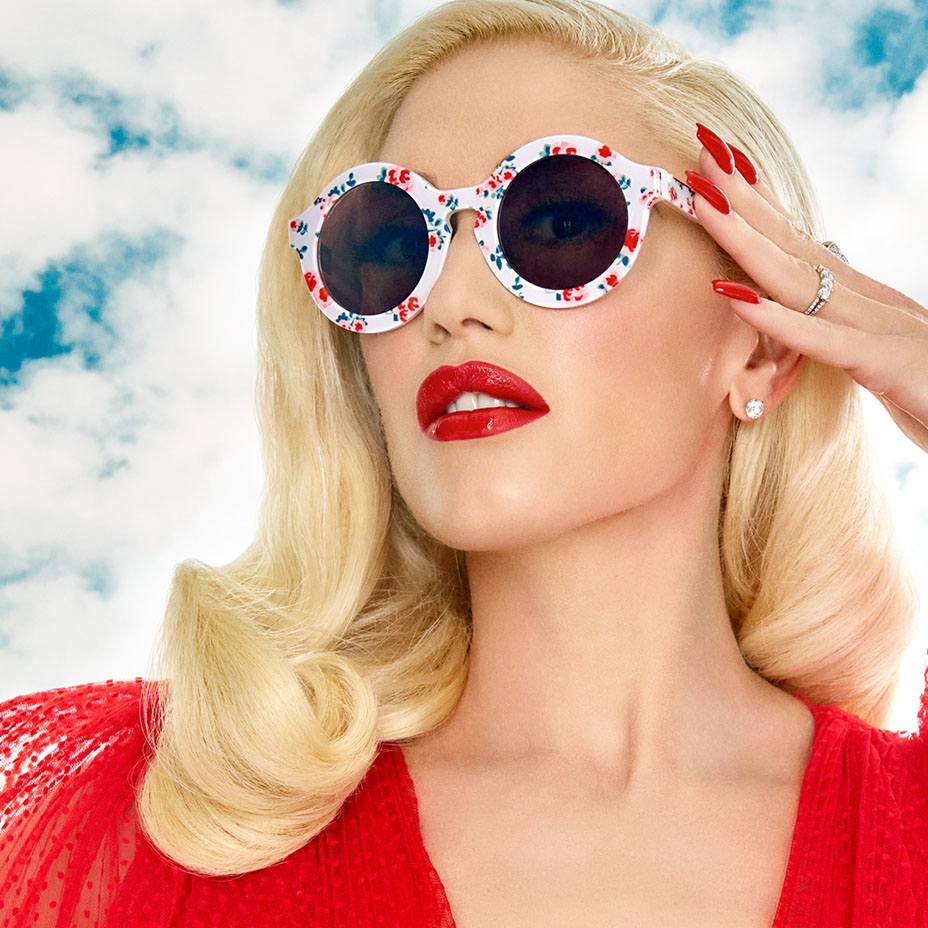 What makes your eyewear stand out?

It’s all about trying to get materials that look and feel really expensive. Vendors come with suitcases of samples. There are so many versions of tortoiseshell or whatever; it’s endless! Sometimes you think of what seems like a really good idea, but it actually looks cheap when it comes out. So it’s all about trying to find the right combinations to make it look luxe, almost like a piece of jewelry. You want it to feel glamorous and expensive and cool and edgy!

One thing that makes both lines so awesome is that they are affordable. Glasses have to go through a lot; they are thrown around, stepped on, lost, broken. They’re always lost in my house! And I’m so blessed because I have so many. But you still have to get the prescription — and that costs a lot! So just to be able to have something that feels like quality, that’s not just gonna fall apart. … Okay, I feel like I’m like an infomercial now!

Do you look at vintage glasses for inspiration?

You know when you go into a closet and you have one of those center island things? I had one whole side of my center island filled just with glasses (mostly sunglasses) that I’d been collecting for years. So we started with those. But then it evolved into what inspired us. Looking at what great designers are doing. A lot of what I’m doing right now feels like it’s copying myself, as far as reworking or simplifying shapes or taking off grommets or thickening the side. It’s tweaking, rather than huge makeovers every time. We add a few new shapes to keep up with whatever’s happening out there and then redesign whatever is working.

And then there will be something that I used to love so much and I put it on and think, “Gosh, that’s so weird compared to what I like now!” It’s always evolving.