This season, the clothes were all about attitude, fusing rebel-rousing punk elements with sparkly details you’d likely find at a 21st century Pride Parade. Or Women’s March. Or any other kind of protest (there are so many!) of the sort that have been happening round the country lately, for that matter. 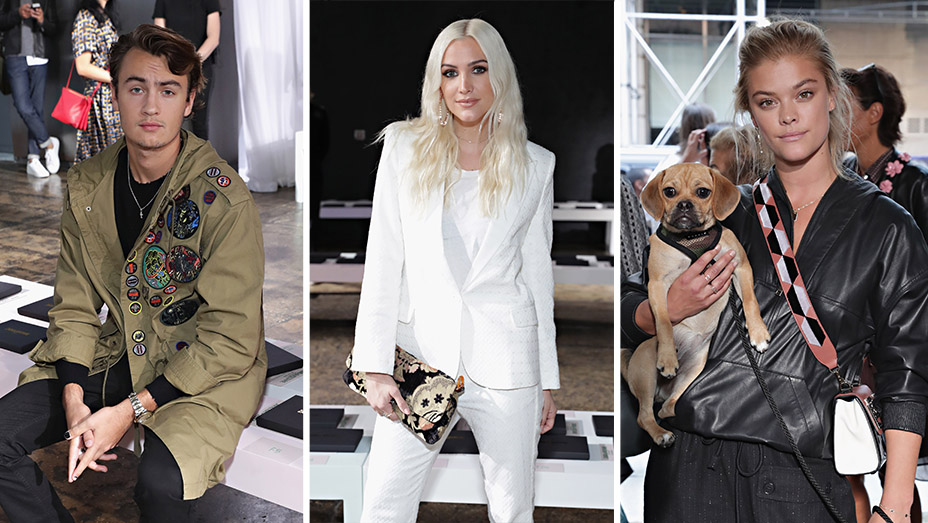 Accessories included ribbon-like chokers in red, white and blue (an homage to the 16th anniversary of September 11th attacks?) reading “Love Love Love,” layered both on the neck and around ankles, as well as leather-studded belts double wrapped around the waist. Protest-ready must-haves like fanny packs — styled the cool-kid way, which is not anywhere near the fanny, but worn crossbody style — and sparkle-covered sneakers also hit the catwalk, where another cool teen model, Brandon Thomas Lee, was seated front row next an adorable puppy and its owner, Nina Agdal.

The most obvious nod to a rebellious spirit came by way of camouflage prints in a range of typically feminine textures like sequins and cotton eyelet, which according to show notes, was an intentional contrast of girly and masculine vibes for looks that “remain feminine while embracing their power.”

Other feminine details included oversize, brightly colored loose-knit sweaters that were slashed and destroyed — Baldwin even threaded her arm through a massive hole, leaving the barely hanging on sleeve swinging by her side. A punch of color by way of itty bitty magenta and emerald green floral prints were an ode to the Flower Power generation of the ‘70s, and the spirit of 2002 Paris Hilton was evoked in cargo pants paired with a racerback tank. Ashlee Simpson, another front-row guest, may have had a few flashbacks at the sight of that look.

A camo sequin halter dress as a necklace over camo cargo pants and a white racerback tank at @zadigetvoltaire #NYFW pic.twitter.com/oHJ6wQkR1g

Like Public School, there was a hint of fashion over function, with bralettes worn over the outside of a pantsuit, and a sequin halter modeled by Culpo top left hanging around the neck. Perhaps the next big statement trend? All the cool kids are doing it.