[The following story contains spoilers for “Under His Eye,” the seventh episode of the third season of Hulu’s The Handmaid’s Tale.]

The Handmaid’s Tale costume designer Natalie Bronfman talked to The Hollywood Reporter in advance of the release of season three’s seventh episode (“Under His Eye”) on Wednesday, July 3. Bruce Miller’s Emmy-winning Hulu series, an adaptation of Margaret Atwood’s 1985 novel of the same name, takes the female characters to bold new places this season as they fight the totalitarian regime in Gilead; their suppression and moments of freedom are reflected in what they wear, which amounted to nearly 1,500 costumes.

Bronfman, who officially took the reins this season after working from the beginning of season one under costume designer Ane Crabtree, noted that this week’s episode (set in Gilead’s capital city of Washington) is particularly pivotal in terms of what the costuming expresses. The setting draws a sharp juxtaposition between the freedom of the high-society commander wives at the Commanders Ball and the constraints of the handmaids, the working Marthas and the econowomen (wives of lower-ranking officials).

“The gala represents the same thing [that happens] when every conqueror removes all luxurious items and hoards it for themselves,” Bronfman told THR. “An example would be great artwork that was stolen during any wartime and kept for only a certain echelon of society. In Gilead, we see this at the gala in all the lush fabric, feathers, beads and frippery that are purely decorative and not functional, that (from before Gilead’s existence) have been hoarded and used on these commanders’ wives dresses for these secretive occasions.” 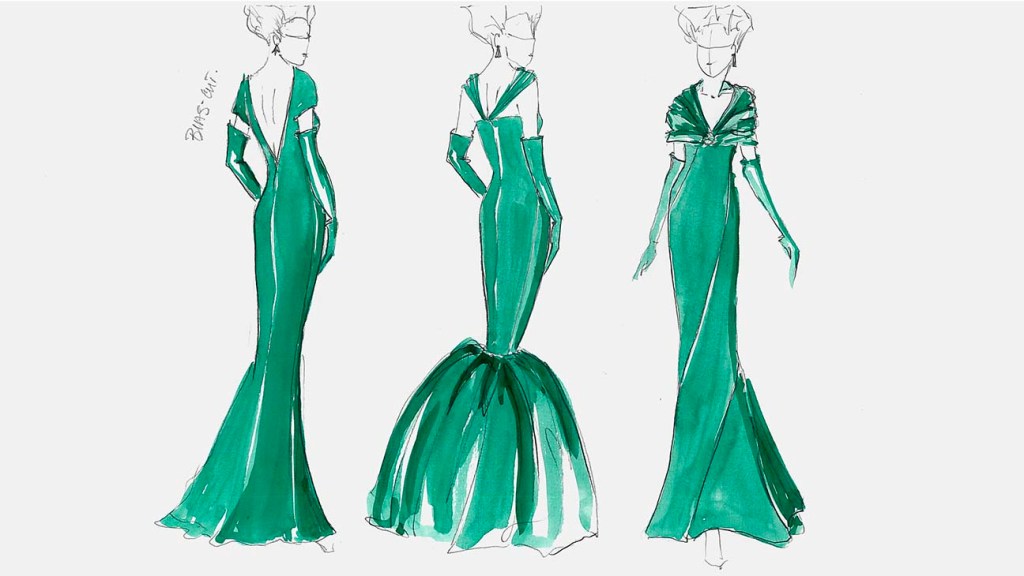 “The dichotomy of the plainly dressed women in Washington is a stark contrast to what we see here at the Commanders Ball. The sumptuary laws in Gilead forbade any embellishment, except behind closed doors [so this highlights] the one percentile of privileged society,” she continued. “I would describe it almost as a fascist New Year’s Eve party. It’s something you’d never seen in day-to-day life. But then the doors close on this upper crust of Washington, which to the rest of the world is so austere and severe, and now they drink and smoke and dance and play music and wear clothing they would never wear in public.”

The over-the-top luxury is further demonstrated through decorative fascinator headpieces and over 50 custom ballgowns (all handmade) for the Washington gala crafted from taffeta, silk, wool crepe, matte satin and crepe-back satin. All the fabrics were additional hand-dyed by the costume team, while the wools were  hand-dyed at Parker Brothers Textile Mills in Toronto, where the series was shot.

In the midst of the ball, one commander says, “Every man needs a safe space to strut for his own peacocks.” Another misogynistically responds, “That’s why we have our own peacocks to strut for us!” Cut to Serena Waterford (Yvonne Strahovski) in a flowy gown with a boat neckline, wearing elbow gloves, as she dances intimately with her husband, Commander Fred Waterford (Joseph Fiennes). 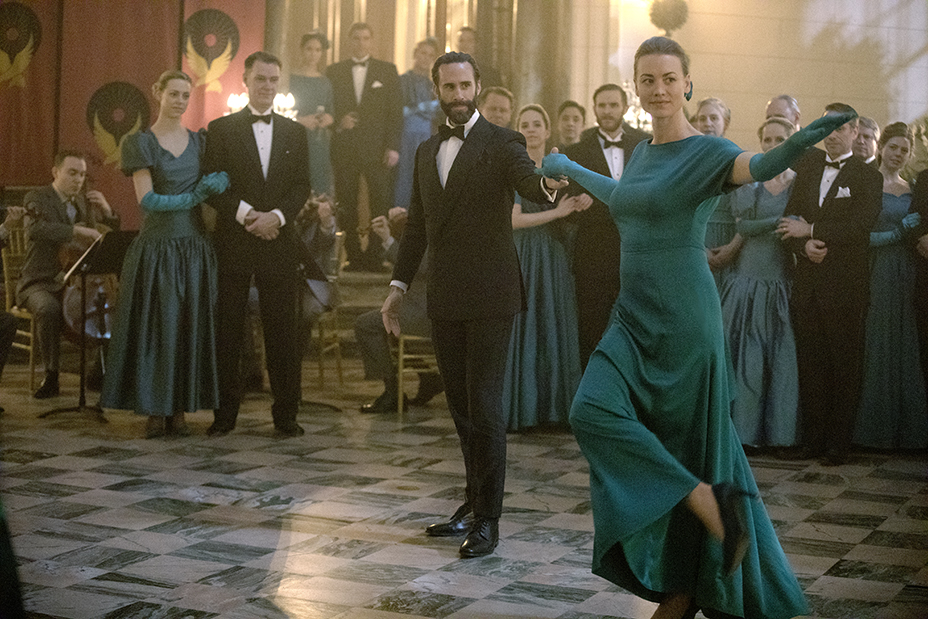 “Normally we never had shine anywhere in Gilead ever, but at the gala, everything has a sheen to it. It moves, it flows, it reflects,” Bronfman said. In Washington, the clothes are “higher-necked and a little lower in hemline,” she added, citing fashion designers Elsa Schiaparelli, Cristóbal Balenciaga, Jacques Fath and Christian Dior, in his “New Look” phase, as inspiration. “I do a lot of tailoring to indicate strength in terms of sharp shoulders or accordion pleats, and I add ruffles for softness, to echo what’s going on in a particular scene.” One of Bronfman’s signatures is to repeat key details on the cuffs.

And the covered-up, veiled ensembles are unspoken commentary on the restricted lives of the women. “For the maids, the veil sits right under the nose, and I realized that you can really read somebody’s face and tell their emotions by how they flare their nostrils, weirdly enough,” Bronfman says. “Even the commanders’ wives have a whisper of a veil over their face from the nose to the forehead because they had to put something on.” 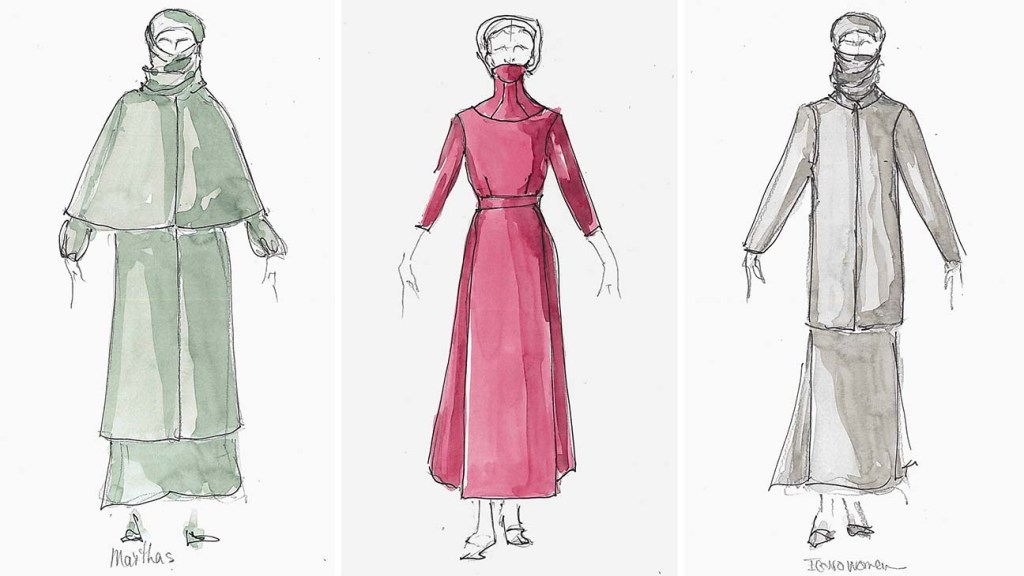 In terms of color, red has in past seasons signified the fertility of the handmaids, but the focus is a bit different in season three. Bronfman says, “I think what’s happening with the color red this season is that it’s going from being life blood to being a courage and power that steers the anger. You’ve got love and lust and anger and they’re all passionate emotions, so the red covers it all.”

The down-to-earth sage-green hue of the Marthas’ garb symbolizes their responsibility for the community’s sustenance, while a mulberry purple color, worn by the newly-introduced commanders’ widows this season, was inspired by the U.S. military purple heart decoration awarded to those wounded or killed in service to signify the women “having endured what they did,” Bronfman says.

As for the translation of the commanders’ wives shades of teal, she says: “The blue of the water, the teal range, means to be secretive or closed off because you’re going into the depths of the ocean. The deeper you get, the darker the green and the blue-green. Selena’s character arc this season is quite interesting because she goes from being very depressed (having lost her child) and being in dark teal colors to slowly getting brighter, and her shapes change as well. So I use the color tonality to bring in a bit of her psychological change, her power gets very bright and strong and clear.”

Summing the season up as a driver for her costuming, Bronfman said: “This year, the women are growing strong. They’re no longer just submissive wives; we start seeing their characters.” 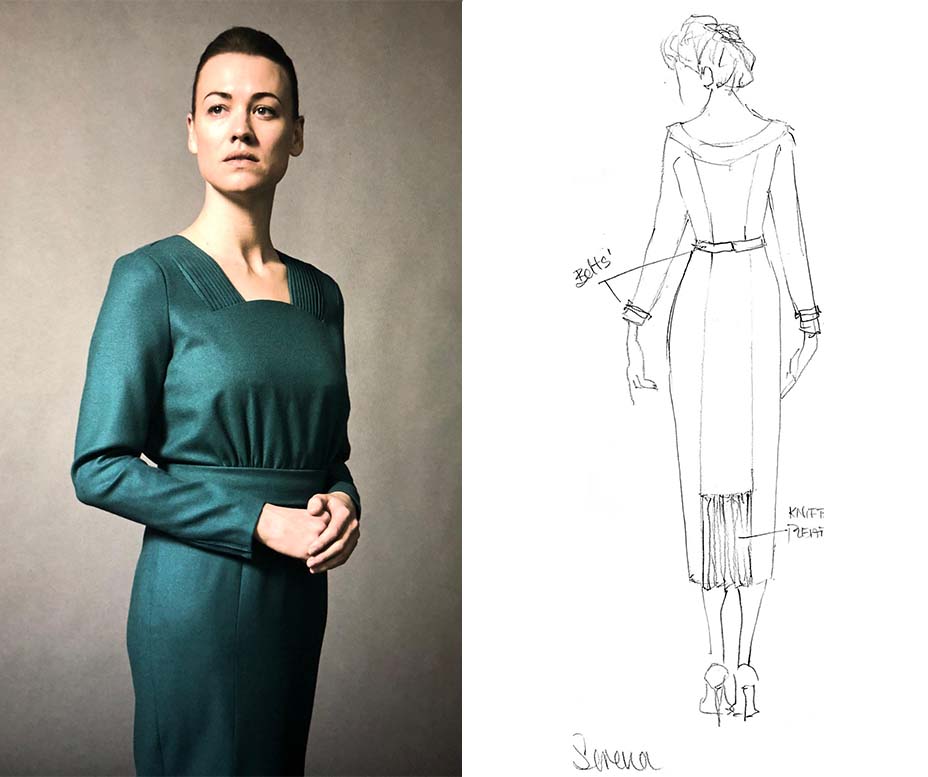