Can donning a cozy knit channel a warm-and-fuzzy public persona for perps? When wardrobing for courtroom appearances, some high-profile guys charged with sexual misconduct and worse have been reaching for the friendly sweater — seemingly as an antidote to help soften their image after being shunned by fans and the Hollywood establishment. Think of it as going for a neighborly Mr. Rogers vibe (as in the Tom Hanks-as-Fred Rogers trailer for You Are My Friend, debuting in October).

Earlier this week, Kevin Spacey strolled into a courtroom in Nantucket, Mass., for his arraignment hearing on sexual misconduct charges wearing a dark blue “family man” cardigan vest layered under his gray suit (and over a sweet floral-print shirt and wholesome polka-dot tie).

When turning himself over to police in New York City on charges of rape and other sexual allegations last May, Harvey Weinstein emerged from hiding in a rumply, professorial baby blue V-neck sweater (paired with a classic navy blazer, white button-front shirt and a stack of books, including Something Wonderful by Todd S. Purdum). 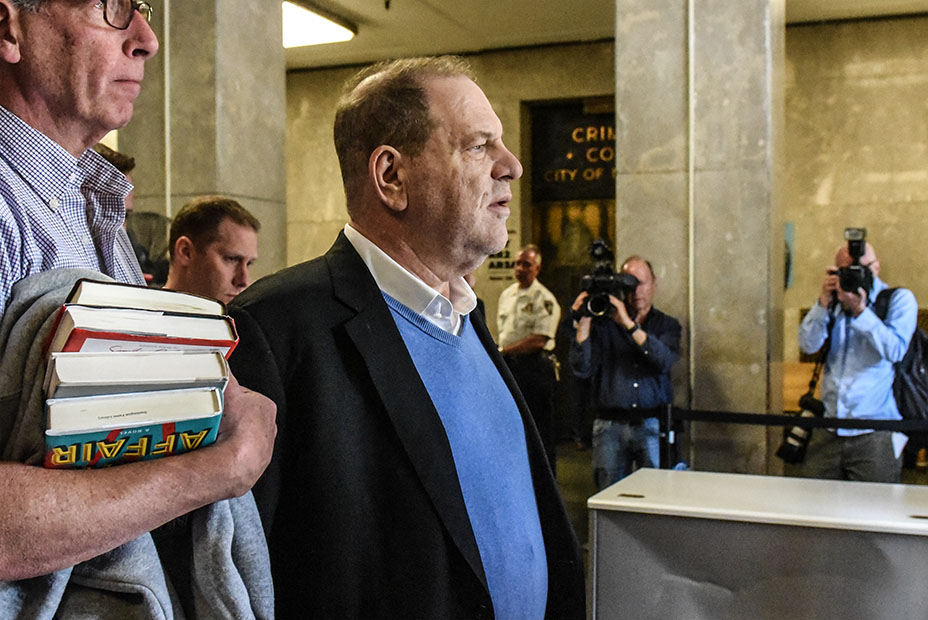 Bill Cosby is the OG of colorful, congenial sweaters, a signature of his role as America’s favorite dad, Dr. Cliff Huxtable on The Cosby Show since the mid-’80s. The term “Cosby sweater” (pretty much a synonym for “ugly Christmas sweater”) was even coined in reference to the charm of his flamboyant, dated-looking dad knits.

Yet in 2016, when Cosby stumbled to the courtroom door in Philadelphia to face sexual assault charges, his oversize tweedy hooded sweater with toggle closures (paired with a cane and worn-out satchel as props) was a far cry from the standard “Cosby sweater.” 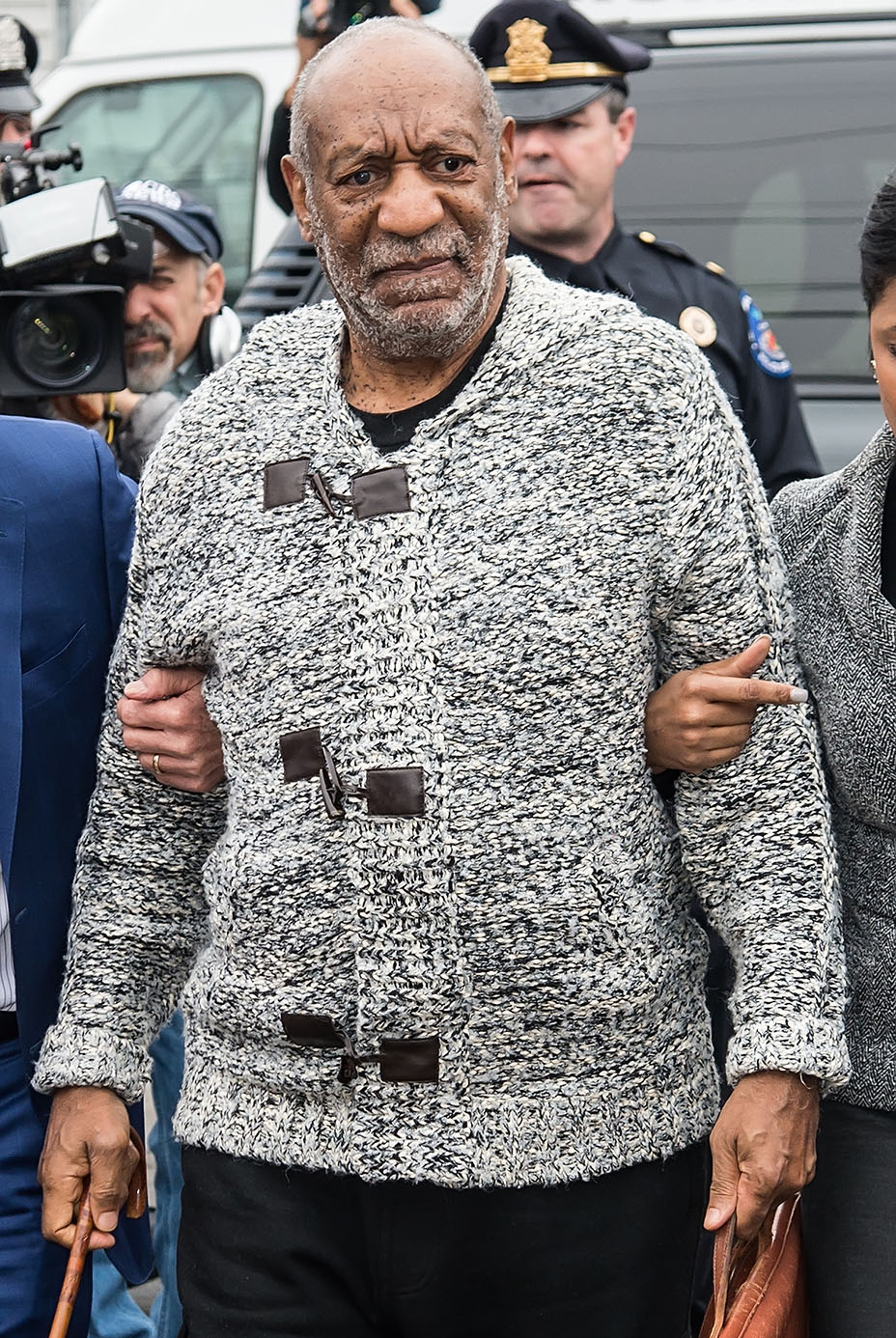 “It almost feels like you pulled Cosby off of his couch while he’s watching TV,” says Keren Ben-Horin, a New York-based adjunct instructor at the Fashion Institute of Technology, co-author of The Sweater: A History, and a sweater designer for over a decade. “The sweaters he wore on the show were more fitted to his body, but that one [in court] looked oversized and homey; it’s too big for him and a bit ragged like he almost wants pity. He’s so associated with sweaters in pop culture, so I wonder how aware he was of choosing that specific sweater on that specific day.”

As for Spacey, he “almost has an ‘English gentleman’ look and a cardigan vest is also very much associated with the home environment,” says Ben-Horin. “It’s relaxed, but very respectable. Weinstein’s look is informal, but very masculine and powerful, in a way. When men starting wearing sweaters as fashion in the 19th century, they originated from sports activities and they’re associated with this idea of men’s clubs, a relaxed masculine environment.” 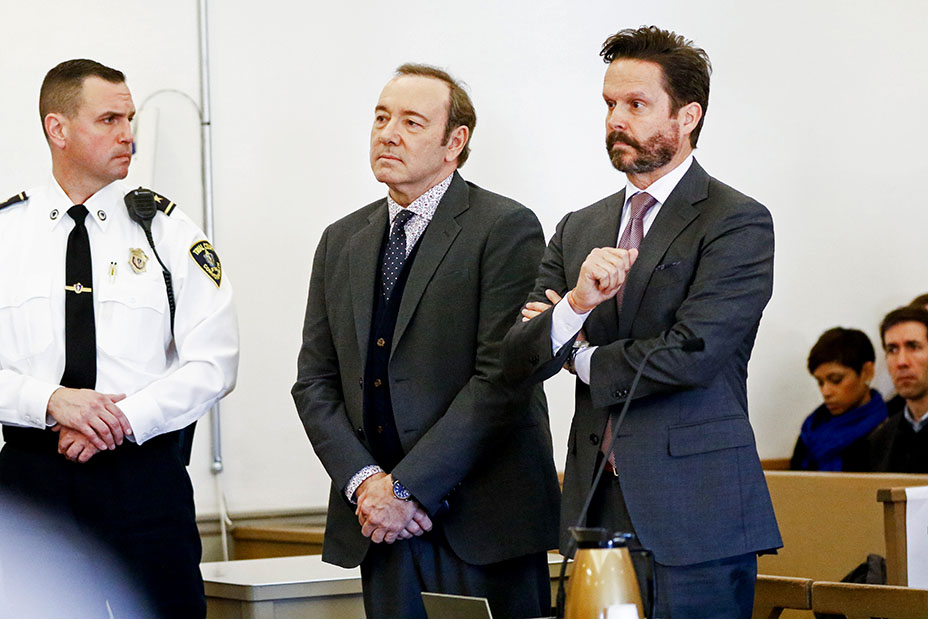 “If I’m going to reflect on what they’re all trying to tell us with those garments, it’s that, at least on the surface, they are feeling confident and at ease,” says Ben-Horin. “We think of the sweater as an informal, more relaxed kind of garment. So if you’re trying to figure out what they project, it’s that they are confident in their denials. A father figure also comes to mind; someone who’s not scary, but relaxed and soft.”

It’s highly likely that crisis management teams and image consultants have coached these guys on how what they wear can translate into a positive public perception (when millions of eyes are on them) not to mention having a persuasive effect on judges and juries.

“In terms of Kevin Spacey, it could be argued that his choice was purely prompted by practicality; it is winter and he’s layering up to battle the cold,” says fashion expert Bronwyn Cosgrave. A-list crisis manager and La Brea Media founder Howard Bragman — who has counted Monica Lewinsky, Chaz Bono, Stevie Wonder and Anthony Scaramucci as clients — elaborates: “Either they’re cold, because it’s hard to pump blood when you don’t have a heart, or they think the Father Knows Best look reeks of sincerity.”

And then there’s the leisure-time feeling that a sweater conjures up.

“I would argue that the sweater sporting of Spacey and Weinstein also signifies that these men are no longer gainfully employed and have a lot of time on their hands,” says Cosgrave. “Spacey is out of his congressman costume. Weinstein is no longer lording over boardrooms. And Matt Lauer has also been donning sweaters out there in the Hamptons!”

Lauer was fired by NBC in November over sexual harassment allegations. (In another sweater moment, a video captures him saying to Today show colleague Meredith Vieira: “Pretty sweater! Keep bending over like that; it’s a nice view.”) Since his dismissal, Lauer has been spotted in dark sweaters on several occasions, on a boat and on the streets near his home in the Hamptons.

To emphasize his man-of-leisure status, Spacey oddly sported a “Retired Since 2017” cap, with a Domino’s pizza box in hand, while in Baltimore on the week after Christmas. That hat in conjunction with the Santa-patterned apron he wore in the puzzling “Let Me Be Frank” YouTube video, released on the day before Christmas, argue for his being highly aware of the messages his wardrobe is sending. Who better than jolly old Saint Nick to project subliminal messages of peace and good cheer?

Erik and Lyle Menendez, who made eerily coordinating sweaters in cotton candy colors their trademark during their 1993 murder trial (one of Court TV’s first high-profile broadcasts), may be the ultimate poster boys for attempting to use the sweater to symbolize a boy-next-door image. 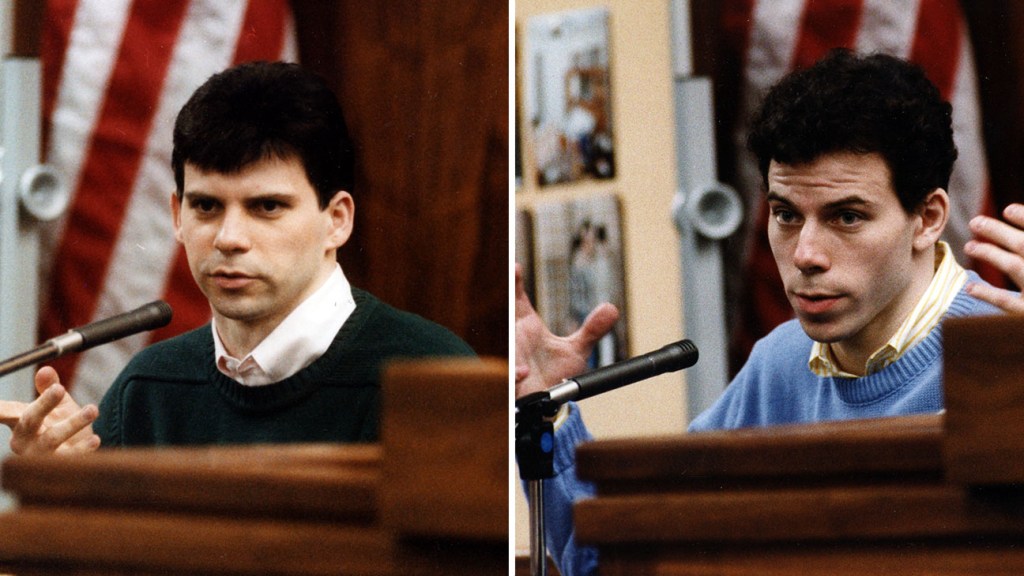 One thing all the sweaters have in common is that they are classic styles in solid colors.

“It’s always important [in the court room] that your clothes don’t say more than you do. And never be flashy, disrespectful or, God forbid, wear plaid!” says Bragman.