For well over a century, Parisian menswear and accessories brand Berluti has been meeting the sartorial needs of gentlemen ranging from John F. Kennedy, Frank Sinatra, the Duke of Windsor, Aristotle Onassis, Andy Warhol, Yves Saint Laurent and Pablo Picasso to (more recently) Usher, Brad Pitt, Will Smith and Timothee Chalamet. On Saturday, the LVMH-owned luxury brand officially opened the doors of its first L.A. store in Beverly Hills.

Berluti was initially founded as a footwear brand  by Italian shoemaker Alessandro Berluti in 1895 and has since expanded with a full range of handcrafted leather accessories (added in 2005), apparel (introduced in 2011) and lifestyle items (dubbed Toys For Boys, introduced in 2014). Since acquiring Parisian made-to-measure menswear brand Arny’s in 2012, the company has created head-to-toe bespoke offerings. There is even made-to-measure leather tattooing, using a specially developed method that has become a signature for the label. 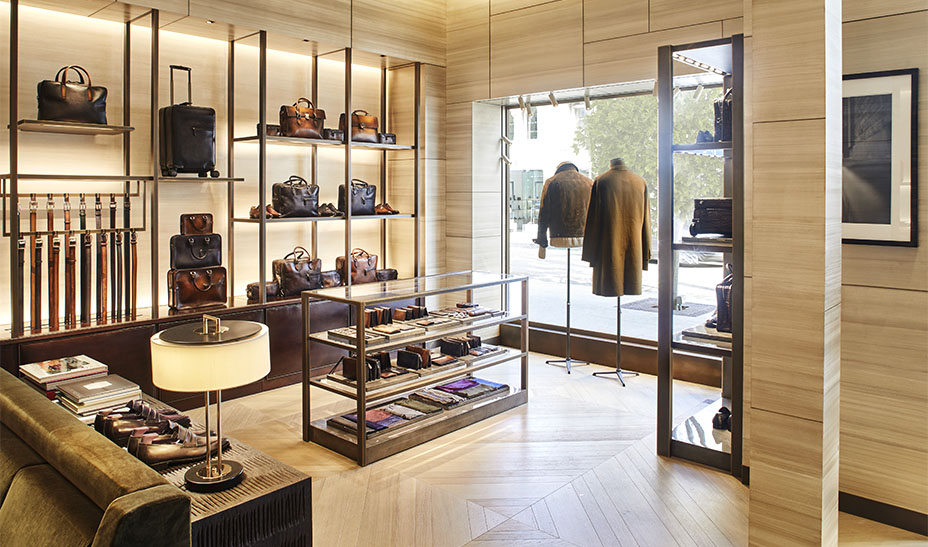 In September, buzzy designer Haider Ackermann was named Berluti’s new creative director, and his first collection is featured in the 1,100-square-foot space. Jewel-toned velvet evening jackets are on display in the front window, while highlights inside include roll-neck cashmere sweaters, black leather aviator jackets with accents of red or green crocodile on the collar lapels, skinny lapel suiting and an array of calfskin accessories in the wide range of patinas that is a brand trademark. (Shoes can be customized in over 40 colors of patina). A haute leather guitar case and a bicycle on display are made to order and there are also guitar straps in a range of hand-stitched leather and a $2,100 silver-plated, calfskin-covered whiskey flask. Exclusive to the Beverly Hills store is a limited-edition version of the 1960s-inspired Playfield sneaker in cream-colored lizard for a cool $4,500. 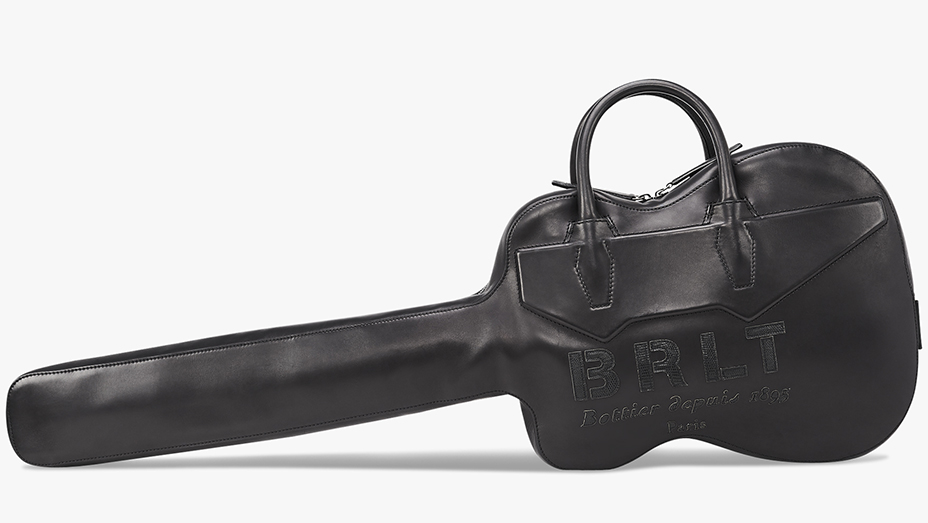 In line with the aesthetic of the products, the store décor puts a modern twist on traditional.  On display as art in an installment on the back wall are a large array of empty glass bottles tinted with a myriad of colors as an ode to the company’s storied footwear patinas, a method used by their master artisans for generations. The patina leather theme is repeated on a club chair and a leather rug, which sits on the blond-grey wood herringbone flooring. A vintage sofa, designed by Milanese architect and furniture designer Luigi Caccia Dominioni, is upholstered in plush green velvet, while display fixtures are composed of slabs of onyx, grey-lacquered shelves, stone finished to mimic the patina finish of leather, and bronze detailing.

“Much like Paris in the late-nineteenth century, Los Angeles is a city poised at a critical juncture between the past and the future,” said a press statement from the brand. “Fueled by an eruption of creative ferment over the past decade, L.A. has emerged as a global powerhouse in the arenas of art, architecture, design and fashion. Berluti is proud to play a part in the city’s evolving cultural transformation.”