Surrounded by red and pink roses and peonies, three models of various sizes showcased Klum’s fall/winter intimates range, which is priced from $25 to $170 and comprised of balconette and half-wire bras with matching thongs and bikini briefs, sexy silk slip dresses and robes, lace-accented bodysuits and maternity bras, to name a few.

As a former Victoria’s Secret Angel, the German model knows a thing or two about inspiring women to feel sexy. The designer herself fronted the latest Heidi Klum Intimates campaign, which was shot in Santa Monica by Emmy Award-winning director and photographer Francesco Carrozzini. 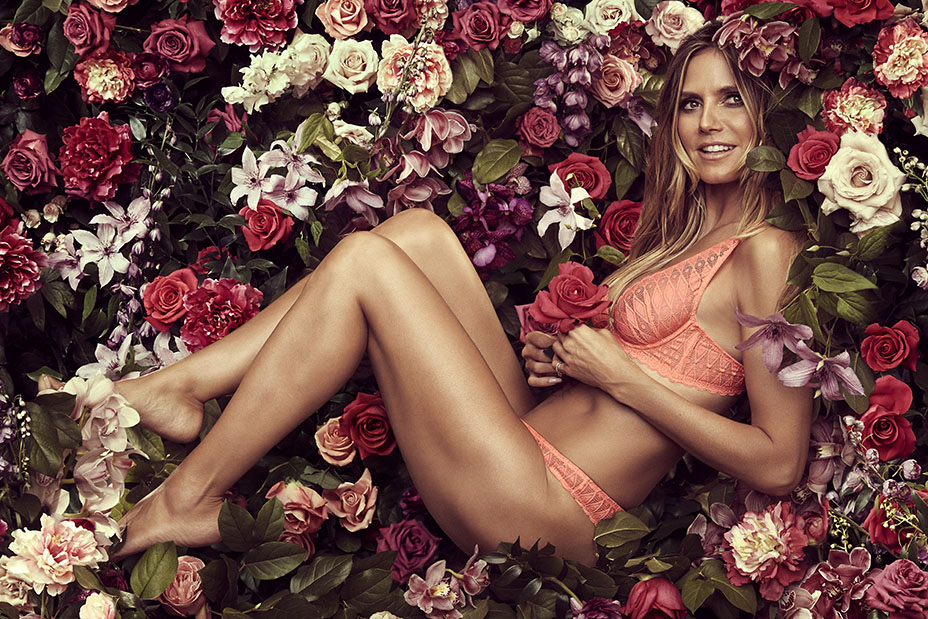 But in light of the country’s current political climate — one where a president openly berates women (remember when Klum fired back at then-candidate Donald Trump after he declared her “no longer a 10”?) — the 44-year-old mother of four hopes she can instill confidence from within, which is why she included a range of sizes and styles in her lingerie collection, including bras in sizes F and G, maternity pieces and a deep-plunge bra that’s “her personal favorite.”

“To be honest, at the end of the day it’s not [about] the lingerie. I don’t want to push my [line] and say [it’s] going to do everything for you, because it doesn’t,” she says. “Ultimately, you are the one that has to feel sexy in it. If you have a beautiful piece on and you feel extra special then yes, but it has to come from within. I can throw the sexiest piece on you but if you don’t feel it, it’s not going to happen.”

In addition to designing her intimates brand, Klum is also set to debut her very first apparel collection with German supermarket chain Lidl, which reportedly plans to open over 600 stores in the U.S. Named Esmara by Heidi Klum, the label will include trendy and affordable pieces, including a leather jacket, from $7 to $30.

The Hollywood Reporter sat down with Klum following the brunch to learn more about where she finds design inspiration, her favorite Project Runway memories, her Halloween costume plans this year and more.

Your annual Halloween party is just a few months away. What do you have planned for your costume this year?

It’s going to be a scary one this year; in 2013 I was me [as a 95-year-old]. … Literally [that] happened because I was like, “How am I going to get out of having to do prosthetics?” Then last year, I was like, ‘I wish I could clone myself.’ This year, I’m actually going to be very scary again.

Now that Project Runway is celebrating its Sweet 16th season, what are some of your fondest memories from over the years?

I would say the very first episode ever, that kind of set a tone [when contestant] Austin Scarlett did that very famous corn-husk dress. That was the very first episode, and we gave them the unconventional materials challenge where they went into the supermarket and they could [use] whatever they wanted. He just grabbed a bunch of corn, ripped the husks off and sewed the dress from that; we had to refrigerate it overnight. That will always stick [out] in my mind. Really, all of the unconventional material challenges, they’re always amazing.

Have you ever gotten starstruck by a Project Runway guest?

I love Bob Mackie. Some people kind of get starstruck with different actors; for me, it was Bob Mackie. He’s just so over the top and so flamboyant, [especially with] all of those Vegas outfits that he did for these gorgeous girls who were dancing. I actually did a photoshoot [in Las Vegas] once and I got to wear some of [his designs] and it was amazing. Fantasy! I wish we would still dress like that.

What can you reveal to us about this season?

Our very first episode this year, the designers have to do a red-carpet look, so we immediately hit them with a frying pan basically over the head and [challenged them to create it] in one day. You know, most designers take months to do that, so we keep them on their toes.

This is also the first time that models of all sizes will be included. What are your thoughts on the timing?

It’s shocking, actually, that we haven’t done this earlier. I [have always said] it is important that designers can design for women of all sizes because women are shorter, taller, more voluptuous, skinnier, in between, everything — so you have to cater and design for all women. I also keep that in mind when I design lingerie, that I don’t just have lingerie that goes to like, [size] D. We go to F, G — it’s important because there isn’t a lot for women with larger breasts out there.

Now that you’re a lingerie and clothing designer, have you picked up any tips from Project Runway?

I wouldn’t say [I’ve picked up any] “tips,” but I think subconsciously everything you see does get stored in your head somewhere. I don’t want to say [that the show] doesn’t inspire me because it must somehow, and especially with me [because] I’m a very visual person. [For example] if you come to my house, it’s very colorful. I have paintings everywhere, I don’t get rid of anything, I collect weird things from all over the place, I have every boarding pass [for] any plane that I’ve been on, I collect heart rocks from the beach. I’m crazy — I have a lot of stuff! Our house is not a showroom, so I’m very visual. And I’m a little bit of a hoarder, it’s a little bit of a problem. I collect a lot of things.

What other interesting things do you find yourself collecting?

I also collect old [Schildkrot] dolls that were made from celluloid and they have a turtle [logo] on their backs. I have them with the glass eyes, even older ones [that] the eyes were painted on — I have [about] 60 and [the kids] can’t touch them. I also have a lot of Barbies — [she] was me at one point.

Where else do you find design inspiration?

I’m always looking. When I’m [on] holiday and I see a weird color combination of something that someone is wearing, or I go through a small magazine in a different country that I haven’t seen before, different things that I find, or I go in a flea market and I see an old jacket or something that I love — there’s something about it, if it’s an embroidery or if it’s a certain button.

What are some of your favorite pieces from the latest lingerie line?

My personal favorite is the deep plunge — so when you look [at how the collection] has developed over the last two years, before everything was kind of full coverage, most of them were push-up [bras] and a lot of pads because the look back then was the bigger the better, the higher the better.

I personally like more of a natural shape; I don’t mind when a breast hangs naturally a little bit, I don’t think they necessarily have to be as hoisted, even though some girls love that and they should have that and it looks great on [them]. That’s why you’ll find within the line more triangles, more deep-plunging, more half-wires.

I want to make sure that there’s something there for everyone. I’m doing a lot of bodysuits, not only because they’re trending right now, but because they also help because they hold you in [especially] if you feel more modest. For example, my hairdresser, who I work with a lot, she wears [bodysuits] all the time, she doesn’t even wear a bra. Because someone like a hairdresser, for example, her arms are up all the time and she doesn’t want to show [skin] … so she always wears a bodysuit underneath.

You’ve been involuntarily dragged into the political conversation before. What are your thoughts on the recent events, like the attack in Charlottesville?

I think the world is a really scary place right now, so for me being in the entertainment industry, I try to make people laugh. That’s why I love what I get to do every day; I try to [get] people to feel good, when I’m on TV and I do America’s Got Talent for two hours, for example, I love that I can be part of a small something that lets people escape for two hours. You turn on the news, you look at your phone, you browse the internet — there’s one horrible thing happening after the next. I love being part of an outlet for people [so] that they can have a laugh, and they can forget about the real world for a little bit.

I’m sure social media doesn’t make the situation much better.

I mean, the world has changed so much from when I was this young, because of social media. As good as it is for my industry, I’m not sure how good it is for this next generation. I do think that it’s also different; I can’t compare myself with what most people do because I do live in this entertainment bubble. I’ve always been in this industry where you want people to dream, right? You look at magazine covers, [everyone] is smiling, we’re happy, we’re looking good [and] having hair and makeup done and wearing beautiful clothes. That’s not real.

People are living in this [social media] world and looking at all of these things right now on their Instagram feeds and this and that, and it can be scary for children to grow up in that. You have to make sure that they still understand what is actually real. Not everybody needs to be famous, not everyone needs to be the next this or that — it’s not for everyone, too.

Has that affected your approach to parenting?

I try for them to be children and I try for them to [stay] humble and real, which is also tricky when you live in Los Angeles. Being home at night at 6 o’clock eating dinner with them and trying to keep that old-fashioned family style alive — I try to hold onto those values as hard as I can. I mean, I’m trying, we’ll see how it goes. We can only do as best as we can.