Priscilla Valles can turn a pop diva into a unicorn or match a socialite’s hair to the color of her car — and it all happens thanks to the magic of extensions.

“Christina Aguilera wanted to be a unicorn for Halloween and she wanted a horn made of hair — so we constructed it out of intricate braids of multicolored extensions,” says Valles, a Beverly Hills-based stylist with a client roster that includes Kylie Jenner, Chrissy Teigen and Hailey Bieber, among many others. “I couldn’t even tell you how many bags of hair we used, it was the most elaborate thing I have ever done. It took two days to build — there is still glitter in the corners of my studio — and three hours to put it on her.”

You don’t have to be an A-lister to reap the benefits of Valles’ techniques, however. The hairstylist-to-the-stars recently partnered with the newly renovated Palms Casino Resort in Las Vegas on her first-ever open-to-the-public salon experience. To book an appointment with Valles, you must first fill out a consultation form and, if accepted, a set of extensions will set you back $2,500. Then the service is performed in Valles’ exclusive suite within the salon. She will be in residence at the casino-resort a few days every month. 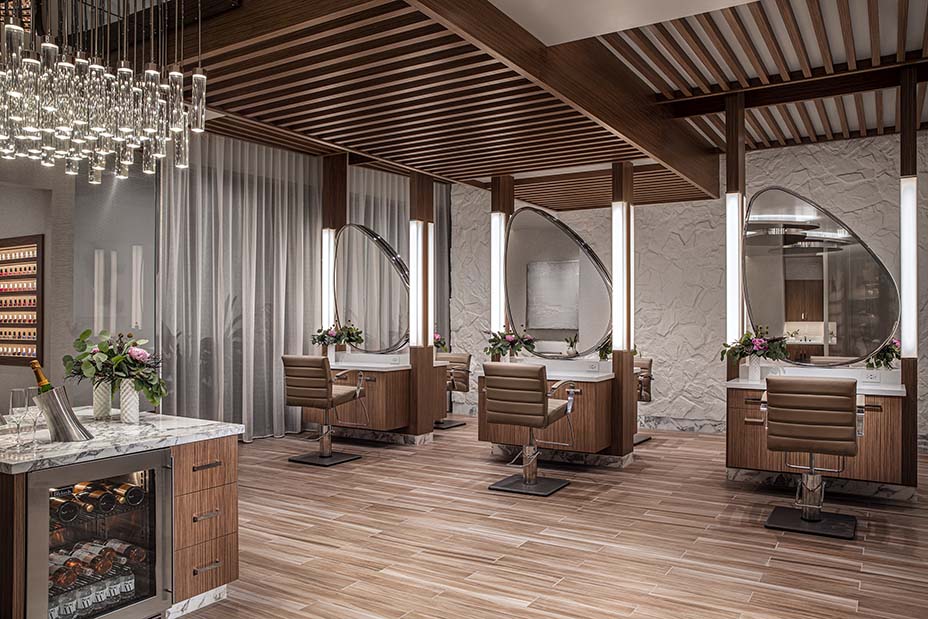 “Most of my clients are in the entertainment industry and I do specialize in a lot of extensions, which are such a vulnerable, intimate service. I want them to have some privacy [in my suite],” Valles tells The Hollywood Reporter, mentioning that Aguilera, who is starring in The Xperience at Zappos Theater at Planet Hollywood, has popped in to say “hi.”

Working the freelance beauty circuit in Los Angeles for 18 years, Valles has long had a private studio in Beverly Hills that is by invitation only, where she sees one client at a time. But at the Palms salon there will be six stylists who are “an extension of myself,” she says, each having undergone rigorous training to master her process of extension application, removal, color, styling, cutting and blowouts. This marks the first time that Valles has shared her secrets. “I handpicked every stylist that’s going to be here. They did an audition — we had people from all over try out,” she says.

Additional beauty services include a manicure station as well as five pedicure chairs. In true Las Vegas style, the salon overlooks KAOS day and nightclub. The salon is part of the new Palms spa, a three-level paradise dedicated to unique treatments and state-of-the-art skincare. Taking a New Age approach, the programming is based on reiki, aromatherapy and chakra balancing. Some treatments include crystals and others are designed around the zodiac signs — with names such as Enlightening, Reigniting, Elevating and Grounding — and based on an individual’s energy. The spa will also offer oracle reflection and chakra balancing, which begins with a seven-card Tarot spread and concludes with a crystal healing to help restore alignment and balance.

Valles’ social media presence helped to catapult her to beauty fame. It was on Instagram that Kelley Nemiro, a member of the family who owns Palms, first saw her work. “I have been doing Chrissy’s hair for a really long time and she’s actually one of my first clients that posted about her extensions — when she lost one,” says Valles. “A lot of people don’t want to talk about their extensions. When she lost it, she tagged me, and everyone was like, ‘What? You have extensions? I thought that was your hair.’ Kelley was one of the people to see that post and she sent me a DM and said, ‘We live in Vegas and we’d really love for you to do our hair [myself and my sister].’ They ended coming to L.A. and doing a consultation. That was about four years ago. And I’ve been doing everything for them ever since.”

In the world of extensions, there are many options. Valles favors the individual and tape variety for their versatility over wefts, which are sewn in. “I really love individuals because you can build a wig on the head. I can add highlights. I can add lowlights. In my individual pack, I’ve got six colors in my pattern and I build up the color on the head.”

Valles invites clients to show her a picture of their hair goals and then they collaboratively sit down and come up with the look. “I have a hair vendor that sources the world. If you say, ‘I want extensions and this is the texture that I want,’ I will find you that texture. I will find the color. It’s a custom order — it takes about two weeks to a month,” she says. “I do also work with companies that manufacture, which I can get same-day and next-day but, because it is a human growing element, I really like to work with custom, raw, virgin hair. Especially on action films when everything is zoomed in and close up, it has to all blend naturally.”

For walk-ins at the salon, Valles has a library of on-demand hair in different colors and textures. “When you come in for a blow-dry, I really want the stylists to be able to thicken up a client’s ends a little bit or put a couple of tapes in and then do a blow dry,” she says, noting that she recommends changing extensions every four to five weeks. “It’s the ultimate hair transformation. When I’ve got clients in the chair and the extensions are out, you start to see the shoulders come back a little bit and they start feeling like themselves. It’s really special to watch that happen every single day. I have a full head of tape extensions. I feel like a plucked chicken without them.”

Originally hailing from Burbank, Valles knew she wanted to do hair from the time she was a kid, as she gave makeovers to anyone she could in her family. She earned her cosmetology license before finishing high school and began working part time for famed hair stylist Sheila Stotts. Building her business by word of mouth, the turning point came when she was called upon to create the groundbreaking black and platinum hair look for Aguilera’s 2002 Stripped album and tour. Since then, she has worked on every big name in the business, including men like Jake Gyllenhaal for his long flowing locks in the 2010 Mike Newell film Prince of Persia. “His hair was about an inch-and-a-half long — I ended up using 20 bundles on him. It was seven hours of just application,” Valles says.

And the hair needs of her mane crew are non-stop. Even when she’s out of state opening a business, Valles flies back at the drop of a lock for hair emergencies. “[For my clients] I plan around their tours, their travel, everything for every year is pretty much set,” she says. “Of course I get last-minute calls and I make room for that. It’s a 40-minute flight [to Las Vegas] — it takes me longer to get from my house in Beverly Hills to Kylie’s in Calabasas in the time I can fly back and forth.”

Responsible for Jenner’s internet-breaking, ever-changing hairstyles, Valles loves the way the beauty entrepreneur embraces color: “She’s been experimental with her color. She’s a trendsetter. Out of all of my clients, I’ve never seen anything like it. The second I started working with Kylie, I feel like that’s when things really changed. She sent me a picture of her car and was like, ‘So, I wanna do baby blue like the Rolls Royce.'”

And because there is no request too great, too outrageous or too over-the-top in the hair game, Valles happily obliged. “We’re in the service industry, and that’s something I take very seriously,” she says. “I nurture and take care of my clients, no matter what.”

For appointments, call The Salon by Priscilla Valles at (702) 942-6865 or email priscillaextensions@gmail.com