The Los Angeles Convention Center hosts more than two million visitors each year, according to its website, which also lists these fast facts: 350 events each year; on-site parking for 5,600 cars; and 64 column-free meeting rooms.

On Nov. 6, the LACC opened its doors to Adobe MAX — billed as the largest creative conference in the world — and that host reserved a spot on the second floor for a special guest speaker, Hollywood tattoo artist Dr. Woo. It wasn’t the flashiest of rooms, or one that even seemed to be from this era, but Dr. Woo didn’t seem to mind. He sat in the corner of room 506-1, wearing sunglasses, a denim jacket with bones on the sleeves, and tie-dyed jeans — an ensemble he says he snagged mostly in Japan, one of his favorite places to shop.

Kirstie Alley, Actress on 'Cheers' and 'Veronica's Closet,' Dies at 71

Dr. Woo became famous for inking stars inside Sunset Boulevard’s iconic tattoo shop Shamrock, and for the past two years, he’s been operating from his own private space called Hideaway at Studio X. Stars have still been flocking there, too, in order to get his now-famous single-needle-style tattoos. The work speaks for itself: a Bahamian palm tree on Zoe Kravitz, a jar of Vegemite on Miley Cyrus, dragons (of course) for Emilia Clarke, a cityscape on NBA baller Blake Griffin, and the list goes on.

Speaking of lists, though, you may have heard this little rumor — to book Dr. Woo, it takes two years. The Hollywood Reporter sat down with the man himself inside that glorified cubicle to get the skinny on just how long it takes to schedule a session with him, how he plans to expand his empire following clothing and design collabs, and the longest distance he’s ever traveled to ink a private client.

Let’s pay respect to our hosts. Why did you say yes to Adobe, and how do you use their products?

I really, truly want to do things that are organic and things that I actually use, and my manager’s like, Adobe’s [calling] – dude, I actually use Adobe since like every day, and also since I was a teenager. I never thought of it as a collaborative thing, because I just never pictured how that would work, but then you think about it, it’s like collaborate with it, using their products every day in a sense, you know, using their tools to enhance my images or just make daily creative life easier.

Creating the images, shaping, re-shaping, laying things out, communicating with clients. It’s just an extra trick in the bag that just makes everything go smoother. [As part of his daily work, Dr. Woo uses Adobe Scan, Adobe Acrobat and Photoshop to design and collaborate with his clients.]

The New York Times described you as quick-witted and eminently chill. Creative people aren’t known to be the most chill all the time — to what do you attribute that?

I try to be chill. I try to, like, bring the temperature down a bit, because if you wind yourself up too much it could be an explosion. It works for me. I don’t think it works for everyone else. Some people work on different levels, but for me this is the way that I am.

One thing that works for you is whatever you wearing. Let’s talk about today’s ensemble.

I just got home from Tokyo, where I love to spend all my money. The designers and the brands out there take a little bit more time with the attention to detail and the quality of fabrics. All those things are very important to them. Their identity is so strong, and they really nurture the creation process for them. They don’t settle. It’s kind of like me; they want to put out the perfect thing. When I’m there, that’s where I gravitate to.

Let’s talk Hideaway. How’s it going over there and finally having this space to yourself?

It’s good. Coming up in [the tattoo world], I worked in one of the busiest and most famous shops in the world, and the downside to that was I had no space. I really had no time to really just be myself. It wasn’t my space. I was in someone else’s house. Rightfully so, it’s an amazing mansion of a home. But you still need your own little closet or you own little room. Hideaway is … a good exercise in kind of getting in touch with myself creatively and just creating a space that enables me to feel very open with my ideas, and being able to just like sit and think and create. … It’s not typical tattoo shop vibe. There’s not flash on the wall. It’s a place where you feel like you just want go hang out and do whatever.

There have been reports that you’re booked two years in advance. Is that true? How far out are you booked?

The honest answer is the two-year thing came out of nowhere. The reality is I just don’t have that many slots open, so it might as well be two years. It could be eight years. It could be two weeks. I’ve been traveling so much the last couple years. When I’m home it’s either by referral or word of mouth of a friend; return customers. I have an assistant and … if you have the contact you kind of just hit him up. When I’m home, we just try to get those people in. I want to open it up again to new clients and stuff and not feel burdened to get the same people in constantly. But that’s kind of why it’s two years, because it’s just not — there’s no line, really. It’s kind of when I’m in town for two weeks, who we working on?

You do have so much other stuff going on, from design collaborations and collections. Where do you want to take the Dr. Woo business?

The spirit and the energy that I’ve always wanted to put out is bigger than tattoos, you know. From fashion to art to food, it’s everything that inspires me. I don’t know whether it be art or if it’s clothing or housewares, ceramics, anything. Anything that inspires me, I want to be able to have the freedom to try to make it the best that I can with my flavor on it. Right now we’re growing. There’s a jewelry line that I created and a skincare brand that we’re working on. Those are two things that may seem a little off from what tattooing is, but it’s actually, to me — that run parallel to each other.

Unisex. It’s gonna be inspired by tattoo aftercare, have a little foot in the door, but the reality is, it’s all-encompassing. It’s not just for people with tattoos. I’ll put it on my kids. It’s clean. Everything’s organic. It’s kind of the flavor of what products should be now. Natural. I think that those kinds of projects really push me and inspire me to just see how broad my aesthetic and my imagery can go.

Any place you won’t tattoo?

I feel like there’s a moral responsibility as a tattoo artist, and it’s something that I don’t feel that person may have thought out. I won’t do it.

Bangkok. Australia? I went to Australia. I tattooed two times. One was Katy Perry’s tour, but then another one we did in Sydney, this open tattoo raffle thing for this L.A. Australia Travel Project.

What about on your own body?

Portrait of my grandfather by Mark Mahoney.

Do you have a favorite artist?

Yeah. Mark Mahoney and Freddy Negrete. The two guys that are my main mentors, I think.

What are you watching, consuming, reading right now?

Righteous Gemstones, Succession, and I’m watching Watchmen. I like Watchmen. 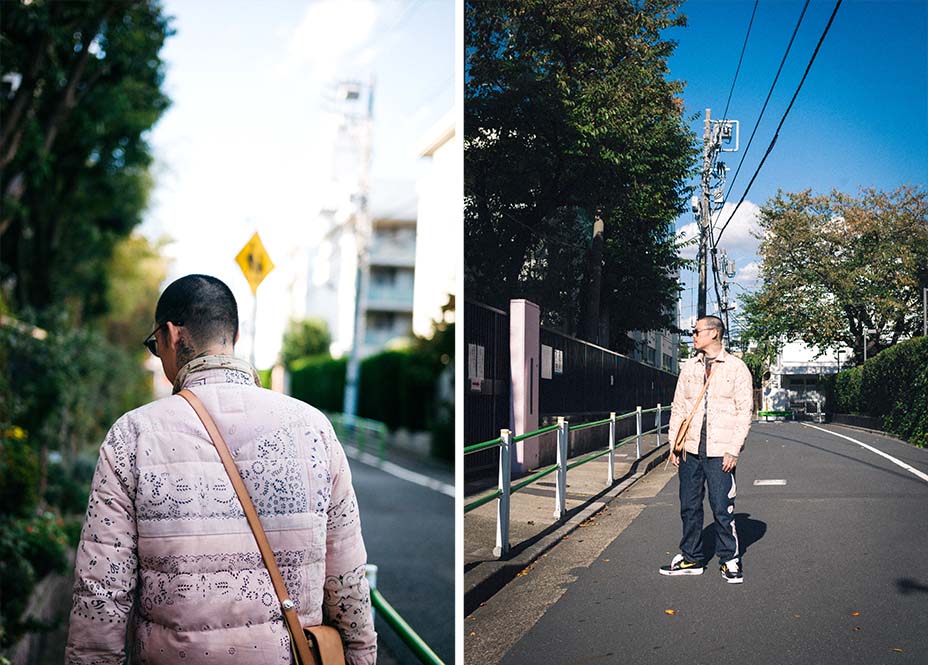 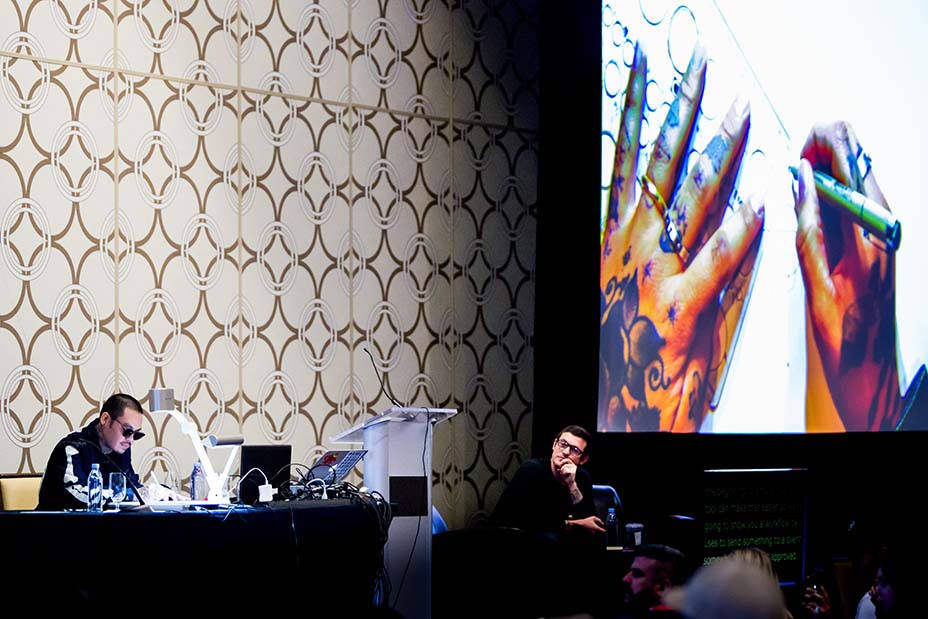 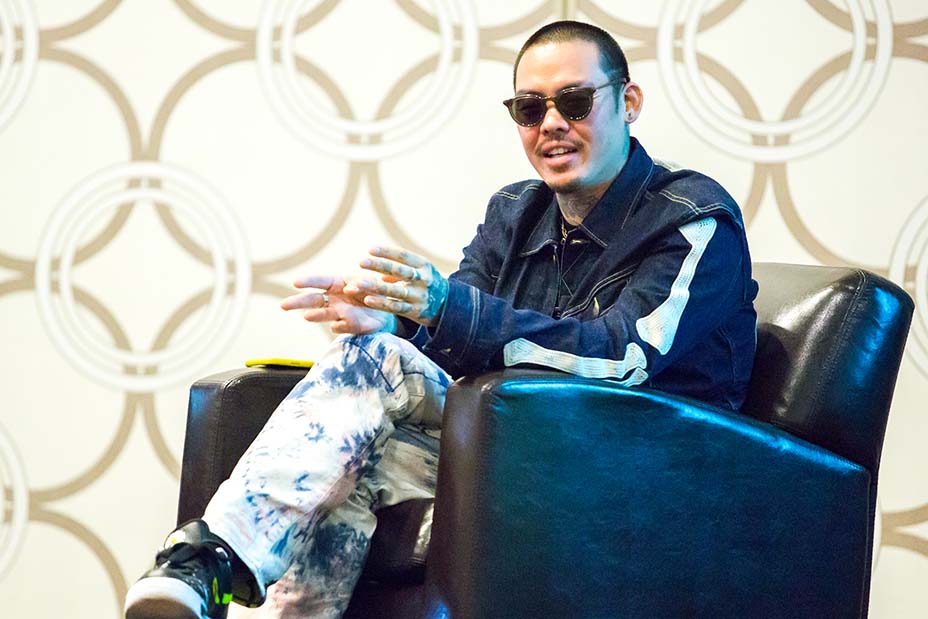