You’ll find only five or six Edie Parker clutches in Brett Heyman’s New York apartment. The designer once kept as many as 50 of her signature evening bags in the bedroom of her Upper East Side home, but recently decided it was time to pare down. “I love displaying them on shelves, because I look at them like little pieces of art, but I think it became a bit overwhelming for my husband,” she says.

A second home in Connecticut inherited the bulk of her collection, but Heyman could always access her latest resource in case of a fashion emergency: Her first Edie Parker boutique, located at 781 Madison Ave. The 1,000-square-foot boutique opened in late February on a prime block for Manhattan retail, between 66th and 67th Streets. “This was my dream spot on Madison,” Heyman says. “We’re in a beautiful building, and it’s small and elegant and perfect.”

Heyman could just as easily be describing her evening bags, which have garnered an A-list fan base that includes Mindy Kaling, Anna Gunn and Lupita Nyong’o, while Ruth Negga carried one of the latest Edie Parker styles, the Wolf Shard Lock clutch, featuring a jagged, oversized clasp, to last week’s post-Academy Awards Vanity Fair Party. With the 2017 awards season complete, the next major red-carpet opportunity will be the Metropolitan Museum of Art’s annual Met Gala on May 1, another popular event for Heyman’s designs, she says.

“The Oscars tends to be more classic and low-key, neutral-toned bags that are clean and don’t distract from the dress,” she explains. “But the Met Gala is where we get the most fashion-forward requests; everyone wants to go all out for that event.” Emma Roberts, Kate Hudson and Allison Williams are among those who have carried Edie Parker clutches at recent Met Galas. Why do her designs attract such a healthy celeb following? “They either disappear, because they’re not heavily ornamented, or they’re a really cool piece of art,” Heyman says. “There really is something for everybody.”

Edie Parker is best known for its series of acrylic box clutches available in a wide range of colors, often imbued with whimsical designs or irreverent phrases; her garden-themed Spring 2017 collection includes pieces emblazoned with double-entendre words like “Weed,” “Herb” and “Dirty.” And chief in the did-you-know department: Heyman’s acrylic designs are made in the U.S., with the acrylic poured in a New Jersey factory to create panels, which are then shipped to Illinois, where the clutches are assembled.

Keeping the process relatively local allows for the bespoke orders that have become a large part of Edie Parker: Heyman estimates that roughly 20 to 25 percent of her orders are for the personalized bags similar to the “Mindy” clutch that Kaling carried to the 2015 Emmy Awards. To coincide with the boutique’s opening, Edie Parker has introduced a double-sided bespoke clutch. “One of the great things about manufacturing here in America is that I also can make adjustments fairly quickly,” Heyman says. “If someone changes the color or the fabric of a dress, as long as I still have a minimum of two weeks, I can make a change as well. And every time there’s a new iPhone design, we’ve been able to adjust the dimensions of the bag pretty quickly.” (The soft Edie Parker bags in suede and linen or velvet are crafted in Italy, she adds.)

In 2016, those signature box clutches inspired a home collection, as Heyman looked at the handbag’s structure and likewise envisioned it as a jewel box, a vessel for coasters and, in another iteration, a serving or vanity tray. Bergdorf Goodman picked up the Edie Parker home accessories, offering them on the retailer’s seventh floor alongside other home-décor pieces, though they were seemingly miles away from the Edie Parker clutches on Bergdorf’s famed main floor. By this time Heyman, who launched Edie Parker in 2010, had already begun thinking about how nice it would be to gather her entire collection in one cohesive space. 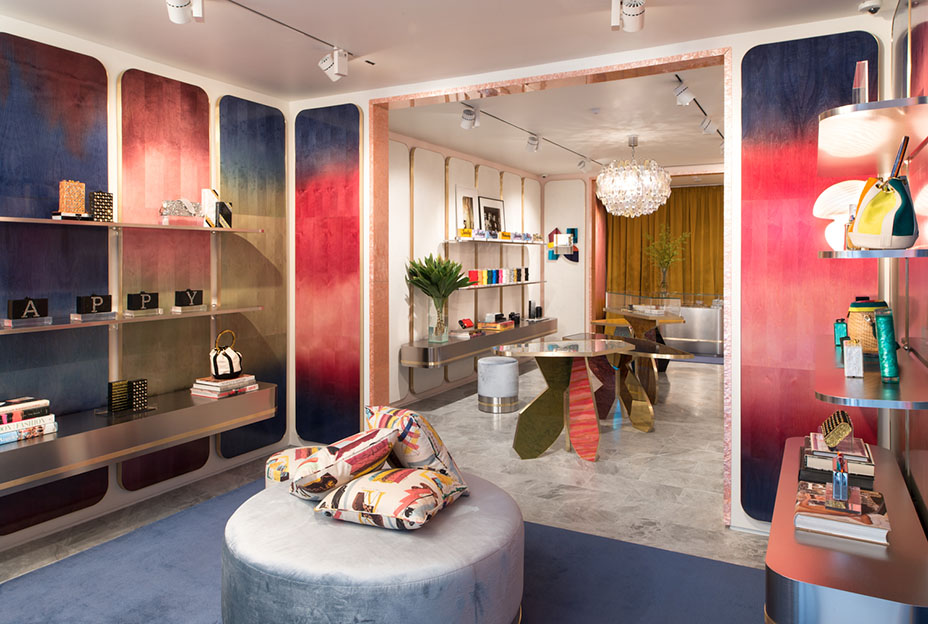 The Madison Avenue boutique took roughly a year of planning: Heyman collaborated with New York-based Studio Muretto on the boutique’s design and, not surprisingly, the use of acrylic plays an integral role. “It’s glossy and a bit ‘60s-inspired and adds a cool architectural layer,” Heyman says of the acrylic elements, which include an archway at the boutique’s entrance and a color-blocked display table that’s also available for custom order. A self-portrait by Los Angeles-based artist Alex Israel, meanwhile, dominates one wall. “It’s a really colorful, vibrant world, and also really tactile — a little Gio Ponti mixed with Gloria Vanderbilt, and a sense of real irreverence,” she adds.

Born in New York but raised in Los Angeles, Heyman says that when the time comes for a second boutique, L.A. is her only choice. But two weeks into her first retail venture, she admits that a certain giddy feeling shows no signs of waning. “Because I live in the neighborhood, I walk by the boutique on my way to work, and I stop in there every day on my way home,” Heyman says. “I started drawing boxes in my dining room seven years ago, and now we have a store on Madison. Every morning is a pinch-me moment.”