In biblical times, it was said that Samson lost his strength when he was shorn of his hair. In today’s world, though, committing to a fully bald head has become a power move that signals confidence, strength of purpose, maturity and a certain no-nonsense quality. Forget the leading-man mane: It’s almost comical to imagine locks flowing from the dome of Dwayne Johnson, while Jeff Bezos presents a take-no-prisoners pate (the better to offset his amped physique) as his Amazon empire expands from retail to entertainment. Metaphorically, smooth-skulled Michael Avenatti has lost nary a hair since taking up his celebrated position as Trump administration thorn, and, who knows, a 2020 presidential candidate.

“There’s a ton of examples of men, in front of and behind the camera in the business, who have made it look good: Jason Statham is a sex symbol, and I worked for Jeffrey Katzenberg at DreamWorks,” says Peter Gal, executive vp development for DreamWorks Animation Television. “I mean ‘look good’ visually, but also in terms of their persona and confidence.” The other benefit? “Bald men are ageless,” says comic Jeff Ross. “You don’t know how old Bezos or Pitbull is. You’re not going gray in front of the public.”

While Starz CEO Chris Albrecht is self-confident enough to joke to THR that the one thing Hollywood power doesn’t get you is “hair on your head,” the path to pate acceptance isn’t always smooth. Gal began balding when he was starting out in his career, taking Rogaine and Propecia to forestall the inevitable. “Being bald in my 20s felt ‘not right’ somehow,” he says. “It took me a few years to get comfortable with the idea. I buzzed it off around the time I turned 35. But if I could tell younger people now, I would tell them, ‘Don’t take anything. Buzz it off and enjoy your life.'” 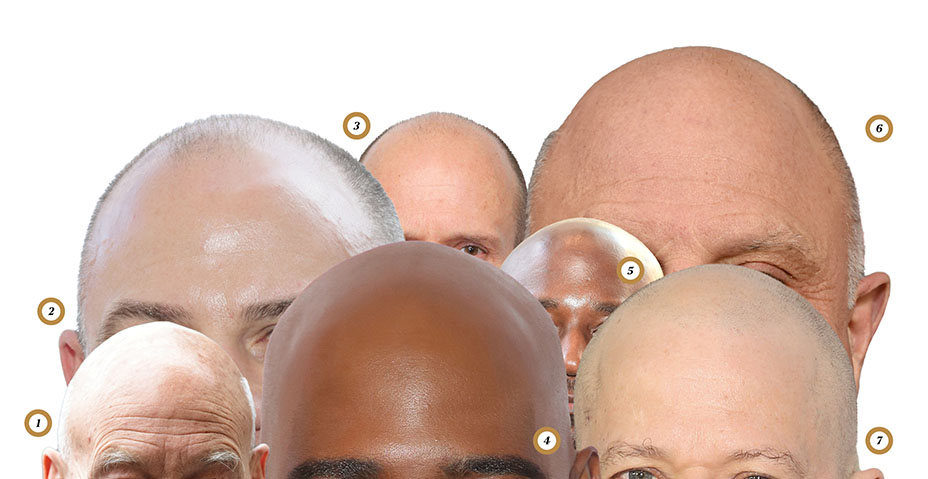 Bosch actor Lance Reddick says he started shaving his head during the third season of The Wire. “The second season, I noticed my hair started thinning, so they began filling it in. The third season, I just said, ‘Screw it.’ Now I seem to play a lot of authority figures,” he adds, “whether it’s demonic or a CEO or a police chief. Part of coming into my stardom later in my career was growing into ‘my type,’ and being bald fits that. Except for the fact that it’s an extra thing I have to do in the morning, I don’t even think about it anymore.”

Going full bald just looks better than thinning hair, says NBC analyst and best-selling Game Change author John Heilemann, who buzzed it off during his honeymoon in Kenya and never went back. “It’s just the right play aesthetically. Universally, most people said I looked better,” he adds. “It’s the diametric opposite of a comb-over, which comes off as needy and pathetic, like ‘I’m trying to fool you.’ But you’re not fooling anyone.”

For some, it’s a style choice that isn’t even dictated by biology. As Reddick observes: “Look at Terry Crews — a full head of hair. He just shaves it because he thinks it’s cool. I hate those guys. Isn’t he cool enough?”

To complement your full bald, ponder growing a beard, mustache or goatee.

Smooth skulls require as much maintenance, if not more, as a head of hair. Control dandruff and oily scalps with regular washing and conditioning: “If you had a favorite shampoo and conditioner pre-bald, don’t toss them,” says Amos. Expect to buzz your head at least two to three times a week and note that “it’ll take practice to learn what pattern your hair grows in,” she says, “and time to learn how often you should shave for your personal style.”