“I don’t think there would have been a SoulCycle if I hadn’t worked in the entertainment business,” says Julie Rice, who co-founded the indoor cycling phenomenon in 2006 after bowing out of a 20-year career as a talent manager. And not just because legions of stars are fans — though Tyler Perry says SoulCycle is “the only exercise that takes me to church while taking off the stress and the pounds,” while Kelly Rowland asserts that “once you find an instructor that you connect with — for me, that coach is Angela Davis out of Los Angeles — your physical as well as mental possibilities are endless.” Rather, Rice, the former co-CEO — she resigned last spring after an approximately $90 million payday from selling her remaining interest to Equinox (she remains on the board) — says it was her industry skills that ensured the success of her second chapter.

While working at Benny Medina’s Handprint in the aughts era of Will Smith, Jennifer Lopez and Sean Combs, Rice excelled at finding young artists, including Selma Blair, Ellen Pompeo, Josh Hopkins, Justin Long and Dash Mihok. She’s still close with Medina, who says he was “immediately impressed with her superior eye for developing new talent and material.” Says Rice: “The thrill was always in discovering and doing first deals. I’ve always loved nurturing and watching artists grow into themselves. I could not have been more passionate.”

Despite her affection for the industry, by 2002 Rice was ready to leave and head home to New York to start a family. She and her husband, Spencer, then a William Morris talent agent (clients included William Hurt, Sean Astin and Jessica Capshaw), planned to quit their jobs on the same day. Instead of resigning, she was tasked with opening Handprint’s New York office; Spencer became creative director at a N.Y. marketing agency and later CMO of SoulCycle (from which he also resigned in 2016). The couple now has two daughters, ages 11 and 6.

How a Disney Studio Chief Found Himself in a Family Vineyard

Rice’s ultimate decision to leave the business wasn’t due to dis­illusionment, but a lifestyle need. Hiking in L.A.’s canyons with friends and running on the beach was a “huge release valve” that kept her sane amid crazy hours. “Exercise could be social, communal and fun,” says Rice. “I was looking for that experience, and there was none to be found.”

While she was on maternity leave, Rice was introduced to real estate agent Elizabeth Cutler, “a super gutsy risk-taker with unbelievable entrepreneurial instincts,” she says, joking, “it was the best blind date ever [because] we had the same vision but really different skill sets.” On the back of a napkin, Rice and Cutler calculated: “If we could see 75 to 100 people a day, we could pay rent, childcare and take home a little extra money so we wouldn’t feel so bad about leaving our kids all day.”

The instantly inspired pair was off and running, settling on a spin concept (Cutler wanted cardio to take off baby weight) and divvying up responsibilities: Cutler would look for a space, Rice for towels, for the most important thing was “how we could bring pride, joy and empowerment to people in a way that felt fun, social, chic and aspirational.”

Four months later, with a small, undisclosed amount of seed money from Cutler, SoulCycle opened in an old dance studio on W. 72nd St. that they had found on Craigslist. Rice didn’t leave her job, then as a commercial agent, until a month before opening on April 15, 2006. “There’s not a person who thought this was a good idea,” says Rice, who at the time had a 5-month-old baby and admits even her parents believed it was a terrible plan. “My husband is the most supportive person in the world and was, of course, a total cheerleader, but I think even he had his doubts.”

Being the first to charge $27 per class (now $30) for a 45-minute workout that’s already included in gym memberships was a bold move. “We created a brand-new business model,” says Rice. “So we were challenged to deliver this best-in-class experience every time. We viewed it as a mini-production.” She adds, “One thing I’ve learned is people who work in the movie business do not take no for an answer. They figure out a way to make it happen. One foot in front of the other: We had three things on our to-do list every day, and the next day we would start over with three more.”

Former coworker and close friend Michael Baum — now of Impression Entertainment — says there’s a simple reason for SoulCycle’s success. “Julie has really only pursued things she is connected to and loves. This authentic connection helps fuel her daily work.” Adds Gail Berman, CEO of The Jackal Group, who says most people didn’t realize someone from the industry was behind it (Rice admits she didn’t ask for help or favors from friends in the business): “Whether she learned them in Hollywood or they were just natural, the skills that made Julie a successful talent manager were well suited to building the phenomenon that is SoulCycle.” 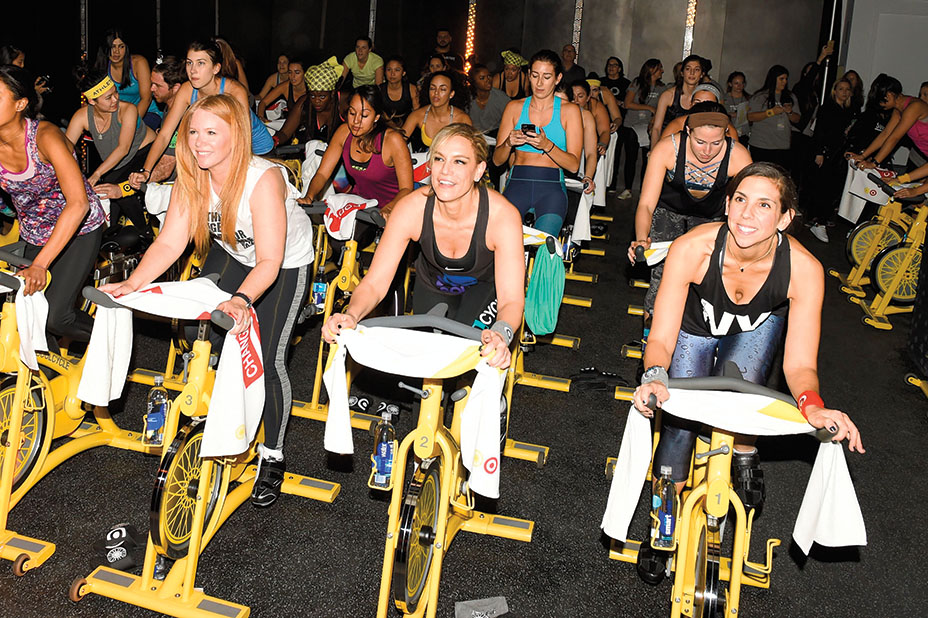 By the following fall, signups were crashing the server. “It had become a citywide destination,” says Rice. Kelly Ripa started talking about taking back-to-back “doubles,” as did Lena Dunham. Chelsea Clinton became a die-hard rider alongside Jake Gyllenhaal, Lady Gaga, Katie Holmes and Bradley Cooper. Not long ago, a West Hollywood class (the first L.A. studio opened in 2012) welcomed a then-pregnant-with-twins Beyonce and Lee Daniels; at another time, Jay-Z arrived through the back door.

Film producer Jane Rosenthal says that SoulCycle created “a unique environment that made everyone feel special. If you didn’t go to class, you had a serious case of FOMO.” Rice’s industry experience led to her cultivating instructors like talent. “I scouted them,” says Rice, looking for performers like Broadway chorus members, professional cheerleaders, dancers and actors. “We gave benefits, paid vacation and a clothing allowance, a little like the Old Hollywood studio model,” she says. Rice gave her instructors advice, looked over acting contracts and even helped some find agents: “Making sure people feel taken care of, that they’re having the opportunity to shine — it’s what I loved about being a talent manager and what I spent a lot of time doing at SoulCycle.” Berman observes that “the real alchemy was establishing a culture that turned each employee into a dedicated soldier who embraced the mission.” Rice credits Medina, who “taught me that people could be brands,” she says. “Watching him build actors in an entrepreneurial way influenced me.”

Although from the outside SoulCycle’s rise appeared meteoric, Rice doesn’t remember it that way. Her memories are of pounding the pavement, walking every avenue with a stroller begging mailmen to let her paper the mailroom, handing out branded T-shirts, pleading for magazine editor introductions. For four years, she worked behind the counter, sprayed shoes, took towels to the laundry, and checked in clients. Medina says, “Julie fully recognizes, and more importantly, she embraces, the fact there is no job too big or too small, and no detail should go overlooked when building a valuable and quality brand.”

Looking back, Rice says, the entertainment industry’s competitive nature “was not a perfect fit. More important, “in Hollywood, it was me fitting myself into the role other people created. But this was a much more authentic expression of who I am, and there is such joy in seeing an idea from seed to fruition.” As an entrepreneur, she touched upon every aspect of the experience and enjoyed creative control. “That’s one of the things that can be really frustrating in the entertainment business as a manager: You don’t write the script or make casting choices or take charge of the final product.”

In 2011, with eight studios, Rice and Cutler sold a majority share of the company for an undisclosed price to Equinox to ensure they could scale the business. In 2016, they sold the remainder “because it felt like the right time” and resigned, says Rice. (Equinox is currently waiting to go forward with an IPO that’s been delayed.)

Rice, her husband and Cutler are now partners in LifeShop, which “invests in and advises other entrepreneurs and creates concepts of our own in the wellness space,” she says. Unlike when she was the CEO of a company with 2,000-plus employees and 75 studios, she spends her days in think-tank mode brainstorming with a small group of creatives. “It’s incredible to have a blank canvas to start all over again. It definitely feels more daunting the second time around.”