Five years ago, while tending to the complexion of Barbra Streisand, veteran esthetician Angela Caglia was posed a question by the mega star. “[She] asked me what my dream was, to which I replied, ‘starting my own skincare line,'” says Caglia. “That was the real catalyst.”

This fall, that dream became reality in the form of Caglia’s five-piece eco-luxe namesake brand, which draws from the facialist’s 20 years of experience in the industry.

It follows on the heels of last year’s by-appointment-only 800-square-foot Angela Caglia Skin Spa at the Glen Centre above the hills of Bel-Air, where pictures of Caglia’s inspiring friends and clients — including Streisand — adorn the pink-colored walls.

“I listened to my clients’ needs and their concerns — I knew a lot about ingredients and what effect they had on the skin,” says Caglia, who garnered a fan base working at The Spa at Equinox West Hollywood and then Ole Henriksen Face & Body Spa on Sunset, before striking out on her own. “I kept getting in trouble at those spas, though, because I wanted to create my own facial protocols. I started experimenting and innovating and gained my own loyal clientele.”

It’s a starry list that includes longtime fans Helena Christensen and Minnie Driver, as well as producer David Foster, who gave her the nickname “Hollywood Glow Girl” —  a tribute to “the immediate glow David and his other musician friends experienced after my facials instead of the traditional red, sensitized face,” says California-born and -raised Caglia. 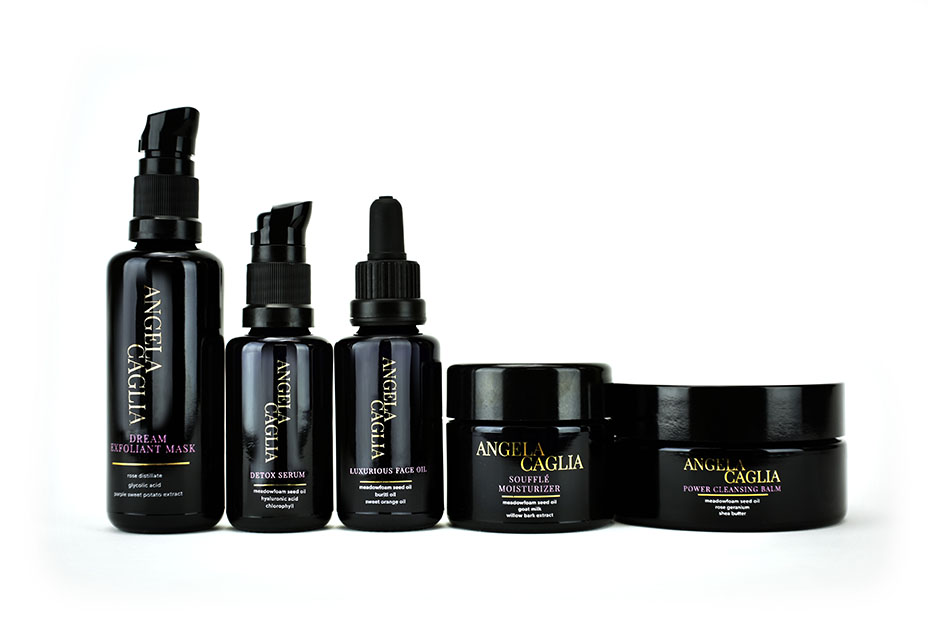 Armed with the knowledge of which products were effective or harmful for her clients’ skin, Caglia set her sights on developing her own results-oriented line with an organic skincare lab. The hero ingredient? Antioxidant-loaded meadowfoam seed oil, a sustainable oil extracted through the cold-pressing of seeds of the Limnathes alba plant and indigenous to the Pacific Northwest. selected by Caglia for its ability to deeply penetrate and sooth skin. “My clients are blown away by the results,” she says.

Products formulated around Caglia’s “skin-saving wonder oil” include the brand’s anti-aging Luxurious Face Oil ($120), and the skin-plumping Souffle Moisturizer ($85), which also functions as an eye cream and a lip mask. A brightening Dream Exfoliant Mask ($85), hydrating Power Cleansing Balm ($85) and purifying Detox Serum ($85) round out the elegantly packaged collection, which is pH balanced and formulated for sensitive skin.

“It’s not a complicated line. I like a simple routine, and I don’t believe in using a lot of products,” Caglia says.

“My favorite aspect of my job is connecting with people and building friendships, along with the immediate satisfaction of seeing how happy they are after my treatments when they look in the mirror,” Caglia says. Plus, “it’s an energy that happens when hands touch a face for an hour. There has to be a soothing, calming connection.”

The Clean Beauty Line That Counts Aubrey Plaza as a Fan