Set in the 1960s, the TNT series I Am the Night, starring Chris Pine and India Eisley, is based on the life of Fauna Hodel, the daughter of Dr. George Hodel, who was linked to the infamous, unsolved 1947 “Black Dahlia” murder in Hollywood of aspiring actress Elizabeth Short. While Fauna Hodel passed away in 2017 before filming started, executive producer Patty Jenkins befriended her daughters Yvette Gentile and Rasha Pecoraro, who were often on set and helped costume designer Rhona Meyers with some of the wardrobing. (The half-sisters have additionally created an eight-part docuseries, Root of Evil: The True Story of the Hodel Family and the Black Dahlia, as a companion podcast to the TNT show that dives into the Hodel family history.)

“We were so lucky to have them; they filled in the gaps,” Meyers told The Hollywood Reporter, explaining that the wardrobing spans from the 1940s to the 1960s. “They talked to me a lot about Fauna’s and Tamar’s personalities and gave me pictures. Fauna was really open and loving and took everyone in, while Tamar was super manipulative and always got what she wanted, even when they sent her away to a convent. Apparently, she was a Hollywood girl who was best friends with Michelle Philips.”

The journey starts in Sparks, Nevada, where Hodel (Eisley) was raised by an adoptive mother, and moves to Los Angeles during the 1965 Watts riots as she searches for her birth mother. Hodel’s look likewise evolves from innocence to experience, starting with “prim and modest” 1950s-inspired full skirts and cardigans and T-strap shoes in a palette of red, white and blue (that signify how the smaller town is a bit behind the times) to 1960s turtlenecks, jumpers and drop-waist dresses in olive, rust and black in Los Angeles that are still demure but a bit more sophisticated.

Meyers said there were some strange coincidences. “I felt so strongly that Fauna had to have this particular red coat that I found,” she told THR. “Then one day on set, Yvette started talking about how she was three years old, staying in Sparks with Jimmi Lee [Fauna’s adoptive mother, played by Golden Brooks], who was drunk and yelling at her and kicked her out of the house [mirroring the scene in the series, before Fauna leaves for L.A. in her red coat], and she said: ‘I picked up my red coat and I felt like Little Red Riding Hood, and I didn’t know where I was going. I was by myself walking down the street and I just kept walking and walking, and I was lost and scared, and I accidentally walked by my godmother’s house and she saw the red coat!’ It was bizarre because the red coat I got for Fauna also had a hood, but we took the hood off.” 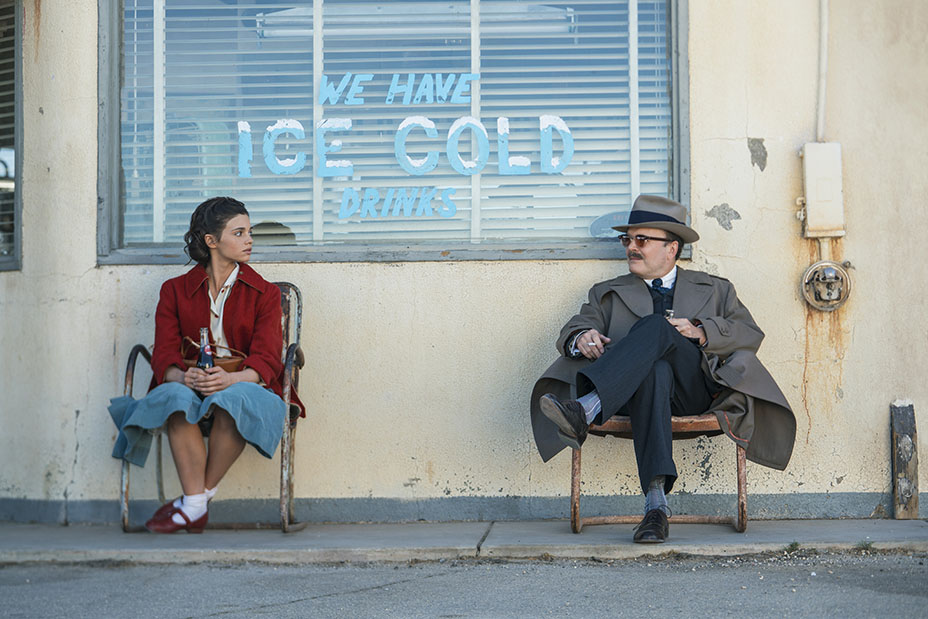 The cherry-red T-strap shoes that Meyers had custom made were written into the script and featured prominently in publicity shots, and they also ended up having unperceived personal significance. “Yvette told me that Fauna’s favorite movie was The Wizard of Oz because she never knew who her parents were and felt out of place, like she didn’t belong, so Yvette said that she would always click her shoes and say, ‘There’s no place like home.’”

George Hodel’s (Jefferson Mays) sinister nature was communicated in subtle ways through wardrobing. “The palette for all the bad guys was cool colors, gray, black and navy, and he wore pristine three-piece suits with little accoutrement and strange cap-toe shoes that are a little creepy, so he had that ‘light in the loafers’ kind of feeling,” said Meyers. “He was pristine in a way that was totally guarded because he holds it inside. Everything felt very clinical about George and his upbringing. There were pictures and he wore a World War I or II trench, so I got one that felt a little more confined or militant. He was a little less done up in real life.” 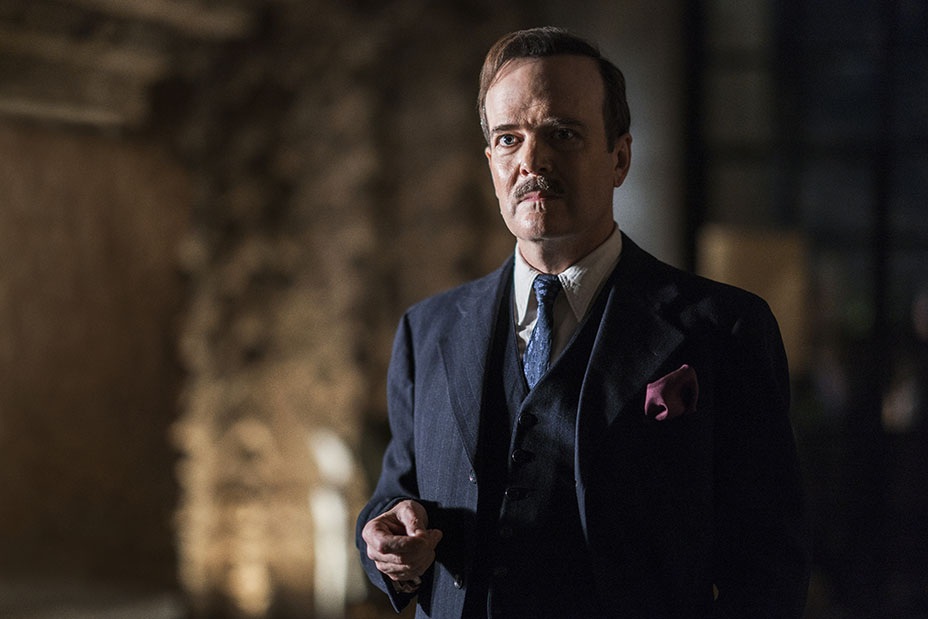 “I don’t know if it’s true, but I just decided that he was masonic because he was so protected and doing all this ritualistic stuff,” she continued. “It was weird because we found a box of jewelry for sale online with the initial H on tie bars and masonic rings and cuff links, so we bought it and used it, almost like the ghost of George Hodel put that in our path.”

In the TNT series, George Hodel’s ex-wife Corinna (Connie Nielsen) is based on Dorothy Huston Hodel, George’s second wife and the ex-wife of John Huston, Meyers said: “She is very posh and lavish. She’s a performing artist and art collector in her own right, with a huge Chinese art collection. I saw pictures of her and she wore very surrealistic clothes, so I was inspired a lot by [Italian fashion designer Elsa] Schiaparelli and actress Anna May Wong because there was a lot of chinoiserie around her — she had fabulous silky chinoiserie lounging outfits, including a colorful kimono robe from Palace Costume in L.A. The idea for the Hodel clan from Patty was to keep them in the glamorous ‘40s, because that was the highlight of their life.”

“Corinna is also modern — sort of Beat poet meets Jackie O. meets Audrey Hepburn — so when we see her in the daytime, she’ll be in a boxy Jackie O. jacket with a turtleneck and a little beret and tuxedo capris. There’s a ‘happening’ scene coming up where she’s performing and scissors are thrown on the floor, and the group actually cuts her dress. We made the dress, based on a ‘40s dress, but we put a train on it and had it ombre dyed and then beaded the arms so it was completely different. We had to make four of them and they cost $3,500 to $4000 apiece! And I put three keyholes in front so people could cut through them.”

Chris Pine plays fictional reporter Jay Singletary, who had a lead on a case against Hodel’s illegal abortion clinic as a young up-and-coming reporter at the Los Angeles Times but was then blacklisted after Hodel was acquitted and is on a downward spiral that’s captured in his clothing. 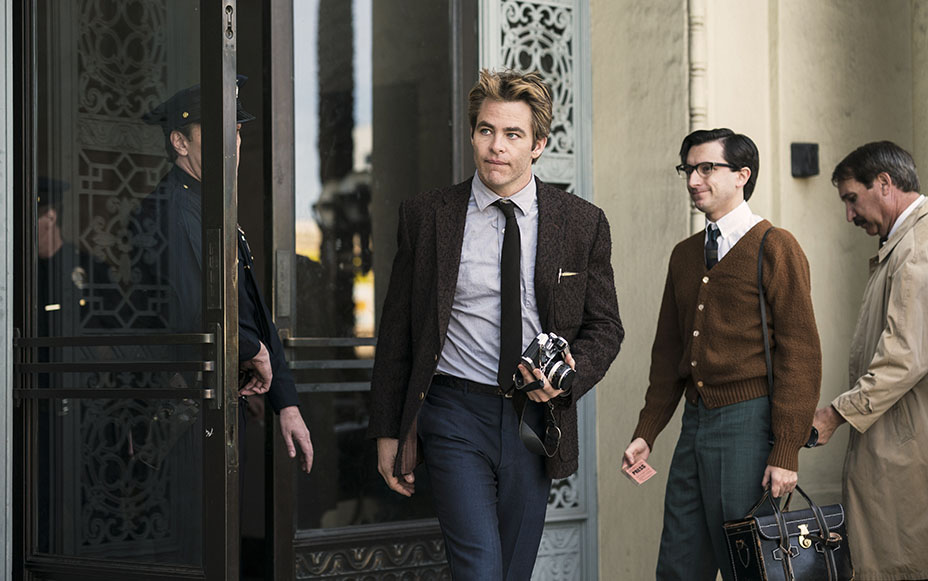 “He lived in a little hovel and slept in his clothes and wore them over and over again, except we had to keep making them in multiples of five because they got ruined in fights, covered with fake blood, so we couldn’t reuse them!” said Meyers. “He’s in browns and dirty-creamy gray and blue shirts. I tried to make everything look a little dirty and wrinkly and unkempt, nothing bright and happy. His look was based on James Dean, Paul Newman, Bob Dylan and Clint Eastwood in the ‘50s and ‘60s.”

“The staple was a nubby brown-and-black blazer that he wore almost all the time, and he had a couple ’60s-style suits,” she said. “We shortened the pants so he could do the Paul Newman short pants kind of vibe with ‘60s gym shoe deck shoes. He also had a ‘60s windbreaker and a Hawaiian shirt with a Mayan calendar print that he loved.”

About 40 percent of all the clothes were custom made, Meyers noted.

“It allowed me to be creative and do a great period piece that tells a complex but true story of an amazing woman,” she said. “And what I love most is the moment when I can help make the actor feel like they’re in the skin of the character they’re supposed to portray. You can just tell by their body language.”

'I Am the Night': TV Review