Fans of Game of Thrones may still be engaged in heated debate over whether Daenerys Targaryen’s (Emilia Clarke) turn to the dark side was sufficiently foreshadowed, but there is one person to whom the Mother of Dragons’ return to her Targaryen roots is clear as day. “It’s somewhere I wouldn’t have predicted her going but it was amazing to see how easily it seemed to develop out of the direction that her costumes had been heading,” says costume designer Michele Clapton.

From the time Daenerys had escaped her brother’s dominance in season one, Clapton says the character was constantly adapting her looks from those around her. “She first adopted the Dothraki blue as her color and the leather trousers and boots inspired by Khal Drogo, which gave agility and strength,” she says. But it wasn’t until Mereen that Dany started to develop her own looks. “We see her costumes vary more from scene to scene to reflect her emotions,” says Clapton. As the character comes into her own, her wardrobe starts to reflect her origins. “As winter comes, the silhouette of the costumes and the colors start to move toward that which we associate with the Targaryens,” says Clapton. In “The Bells,” the penultimate episode of the HBO series, Daenerys is visually defined as a Targaryen in the house colors and silhouette of her brother, as she torches King’s Landing. Says the designer, “It was an epic journey, costume-wise, to get there.” 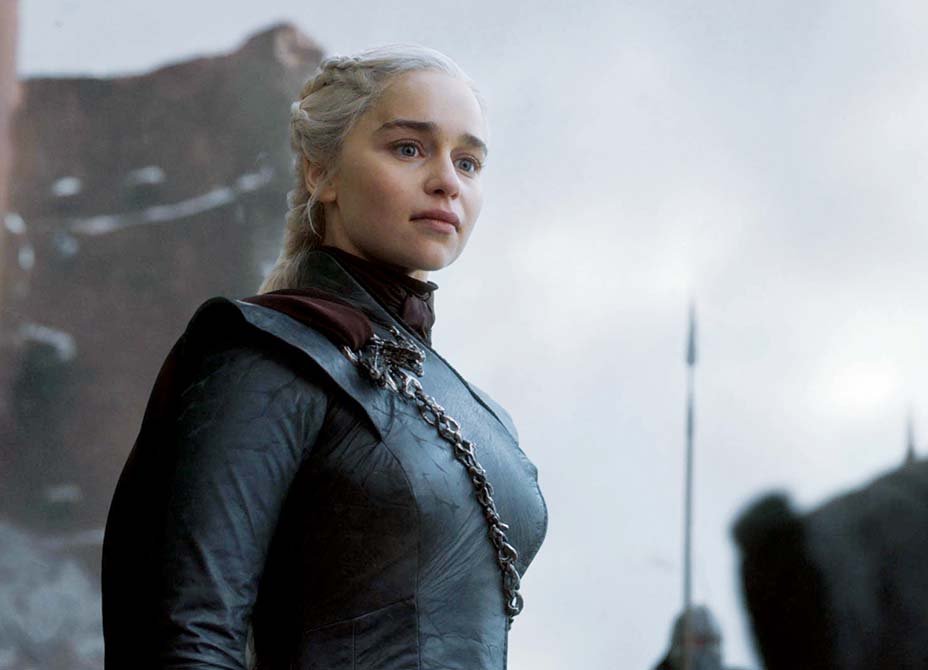 Hulu’s The Handmaid’s Tale saw another costume-aided arc: Cape-clad June (Elisabeth Moss) may not be able to express her character development through her outfits, but in flashbacks to a time when she still had a closet full of clothes, costume designer Ane Crabtree was able to contrast the personalities of June and her mother through their choice of apparel. “Cherry Jones plays this hardcore Doctor Without Borders feminist who wears hiking boots, jeans and sweatshirts, and I said, ‘Maybe June is the polar opposite from her parent, and chooses to like clothes and to be feminine,’ ” explains Crabtree.

While these pre-Gilead scenes are designed to quickly establish the relationship between two characters, Crabtree has been telling a long-form arc in the present through the evolution of Serena Waterford (Yvonne Strahovski). “I knew that Serena Joy would start to gain power,” says Crabtree, who began to structure the commanders’ wives’ dresses with a more militaristic look. “There were very subtle shadows of that in the necklines and shoulders,” says Crabtree. “They became like strong buildings.”

Alongside Serena’s quest to regain some of her power, the character also was embarking on motherhood. Crabtree determined that, even though Serena was not the one carrying the child, the character would mirror June’s pregnancy through her clothing. “When a woman is pregnant, she’s always touching her belly, so I started putting focus on belts, or certain empire waists to suggest that she’s thinking of being with child, even though it’s metaphorical,” says Crabtree.

Using clothes to express a character’s identity can be key, especially when there are signs of a crisis. In season two of Amazon’s The Marvelous Mrs. Maisel, costume designer Donna Zakowska transported two of the main characters back to simpler times without saying a word. As the Weissman family travels to the Catskills, Zakowska juxtaposes Midge’s (Rachel Brosnahan) now-famous onstage uniform, the ultimate black cocktail dress, with playful dresses made from lightweight fabrics and featuring color, flowers and patterns. “It was a little bit of an escape from what she knew was the inevitable path to her life,” says the costume designer. “For Midge, it was the last time in which she was able to be with her parents, dealing with them as a child. It’s the opposite of where she is going.” 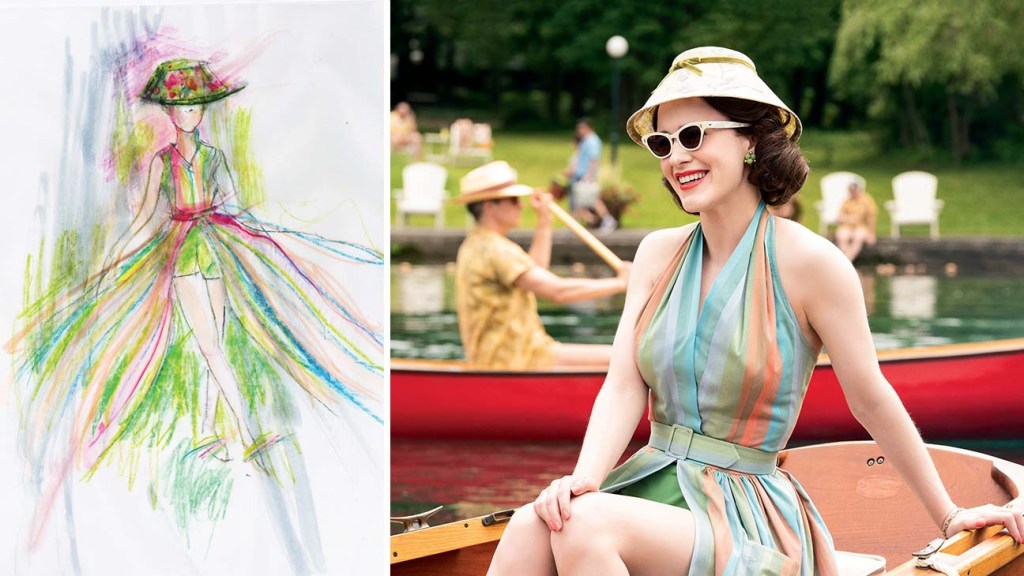 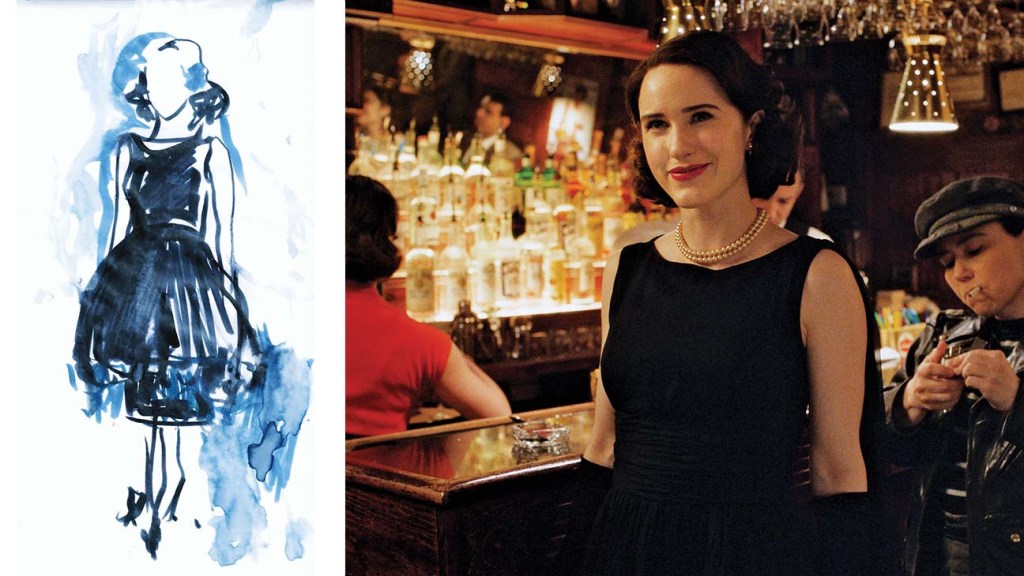 Also reflecting on where life has taken her is Midge’s mother Rose (Marin Hinkle), who runs away to Paris, where the character spent time in her youth. Zakowska used deep purples and reds, putting Rose in simple jumpers but also a standout purple coat that she based on a well-known Dior design. “There’s something very schoolgirl about [her wardrobe], in a sophisticated way,” says Zakowska. “It was connecting back to her youth, that feeling when you’re not set in your ways. As people get older they decide, ‘This is who I am,’ and her being in Europe opens up her idea of who she was.”

How a character dresses can also reflect his or her sense of self. On Netflix’s GLOW, the costumes that stand out are, of course, the glorious ladies’ skimpy wrestling gear — but there is another narrative about gaining strength that plays out outside of the ring. “Debbie [Betty Gilpin] is coming from a personal tragedy of her best friend sleeping with her husband, having a new baby and getting divorced,” says designer Beth Morgan. She expresses Debbie’s emotional struggle through her wardrobe choices in and out of the home. “In season two, when she’s selling all her furniture and is drunk and forgets to pick up her kid, she’s in no bra and leggings, a short tank top and an oversized men’s sweater. It’s just disheveled,” says Morgan. “There is the element to Debbie’s character that has that ‘everything is fine’ front, but once we see her at home she can really fall apart.” 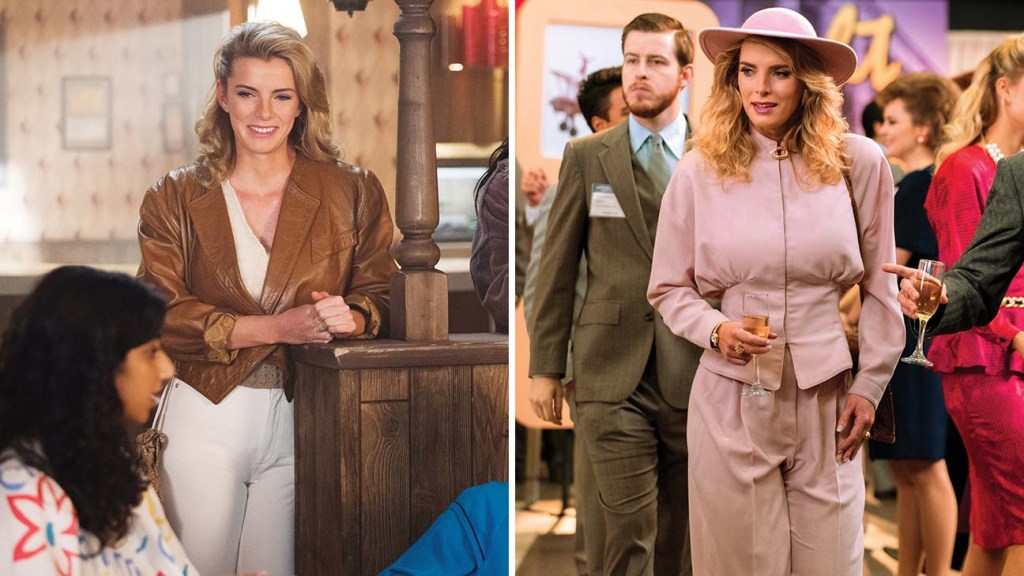 Even when she pulls herself together, Debbie’s road to power player is a winding one. “In one of the earlier episodes where they’re going to pitch the show to the network executives, she has on a very tight suede pencil skirt that has fringe and a tight sweater. She’s still, at that point, using her body,” says Morgan. “We wanted her to have an evolution where she understands she has more to offer than her looks, and that she can accomplish things with her business savvy.” When Debbie finds her mojo, out comes the one-color power pantsuit with shoes in the same color and a hat dyed to match. “It’s more covered up,” says Morgan of Debbie’s new style. “She’s understanding how to use her body in a different way.”

Designing for a particular time period poses its own challenges. For FX’s Pose, designers Lou Eyrich and Analucia McGorty were tasked with replicating the LGBTQ and gender-nonconforming ballroom culture in 1980s New York City, not only making it historically accurate, but also establishing the different socio-economics of this world. Nowhere was that financial roller coaster as evident as in Elektra’s (Dominique Jackson) first-season arc, where, after being rejected by her sugar daddy following her gender confirmation surgery, she ends up on the street and has to relearn how to dress without a budget. “We went from dressing her in fabulous matching outfits and rich fabrics to sad blouses, pants and skirts,” says Eyrich. “We really needed to see her heartbreak.” Calling the first season “thrift store chic,” the two were forced to be as inventive as the characters they were dressing, focusing on “how they would be finding things at the Salvation Army and manipulating them to feel cool and showstopping at the ball,” says McGorty. While their Emmy nom is validating, Eyrich and McGorty cherish the thumbs up they received from a different set of experts. “When our consultants came in for the first ball — people who were part of the ball community in New York during that year — and said, ‘Oh, my God, this feels just like it!’ it was glorious,” says McGorty. “To tell this story with our art and get to honor them feels really good.” 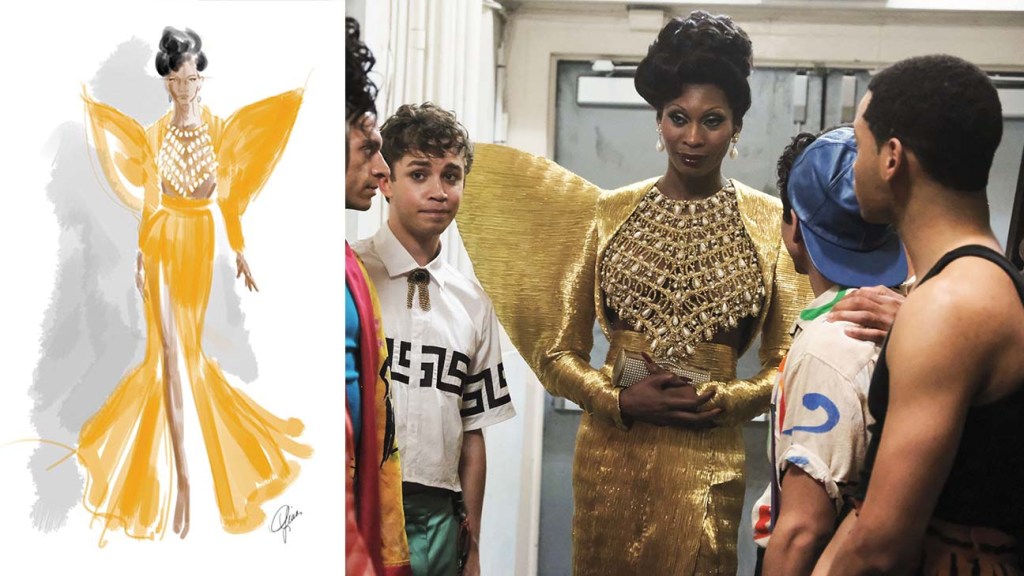