Continue to The Hollywood Reporter SKIP AD
You will be redirected back to your article in seconds
Skip to main content
June 20, 2018 1:26pm

Ibiza has been attracting Hollywood elites, rock legends, and European cognoscenti in search of haute hedonism since the 70’s. But these days, stars are coming to Spain’s White Island not just for nonstop parties, mega yachts and seen-and-be-seen beach clubs, but also for hidden countryside fincas, secret beaches and in-the-know restaurants.

“Most of our celebrity clientele don’t even want to set foot in a club,” says Serena Cook of Deliciously Sorted, the island’s premier concierge and event company, whose clients include Michael Fassbender, the Kardashian/Wests, the Clooneys and Roger Federer. “They are coming to experience the real Ibiza, and to avoid the paparazzi and maddening club crowds.” According to Cook, doing Ibiza the celebrity-endorsed way means embracing the wilder (as in wilderness) side of the island, traveling down unmarked beach roads and heading inland to its smaller towns, where everybody will eventually know your name, whether or not you’re famous.

A post shared by Deliciously Sorted Ibiza (@deliciouslysortedibiza) on Oct 29, 2017 at 11:38am PDT

Last summer’s biggest celebrity wedding was also one of the quietest, thanks in part to the out-of-the-way location. Tomb Raider Alicia Vikander wed her X-Men amore Michael Fassbender at La Granja, a members-only club-meets-farm-meets restaurant. The affair was also attended by director Steve McQueen who worked with Fassbinder on 12 Years a Slave. The intimate farmstead, developed from a 200 year-old finca, features an onsite farm, restaurant and pool available exclusively to members and guests. With just nine suites and a two bedroom guest house, the property is known for attracting design-driven clientele and those looking for a quieter Ibizan holiday.

While on the island for their nuptials Fassbender and Vikander also chose the sophisticated and quiet beachside restaurant of Es Xarcu for a late afternoon lunch. The waterside restaurant, accessible only via a dusty, steep dirt road or via boat (the preferred choice of the newlyweds) is one of the island’s best in-the-know eateries. The traditional restaurant specializing in fresh fish cooked in salt caters to the local elite who are also looking to avoid crowds.

Nearby, the pebbled beach of Es Torrent and its namesake restaurant, Es Torrent, has also seen its fair share of A-listers. It was this seafood-centric spot that the Clooneys visited while on break from spending time in Lake Como last summer. George and Amal chose this remote location that is half beach bar, half high-end restaurant for its boho bliss vibes and had a quiet dinner with Rande Gerber and Cindy Crawford the night before the Casamigos Tequlia launch party at Ushuaia. Roger Federer also visited this seaside location for a lunch with friends while on the island to celebrate his wife’s 40th birthday last month.

Those looking for a slightly more central, but equally as exclusive experience have been heading to the year-old Nobu Hotel Ibiza Bay property on the shores of Talamanca Bay. The 5-star hotel had its official ribbon cutting last month, which was overseen by Robert De Niro and his partner in Nobu Hospitality chef Nobu Matsuhisha. The 152-room hotel (rooms start at $550) is enticing other high profile clientele with top notch amenities like a Six Senses Spa and a pop up salon from Julia Roberts’ and Kate Winslet’s main mane-tamer John Freida, not to mention the namesake Japanese restaurant which started it all. 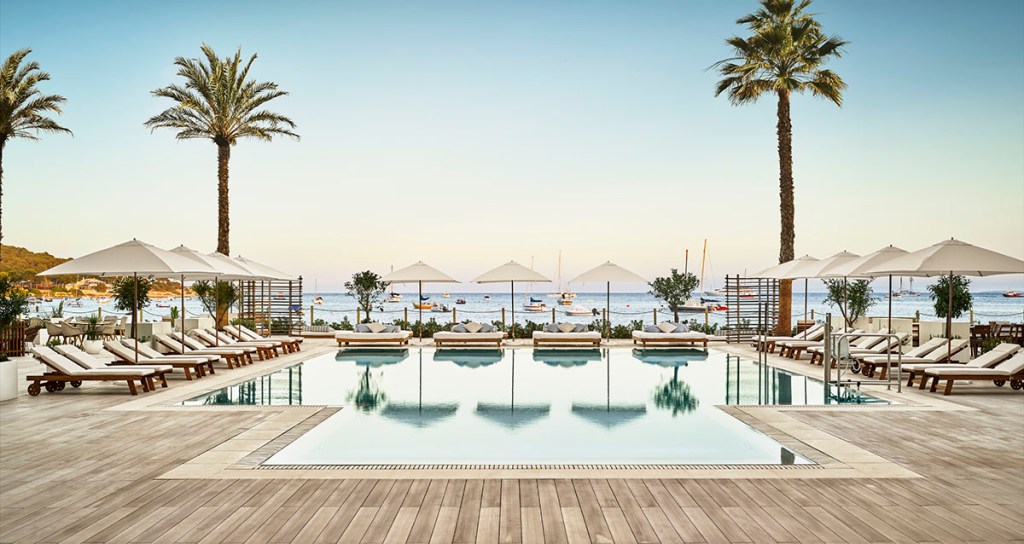 Another northern island favorite, known for its contemporary takes on classic Japanese food is Nagai. Located in a converted finca, the popular restaurant attracts locals as well as Westworld’s Thandie Newtown who, despite her infamous Twitter fight with British Airways on the way back from her last holiday, can often be found here with her family. 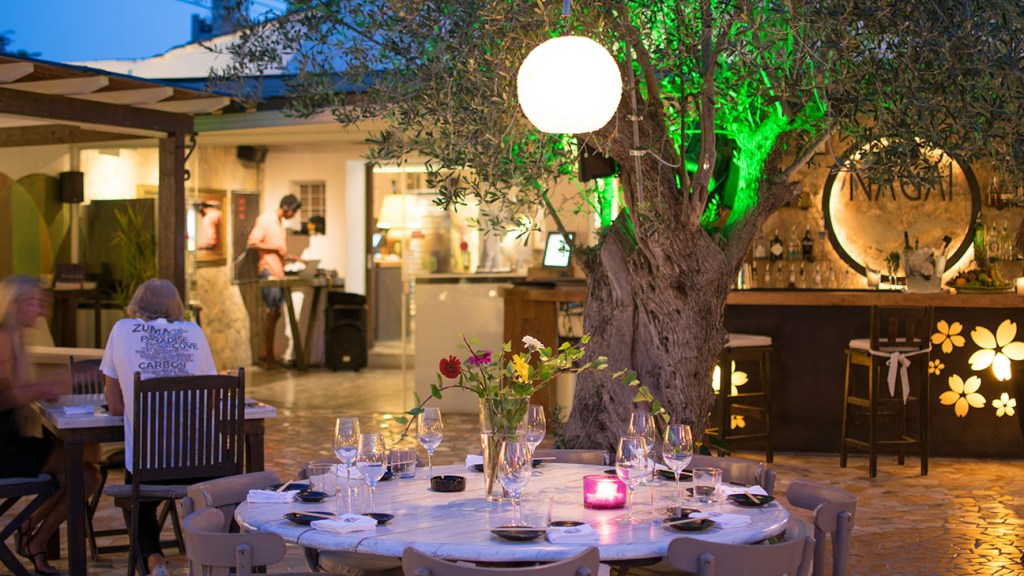 Just-opened this summer and destined to become a top table is Bottega il Buco, a new restaurant from the perennially packed and celebrity-filled New York hot spot il Buco. The Manhattan location, known for regulars that range from Taylor Swift to artist Chuck Close, is starting the season as an under-the-radar locals haunt in the haute town of Santa Gertrudis. But given it’s A-list pedigree, it will likely become the place to be seen by the end of the summer, especially for those who don’t want to be seen. 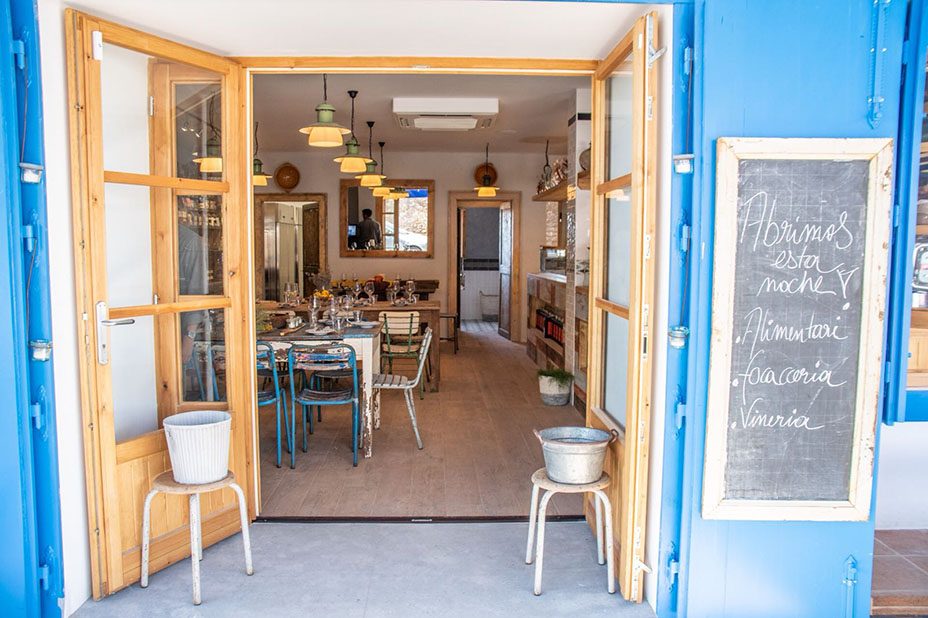 One of the most well known places on the island for celebrities is actually cruising around its crystal blue waters on a private boat (and hopping over to neighboring island Formentera like Giorgio Armani, Eva Longoria and Jennifer Connelly). Octopussy Boats is a new company recently launched by island local and celebrity boat booker Elvira Bruns. Her island knowledge along with her background overseeing the talent transportation for the EMAs (Electronic Music Awards) for many years makes her the go-to for bands like Fischerspooner and other top DJs and musicians when they come to town.

Moving up and down, Side to side like a rollercoaster with @IdrisElba. STUDIO 7 / EVERY SUNDAY #LiveLio

And while most high-profile visitors are trading the dance floor for downtime, Idris Elba is on the White Island for both. Hot off his DJ set at the Royal Wedding, the Luther star, who is currently filming Season 5 of the British crime drama, can be spotted spinning at Lio nightclub every Sunday for a summer-long residency.