Trip Haenisch is the latest Hollywood design star to emerge with a new book, Personal Space, published by Rizzoli, sharing his personal take on how to decorate with color, use “furniture as art” and make homes look “collected” with personal pieces, but not “like somebody’s grandmother lives there,” he says.

Haenisch, who has ranked in The Hollywood Reporter’s Top Interior Designers list, offers photos of his past work in Personal Space, with a forward by Courteney Cox (other clients include Laura Dern, Hank Azaria and WME co-CEO Patrick Whitesell).

THR spoke to him and a few of his industry clients about recent Hollywood home projects that are sophisticated yet still kid-friendly, with lots of room for modern art to shine.

The designer took on the 7,600 square-foot Pacific Palisades house of Erik Feig and Susanna Felleman, founder of Picturestart and svp business affairs at HBO, respectively, to give the Cape Cod-style home some personality with modern color.

“We entertain a lot and there is usually a giant logjam at the bar, of course,” Feig and Felleman say of their seven-bed, eight-bath home. “The first thing people comment on is the color. It feels lively and alive. We love when they say, ‘Your house is so chic but also so welcoming.’ That is what we told Trip we wanted when we first met and like clockwork, we hear it at every gathering.”

Haenisch added a playful blue runner in the entryway, orange wallpaper in the television room and an indigo bar that spreads cheer through the space from kitchen to family room. 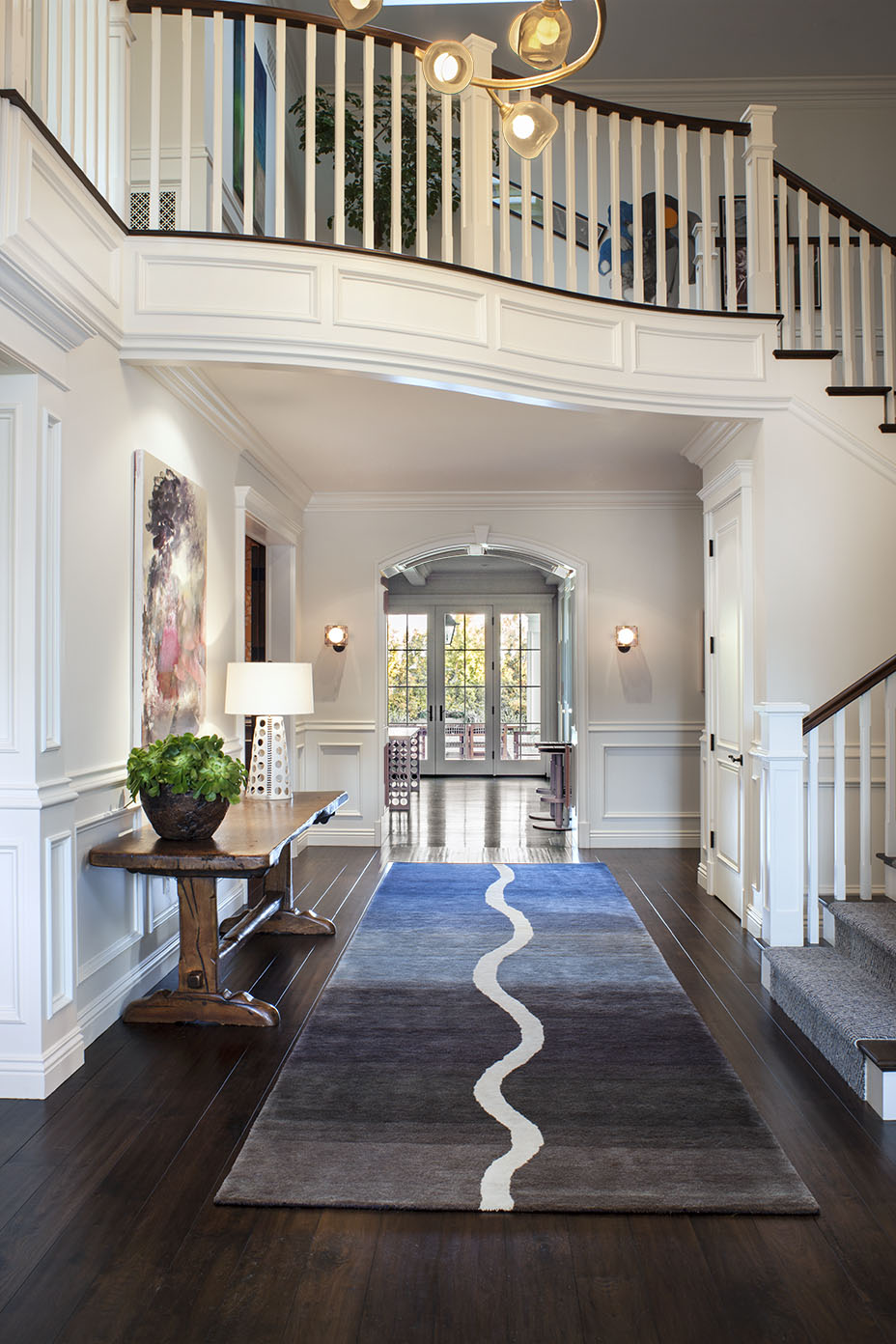 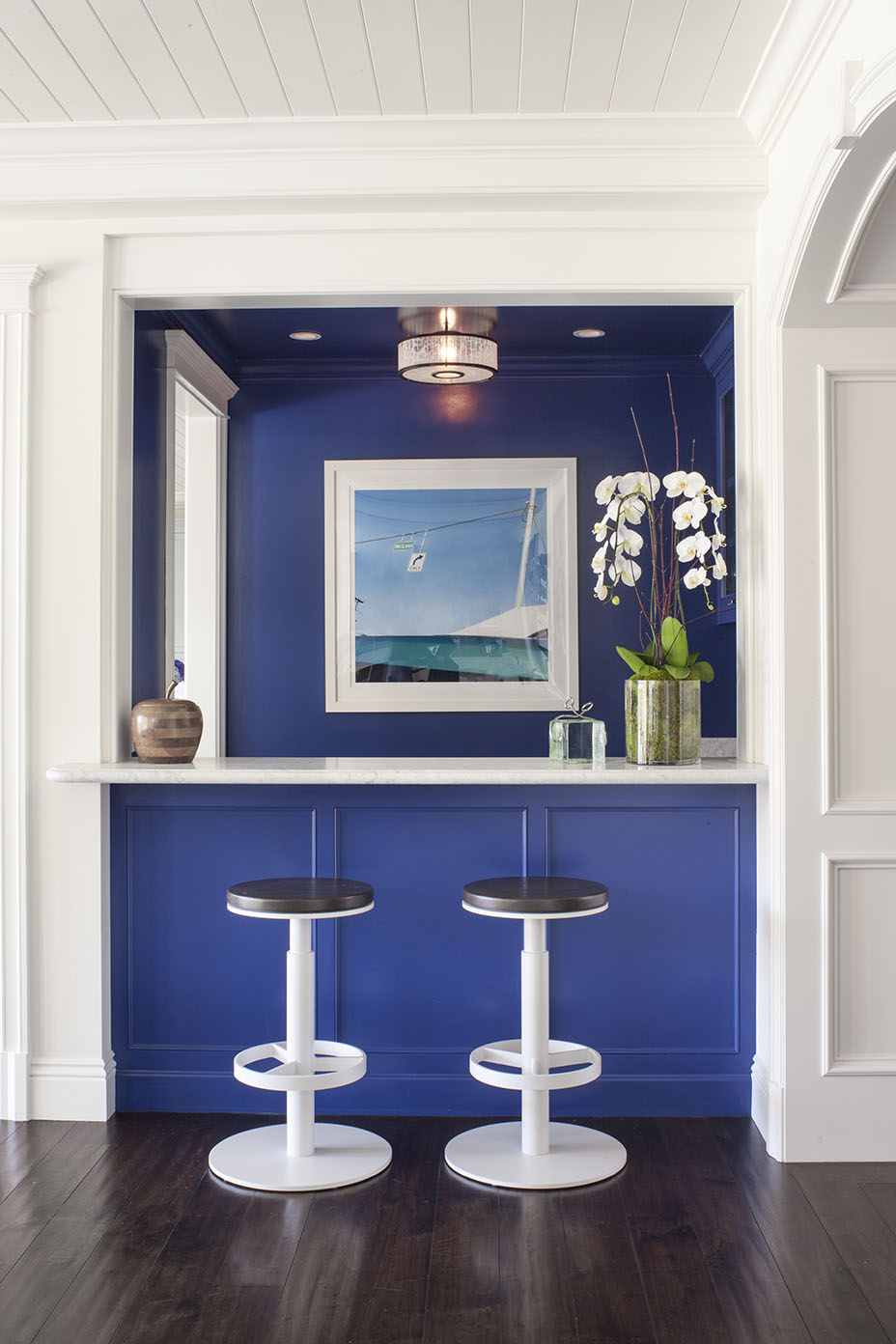 Haenisch says one of the things the couple was interested in was “showing off their growing art collection,” including works by Ellsworth Kelly, Nick Muniz, Louise Bonnet, Teresita Fernandez and Friedrich Kunath. The gray living room features a Chuck Close painting, alongside platinum chairs and a Keegan sofa. He purchased lighting from Obsolete, an art gallery in Culver City, and pieces from Lee Stanton Antiques and Hollywood and Home (though he nabbed Louis Poulsen pendants for the kitchen island at an auction).

“I also like the idea of furniture as art,” adds the designer, who made a custom dining-room table with a wood base and made-in-Italy mosaic fabric pattern.

Previously president for production and acquisitions at Summit Entertainment, Feig says his favorite room is the library and his favorite piece of furniture is a small leather chair. “It was rejected by another client, but Trip knew we would love it,” he says. Felleman loves the family room and living room — where she spends time “looking around at the special pieces we have collected and pinching myself that this is where we live.” 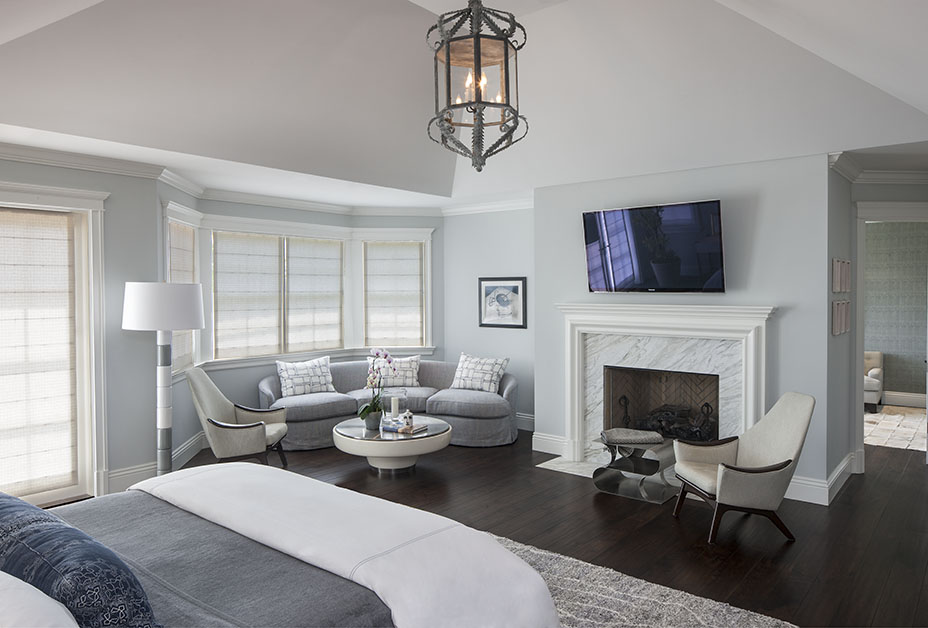 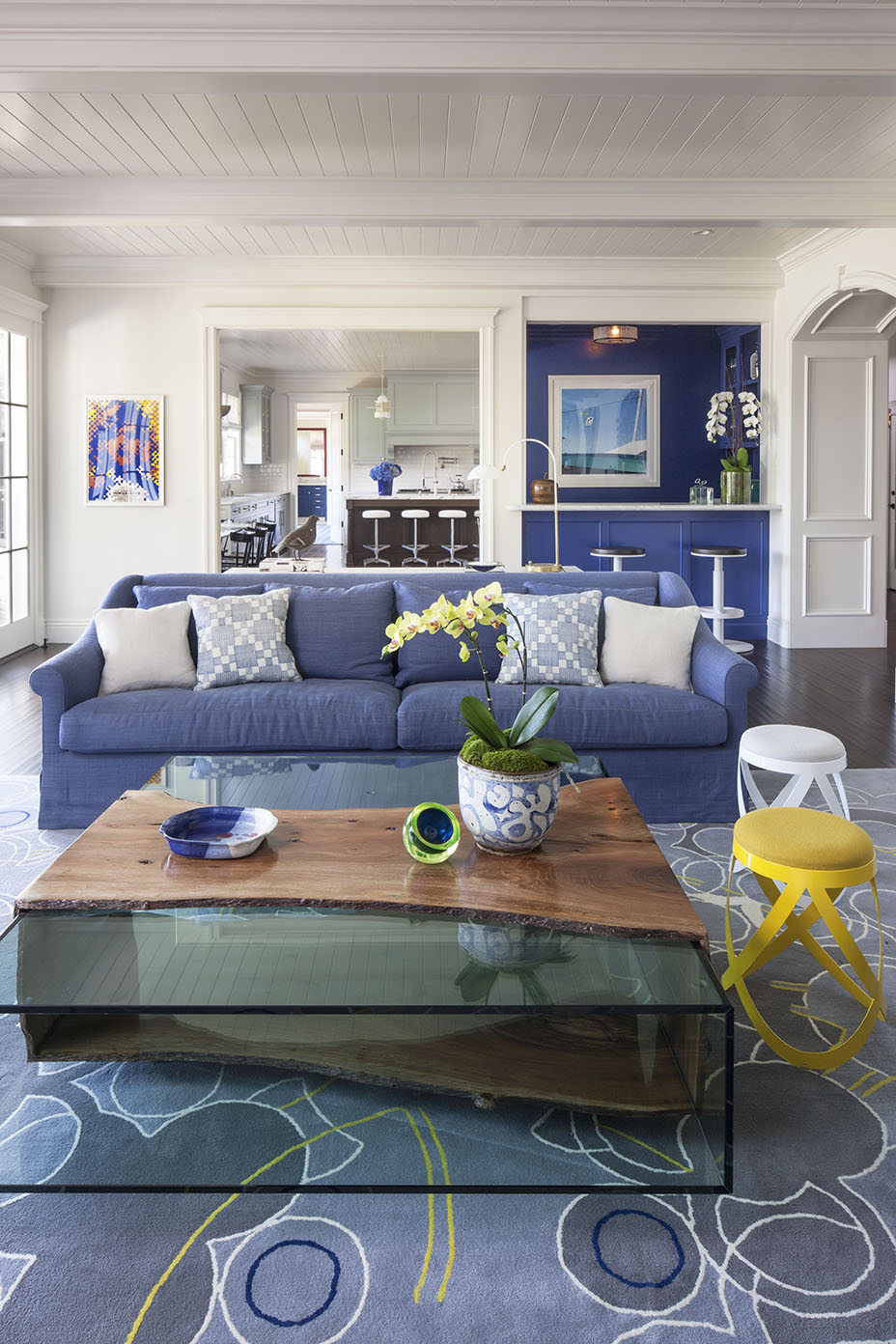 Since she was a little girl in Okmulgee, Oklahoma, Shannon dreamed of a white brick house with black shutters, Haenisch says. For the interior, she liked lemon yellow, so the designer used the vibrant hue throughout, including a bright door that goes to the powder room — “It makes her happy.”

“Guests always comment on the great pop of color,” adds Shannon, who worked as a program director in CAA’s philanthropic division for six years.

Shannon also adores the yellow lucite Alexandra Von Furstenberg game table in their formal living room. “It was Michael’s idea to get a game table,” she says of her husband, producer of Silicon Valley, American Vandal and It’s Always Sunny in Philadelphia. “Again, that yellow was the pop of color that Trip thought would be the perfect touch and lucite provided that balance to make our home not too traditional.” 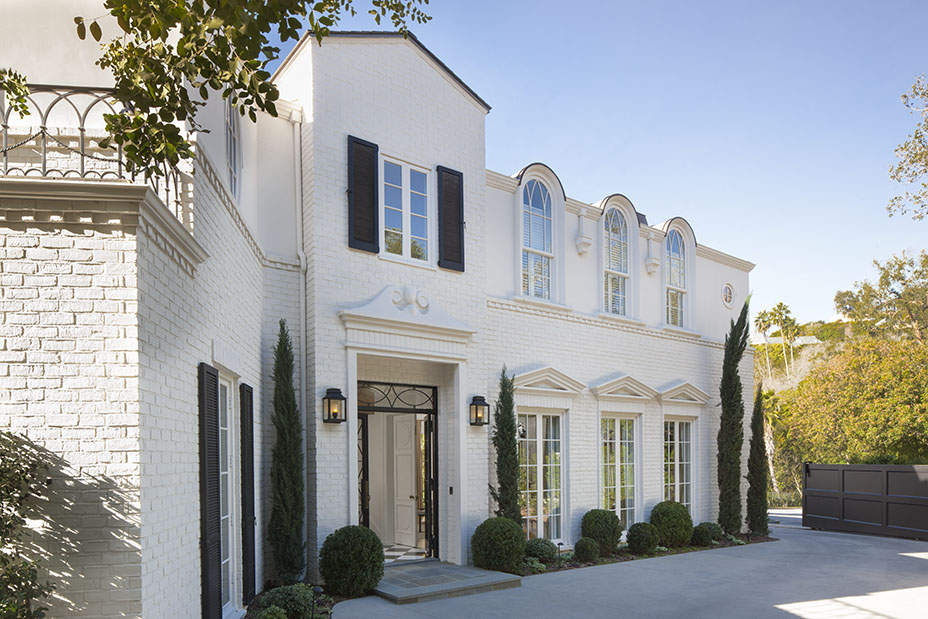 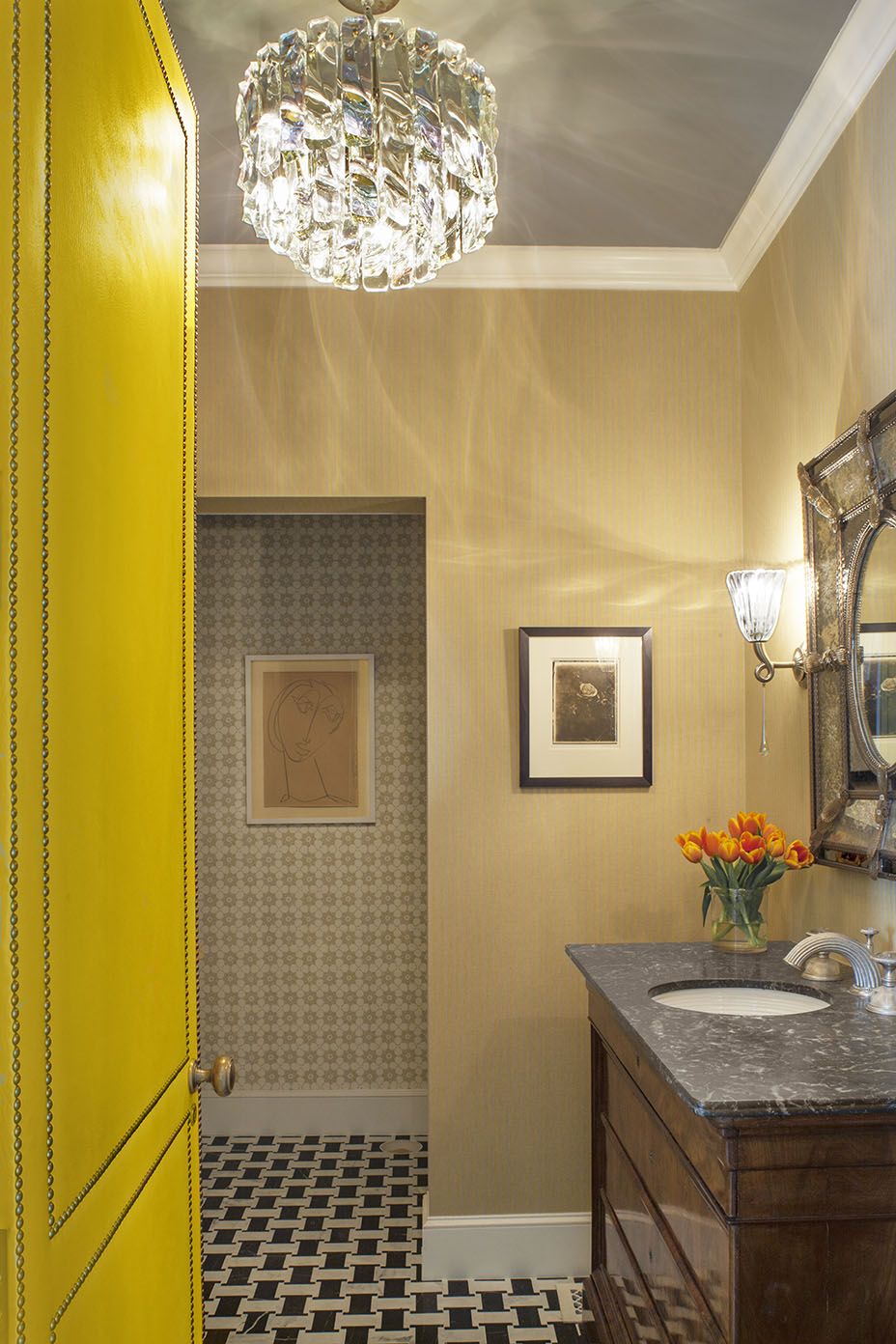 The master bedroom is a “soothing” lavender and gray palette. Haenisch found pictures of paneling from an old Paul Williams house, and re-created it for the couple, Shannon says. “It added character and warmth to the room. We also love the light fixtures; Trip is truly a genius at picking out the most amazing light fixtures that are special and these make such a statement when you walk into the room. He balanced it out with a Christian Liaigre bed that we love and is a piece we will have forever. We loved how Trip mixes traditional, the paneling, with pops of contemporary furniture like the Liaigre bed.”

Shannon wanted to do a red-and-white polka dot wallpaper in their eldest son’s room “because we are Oklahoma Sooner fans,” but Haenisch suggested they only cover the back wall. “The result really made the room pop without overdoing it,” Shannon adds.

At auction, they found crystal sconces and Biedermeier furniture, pairing the latter with an egg chair and Joe Colombo bar stool grouped around the piano in the living room. A Swedish rug adds to the mix, while a pair of George Smith chairs compliments a Nakashima table.

Haenisch likes the kitchen’s focus on comfort, with a window seat where you can sit and watch TV. Vintage lights from San Francisco furnishing shop Coup D’Etat hang nearby. The family included some picture frames in the bedroom with kids’ photos (Haenisch very much discourages the clutter of having picture frames on the piano: “All I see is a headache.”) 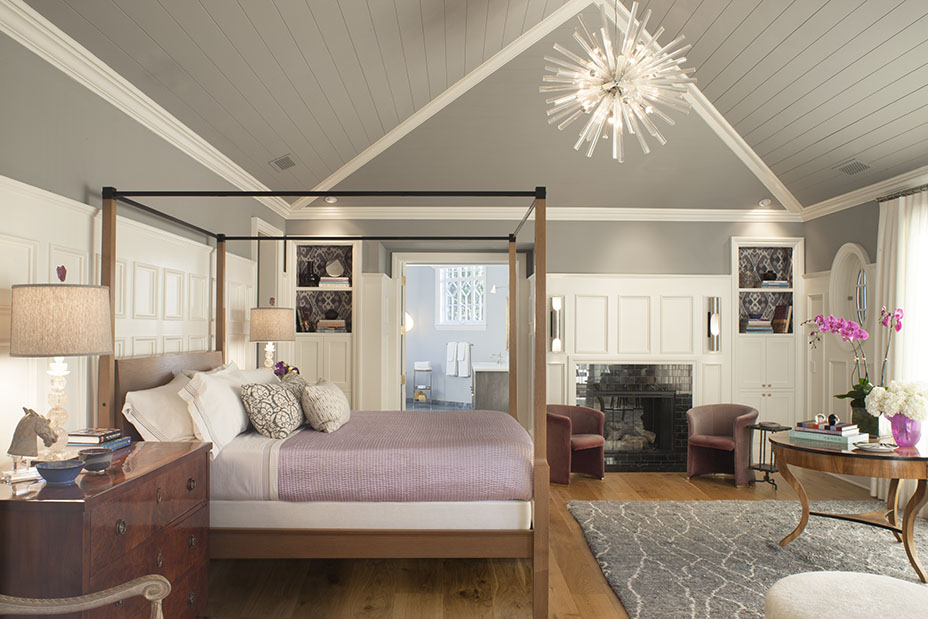 Michael collects wine, so “for him it was a big deal” to have a wine cellar, Haenisch says. “I love the vaulted ceilings and lights that go down the corridor with the Robert Rauschenberg at the end,” says the designer, who has a fondness for the juxtaposition of the traditional corridor with the modern painting. “It makes it feel fresh and young.” (Other artists in their collection include John Baldessari and Mary Corse).

The backyard includes an infinity pool — in which their golden retriever does laps “like Michael Phelps,” Haenisch laughs — with a view of Bel Air. Shannon says they love keeping the sliding doors open in the dining room that leads to the outside for “the real indoor/outdoor California living experience.”

Guests congregate in the dining room or family room if there’s a game on TV — “or, of course, the bar in the living room!” They host Shabbat dinner on most Fridays for four or five families, eating in the dining room with the doors open to the patio and kids’ table.

Says Shannon, “Because the doors are open, there is still a feeling of togetherness.” 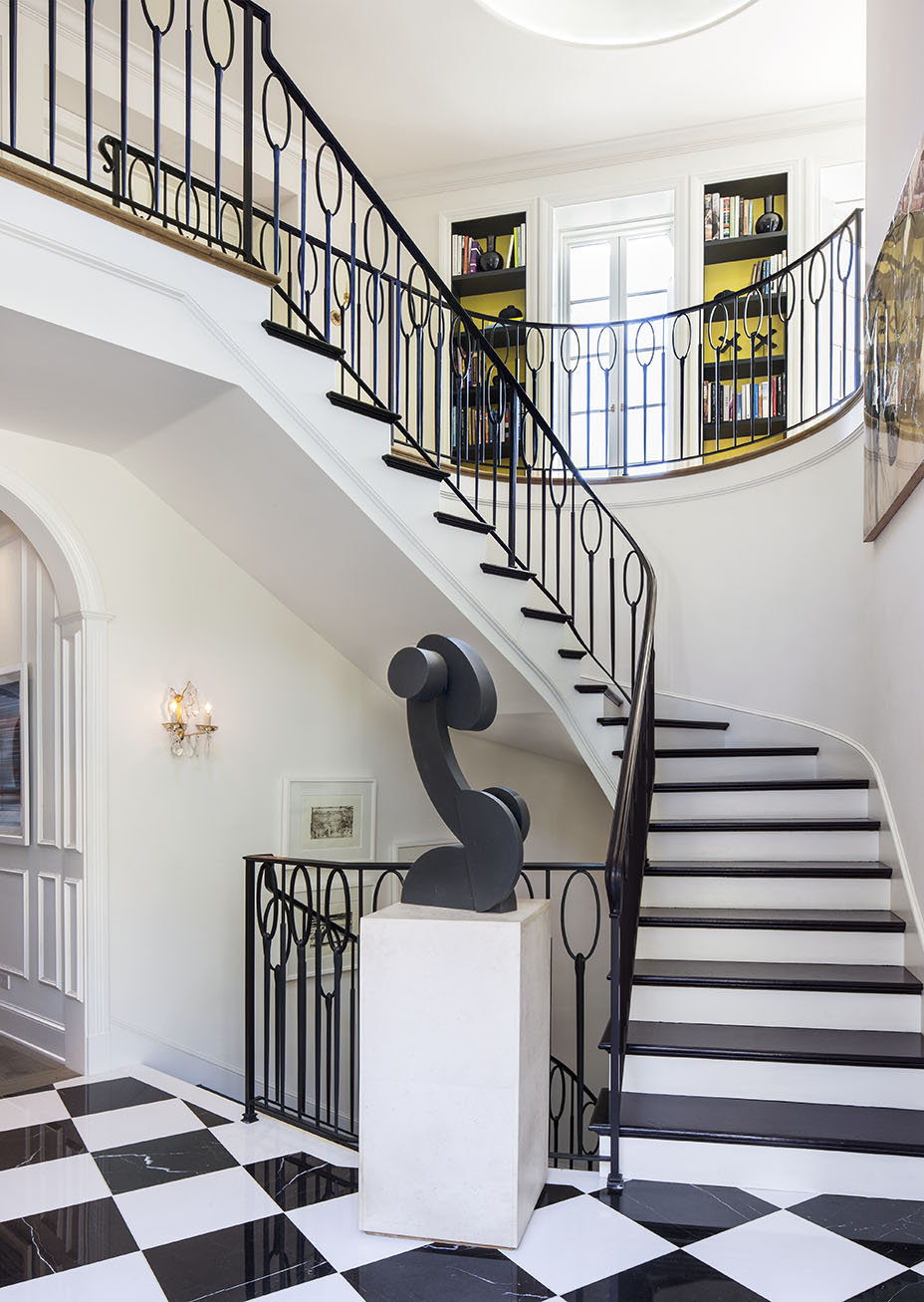 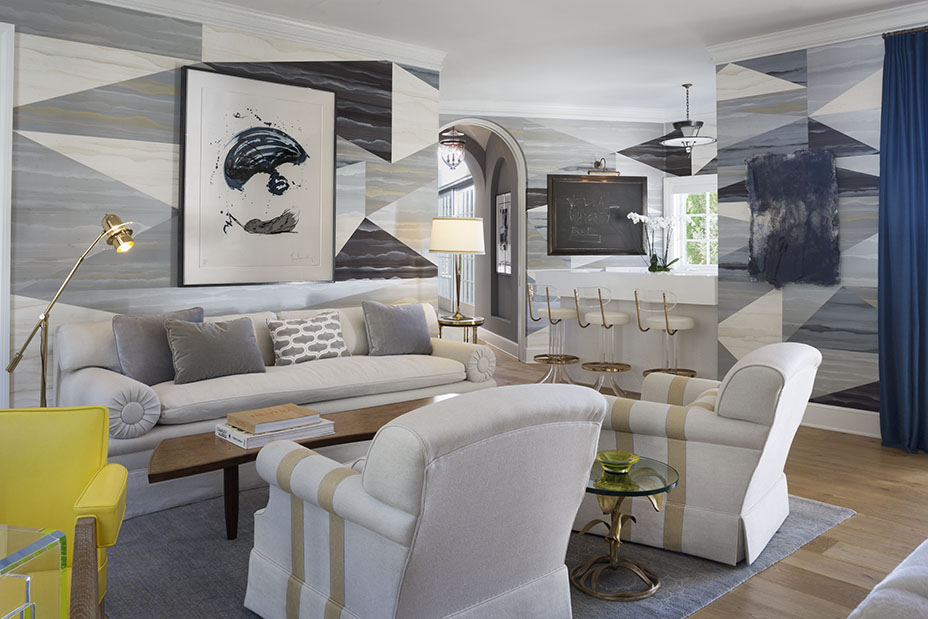