When Paul Newman’s 1968 Oyster Cosmograph Daytona, considered by many experts to be the holy grail of vintage watches, sold for $17.75 million at an Oct. 26 auction, the price shattered records for both a wristwatch and a Rolex. It also vaulted conversations about vintage timepieces to another level. “We’ve since had quite a few people asking?to have their watches appraised,” notes Paul Boutros, head of Americas and senior vp for Phillips, the house that handled the piece — originally a gift to Newman from his wife, Joanne Woodward. “People are looking in sock drawers and safety-deposit boxes and wondering what they have.”

The sale of the watch was undoubtedly driven by the story behind it, a tale of the Newman family. Given to him by wife Joanne Woodward, Newman passed the watch in 1984 to James Cox, at the time the boyfriend of his daughter, Nell. Cox’s decision to sell the sought-after timepiece was spurred by his desire to donate part of the proceeds to Nell Newman’s foundation. “It’s sad that the watch is leaving us, leaving the family and leaving me, because we miss the guy,” Cox said after the auction had concluded. “But now our job is to take that money and do amazing things with it.”

Regardless of sale value, many industry collectors attach strong sentiment to an heirloom watch. Jeff Bridges wears the stainless-steel Rolex Submariner his?father, Lloyd Bridges, wore throughout?his career. Top attorney Joshua Grode of Irell & Manella cherishes an Omega Seamaster that was owned by his grandfather. “He had ?it inscribed and gave it to me when I? was born,” says Grode. Million Dollar Listing‘s Josh Flagg wears his dad’s Rolex Submariner. ICM Partners’ John Burnham has two watches owned by his dad, including a tonneau-shaped Cartier. And when George Clooney became an ambassador for Omega, his father, journalist Nick Clooney, dug up his Omega and gave it to his son to commemorate the event.

Actor Joe Mantegna possesses a vintage Waltham owned by his father. “For many fathers and sons, a watch is a tangible connection,” he says. “My dad died in 1971 at a young age. He was an insurance man, a white-collar job, and punctuality was important to him. That’s what I think of when I look at his watch.”

Women’s watches don’t exert the same pull at auction, as pieces “from the ‘30s through the ‘70s were small and dainty,” says Boutros. “They don’t suit today’s tastes. There’s virtually no market for vintage ladies’ watches except for the occasional exceptional diamond piece.” Cartier’s iconic Tank, which celebrates its 100th anniversary this year, is a notable exception. “I’m the proud owner of my nana’s Tank,” says supermodel Carolyn Murphy. “Cartier also gifted me with a Tank a few years ago that my daughter has her eye on.”

Some A-listers are already passing their vintage watches to the next generation. “My father was given a Longines by his father in 1944 when he graduated from high school, and when I graduated from high school, he gave it to me,” says L.A. defense attorney Mark Geragos, who then passed it on to his college-bound son, Jake. Says Geragos: “I was very proud of him and could have bought him any watch in the world, but the sentimental value of my father’s watch trumped anything I could have bought him.”

What makes heirloom watches so desirable, says producer and watch collector Marc Berliner, is that “every one of them, no matter what its monetary value may be, has a backstory. However, when an heirloom watch once belonged to a famous person, whether it be a star from the Golden Age of Hollywood, or a famous artist like Andy Warhol, it becomes even more special. Watches with celebrity provenance represent a highly personal connection to artists, actors, writers and directors whose work has stood the test of time, especially when you consider that such watches were worn by their famous owners for many, many years and often photographed frequently.” For owners that think they may have a a valuable vintage piece, Berliner recommends going on eBay plus the websites of the top auction houses to get a ballpark estimate of its worth. “Keep in mind this is only useful for a ballpark value,” he says. “There are many factors that determine the value of a pre-owned watch, such as rarity, condition, current market demand and whether or not the watch has its original accessories including box and papers. There are also many specific factors — such as whether the dial of a vintage Rolex sports watch has faded and become tropical, or whether a dial is a certain color (black dials, for example, are almost always more valuable) — that can increase or decrease the value of an inherited watch by thousands or even tens of thousands of dollars. If you think you have a valuable timepiece, my advice is to first bring it to a major auction house like Christies, Phillips or Sotheby’s for an in-person evaluation by one of their specialists. Auction houses do not purchase watches, so they have no incentive to undervalue your timepiece.”

What would it take for collectors to part with sentiment and take a big payout? “That would be like selling?a body part,” Mantegna says of his father’s Waltham. Geragos, who kept a close eye on the Paul Newman auction, agrees — almost. “If my father’s Longines ever became worth $1 million, I’d consider it,” he jokes.

Now that Paul Newman’s Rolex is officially off the market, is there another vintage, celebrity-owned timepiece that could draw similar interest? Possibly. As it turns out, there is a second Rolex Daytona with similar auction potential, also once owned by the late screen icon and now in the hands of his youngest daughter, Clea, 52. This second Daytona, a Model 6263 Big Red, was presented to Newman by his wife Joanne Woodward in the early 1980s.

The watch, inscribed on the back with the words “Drive slowly. Joanne,” appears on the cover of a new book, A Man and His Watch (Artisan, $35). But its author, Matt Hranek — whom Clea allowed to photograph it exclusively — doesn’t expect she will sell it: “She said to me, ‘Pop wore this watch every day. … I wear this every day as he did and I don’t care what it’s worth, outside that it’s my connection to him.” That’s the way it is. 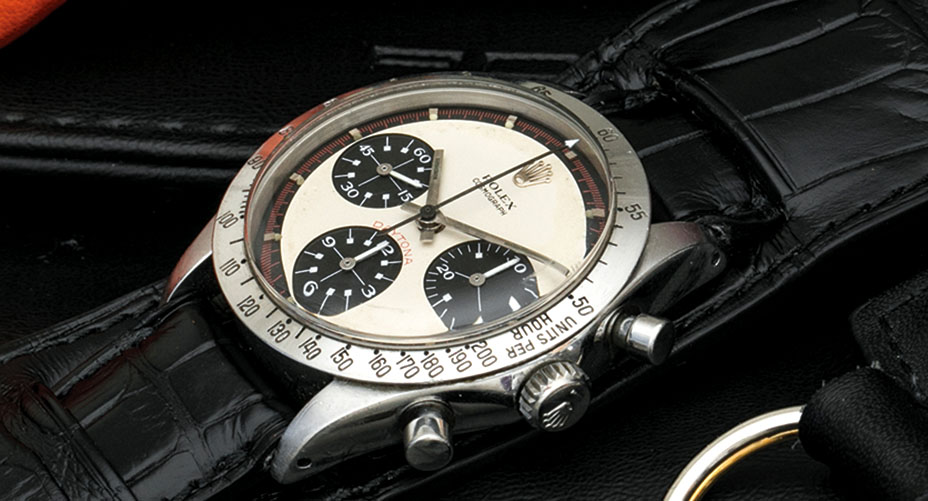