Buy a timepiece because you love it, not because you think it will increase in value ­­— or so goes the typical advice to new watch collectors. But these days, when Paul Newman’s Rolex Daytona sells for more than $17 million and some nearly new watches are being resold for $10,000 to $20,000 more than retail, watch lovers might be forgiven for dreaming a bit more about investment value. Film producer and collector Marc Berliner calls some of the run-ups in prices “insane.” He points to Patek Philippe’s steel Nautilus 5711/1A. While it retails for roughly $25,000, a pre-owned one “sold at Christie’s for $47,500.”

Timepieces like the Nautilus — which are extremely hard to get (Patek requires that buyers apply to purchase its watches) — are exceptions. Most watches begin depreciating the second they exit the store. “In a best-case scenario, some watches become collectible and begin regaining value,” says James Lamdin, founder of online vintage watch boutique Analog/Shift.

Today, three Swiss luxury watch brands rule the secondary market: Rolex, Audemars Piguet and Patek Philippe, all of which tightly control supply of their most desired models. Rolex’s steel Daytonas with ceramic bezels — which debuted in 2016 and are almost impossible to acquire unless you are a favored customer (“Forget about it, you can’t get one,” says Lamdin) — now trade secondhand at $10,000 above the retail list price of $12,400.

But don’t think just any Rolex will rise in price. “It’s a total myth that Rolexes don’t depreciate,” says Lamdin. What’s critical is that it be a special model that isn’t over-produced. Among the standouts seen at the 2018 watch fairs in Geneva and Basel this year are Rolex’s new GMT- Master II in a red and blue colorway known as “Pepsi” (Ellen DeGeneres owns a vintage example), priced at around $9,300 in steel. “I could see that selling for $20,000 to $25,000 easily in the next two to three years,” says Hamilton Powell, founder of certified luxury watch marketplace Crown and Caliber. Lamdin thinks the pricey new Patek Philippe Perpetual Calendar Chronograph with a salmon dial (around $174,000) is a sure bet, while Tim Mosso, media director of pre-owned seller WatchBox, sees a rosy future for Audemars‘ $34,800 Royal Oak Extra Thin (Ref. 15202IP), which is limited to 250 pieces and has a blue dial in a titanium and platinum case. “Clear winners have emerged in the form of new watches most likely to spawn dealer waitlists, strong secondary market demand, and potential “long-term value retention,” says Mosso. 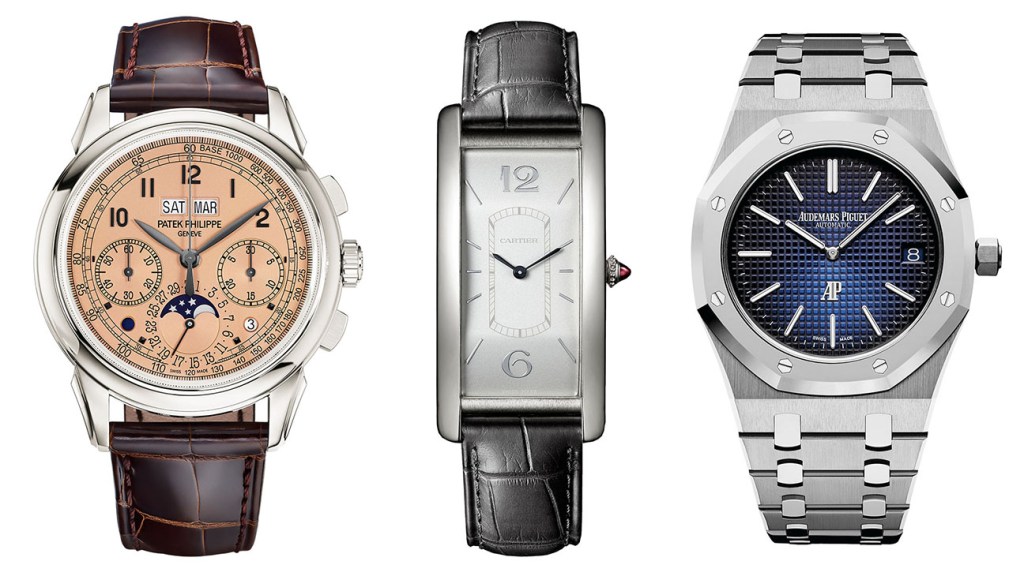 Other hot 2018 models recommended by dealers include Omega’s limited-edition Seamaster Diver in titanium and tantalum ($13,000) and Tudor’s Black Bay GMT with its own “Pepsi” bezel and a steel bracelet ($3,900). “We think Tudor is going in the right direction,” says Powell, who adds the number two most-searched term on the Crown and Caliber site (after Daytona) is Tudor. He’s bullish on Omega due to the fact that its 2015 “Snoopy” Speedmaster Apollo 13 watch, which retailed for $7,350, is now going for $16,000 to $20,000. “Their ‘Dark Side of the Moon’ Speedmasters are holding really well right now too,” he says.

Lamdin is a fan of Cartier’s limited-edition Tank Cintree in platinum ($23,500). “We’re sort of at the very tail end of 15 or even 20 years of infatuation with large watches and tastes are expanding. People are looking at more classic designs and thinner executions,” says Lamdin, who also has seen that Jaeger-LeCoultre’s Tribute watches (such as its recent Tribute Reversos) perform well on the secondary market.

When buying with an eye on investment, Powell recommends avoiding watches with diamonds or expensive complications such as tourbillons. One area to watch is the realm of small independent master watchmakers such as Laurent Ferrier (Hidden Figures actor Aldis Hodge is a fan of its new Galet Annual Calendar), English brand Bremont, MB&F, Gronefeld, Romain Gauthier, Greubel Forsey, Urwerk, Richard Mille and Lang & Heyne. “Romain Gauthier and Gronefeld are two that I have sold recently at close to full retail,” says Stephen Hallock of Tick Tocking, an L.A.-based company that specializes in selling pieces from indie brands. Adds Hodge: “I think what makes a watch collectible is when it has artistic and aesthetic value, pedigree, uniqueness, and rarity in terms of composition and functionality.”

For an example of how a model from a boutique brand can skyrocket in price, Berliner cites the case of Philippe Dufour, whose Simplicity watch from around 2003 now sells for near a quarter-million dollars. Original price: around $45,000.

“There feels like a lot of speculation right now,” says Berliner of the crazy resale market. WatchBox’s Mosso even wonders whether a “Rolex Daytona bubble” exists right now. “As with all asset classes, luxury watches become subject to excessive speculator attention as soon as perceived returns grow large enough. Some of these sellers will be industry regulars with long histories in the luxury watch space; many will be jewelers and eBay flippers who chase value. If you’re inclined to buy cryptocurrency, Tesla stock, bonds based on student loan remittances, and watches to flip, the current Daytona surge might be for you.”

And if you place your money on the right piece, you might just get lucky.

How to Upgrade a Vintage Watch With a Custom Leather Strap

A version of this story first appeared in the April 4 issue of The Hollywood Reporter magazine. To receive the magazine, click here to subscribe.