Santa, the Queen of England, a giant koala, the Statue of Liberty, men in grass skirts (and only grass skirts), a Mountie, baton twirlers, flags of every nation on the planet and more cameras microphones and lights than I could count. Hardly anything to blink at in Hollywood. But on the main street of Manchester, Vermont, (population 4,391) where fly fishing and cow counting are some of the more serious sports pursuits? Surreal.

When I first heard the news, I assumed it was a joke. The idea that ABC’s The Bachelor would be filming in our tiny town seemed impossible. The closest airport is an hour away. We have just two stoplights in town. But this was the real deal. The Bachelor: Winter Games, the franchise’s upcoming spinoff show that reportedly will feature sports challenges of various kinds and is open to all past contestants, was coming to my bucolic corner of the Green Mountain State.

My guilty pleasure, my repulsion attraction, the show I loved to hate (or hated to love) would be filming something just four blocks from my house and I desperately wanted to be in on the action. When the call came out for extras, I headed down to register ASAP.

The fanfare began when a massive stage was erected in the center of town. Main Street would be blocked off to traffic for all of Monday and Tuesday, Dec. 4 and 5. How was this all going to work in Manchester, whose biggest claims to fame are the American Museum of Fly Fishing and Hildene, the former estate of Abraham Lincoln’s son Robert Todd Lincoln?

Several of my friends and I registered as official extras, eager to make our television debut. None of us knew what to expect. What should we wear? How long would we be needed? Would we be on camera? And most importantly, would we meet Chris Harrison? Or ESPN’s Hannah Storm, who series creator Mike Fleiss tweeted will also be part of the show?

The great @HannahStormESPN is bringing her journalistic excellence to #TheBachelor Winter Games!!!

In the days leading up to filming, the weather forecast was looking increasingly sketchy. December in Vermont is generally quite cold, and there’s usually snow, but this day was looking unseasonably warm and rainy. So was that it? Were my hopes of becoming a TV darling going to be dashed?

As it turns out, crews have this stuff down to a science. The rain wasn’t supposed to start until later in the day so filming was simply pushed up a few hours.

I didn’t sleep a wink the night before filming because I was so excited. Waking early, I bundled up. I’d been told that we would be filming outdoors and it would be several hours of standing and waiting. Phone charged, coffee in hand, Chapstick applied, off I went in pursuit of my big break on The Bachelor.

Town was buzzing. In front of the Manchester Country Store on Main Street (Pure Vermont Maple Syrup for sale here!) were cameras, microphones, lights, flags and a cast of characters very different from the typical flannel-shirted townspeople I see every day. Flags of different nations were hastily being distributed to the crowds. We were herded here, then ordered to gather there. People were dishing on who’d seen Trista and Ryan at the coffee shop and wasn’t Ben Higgins just adorbs? A beautiful, very professional woman worked the crowd. She was flawlessly made up. After a while, Chris Harrison emerged and was gracious and friendly posing for photos with nearly everyone who pleaded. 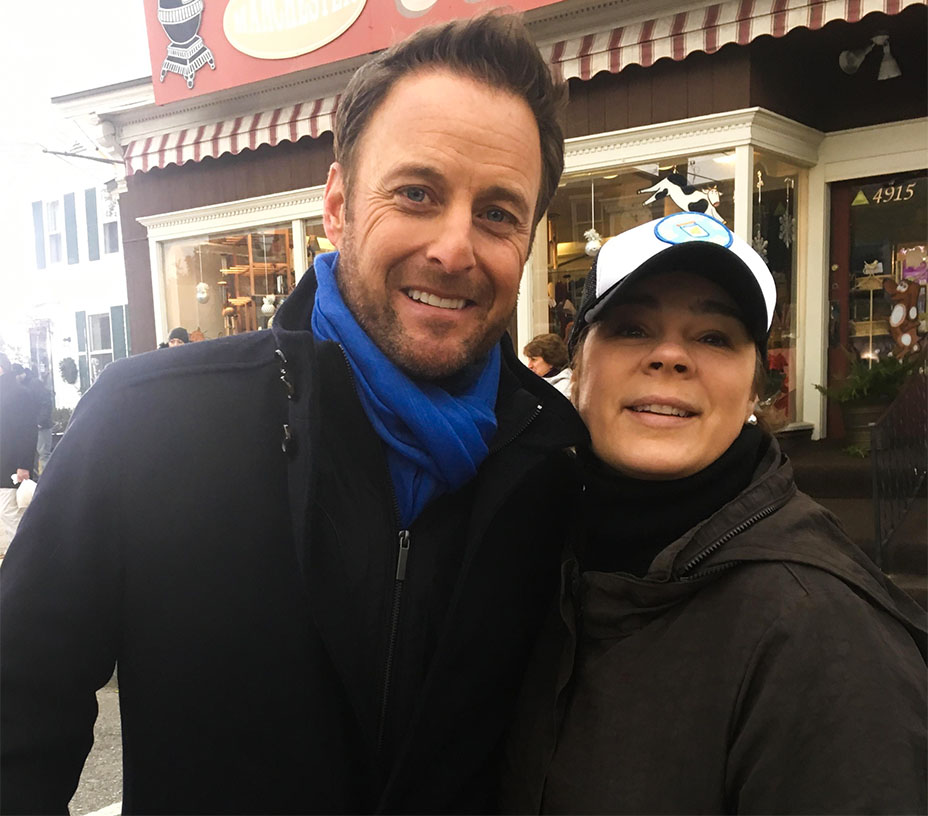 We waved our flags, cheered, and chanted “U-S-A, U-S-A” until we were hoarse. It was all a setup for the official kickoff to the Winter Games, with the torch passed by Trista and Ryan. There was a deluge of confetti and cheering. Then as if on cue, the wind picked up and rain was imminent. Just as I was begining to lose feeling in my feet, filming wrapped and the Hollywood fantasy was over.

Our town would soon return to its quiet normal. The sidewalks would be rolled up and Main Street reopened to traffic. I began the short walk home, cheeks hurting from grinning. Who needs a rose?