Stella McCartney tapped Idris Elba to create a moving video to raise awareness for breast cancer after both OBE-awarded artists lost a parent to the disease.

On Monday, the British designer launched a video called All Is Love starring Elba as part of her campaign. The actor narrates the solemn and poetic video about breast cancer, with images of female cancer survivors and their bodies — scars and all — as he says, “Praise to the power that cancer could not take.”

Along with the video, McCartney announced the creation of Stella McCartney Cares, a U.K. charity that will support awareness of the cause, which is near and dear to the designer. (Her mother, Linda Louise McCartney, died of breast cancer in 1998.) As part of the project, she will donate 1,000 post-operative mastectomy compression bras, called the “Louise Listening” style, named after her mother.

“The reason I designed the Louise Listening bra is my experience of seeing someone that I loved go through such a traumatizing operation, a mastectomy,” McCartney said. She found that available mastectomy bras weren’t feminine enough, and wearers lost a “sense of who they were as a woman,” inspiring her to create a bra in 2015 that “celebrates the power” of womanhood. 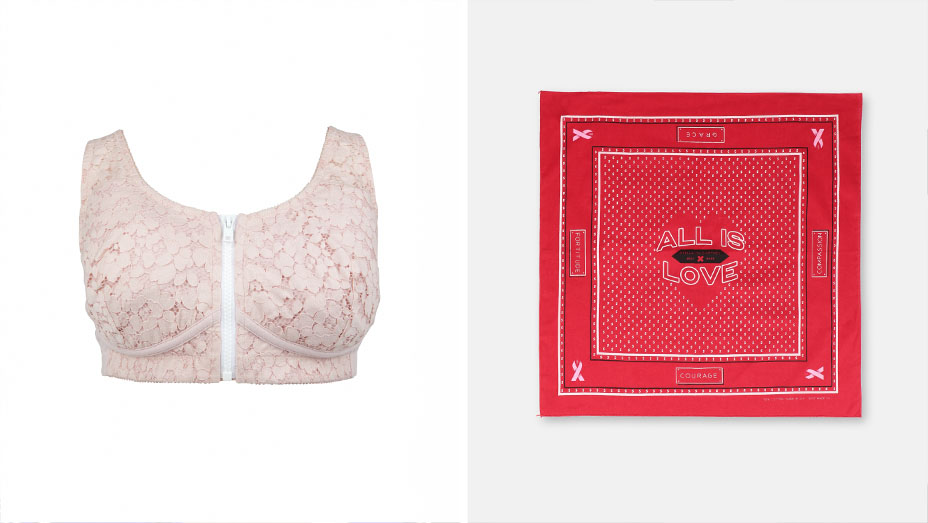 The cause is also personal to Elba, who revealed he lost his father to cancer five years ago. He said, “Removing the taboo around men talking about breast cancer and encouraging other men to talk about with their wives, mothers, sisters is something you don’t often see or hear about, but it should be.” The actor encourages men to help women in their lives get checkups.

To correspond to the film, McCartney released an “All Is Love” limited edition bandana with Best Made Co. ($95), which benefits the Linda McCartney Centre in Liverpool, England; the Hello Beautiful Foundation in London; and Memorial Sloane Kettering in the U.S. The red cotton bandana features the words “grace,” “compassion,” “courage” and “fortitude” along with the symbolic pink ribbons.

Last month, McCartney named Sofia Vergara as a face of her cancer campaign, and the Modern Family actress modeled lingerie from the Fall/ Winter 2018 collection. With the new Stella McCartney Cares Pink, the fashion designer will continue to work with hospitals and charities to increase education about the disease. See the video, below.