Where do certain members of Hollywood and the fashion industry turn when they need wisdom? It’s not always their therapist. In fact for some, such as Donna Karan, Priyanka Chopra, Dierks Bentley, Amy Smart and Moby (not to mention all the biggest Bollywood stars), it’s the most watched guru in the history of YouTube, Sadhguru, whose Inner Engineering: A Yogi’s Guide to Joy hit the New York Times best-seller list when it debuted in 2016.

As his moniker would suggest, the yogi, visionary and mystic, who visited L.A. last week, appearing at the Ryan Gordy Foundation celebrity golf tournament, among other events, thrives on introspective insights and putting things in perspective. On the latter, when asked about his high-profile clientele, he says simply, “My interest is human beings. What their professions are doesn’t matter.” Still, he recently taught Ozzy Osbourne to meditate and, an avid motorcycle rider, plans to appear on Norman Reedus’ Ride series at some point. Coincidentally, he looks the part of a yogi guru in a turban and flowing white beard, but somehow is equally comfortable dressed in dungarees on a BMW bike.

Sadhguru has organized a campaign in India called Rally for Rivers, to revive the country’s dying rivers, that saw 129 million people participate. He’s given a TED talk and has spoken at Harvard, Yale, Stanford, MIT and other major American institutions, so he’s familiar with problems plaguing both East and West.

When it comes to an issue top of mind for many Americans — the idea that our country is in turmoil, and full of anger, resentment and horror, most recently exhibited in the spate of terrorist bombs sent to political figures and media outlets on Wednesday, he calmly offers a different opinion.

To Sadhguru, people who have the privilege of being in positions of power that impact millions — whether in business, politics or even the movie industry — have a basic responsibility to manage how they think, feel and act. Of course, not everyone would agree that all are doing so. Still, he feels that in America right now we’re quick to disapprove and protest unless our viewpoint wins. “I think that’s a dangerous trend, because the significance of the democratic process is, this is the first time in the history of humanity that major power shift happens without bloodshed. This is what democracy means.” He feels we need to give people who are elected an opportunity before we judge. In other words, don’t be sore losers.

Sadhguru does not give advice for how to meditate or breathe one’s way to contentment. (Side note: These practices have been commoditized, in his view.) Instead he prescribes an attitude adjustment — but way deeper. That’s because, he says, one’s inner peace and joy have nothing to do with what’s happening in the world around us. “It’s very important that human beings learn that human experience — whatever we experience, joy or misery — comes from within us. It’s really important that our intelligence functions for us. Being miserable, being in a disturbed state, essentially means our intelligence has turned against us, and once that happens there’s no way out.” 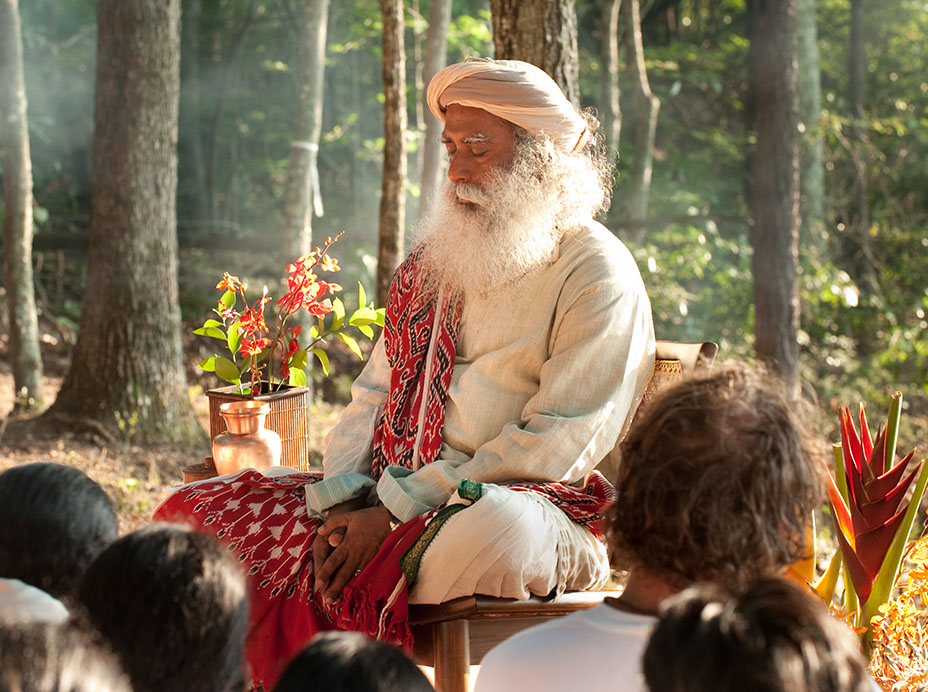 In order to master this inner peace, Sadhguru and his many disciples offer lessons — through his book and Isha Foundation, whose ashram Karan has visited. “Essentially what we’re trying to do is bring awareness to how your body, your mind, your energy functions, and how you can take charge of it.” Ancient Eastern education addressed this before all else, but currently schools are dedicated to heaping information without any attention to the human being, he says.

What Sadhguru is trying to cultivate is a simple method with which you create a joyful chemistry within yourself. Then, he says, “No matter what happens around you there is a certain pleasantness within you that can’t be taken away. Because if someone else can decide what happens within you, isn’t that a form of slavery? We have the highest level of comfort and convenience compared to every generation in the history of this planet, and still we cannot stop complaining.”

Even though to Sadhguru meditation has been misconstrued — “meditation is not an act; it’s a quality,” he says, “If you cultivate the body, mind, emotion and energy to a certain level, to become meditative is a consequence” — it does come into play, as does yoga. “We’re always trying to get the consequence without the process.” Those seeking a quick fix to their angst will not find it with Sadhguru. In this case the old “the journey is the destination” is far truer.

For those who want a taste, there are guided sessions via an app (and YouTube), but after that you will have to go into a properly transmitted process called Isha Kriya, which probably 70 million to 200 million people on the planet are practicing right now, he says. With time, that meditative quality can be attained even while driving through Beverly Hills at 5 p.m.

Beyond Isha Kriya, Sadhguru’s call to action is this: “Is economics the only single point of importance to our lives, or are there other values and other dimensions or life that are significant to us? This is something the American people have to decide now.”

His focus on the United States of late is a response to the country’s massive influence. Says Sadhguru, “If America genuinely meditates, I think there’s a better chance to get the world to meditate.” And then, he says, the fear of suffering that rules so many will go away. “Only then you walk in full stride, and explore every dimension of what it means to be human.”