Architect Lloyd Wright’s (yes, the son of the legendary Frank Lloyd Wright) Sowden House is once again in the spotlight in the TNT series I Am the Night that debuts on Monday, January 28. (Fans may remember it as the home of Howard Hughes in Martin Scorsese’s 2004 The Aviator).

Inspired by a true story, the TNT six-part series depicts the tale of the teenager Fauna Hodel (India Eisley) who travels to mid-’60s Los Angeles in search of her past after discovering she was given away at birth. Her investigation, with the help of fallen newspaper reporter Jay Singletary (Chris Pine), leads her to the sinister Hollywood gynecologist George Hodel (Jefferson Mays), who was the subject of the unsolved murder of the Black Dahlia (Elizabeth Short) in 1947.

Infamous for its distinctive architecture and sordid history, it’s only fitting that some of the filming takes place at Hodel’s actual 1945 home of Sowden House.

'I Am the Night': TV Review

Designed in 1926 for retired artist John Sowden and his wife Ruth, the Mayan Revival-style home is unique with its sand-colored textile concrete construction depicting harvests and sun clouds (which drew praise from his father), and an open rectangular 6,000 square-foot floor plan with four wings looking out on an alluring central courtyard.

Perhaps the real showstopper is the front entrance, with its almost menacing entryway that some say feels like the mouth of a shark (hence the nickname “Jaws House”). Production designer Julie Berghoff notes of the temple-like Franklin Avenue residence, “Sowden feels like a Mayan tomb. When you walk up the stairs, it’s like walking into the mouth.” 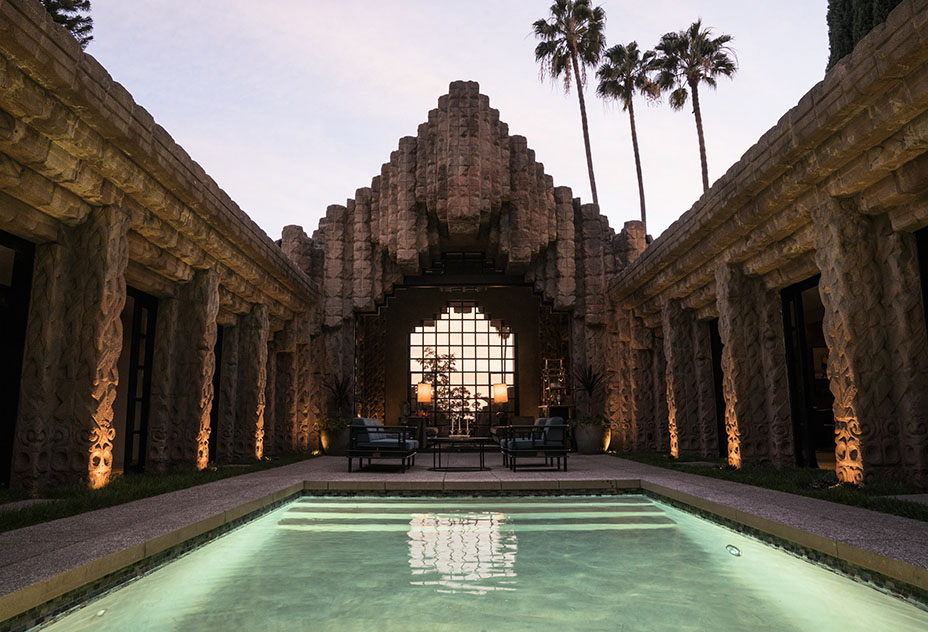 Berghoff, who created the dystopian designs for The Handmaid’s Tale, knows a thing or two about horror, as her first feature was the 2004 thriller Saw. “I read the script and fell in love with the idea as I love the horror genre, the dark, nostalgic background and the mystery of the true story,” she notes. “Sowden has a crazy energy and feels like a breathing entity. I looked at how it was preserved and wanted to keep the integrity of the furnishings.”

Creating an eerie tension was achieved not only through the general vibe of the house itself (legend has it that Smart and a secretary’s murder took place in the basement) along with covering up the modern elements with drapery to make it “moody, mysterious and shadowy.”

The designer looked to the designs of Los Angeles in the ’60s and the surrealist art movement in L.A. for inspiration, as Hodel was also a painter. Working with set decorators Nancy Nye (Gattica) and Sophie Neudorfer (The Handmaid’s Tale), they scoured rental shops and researched eBay for period-specific items such as toothpaste, hair curlers and straighteners. “We are always looking for the right piece that expresses each character. We are like little treasure hunters!” 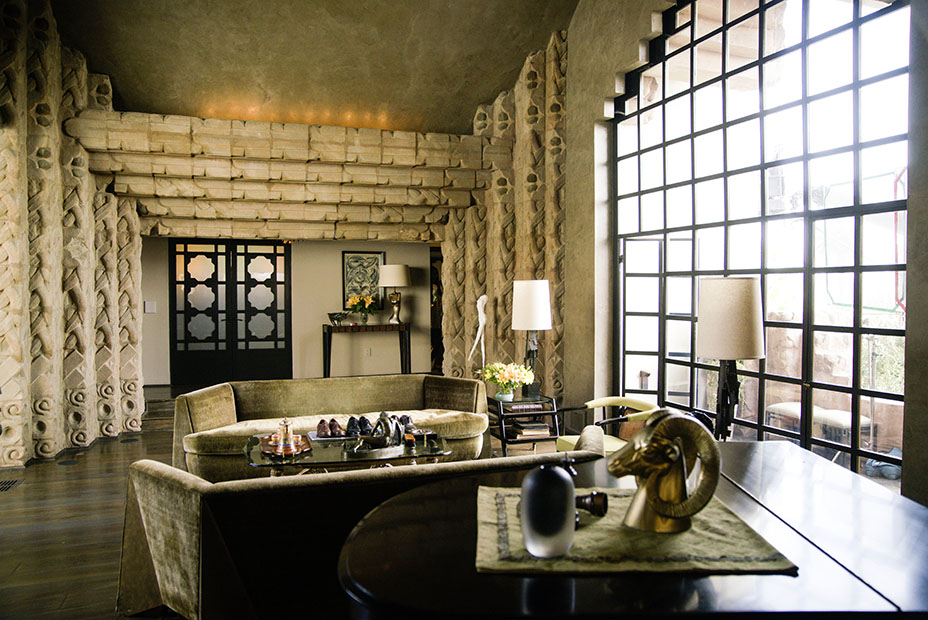 The house’s owners (there have been 10 in all), Dan Goldfarb and his wife Jenny Landers, live in the space that serves as part home and part social and performance venue (such as listening parties for the Suspiria soundtrack and the Icelandic band Sigur Rós) in addition to non-profit events (wildlife, canine and cannabis education fundraisers), film, magazine and television shoots (weddings are off-limits).

It’s no wonder that the house is acoustically ideal for performances, as Wright designed the Hollywood Bowl. The events are all about giving back, promoting the arts and, as Landers notes, “This house has this crazy history and we wanted to utilize it in a positive way and share it with the community.”

When Goldfarb first learned the house was up for sale in 2017 (with a 4.7 million price tag), he had never been to Los Angeles in his life. “Someone sent me the listing for the house and I was immediately attracted and drawn to it,” notes the native New Yorker who made his fortune with the natural hemp pet products Canna-Pet (thanks in large part to their Persian cat Mariano, who was ill and in need of alternative medicine).

Given Sowden’s infamous storied past, do the owners feel it’s haunted? “From the outside of the house, you cannot tell what is going on; it looks like a fortress. On the inside, it’s a whole other world, and the few people who get to see it feel how tranquil it is. But at night, with the fire going and the vibes, I can see how it could feel scary for some people,” says Goldfarb.

If there truly are spirits, the four-legged residents of the enigmatic house don’t seem to mind, as Landers explains, “We have these amazing Persian cats and if any bad spirits arrive, they would keep them at bay. We feel like it’s a very peaceful place.”