Cardinal Timothy Dolan’s oversized gold cross easily was the most envied accessory at this morning’s preview of “Heavenly Bodies: Fashion and the Catholic Imagination.” With the intersection of fashion and religion as the key theme of this year’s Costume Institute exhibition at the Metropolitan Museum of Art, jewelry publicists all over town are bemoaning the lack of crosses to adorn the A-listers attending tonight’s Met Gala.

But before any outrage kicks in over a museum portraying religion as fashion, know that the beloved archbishop of New York is fully on board with the concept. “In the Catholic imagination, truth, goodness and the beauty of God is reflected all over the place, even in fashion,” Dolan said. “The world is shot through with his glory and his presence. That’s why I’m here, and that’s why the church is here.” 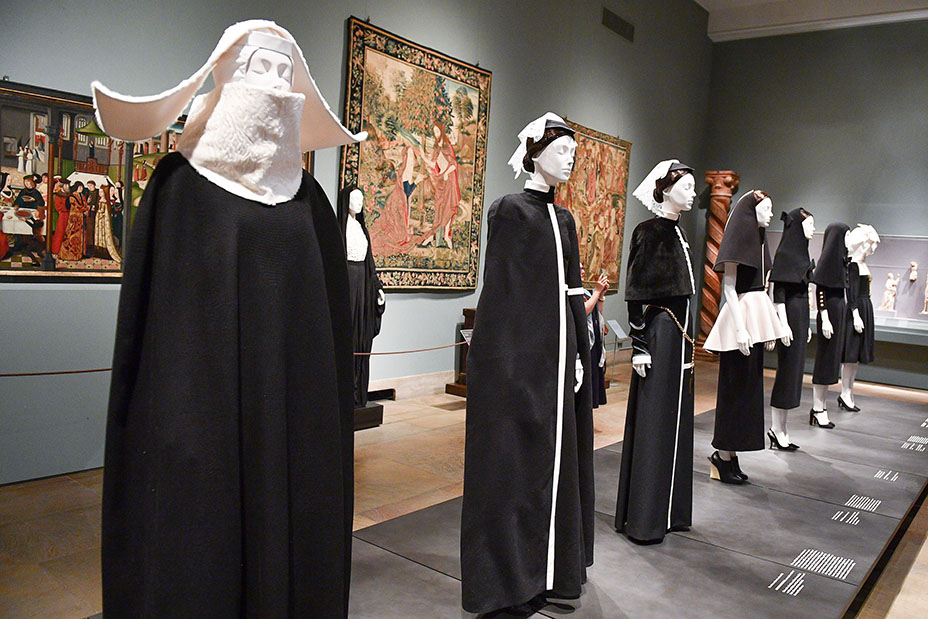 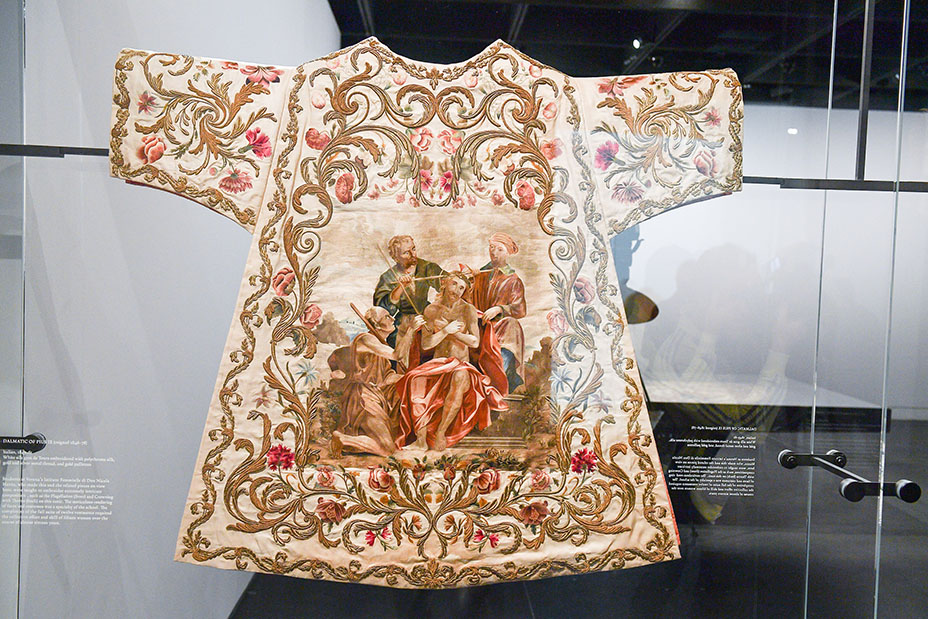 “Heavenly Bodies” is the largest Costume Institute exhibition in the museum’s history, spanning 25 galleries and 60,000 square feet, split between the Fifth Avenue museum and The Cloisters museum uptown in Fort Tryon Park. “In order to see this exhibition, one has to embark on a bit of a pilgrimage, which we think is just great,” said Daniel Weiss, president and CEO of the Met.

Most designers featured in the exhbit are known for exploring religion – and Catholicism in particular – consistently in their work. Versace is an exhibition sponsor, and several pieces by Donatella (who was also present at Monday morning’s preview) and Gianni are seen throughout the museum’s spaces, from a 1997 wedding ensemble Gianni crafted for his final haute couture collection to a leather jacket emblazoned with crosses that Donatella designed for the label’s spring-summer 2018 collection. 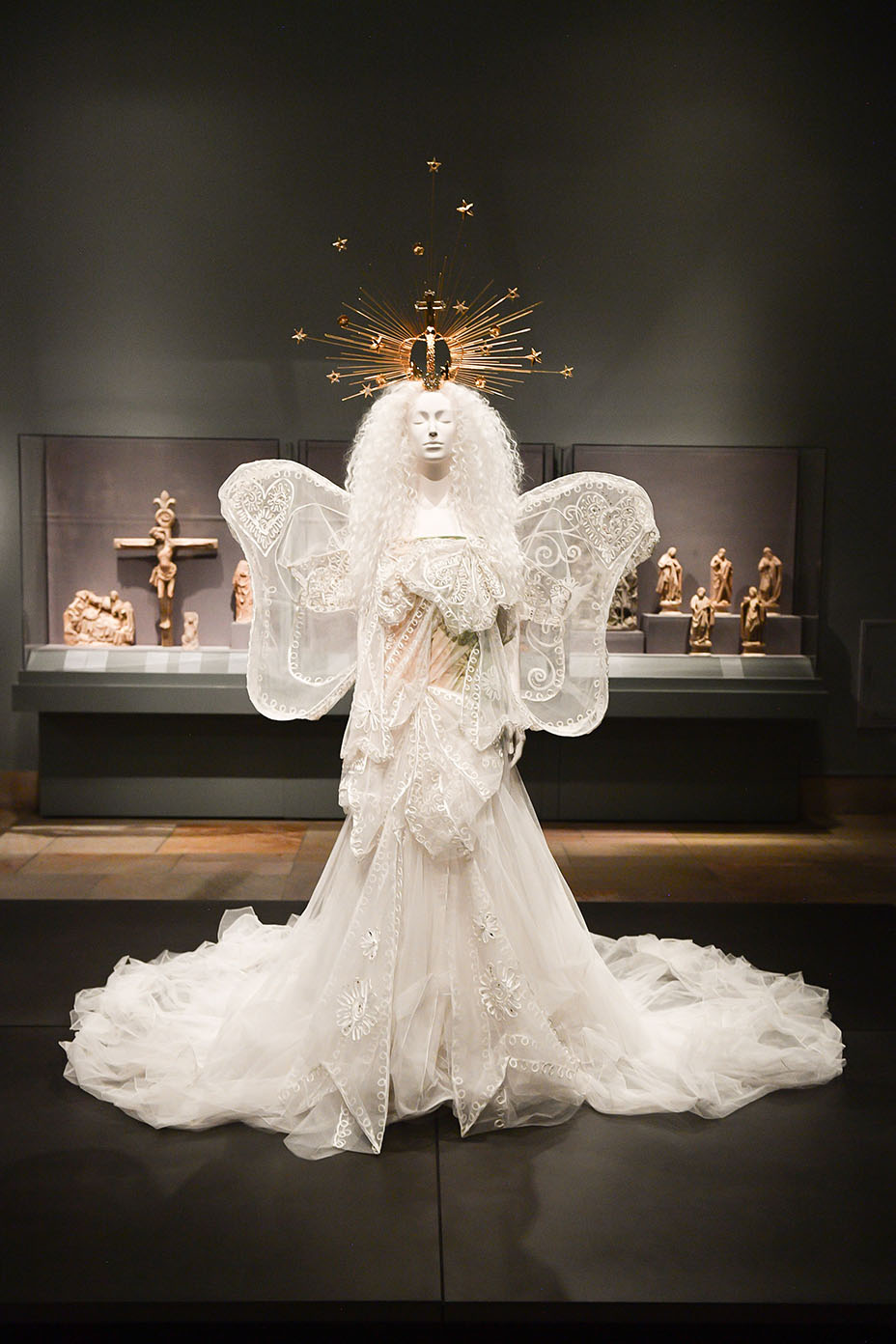 An evening jacket Gianni created for his 1991 fall-winter collection is set against a quartet of Byzantine panels from the 15th century. “Costumes are situated alongside religious artifacts to provide an interpretive context of how fashion engages with Catholicism,” explained Andrew Bolton, the exhibition’s curator. 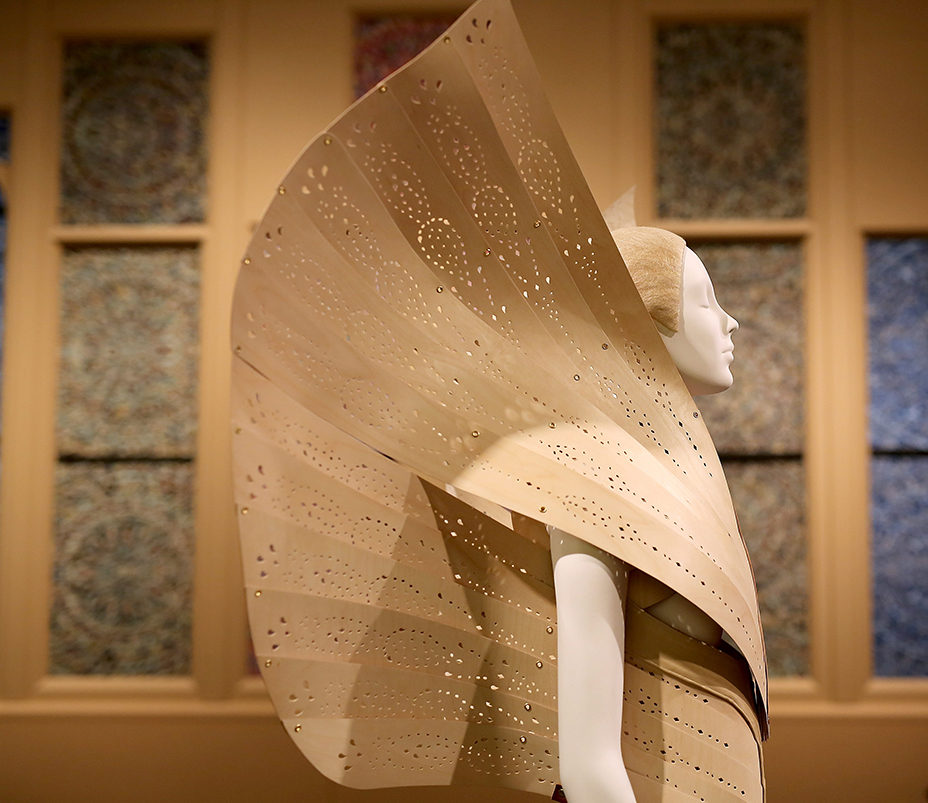 Bolton and the Met staff worked with the Vatican to secure 40 papal vestments dating from the late 18th to early 20th centuries, each rich with intricate gold embroidery and on display in the museum’s Anna Wintour Costume Center. (Wintour also was present at this morning’s preview, wearing a dress of pale gold eyelash fringe – a subtle nod, perhaps, to the theme?) But the most dramatic of all the exhibition spaces is the museum’s Medieval Hall: Opulent gowns by Alexander McQueen, Christian Lacroix, Dolce & Gabbana, Givenchy, Cristobal Balenciaga and Dior from the John Galliano years are surrounded by statues of saints, stained-glass windows and other religious symbols.

The Medieval Hall at the @MetMuseum is quite the wow, do not miss it; the gown with angel wings seen here is by Thierry Mugler … #MetHeavenlyBodies pic.twitter.com/alwPD1kWSJ

Valentino creative director Pierpaolo Piccioli also was among the press and museum VIPs touring the preview, which features several pieces from the Italian label, including a red taffeta gown from Piccioli’s fall-winter 2017 haute couture collection. “For me it’s an emotional exhibition, not only because it’s beautiful and interesting in terms of fashion, but it touches me in a personal way,” he said. “Being Italian, Catholic influences are always present in my work. The idea of Catholicism and fashion is very close: In Catholicism, the clothes are always an expression of something else, and in fashion, we dress to express ourselves, to express emotions. The metaphor feels right.” 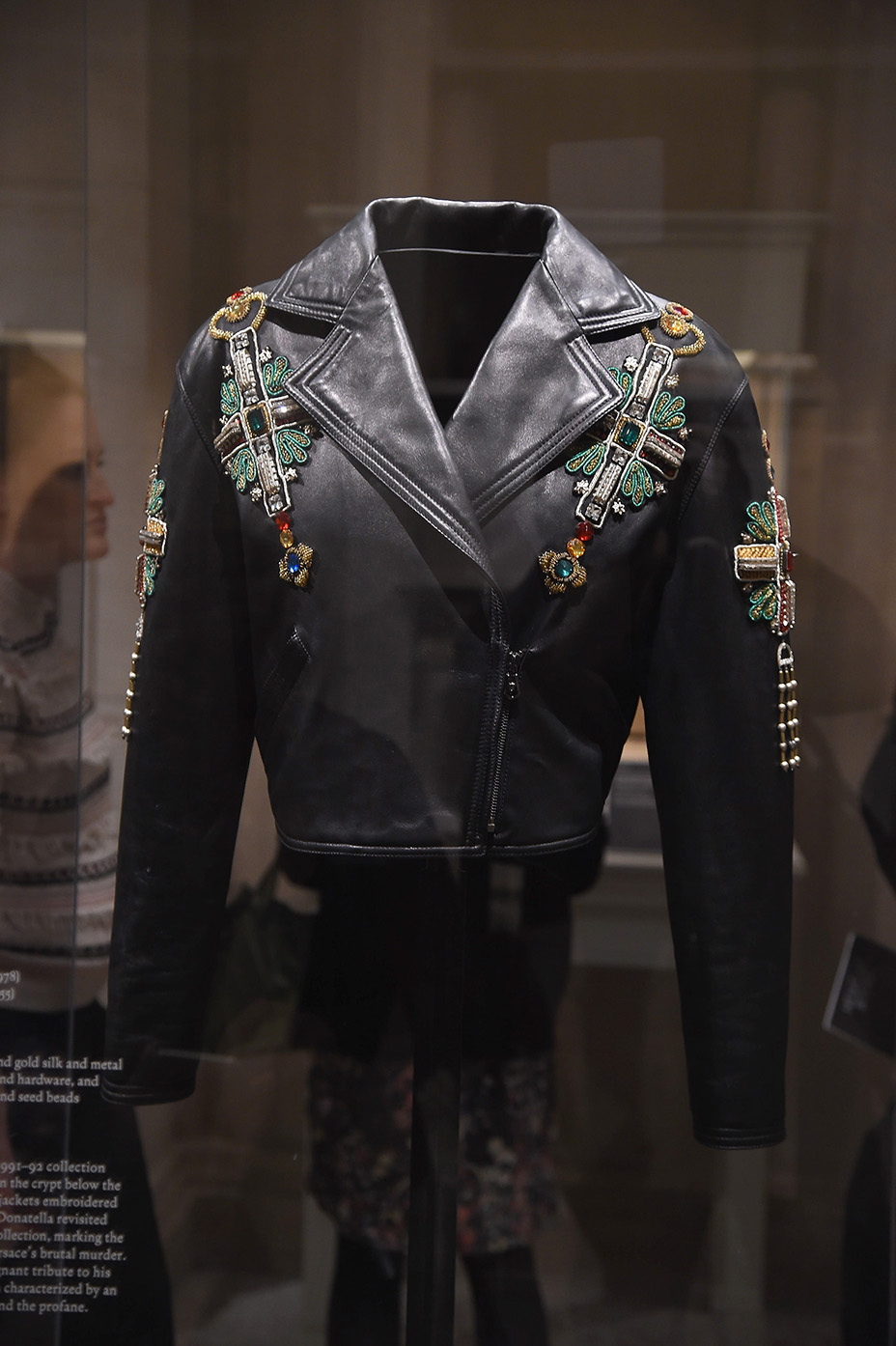 Considering the theme, how might Piccioli dress for tonight’s Met Gala? “I have no idea – I’ll probably decide a half-hour before,” he said. “I’ve been too busy planning what our guests will wear.” He demurred on who would attend with him this year; Jennifer Lopez, in pale blue Valentino, was on his arm as they ascended the museum steps at last year’s gala; Alex Rodriguez, at the time Lopez’s brand-new boyfriend, followed closely behind, wearing Tom Ford.

“Heavenly Bodies: Fashion and the Catholic Imagination” runs May 10 through Oct. 8 at the Metropolitan Museum of Art in New York.